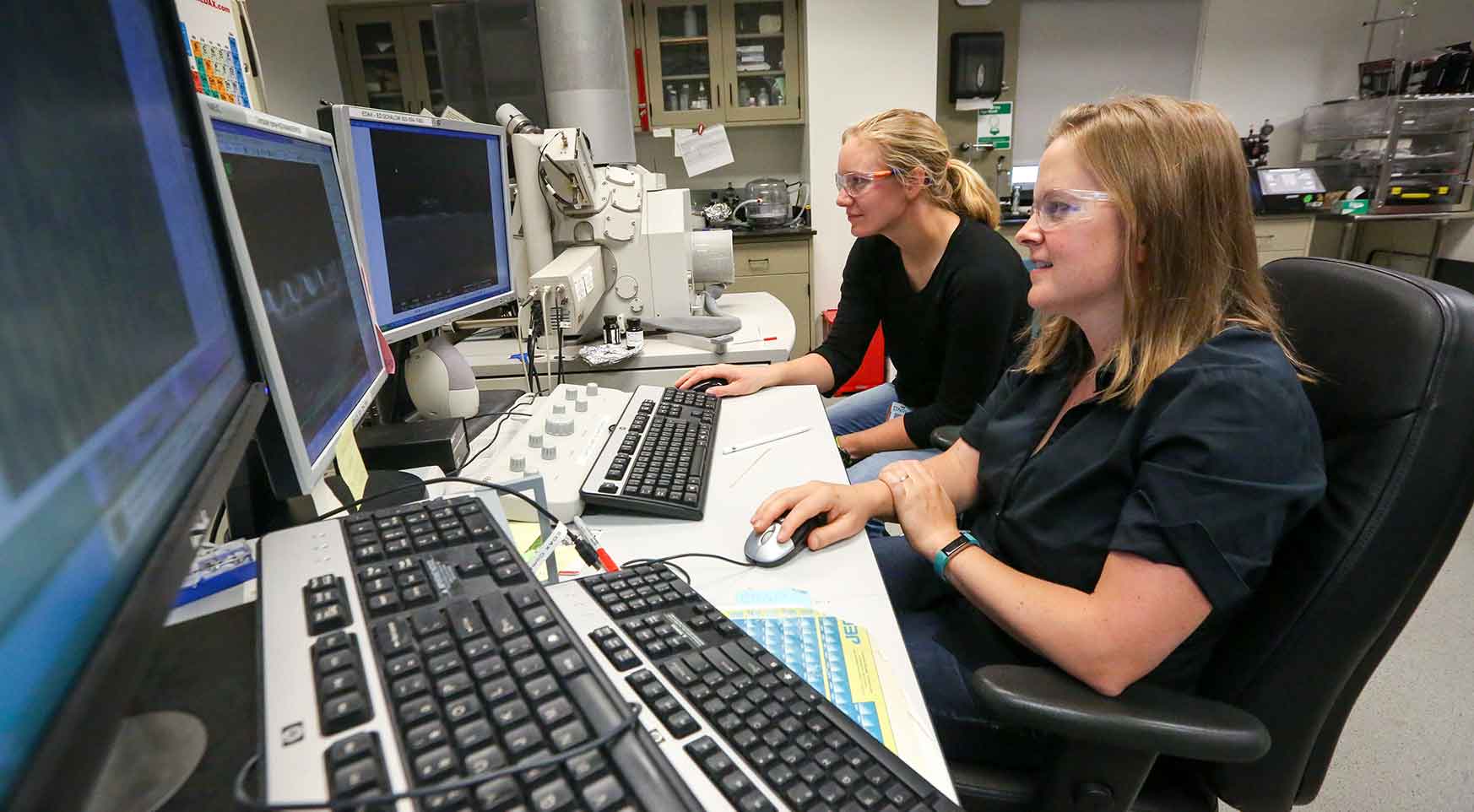 Getting up at 3 a.m. to accomplish a goal is nothing new for many interns at the U.S. Department of Energy's National Renewable Energy Laboratory (NREL). Certainly not for Theresa Saenz, who is used to hard work—she earned her bachelor's degree in materials science from Purdue University in her home state of Indiana.

This summer marked Saenz's second Science Undergraduate Laboratory Internships (SULI) program experience at NREL, and she wanted to make the most of her time in Colorado before heading to Germany on a Fulbright Scholarship. That's why the self-appointed "ringleader of SULI outdoor adventures" organized a predawn mission on a recent July morning for herself and around 40 other interns. Their objective was to summit Longs Peak, the highlight of a weekend trip to Rocky Mountain National Park.

Their experiment in sleep deprivation was successful—though there were some scary moments. "We narrowly missed a thunderstorm," said Saenz. "Fifteen of us summited between 8 a.m. and 10 a.m., and many more hiked up to Sky Pond" at 10,900 feet. To relax after their adventure, the interns enjoyed guitar sing-alongs around a campfire. However, the pace picked up again the following weekend, when Saenz led a whitewater rafting trip.

Such shared outdoor adventures are typical for NREL interns—and clearly one reason applicants vie to spend their summers in Colorado.

Emanuel Mendiola, a Research Participant Program Intern (RPP), will soon begin a master's degree program in electrical engineering at Stanford University, where he also received his undergraduate degree. Mendiola didn't have to seek out higher ground for his extracurriculars—on his first day at the National Wind Technology Center (NWTC) at NREL, he got to go to the top of a 600-kW Controls Advanced Research Turbine there. 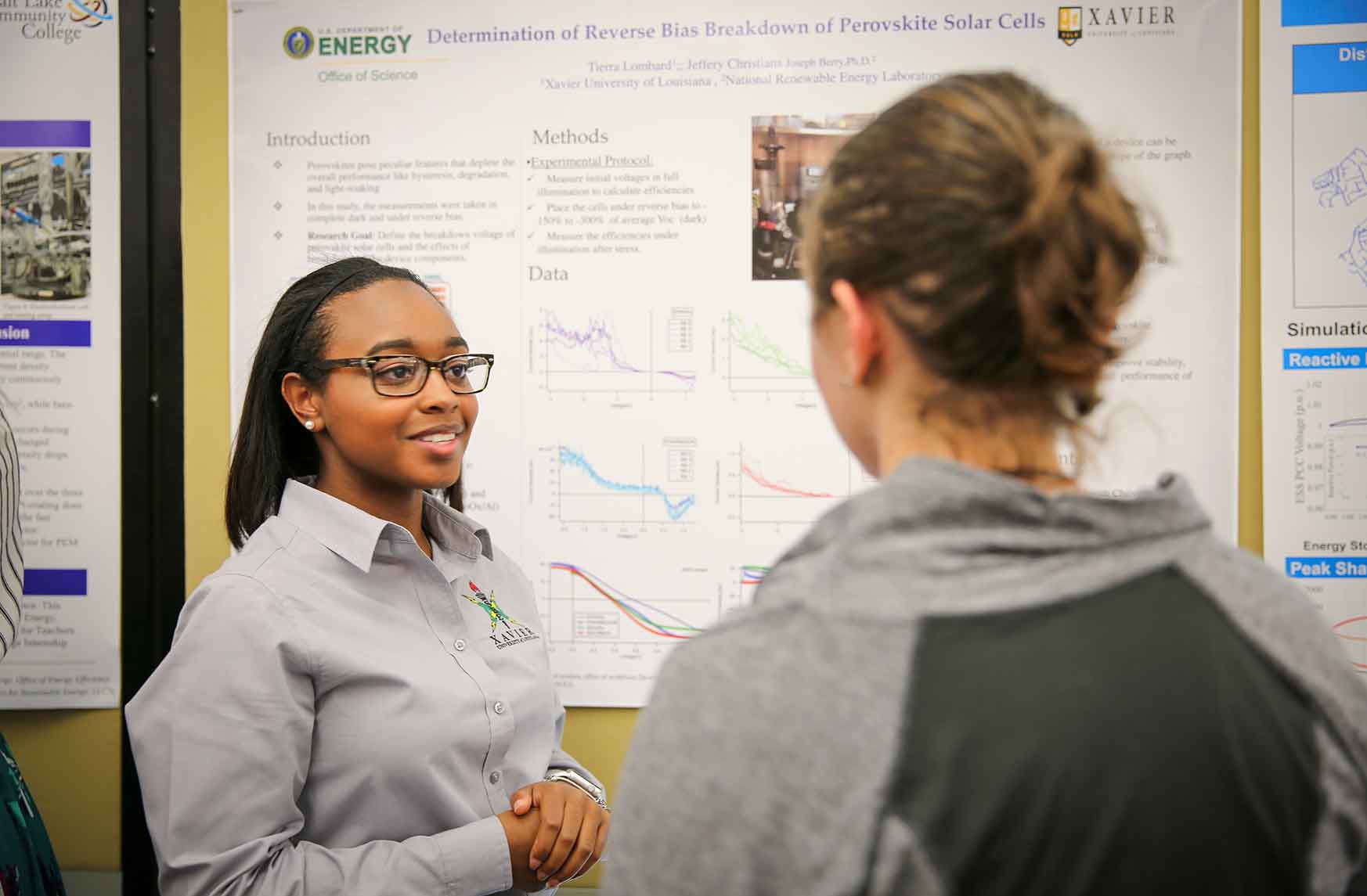 Win-Win for Students and NREL

And there's no doubt of the value for the laboratory as the students gain experience. "The undergraduate and graduate internship programs are a win-win for both the students and mentors," said Workforce Development and Education Programs Coordinator Linda Lung. "Interns are provided valuable research experiences and the mentors benefit from their enthusiasm, energy, and different ideas of how to approach research."

"NREL strives to create an environment that stimulates creativity and nurtures the next generation of exceptional researchers," added Danelle Wilder, who coordinates various NREL internships.

Senior Engineer Ben Polly, who is mentoring Stanford graduate student Susanna Struckmann in zero-energy building and district software, said, "She is doing a great job working with multiple teams at NREL to learn about the strengths and capabilities of different energy modeling tools." Struckmann, who grew up hiking and skiing in New Hampshire and was at Cornell University as an undergrad, didn't need to come to Colorado to get exposure to nature. Science was the lure. "In our classes, we use so much of the data that NREL has developed," she said. "It's the coolest place to work when you are interested in renewable energy."

Working with Polly, Struckmann has been examining how energy modeling can inform the development of high-performance districts, such as the National Western Center and Sun Valley development projects in Denver. "I'm using a lot of NREL's different software—URBANopt, Building Energy Optimization (BEopt), and Renewable Energy Optimization (REopt)—all the 'opts,'" she laughed. "I'm seeing how you can use these tools together to optimize energy efficiency and renewable energy systems for a zero-energy district." 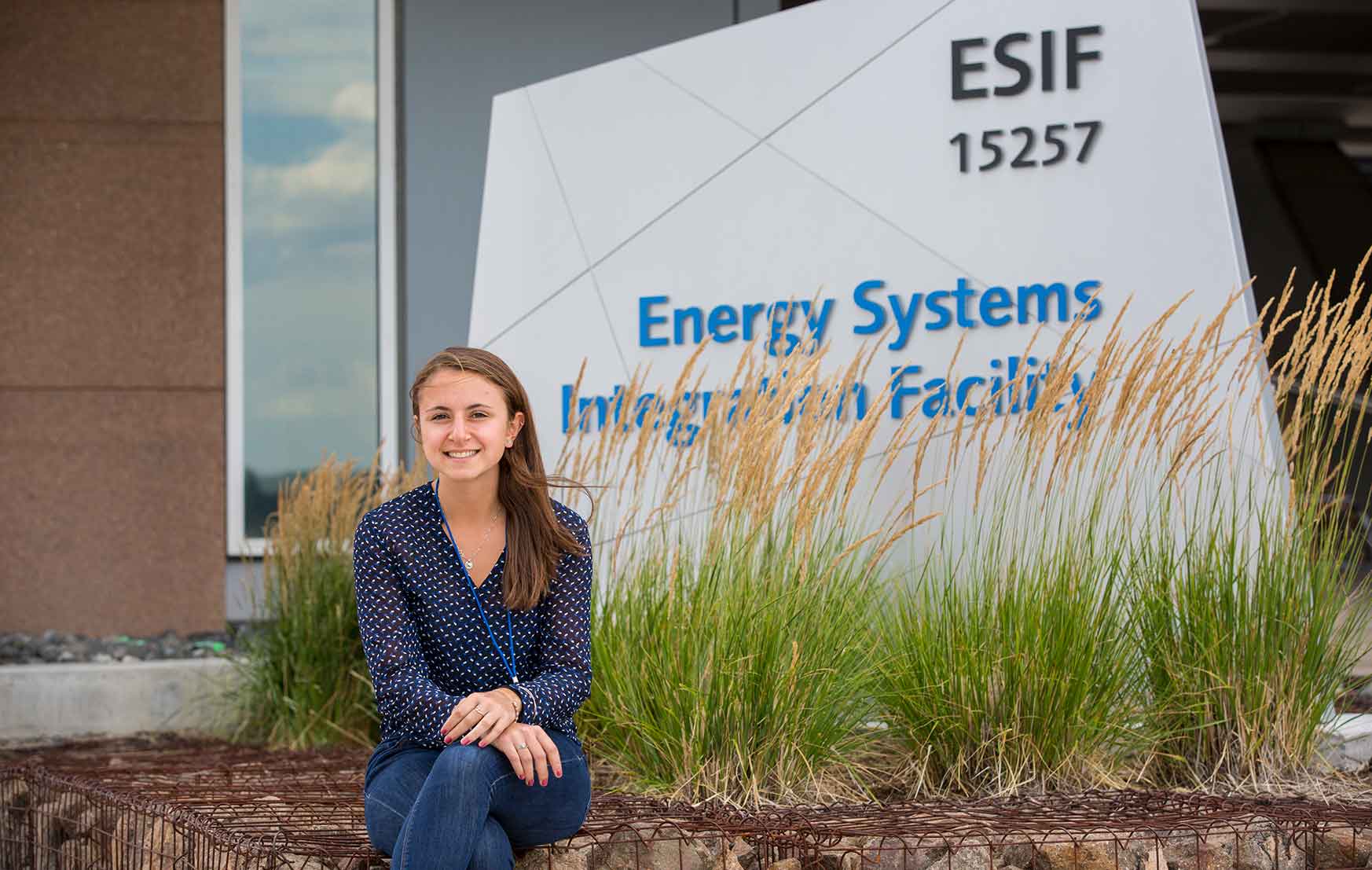 Susanna Struckmann didn’t need to come to Colorado to get exposure to nature, because science was the lure at NREL, including the chance to work in the laboratory’s Energy Systems Integration Facility. Photo by Werner Slocum, NREL

A big benefit of any internship is the opportunity to try out new areas of inquiry. That was top-of-mind for Arlinda Huskey, who agreed to mentor Mendiola at the NWTC. "I wanted to make sure he had one big project but also got exposed to other parts of the wind site," Huskey said. Mendiola first analyzed data from one of the large turbines, and then got a chance to work with an electrical engineer on a dynamometer. "We get him out to try different things to see what he likes—and maybe what he doesn't like," Huskey said. "That's kind of what you want to learn, right? What do I want to do when I grow up? Do I want to be behind a computer, analyzing data and looking at models, or do I want to be more hands-on, or maybe a mix?"

Mendiola agreed the diverse experience was a plus. "I'm liking the exposure to different aspects of the field," he said. It wasn't that he didn't always have an early love of science—he did, which is something many interns have in common. The native of Mexico, who became a U.S. citizen as a boy, said, "As a kid, I loved making and taking things apart. I was best at science and math in school, and they were my favorite subjects, too—but it wasn't until early on in high school that I decided I would study engineering in college. I've always been fascinated by electronics."

College courses in renewable energy have nudged Mendiola towards the field—which is why he made NREL his top choice to match under the GEM scholarship selection process. Mendiola hasn't made up his mind about what he'll do after his two-year master's program, but the lure of NREL is now strong. "I'm thinking about coming back to NREL," he said, adding that the scenery and the Thursday NWTC BBQs are part of the appeal.

For Tierra Lombard and Clark Elizabeth Washington—engineering students who are part of the VFP program from Xavier University of Louisiana—the 10 weeks from June to August have been eye-opening. "Neither of us knew too much about renewable energy. Since we've been here, we've learned so much," Lombard said. For one thing, they didn't know about perovskite solar cells, and credit mentor Joe Berry, a senior scientist who is lead on NREL's Perovskite and Hybrid Solar Cells team, for bringing them up to speed. "Joe's great," said Washington. "He's like a teacher to us."

Time in the laboratory and analyzing data have given them a new appreciation of sustainability—and sparked thoughts about the future. Lombard, a biomedical engineering major who is looking at medical school, and Washington, who is considering a Ph.D. in physics, can envision new possibilities. "We talk about graduate school, and coming to NREL. We tell Joe to put us on the list," Lombard said.

But there will be impacts from Xavier even before that. Ashwith Chilvery, a VFP assistant professor from the school, will bring his summer lessons learned back to campus. "This opportunity at NREL has empowered me with a strong set of skills that I can implement at my workplace," he said. 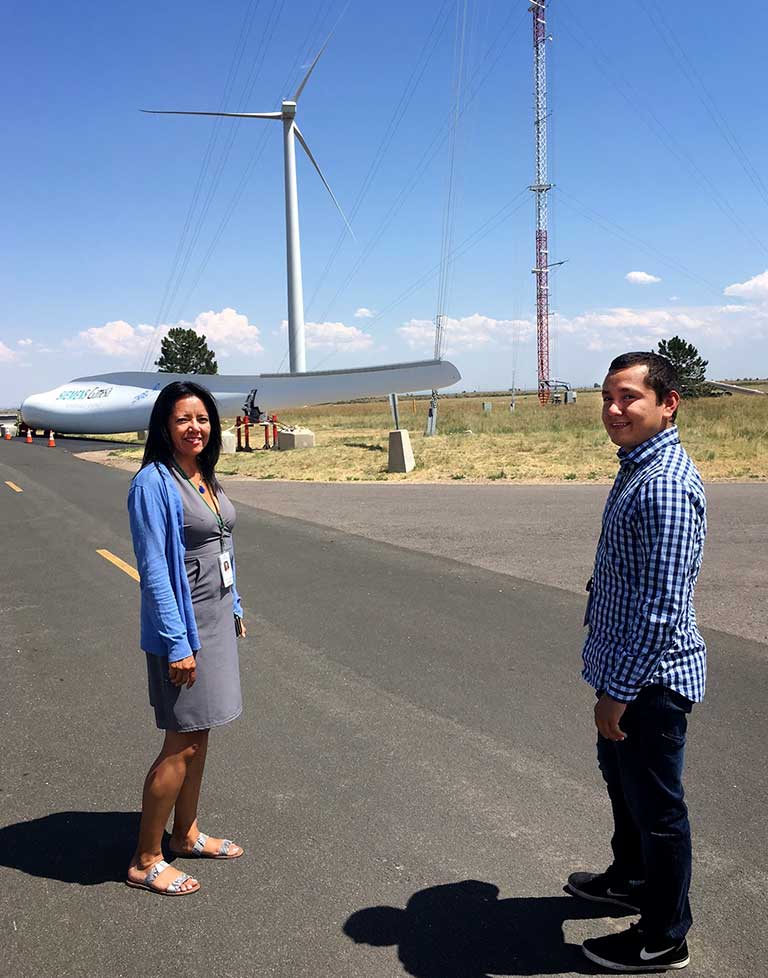 Bonds between mentors and interns can be strong. That explains why Saenz was such an obvious pick when she applied for the SULI program a second time. Her mentor, NREL Scientist Emily Warren, also guided her two years ago. "We've been in touch," Warren said, and the timing was right for an encore. There was a place for the ringleader in the area of III-V solar cell research. According to Warren, "Theresa is a great independent researcher, which is a good quality. She's working on a small, exploratory project that I'm principal investigator on. Theresa's been advancing that into different areas." For Warren, the SULI program offers flexibility. "It gives you, as a scientist, a way to bring in students" who can contribute to active research projects and get a taste for what a career in renewable energy research looks like. And while being a mentor comes with a time commitment, Warren said, "I like that aspect."

Saenz said her previous summer internships (including one at the Colorado School of Mines after her freshman year) have built upon one another in the study of solar cells. She hopes to pursue a Ph.D. with applications in renewable energy—so her return to NREL was no accident. "I get great research experience, great mentoring. There's no way you get as much exposure to scientists anywhere else as you do at NREL. This is what I'm interested in doing, and so it's exactly what I want to be working on."

And if she, like some of the other interns, ends up back at NREL someday, nobody should be surprised. There's plenty of technical climbing to do—both outdoors and in the laboratories.

Learn more about internships at NREL.