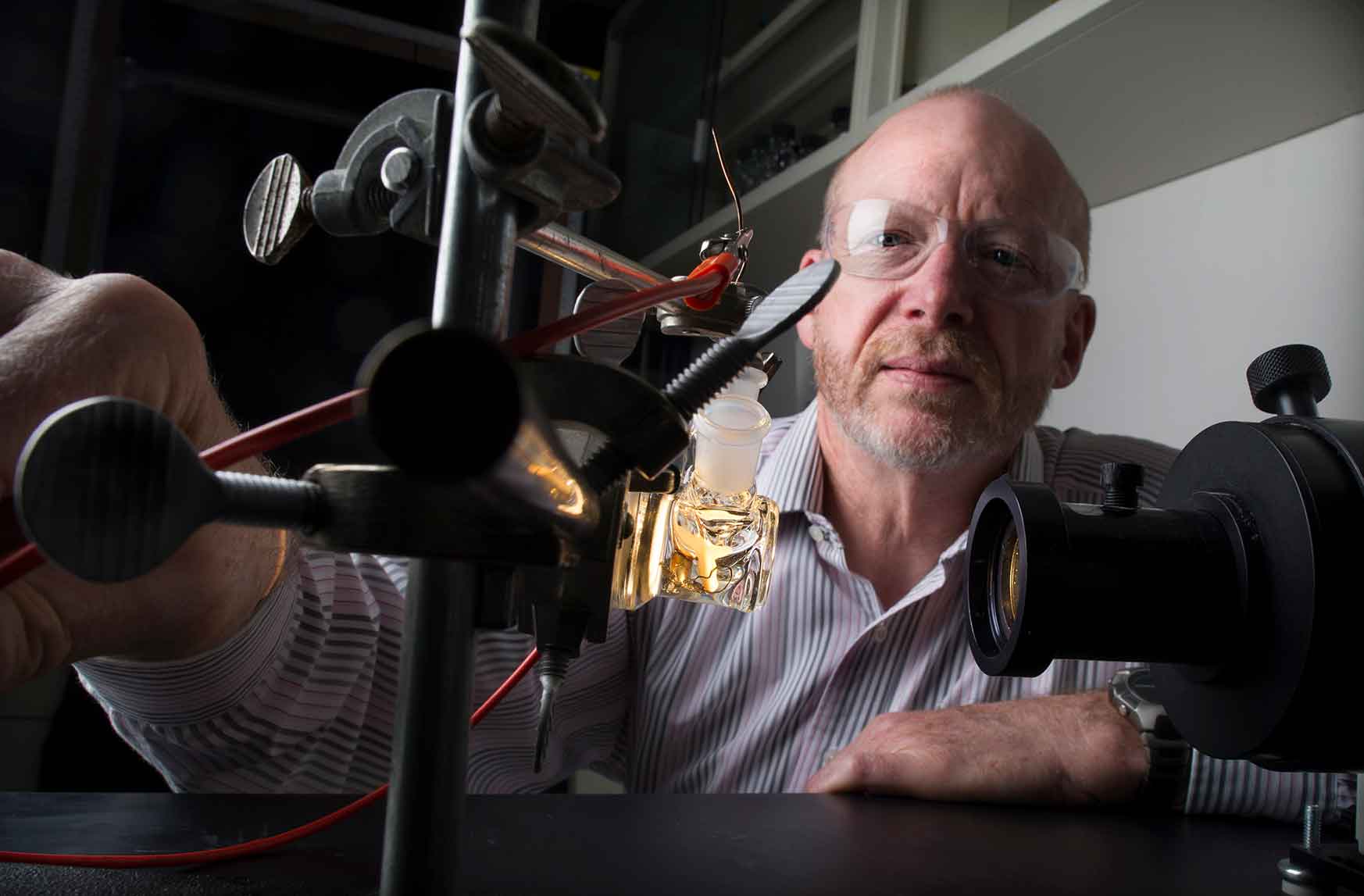 NREL Senior Scientist John Turner tests a photo electrochemical water-splitting system in the hydrogen laboratory at NREL. Turner set a world record for efficiency for the process in 1998 and was part of a team that recently achieved 16.2% solar-to-hydrogen conversion efficiency. Photo by Dennis Schroeder

Innovation is forever marching forward, but sometimes it's necessary to take a small step backward in the interest of greater accuracy. Revisiting previous solar-to-hydrogen research enabled scientists at the Energy Department's National Renewable Energy Laboratory (NREL) to improve the efficiency of a novel process that directly converts sunlight into hydrogen—and recapture a world record first set at NREL in 1998.

Earlier this year, the NREL team (James Young, Myles Steiner, Henning Döscher, Ryan France, John Turner, and Todd Deutsch) published the results of its record-setting research—which achieved 16.2% solar-to-hydrogen conversion efficiency—in the journal Nature Energy. It was a fitting way to mark NREL's 40th anniversary: Turner, a research fellow who set the initial record, has been at the laboratory since its early days as the Solar Energy Research Institute, where it all started with a desire to harness the sun.

Turner set the 1998 record using photoelectrochemical (PEC) water-splitting, a technology that was in its early stages at the time and is now poised to enable cheap and sustainable hydrogen production in the future.

A PEC system operates by directly injecting electrons, created when sunlight hits photovoltaic (PV) cells immersed in acidic electrolyte, to power a water electrolysis reaction. Turner's early success with PEC relied on tandem solar cell technology, developed at NREL in the early 1990s. The tandem cell uses two semiconductors to capture more of the light that hits it, generating the higher voltages required for the reaction. Turner modified the cell to operate in a water-splitting environment.

"Instead of making electricity and running it through a wire into an electrolyzer, you basically integrate the electrolyzer directly onto the surface of the semiconductor and you can split water that way," Turner said. "You can do that with high efficiency." The 12.4% solar-to-hydrogen efficiency record Turner set using this method was unmatched for decades.

"While the efficiency was important, the most significant thing to me was the use of the tandem device configuration to get to higher water-splitting efficiencies than had previously been obtained," Turner said. "I would characterize it as a quick-and-dirty measurement to show the viability of the concept. There were no standardized solar-to-hydrogen measurement procedures available at the time, and 18 years later, they still did not formally exist."

"Since NREL is one of the few laboratories capable of doing certified tests for PV devices, we wondered what it would take to develop a standardized protocol for certifiable solar-to-hydrogen efficiency measurements," Turner added. "As you might expect, the more we looked at the measurement procedures, the more possible sources of error we found. Measuring tandem PV solar cells is complicated and measuring tandems for water-splitting is even more complicated." For example, ambient conditions for a solar cell are much easier to establish than they are for a PEC cell in which a variety of electrolytes and cell geometries are used. 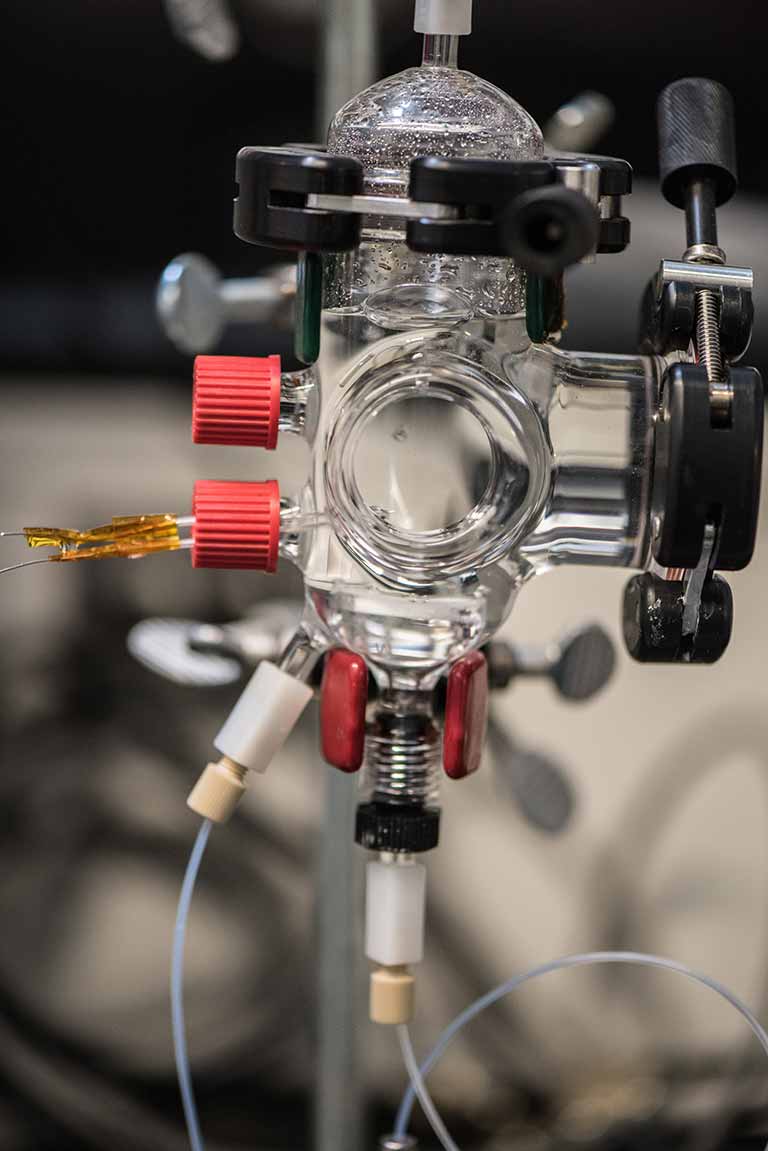 Committed to developing standardized measurements for PEC devices, Turner and his team reconsidered the 1998 findings.

"We discovered some of our previously used methods, and those used by others in the field, led to measurement errors," said Deutsch, an NREL senior scientist and Turner protégé. "We realized that several labs, including ours, had reported inflated values for efficiency. Before moving forward with more accurate measurements, we needed to address these errors and disseminate a standardized measurement approach to the community."

A closer look revealed the original experiment had been over-illuminated, partly because the team had not accounted for light transmitted by the nominally opaque epoxy holding the tandem cells in place. That made the actual illuminated area larger than what was used in calculations.

Last year, Young, Döscher, Turner, and Deutsch published an Energy & Environmental Science paper that revised the historic record efficiency from 12.4% down to 9.3%. In that paper, the researchers identified the need to develop standardized and validated testing of PEC devices and techniques to determine the efficiency of solar-to-hydrogen production. Further, they suggested that laboratories should be tasked with certifying those efficiencies in the same way NREL and others certify solar-cell efficiencies.

"There isn't a benchmarking facility that's recognized worldwide, but as the national lab devoted to renewable energy research for the Energy Department, and a leader in standardized PV measurements, it makes sense for NREL to lead this effort," Deutsch said.

NREL has continued improving tandem-cell water-splitting efficiency, and the new record reported in Nature Energy earlier this year was achieved with the help of another modification to the solar cell. NREL had already made improvements to the tandem cell Turner developed in the late 1990s, which consisted of a gallium indium phosphide (GaInP2) semiconductor stacked on top of gallium arsenide (GaAs). The new cell—known as an inverted metamorphic multi-junction device because it consists of multiple layers grown upside-down—allowed researchers to use indium gallium arsenide (InGaAs) instead of layers of GaAs, giving a considerable boost to the device's efficiency. The scientists also deposited a thin layer of aluminum indium phosphide (AlInP) on top of the device, followed by a second thin layer of GaInP2. The extra layers helped to partially protect the semiconductor from the corrosive solution that limits the cell's lifespan.

Using the inverted metamorphic multi-junction device, Deutsch's team was able to push past, not only Turner's revised 9.3% record, but also the world record at the time: an efficiency of 14%, reported in 2015 by an international team of researchers from Helmholtz-Zentrum Berlin, TU Ilmenau, Fraunhofer ISE, and the California Institute of Technology.

"People don't really shout about the record, but people noticed it," Deutsch said. "We got 14.3% last year and even though that's a record over theirs, we didn't want to make an announcement about it until we were over 15%." NREL's new PEC world record still stands at 16.2%, verified using the newly updated, more rigorous standardized measurements. 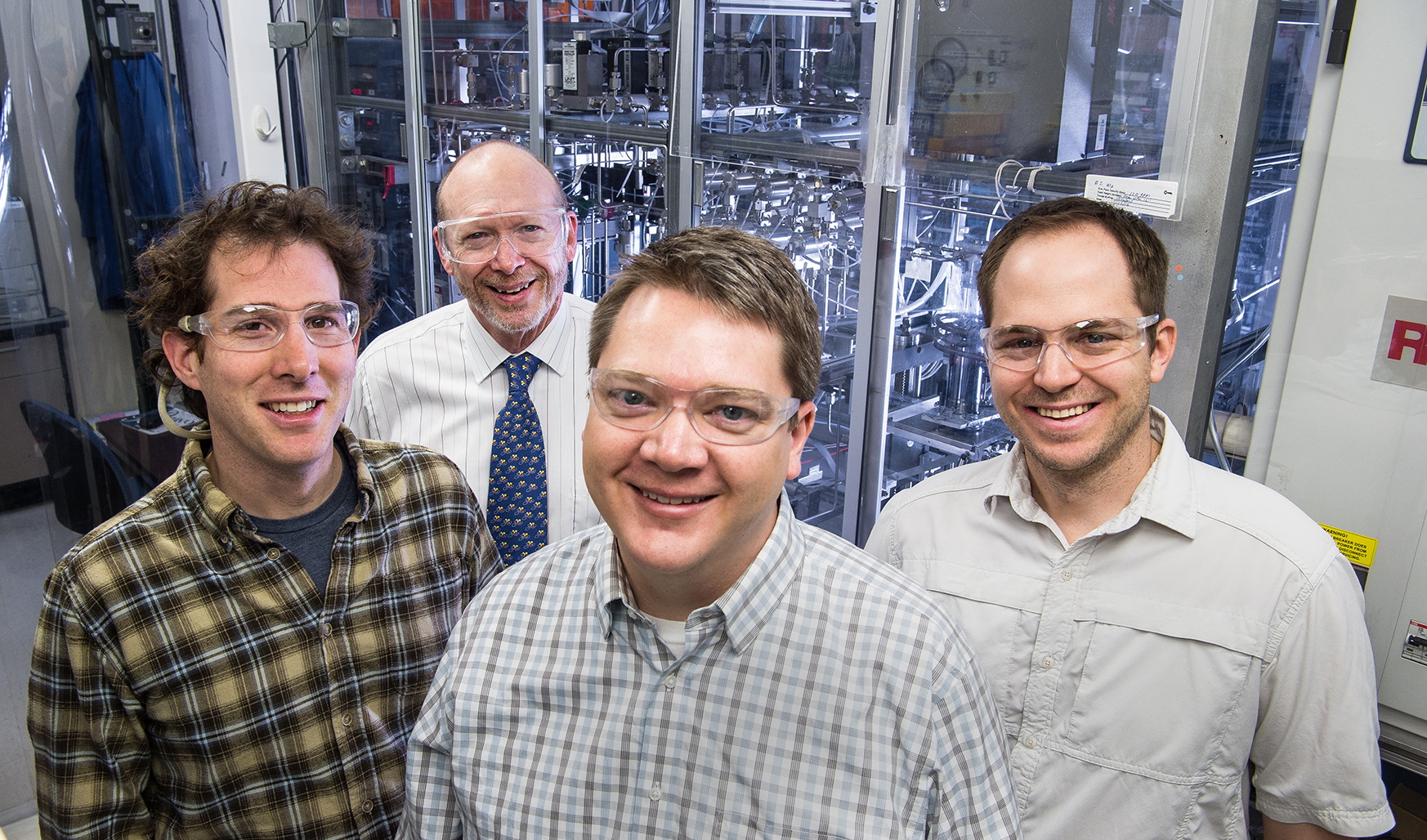 According to the Energy Department, the United States produces nearly 10 million metric tons of hydrogen each year. Hydrogen is used for various applications including ammonia production, which in turn is used for fertilizer, and can also be used to power fuel cell electric vehicles. A metric ton of hydrogen is enough to send each of 200 fuel cell vehicles on a 350-mile trip, but to make that much in a day would require a field of PEC devices. Exactly how many depends on the efficiency of the devices. If the efficiency is 15%, the devices must fill a space the size of five football fields. Raising the efficiency to 25% brings the size requirement down to three football fields.

Finding a cost-effective process to produce hydrogen is also of particular importance. The Energy Department would like to see the cost of hydrogen fall to less than $4 per gasoline gallon equivalent (1 kg of hydrogen is the energy equivalent of a gallon of gasoline) by 2020. This would make hydrogen-fueled vehicles competitive on a cost-per-mile basis with gasoline-fueled hybrid electric vehicles.

The Next Obstacle: Stability

An analysis of hydrogen production by PEC, published last year in Energy & Environmental Science by the Energy Department's Joint Center for Artificial Photosynthesis, revealed that the cost of hydrogen also largely hinges on the efficiency of the system used. While an integrated system can be more efficient, there are some serious trade-offs, largely in terms of the stability or lifetime of the semiconductor. Coming up with a way to make the semiconductors last longer in the harsh PEC environment is key to future research, Deutsch said. "Acid essentially eats away your semiconductor and they're really expensive, so you need it to last several years instead of several hours."

"If you can make this process work and meet certain metrics—efficiency, lifetime, and cost—PEC could compete with steam methane reforming for hydrogen production," Turner said. "The issue is that these metrics are very difficult to reach. We've met the efficiency one but we're far, far away from the lifetime and cost metrics that we need to achieve, so research continues in that area."