Claims for Solar Cell Efficiency Put to Test at NREL

Keith Emery, a principal engineer at NREL, has made the Colorado laboratory a major presence in the field of measuring the efficiency of solar cells. Photo by Dennis Schroeder

The sheet of paper taped to the door of Keith Emery's office tells the story. On the paper is a simple fever chart showing the improvements made in increasing the efficiency of two dozen types of solar cells. Some of the lines marking record efficiencies date to the mid-1970s. Others start much more recently, with the advent of newer technologies.

More than anyone at the Energy Department's National Renewable Energy Laboratory (NREL), Emery has seen the lines on that chart move ever higher. Since joining what at the time was the Solar Energy Research Institute, Emery has made the process of recording record efficiencies of solar cells and modules more accurate.

"The community requires—demands—independent measurements because it's very easy to unintentionally inflate the measurements," said Emery, a principal engineer at the lab. "Most of the measurement errors a researcher would make would tend to make the efficiency higher, not lower. So it's our job to put everybody on the same playing field. That's what we've been working on as a group."

NASA originally was in charge of determining record efficiencies for solar cells. After taking over that task in 1980, Emery visited NASA's Jet Propulsion Laboratory in California where he was given a solar simulator, and the John H. Glenn Research Center in Ohio where he was given all of their primary terrestrial reference solar cells. Emery, who holds a bachelor's degree in physics and a master's in electrical engineering, was just getting started.

The original system for testing solar modules was set up atop a mobile home, and at that time the computers were bulky and unrepairable. One of the biggest challenges in the first 10 years of the program, Emery said, was the incompatible computer platforms. One computer used a cassette tape to back up its files. Another was booted up by entering binary codes with paddle switches and saved data to reel-to-reel tapes.

Since Emery's early days verifying how much electricity a solar cell generates, he's been joined in his work by scientists in Germany (at the Fraunhofer Institute for Solar Energy Systems, or ISE), in Japan (at the National Institute of Advanced Industrial Science and Technology, or AIST), and in Italy (at the European Solar Test Installation).

Together, Emery and four counterparts around the globe determine which companies or laboratories are included in "Solar cell efficiency tables," which is published twice a year in the journal Progress in Photovoltaics. To secure a spot in the efficiency tables, claims must be independently recognized by a recognized test center.

The scientists involved with measuring the efficiencies of solar cells have visited each other's labs to familiarize themselves with the available equipment and general procedures. An inquisitive group, the researchers toss out question after question. How did you determine what the edge of the cell was for area measurements?  What kind of aperture did you use? What stabilization criteria did you use?

Having a select group of laboratories handle the validation of efficiency records gives the results credibility.

"The measurement labs have exactly zero enforcement," Emery said. "It's peer pressure that says, I'm not believing your result until you get an independent measured result. It is absolutely peer pressure that is making this whole thing work. This field is incredibly skeptical."

The efficiency of a solar cell or module is determined by the percentage of sunlight that's converted to electricity. To test how effective a photovoltaic (PV) device is, NREL uses solar simulators that can produce from 1-sun—which equals the amount of sunlight hitting the earth on a clear day, or 1,000 watts per square meter—to about 2,000 suns. 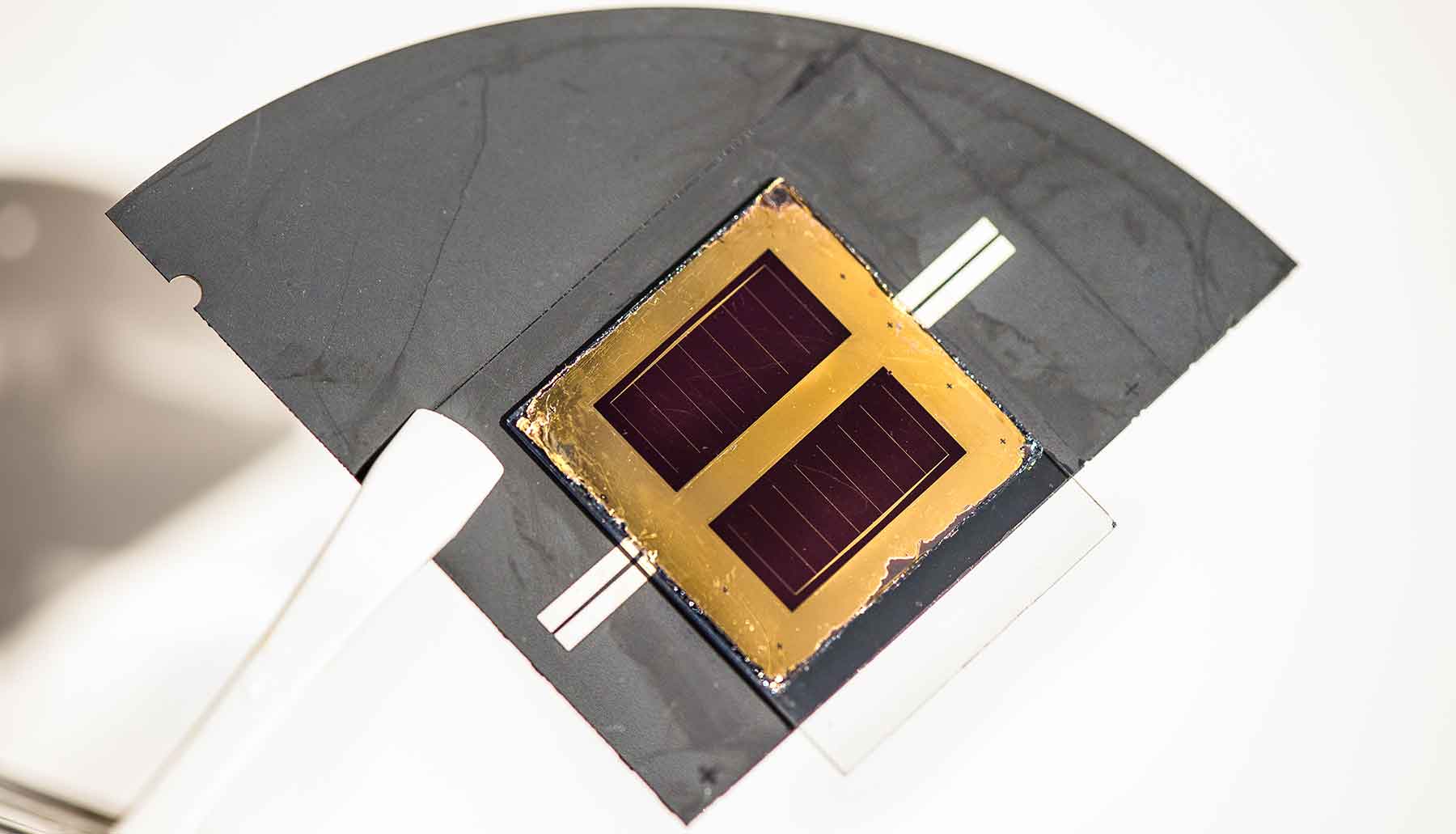 A dual-junction solar cell jointly developed by NREL and the Swiss Center for Electronics and Microtechnology, which set a record with a conversion efficiency of 29.8%. Photo by Dennis Schroeder

The latest version of the "Solar cell efficiency tables" lists records set by 23 different technologies. In the field of silicon, for example, there are four different record efficiencies, ranging from 10.5% for a thin film mini-module made by CSG Solar to 25.6% for a crystalline silicon cell made by Panasonic.

NREL validated six of the records, including one for a mechanically stacked solar cell made of gallium indium phosphide and crystalline silicon that was developed jointly by NREL and the Swiss Center for Electronics and Microtechnology. The efficiency of the dual-junction cell was measured at 29.8%.

"Records are very important, both for the institution that makes them and for the researchers," Emery said. "NREL likes to hold record efficiencies in this or that material system, but other institutions do too, so there's a competition. My group is firewalled from people that make the cells at NREL, meaning they have no influence over me or on these tables. That's why I'm in a separate group. We've tried hard to do that so that people who make the cells don't have any influence on whether the group that measures them considers them a record or not. That's important."

Emery, who established the PV cell performance characterization laboratory at NREL, has eight people working with him in the lab's Photovoltaic Cell and Module Performance Characterization group.

In the most recent "Solar cell efficiency tables," the majority of the validations—a dozen—were done by AIST, the Japanese testing center. Other testing laboratories validate the efficiency of solar cells, but their results aren't accepted for the inclusion in the tables. The lone commercial lab whose results Emery backs is the Newport Technology & Applications Center's Photovoltaic Lab in California. "I stand behind them because I helped set them up. I worked closely with them, and any results they have, they supply all data and answer all questions so I can review the data as if it was measured in my lab. In that case, the researcher sends me the record result from Newport, and I then contact Newport and ask them questions. I have a whole list of questions I usually ask."

If Newport's testing yields a record, Emery adds the information to the "Best Research-Cell Efficiencies," a chart he tapes to his office door that is also published online. It's updated more frequently and contains more categories than the efficiency tables published in Progress in Photovoltaics. He also alerts his co-authors who compile the efficiency tables for the journal. That publication carries considerable weight in the solar community. It's peer-reviewed, with five authors having to agree on which records should be included.

"Just because I think a record deserves to be in that table doesn't mean it winds up in there," Emery said. "It's got five authors, and all five authors have to agree on what is a new result, what should be included, what should not be included. We discuss these before each version comes out, back and forth via email. Everybody submits results. We discuss each other's results, and then we reach a consensus on what the new version will look like."

Emery's co-authors are from AIST, ISE, the Institute for Energy's Renewable Energy Unit in Italy, and the Australian Center for Advanced Photovoltaics. 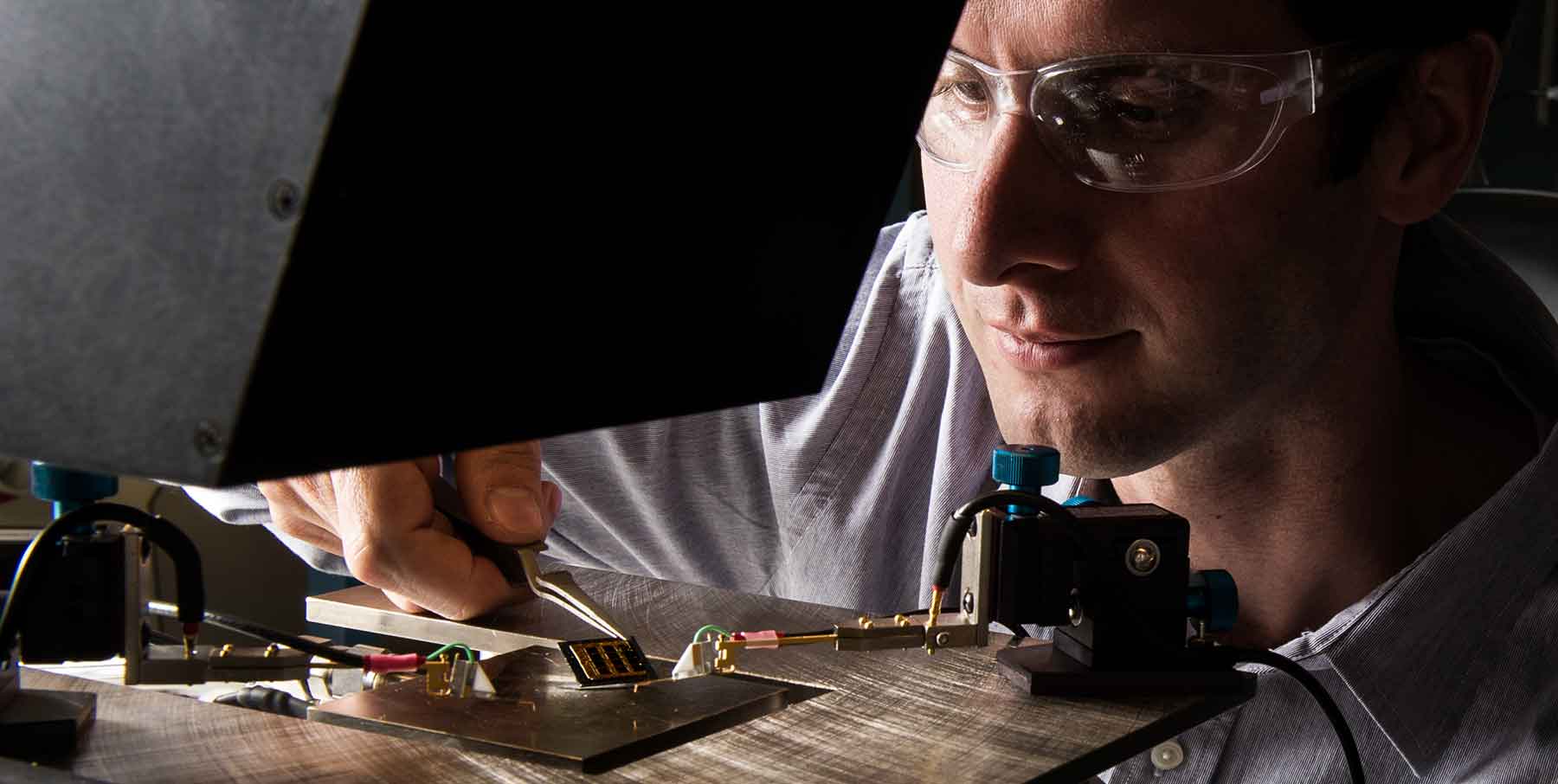 NREL researcher Ryan France positions a four-junction solar cell he developed on a simulator to measure how effective it is in converting sunlight into electricity. Photo by Dennis Schroeder

Although manufacturers are quick to issue press releases about new efficiency records, one of their big selling points is how many watts solar panels can generate for their customers. But solar panels made up of less efficient solar cells or modules are going to have to be larger—and thus more expensive—than others that are more efficient. "Below a certain level of efficiency, modules are not economical," Emery said.

The Energy Department's SunShot Initiative wants to see solar-generated electricity cost competitive with conventional electricity sources by 2020, which will require the levelized cost of energy (LCOE) for solar in the continental United States to hit 6 cents a kilowatt hour for utility-grade systems, 7 cents for commercial systems, and 9 cents for residential systems. To reach that goal, system prices will have to drop. Manufacturing costs will have to decline, while the efficiency rates will have to increase. If that happens, the amount of energy generated by the systems is expected to increase from less than a half-percent in 2014 to 14% by 2030, according to the SunShot Vision Study.

On the "Best Research-Cell Efficiencies" chart, the record for highest efficiency for a multijunction solar cell now belongs to two French companies, Soitec and CEA-Leti, which worked with the Fraunhofer Institute to reach 46% in December 2014. The record cell has four subcell converters, all in a stack only a few micrometers thick, that focus the sunlight through a lens and onto the cell. The record was confirmed by AIST.

NREL and the other the laboratories testing these high-efficiency solar cells are asking scientists to slow down. New records in what Emery calls "the over 40% club" have been set every few months. "We determined that as the efficiency went up, our errors went up. Everybody forgets about error bars. The difference between a 45% and a 48% cell is within our error bars. That was bad. But we also discovered that there were certain procedures that some of the labs were following that caused higher efficiencies than what they should be. They were in the higher end of their error bars, but everyone else was in the middle. So that didn't sit well. Now for the over 45% efficiencies, we want them to be measured at multiple labs."

Increasing Stability of Some Materials an Issue

Among the newest materials being used to make solar cells is the mineral perovskite. Since Ecole Polytechnique Fédérale de Lausanne (EPFL) in Switzerland secured a spot on Emery's chart in 2013, at 14.3%, the efficiency of perovskite solar cells has continued to increase. The current record, also held by EPFL, is 21.02%.

But neither perovskite solar cells, nor another emerging technology using organic electronics, are as stable as photovoltaics using more established materials. That's changing somewhat as scientists continue to make improvements toward improving the stability of the newer materials.

"The organic cells, when they first came into my laboratory in 2000, were shipped to us in containers with zero oxygen and zero water vapor, and were sealed in chambers that maintained zero oxygen, zero water," Emery said. "As soon as we opened the containers the cells started degrading, so we had to test on the order of minutes before they degraded. Now they're shipped in FedEx mailers with no special encapsulation. So they've solved some of their stability problems, most of them. Perovskites are the same thing. They degrade spontaneously in air. Every time you look at them, they're worse. But we just got some materials in that are stable on the shelves for several weeks, so they're getting better."

NREL measures about 4,000 samples of solar cells a year, but not all of those are trying for a record. Most are just sent to the lab because the scientists who made them want a measurement. Those that arrive with claims of record efficiencies occur about once a month, Emery said.

"It's been more than once where something sent to us as a normal sample we find out later has a record efficiency," he said. "We're not proactive in that regard. We are doing measurements for customers. If a customer wants to be considered for a record, they can ask. My goal is to support the customer, not necessarily to get their record efficiencies in some table."

Learn more about the National Center for Photovoltaics.