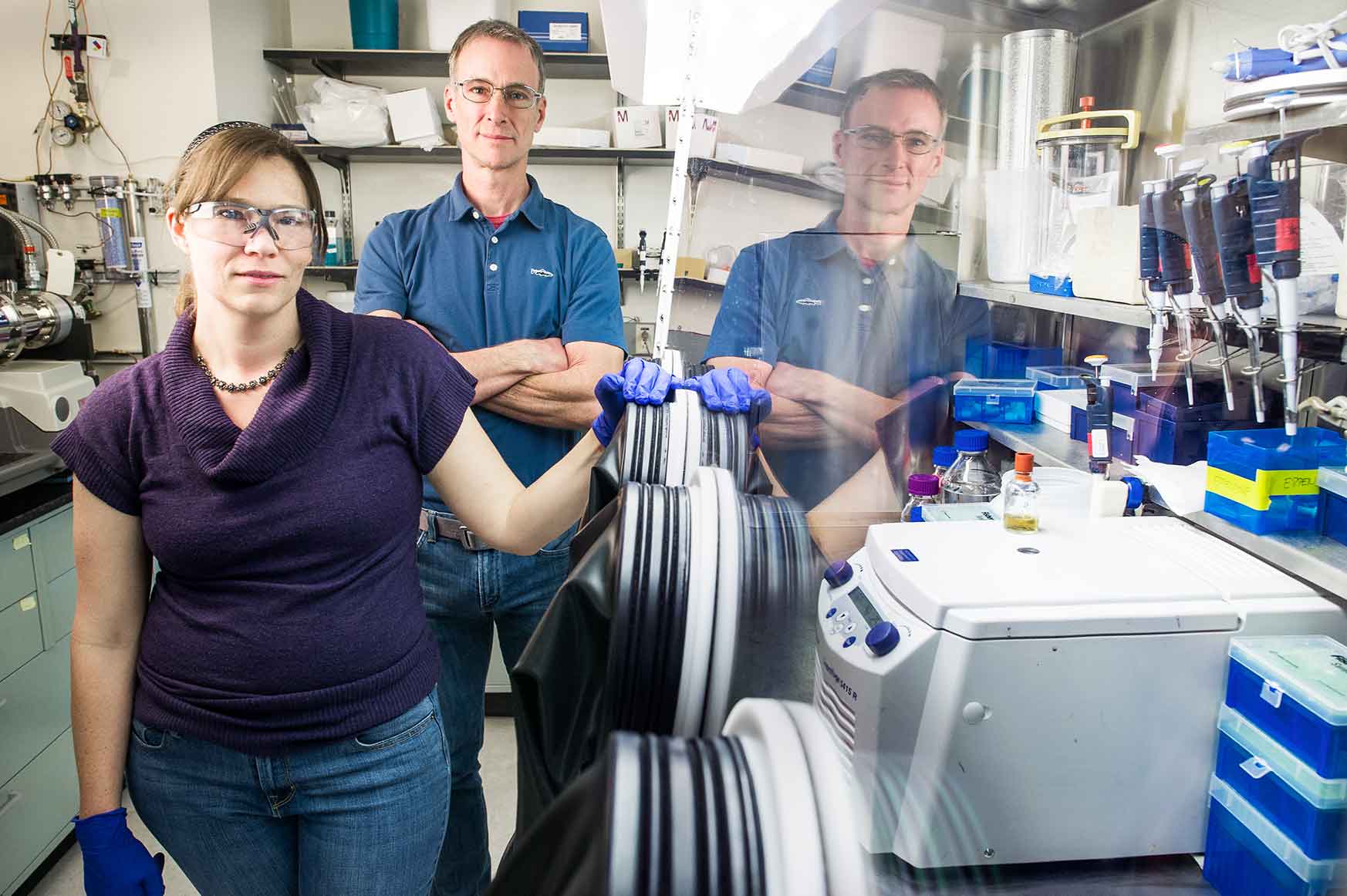 NREL researchers Katherine Brown and Paul King stand next to an anaerobic glove box used to keep sensitive samples in an air-free environment. They demonstrated that cadmium sulfide (CdS) nanocrystals can be used to harvest light, turning the energy from that light into electrons with sufficient potential to propel the reduction of N2 into ammonia, which takes place within the nitrogenase molybdenum iron (MoFe) protein. Photo by Dennis Schroeder

Paul King and Katherine Brown wanted answers. To produce ammonia from nitrogen, could they use a biomolecular reaction similar to one that boosts the production of hydrogen from water?

"That was the genesis of the idea," said King, who works in the Biosciences Center at the Energy Department's National Renewable Energy Laboratory (NREL).

The answer, they discovered, didn't come as easily as the work with hydrogen, but it proved possible with algae—and their new method could become a viable alternative to the century-old, energy-intensive Haber-Bosch process.

Secret Rests with What Algae Can Do

Green algae absorb sunlight and use that energy to generate carbon and hydrogen. NREL scientists had already found that, by replacing the algae's normal hydrogen-producing enzyme—called hydrogenase—with a ferredoxin and hydrogenase fusion protein, they could trigger the algae to increase hydrogen production.

But what works for one biochemical reaction may not work for another. Compared to the tight bond between nitrogen molecules, hydrogen molecules are relatively easy to separate. Researchers needed greater understanding of nitrogenases—enzymes that direct the conversion of nitrogen to ammonia—before they could begin to work on a renewable method for ammonia production.

Manufacturers produce about 150 million metric tons of ammonia from nitrogen globally each year, with the vast majority used to make fertilizer. Nitrogen itself is plentiful, making up more than three quarters of the planet's atmosphere—but converting that nitrogen to ammonia requires a vast output of energy. As much as 1% of the world's electricity and about 4% of its natural gas powers the Haber-Bosch process annually. Named for the German chemist who developed the method (and for another who helped scale it up for industrial use), the process has remained the standard for producing ammonia since the days of World War I.

Because so much natural gas is required, domestic ammonia production is dominated by three states where the resource is plentiful. Converting nitrogen to ammonia using the process developed at NREL would help to decentralize the industry while reducing both costs and use of fossil fuels.

But nitrogenases still require a large amount of chemical energy that comes from adenosine triphosphate (ATP) molecules. NREL solved this problem by replacing ATP with sunlight, captured by nanocrystals of cadmium sulfide (CdS). The solar rays power a catalytic reaction within the enzyme, allowing it to break apart the nitrogen bonds and create ammonia. 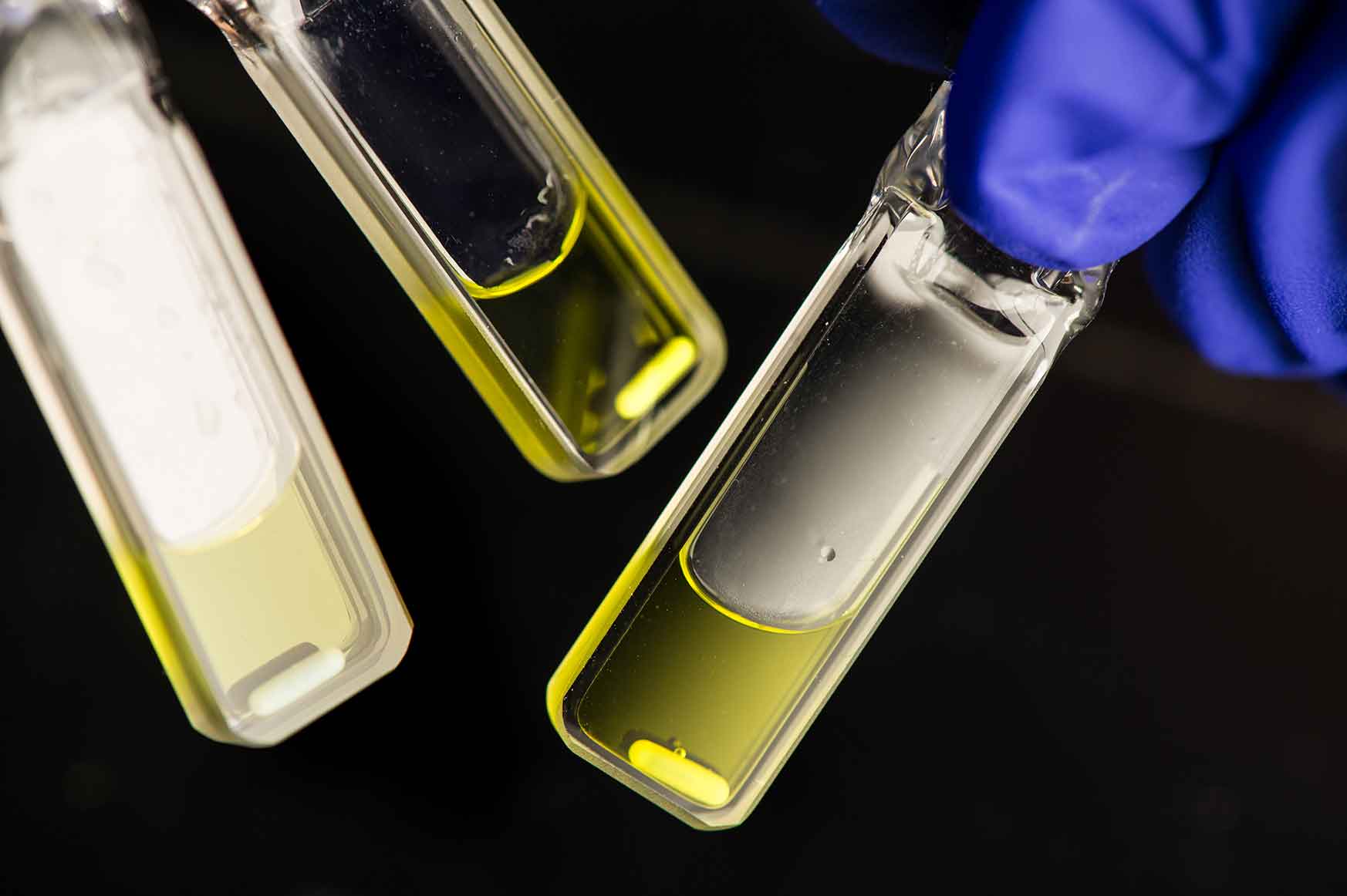 Last year, the journal Science published a paper outlining the research conducted at NREL by King and Brown, along with colleagues at Montana State University, University of Colorado, and Utah State University. The team determined the nanocrystals produced 63% as much ammonia as the system powered by ATP.

King, who holds a Ph.D. in biochemistry and molecular biology, and Brown, who earned a doctorate in bioengineering and biomedical engineering, had already collaborated on the study that used CdS nanocrystals to produce hydrogen. That research demonstrated the need for a sacrificial electron donor to regenerate the nanoparticle after giving an electron to the enzyme, which allows the nanoparticle to repeatedly serve as a catalyst for the chemical reaction. The new ammonia study builds upon this earlier research.

According to Brown, nitrogenase has a number of functions. "In addition to reducing nitrogen, it can also make hydrogen," she said. "It can also take acetylene and make ethylene, and we looked at that. We worked our way up to nitrogen reduction, optimizing at each step, and took this systematic approach instead of trying to hit the bullseye for nitrogen right away. We built up slowly to a system that looked like it would work for nitrogen."

University collaborations drove the science forward. Brown spent a week at the Utah campus where she studied enzymes and made repeated trips to the Boulder campus of the University of Colorado where associate professor Gordana Dukovic shared her expertise in CdS nanocrystals.

"My favorite aspect of this project is that it's so interdisciplinary," Brown said. "It's inspiring to be working with people from multiple disciplines with multiple points of view and approaches to problems. I think that is fundamental to our success and will continue to drive future success. That's where science needs to be going because none of us can be experts in all of it." 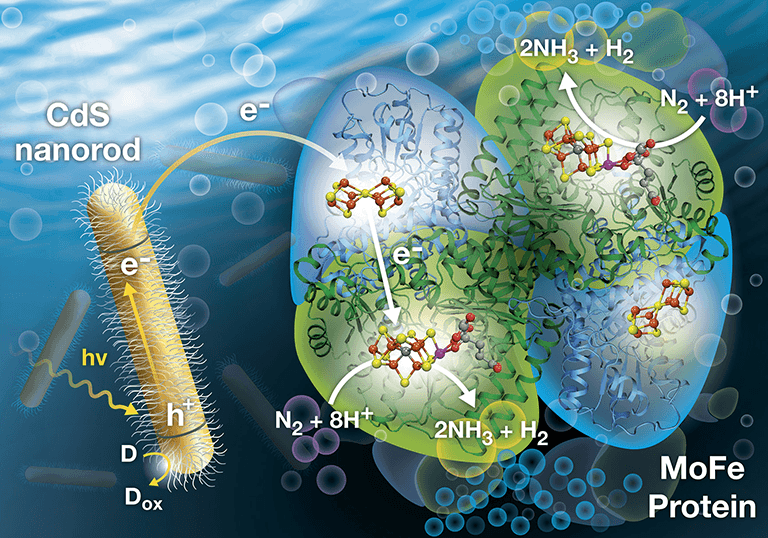 Where NREL Research Could Lead

The research marks the first step in a longer process. Brown said building a device that uses light-driven enzymes to make ammonia would not be the best idea. The enzymes, she said, "are labor-intensive to make and to isolate. Ideally, you would want some kind of artificial catalyst that is based on what we understand about the enzyme. That's the value of this work."

Building a Haber-Bosch plant can be expensive, and having to produce ammonia in one facility and ship it to where it's needed adds to the cost. King envisions the NREL process being useful in places such as Africa, where the continent has a growing agricultural economy but lacks the water and natural gas resources that North America has. With those limitations in mind, ammonia could be produced where it's needed using the method King and Brown pioneered.

"You might conceptualize the process, not as a replacement for Haber-Bosch, but as fitting a niche need in terms of agricultural systems," King said.