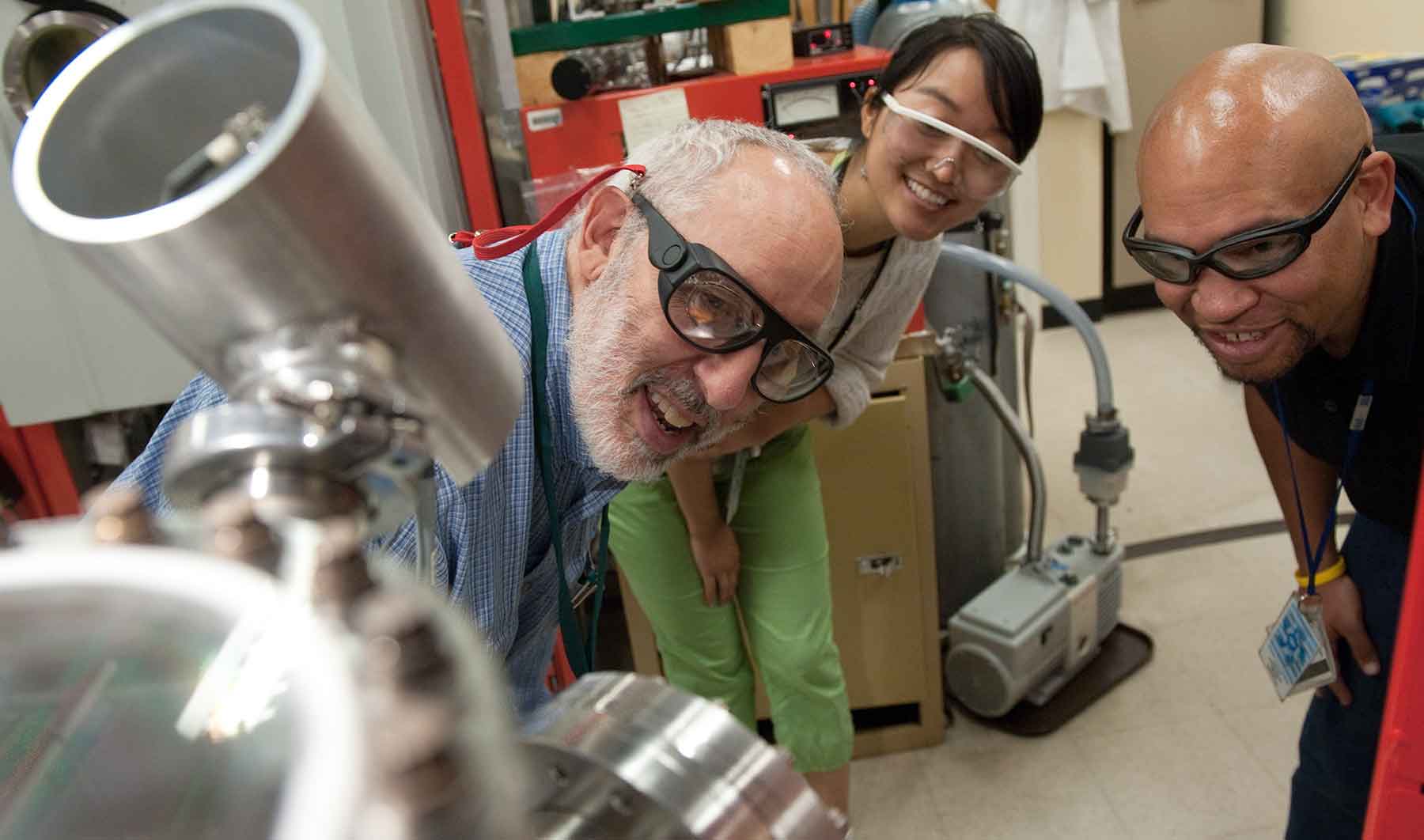 In this 2010 photo, Dave Ginley, along with NREL's Ke Yi and Joe Berry, view a pulsed laser that deposits material on a solar cell. Photo by Dennis Schroeder

The source of Dave Ginley's passion for science is no mystery. As a 4-year-old, he was given a chemistry set. "Back in those days, chemistry sets were far more interesting than they are nowadays. I got hooked on blowing things up, or at least pyrotechnics, at an early age," he chuckled.

Ginley wasn't trying to set the family home in southeast Denver ablaze with his experiments (twice). He was merely testing a model rocket engine he had built when "things kinda went awry. I had to clean up the basement for the next month" from the fire extinguisher powder he sprayed. Such mishaps didn't deter the future Energy Department's National Renewable Energy Laboratory (NREL) research fellow and chief scientist. "I knew I was going to be a chemist."

In high school, Ginley grew curious about energy and alternative approaches, and as a senior, he took first place in the Colorado/Wyoming Science Fair for his project to freeze-dry wood instead of kiln-drying it to make it stronger (an approach verified at Colorado State University). The prize was his first jet trip a year later to the American Association for the Advancement of Science (AAAS) convention in Dallas, Texas—unaware that years later, in 2014, he would be named an AAAS Fellow. It was an experience similar to one he had as an undergrad at the Colorado School of Mines, attending a science week at the California Institute of Technology: "You realize you are a part of something bigger and very exciting."

He continued to follow the chemistry path, which eventually led him to the Massachusetts Institute of Technology (MIT), where he earned his Ph.D. in inorganic chemistry, contributing to key papers in the then-nascent field of photoelectrochemical water splitting.

Knocking on Wood as a Family Business

In part, the reason Ginley tested wood back in high school was that he was very familiar with lumber. His father owned a construction company, and Ginley spent most summers working on commercial projects. "It taught me to strive," he said, smiling. "Dad built everything in the house, so I just grew up with tools." At one point, he was a journeyman carpenter—and, to this day, he enjoys woodworking.

Ginley's mom taught reading in public schools, and along with his dad, instilled something else in the family's four children: a love of skiing and the outdoors. His folks were on the National Ski Patrol (NSP). Years later, when Ginley was on the NSP Board of Directors, he wrote that he learned to downhill ski in what he believes are the two coldest areas in North America. "I don't think I was warm until I was 11," he joked.

Despite the chill, the tradition became ingrained. Ginley and his two younger brothers, Doug and Ron, are still on the ski patrol some 40 years later. Along the way, many other members of the clan crossing three generations have joined the 27,000 NSP members nationwide. "You get a lot of skiing," he explains, "but more than anything else, you get to help people when they really need it most: Somebody has a broken leg or altitude sickness, or sometimes worse." These skills come in handy in outdoor activities from hiking to biking: Ginley also volunteers for the Children's Hospital Courage Classic cycling event as a riding medic. 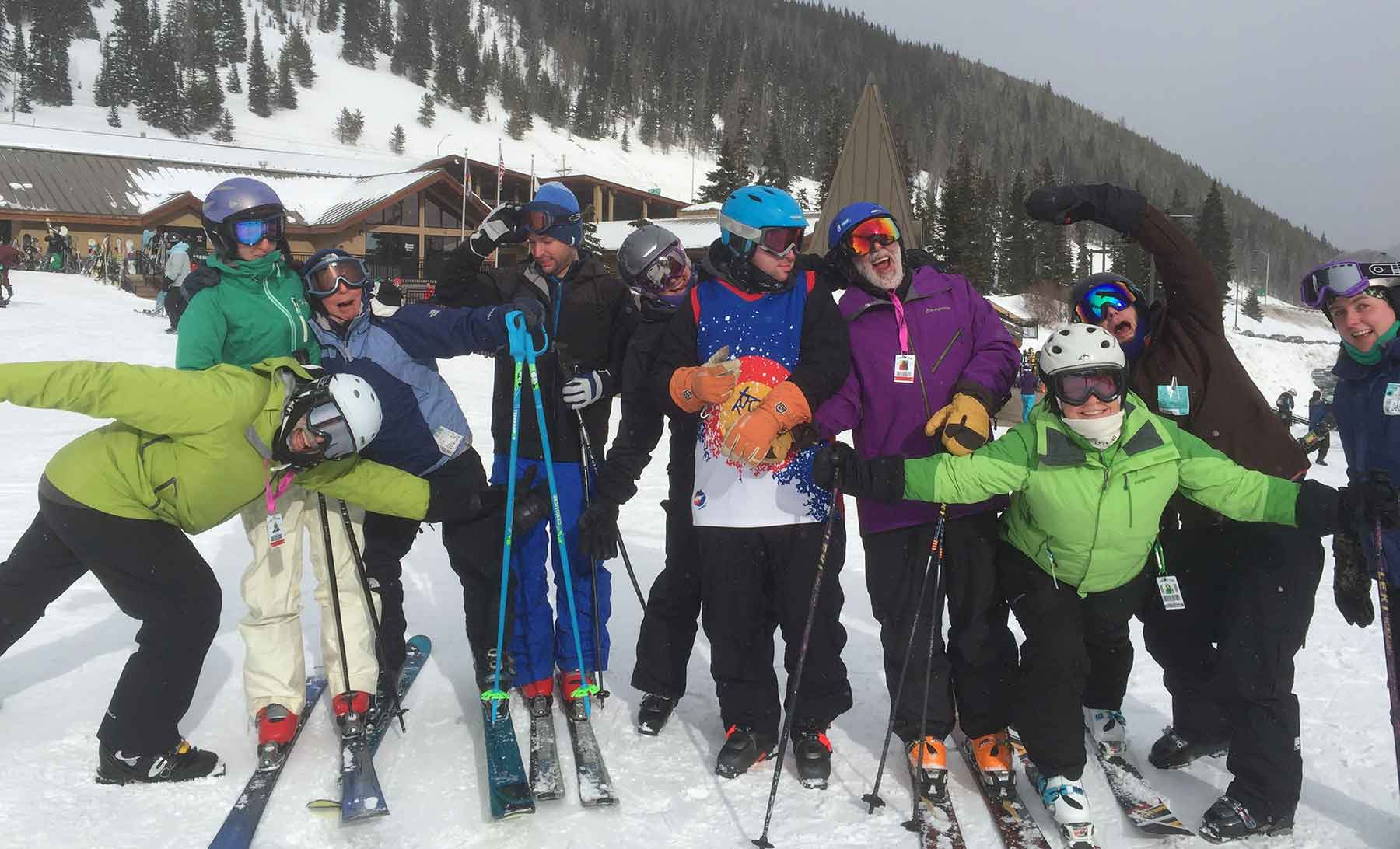 Dave Ginley and his family enjoy a ski outing together in Colorado. Photo by Dave Ginley

As much enjoyment as it seems he has outside of NREL, Ginley has an equal measure at the laboratory—his lighthearted approach signaled by the collection of Dilbert cartoon strips taped to his office door.

"It's always been fun. I am extraordinarily fortunate and have done what I dreamed I would do." His early career led him to Sandia National Laboratories when solar research was becoming a priority. It was an era when the laboratory was run by Bell Labs with a can-do philosophy.

Ginley's work in the development of photoelectrochemical cells, polycrystalline solar cells, conductive polymers, semiconductor growth and processing, and advanced sensors is at the forefront of energy research. In a 2012 Sandia Lab News article about the laboratory's historic impact, the author mentioned him for his breakthroughs in silicon grain boundary properties in the late 1970s and early 1980s. All the while, the Solar Energy Research Institute—the laboratory that would later become NREL—was also on the horizon.

Homecoming to Denver and NREL—and a Passage to India

"[The lab] kept making offers. My whole career was a long date with NREL," Ginley said. Finally, in 1992, he decided to return to his roots in Colorado. And at NREL, Ginley has surely made his mark. He's been part of the research team investigating what makes perovskite device structures valuable. The team is looking at how the material, when processed in a liquid solution, has unusual abilities to diffuse photons a long distance, potentially creating a more effective solar cell. Senior Scientist and Group Manager Phil Parilla, who has known Ginley since he first came to NREL, said, "Dave is a mover and shaker, moving things forward and shaking things up."

Energy Secretary Ernest Moniz, center, meets in 2016 with leaders of three consortia begun during the Obama presidency—including Dave Ginley, third from the right, who codirects the Solar Energy Research Institute for India and the United States (SERIIUS). Photo by U.S. Department of Energy

Among many honors Ginley has received are four R&D 100 Awards, beginning in 1993 with one for New Etch Technology, an innovative etching process used to develop microelectronic circuits, high-temperature superconductors, and opto-electronic devices. In 2004, he received NREL's Hubbard Award, given annually to a researcher for high-level research contributions.

Ginley's office is filled to bursting, not only with journals, but with family pictures and decorations like a rubber Yoda doll head, a pink solar-powered baseball cap with a "no smog" emblem, cartons of ramen noodles, and an illustration of a fantasy wizard. There's a plaque for a patent he received in 2012 for "conformal coating of high structured surface," one of more than 30 patents he holds. The stuffed bookshelves include a few tomes he has either authored or co-edited.

There are also photos of India—a place he's familiar with. Ginley codirects an effort by scientists from the United States and India—the Solar Energy Research Institute for India and the United States (SERIIUS)—to bring low-cost renewable electricity to thousands of villages in India without any electricity as well as to provide reliable electricity to cities. SERIIUS, one of three such consortia launched during the Obama presidency, makes Ginley proud. "It's a time in your career when you can potentially make a big difference," he said. "This truly can be transformative."

The Elemental Formula for a Life

Ultimately, it's difficult to envision Ginley slowing down. Facing challenges, he has been known to say, "Don't cry. Drink a Red Bull!"

"Dave is a fireball of energy," said Marisa Howe, science programs project leader in the Chemistry and Nanoscience Center. "He can finish an intense 32-partner report or an Energy Frontier Research Center proposal, and within hours of submitting it, be on a plane to the other side of the world without batting an eye."

There's still plenty to explore, and he's happy to do it. Ginley's active in the area of the general class of defective transition metal oxides including high-temperature superconductors and rechargeable lithium battery materials. His most current passion is combining computational materials design with high-throughput experiment and characterization as part of the NREL-led Center for Next Generation of Materials by Design, an Energy Frontier Research Center.

"Dave is an awesome person who is eager and curious," said Lauren Garten, a postdoctoral researcher who works with him in his role as chief experimentalist in the Center for Next Generation of Materials by Design. In the center, Ginley works on the development of novel functional metastable materials.

Overall, he continues on a life path begun as a curious 4-year-old—which puts him on par with his young grandson. "You don't go into science for money—that was never the goal," he said. It's no surprise that he volunteered to help with the recent Colorado Science Bowl on February 20, moderating science questions for incredibly bright high school students at Dakota Ridge High School. He knows what early engagement with science can lead to.

Ginley's time in science, and at NREL, remain as fascinating as messing with rocket engines as a boy. That big world he's part of has also shrunk, because he knows most of the people in his field worldwide. "I could not have asked for more," he said, simply—except for maybe another case of Red Bull.