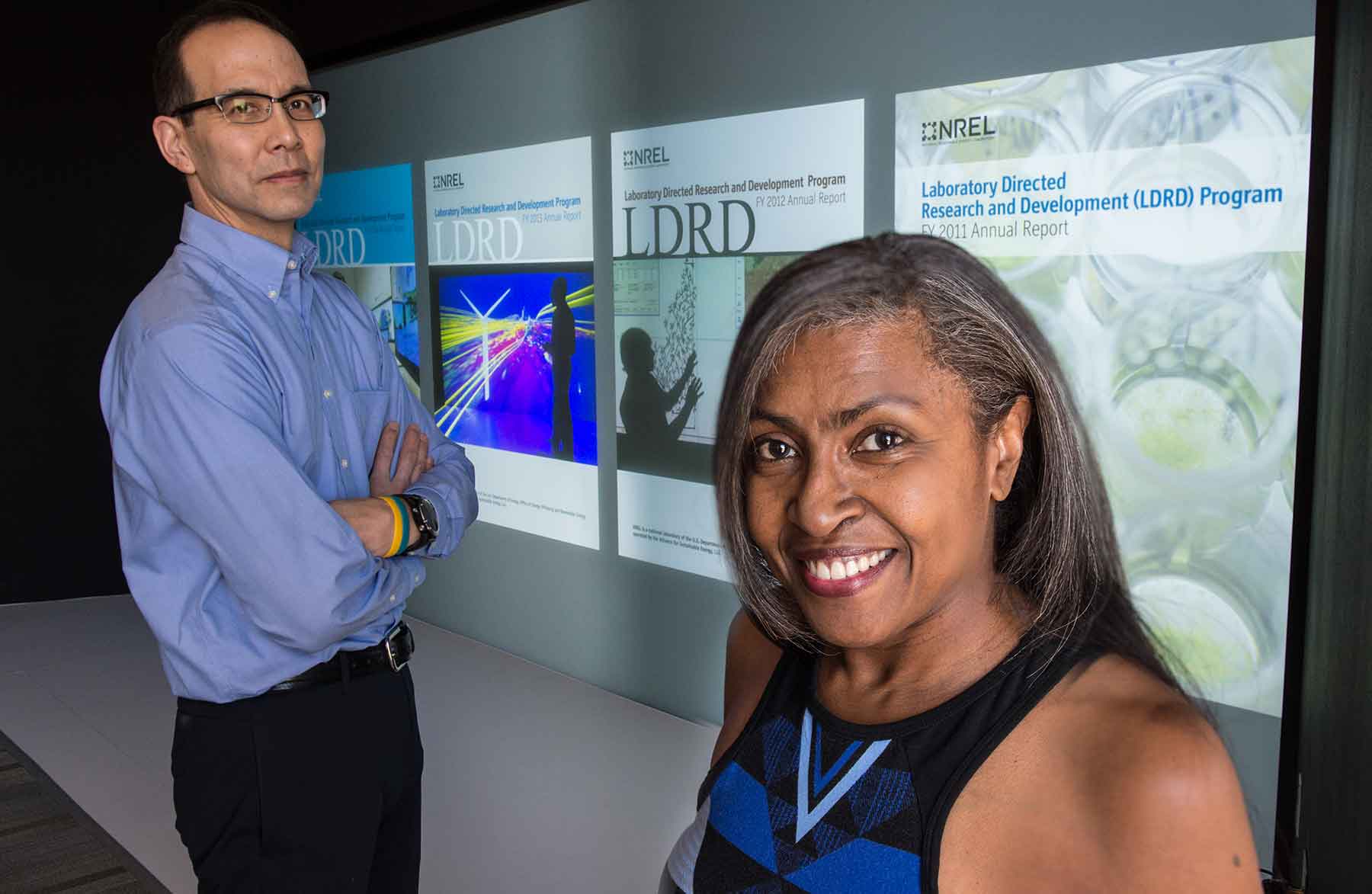 Eric Manuel, director of NREL's Planning and Performance Management Office, and Sheila Terry, LDRD program administrator, stand in front of a display of reports about NREL's LDRD-funded projects over the years. Photo by Dennis Schroeder

The Energy Department's National Renewable Energy Laboratory (NREL) is preparing to foster the latest wave of creativity as a panel decides which ideas will be accepted into the Laboratory Directed Research and Development program.

The program, known simply as LDRD, promotes innovations in science and technology. NREL and other Energy Department laboratories each have their own LDRD funds, but share common objectives including serving as a proving ground for new concepts.

For NREL's scientists chosen to receive LDRD money, it's a badge of honor.

"One of the first projects I worked on was someone else's LDRD," said Annabelle Pratt, a principal engineer who joined NREL in February 2014. "It took me a little while to understand why people were so excited to get it because it's like a vote of confidence in what you're proposing."

NREL is in the process of determining which proposals will be selected for LDRD funds to start in fiscal 2017. The path to LDRD funds looks like this: Scientists submit a three-page pre-proposal describing their idea. The researchers whose pre-proposals are chosen are asked to submit full proposals, and later will go before a panel to discuss their ideas further. Panelists then rank the proposals.

The proposals must fit into one of these categories:

There's also a new program called the Director's Postdoctoral Fellowships that receives funding through the LDRD.

"It's an opportunity for researchers to push the boundaries of research, as well as an excellent tool for professional development," said Eric Manuel, director of NREL's Office of Planning and Performance Management, which manages the LDRD program. "NREL's LDRD program enables scientists and researchers to do the kind of high-risk science that may lead to quantum improvements in how we fulfill future mission needs."

The LDRD program was critical in starting NREL's now very active research into a hybrid inorganic/organic perovskite material for solar cells, said Associate Lab Director Bill Tumas, who's closely involved in the selection process. "We had a lot of expertise related to this area but we weren't working with these materials directly, so we funded an LDRD project a couple of years ago. The goal was to have some of our really good people with device, spectroscopy, and materials science experience in related systems such as dye cells and solution-processed solar cells to build a capability at NREL to study perovskites. NREL is now the top cited U.S. institution in this area. We're very proud we were able to start with some small LDRD investments that led to significant results in applied and fundamental core program work."

Researchers at NREL and elsewhere have found perovskite solar cells to be highly efficient at converting sunlight into electrical energy. Ongoing work at NREL involves increasing the stability of these types of solar cells as well as further understanding their fundamental aspects.

The LDRD program also financed Jianping Yu's early efforts at NREL to produce ethylene from cyanobacterium rather than from petroleum and natural gas. Yu, a research scientist in the Photobiology Group who in November won a coveted R&D 100 award for his cyanobacterium work, said the LDRD program was "a critical funding source."

His initial success in the field enabled Yu to secure additional research funds from the Energy Department's Office of Energy Efficiency and Renewable Energy and the Office of Science.

"I certainly owe my success to LDRD support," Yu said.

The Energy Department authorizes each laboratory to use as much as 6% of its total operating and capital budget to fund the LDRD program. The Department created the program in 1985 as a way to give the Office of Science laboratories the means to support innovative ideas developed by researchers but that do not qualify for the usual program funding. NREL's LDRD program evolved from what was known as the Director's Discretionary Research and Development (DDRD) program. The final DDRD portfolio, in fiscal year 2006, consisted of 16 projects that represented a total of $3 million. In fiscal year 2015, NREL awarded $11.8 million to fund 59 LDRD projects. Across the Energy Department's national laboratories, $542 million was invested in 1,741 LDRD projects during that same year.

NREL scientist Andrew Norman uses a scanning transmission electron microscope in his lab at the Solar Energy Research Facility. Norman has worked on a handful of LDRD projects. Photo by Dennis Schroeder

While most of the LDRD projects last two to three years, those in the "seed" category are limited to a single fiscal year and intended to provide a path to a new innovation.

Equally important to note is that the LDRD projects must be aligned with the mission of the laboratory. At NREL, that means proposals have to encompass clean energy technologies in order to be considered.

"Even though a proposal may be innovative, it still has to fall within NREL's guidelines," said Sheila Terry, LDRD program administrator at the lab.

The projects chosen for the next round of funding are expected to be announced in late June.

The LDRD is used to finance what could be high-risk projects, those where the idea may lead to promising innovations or might ultimately go nowhere. As a condition of receiving LDRD funds, the researchers are required to regularly report how their work is going.

"You get a fair amount of autonomy to conduct research," said Bethany Sparn, an engineer on NREL's Residential Buildings research staff. "There are still scheduled deliverables and monthly status reports, but overall, you are given the freedom to plan and execute your project, which is not always the case with other sources of funding at NREL."

NREL also benefits from LDRD successes. The lab is able to secure additional contracts with federal agencies or with industry once researchers can point to leaps forward that come from LDRD-funded work.

"It's very difficult to write a proposal to an external agency these days without having initial results to report," said Andrew Norman, a principal scientist whose specialty is photovoltaics research. "It makes it a lot stronger if you already have some results generated under something like an LDRD program."

Norman has served as lead on four LDRD-funded projects and assisted with others.

"Not every idea that you try necessarily works," he said. "Most projects I've been involved with have resulted in some external funding and generated results for some good publications and/or patent applications. It's establishing your name and the lab's in a new field, which helps you."

Although NREL is staffed by scientists all working on renewable energy and energy efficiency, they don't share the same expertise. LDRD projects often require a multi-disciplinary approach, and part of what determines whether a proposal is funded is the strength of the team involved.

Annabelle Pratt and Bethany Sparn both work in NREL's Energy Systems Integration Facility, or ESIF, a building dedicated to exploring how renewable energy can best be connected to the nation's power grid. Pratt is in NREL's Power Systems Engineering Center while Sparn is in the Buildings and Thermal Systems Center, but the two are jointly running an LDRD-funded project.

The work sprang from an LDRD project they previously did with Mark Ruth, the principal project lead of the Strategic Energy Analysis Center. Ruth received funds in fiscal year 2014 to develop what's called an Integrated Energy System Model, or IESM. The project involved creating a platform that could simulate the effect of new technologies, including home energy management systems and different retail tariff structures, on the electric distribution grid. They also performed hardware-in-the-loop experiments with a real thermostat and air conditioner operated in conjunction with the simulation.

The current LDRD adds to that earlier research, incorporating a water heater, solar panels, and an electric vehicle in addition to the air conditioner. A simulation will take into account the amount of energy generated by the solar panels and the amount of electricity the various devices in the home demand. The devices also will be communicating with each other.

"We're pulling together people from a lot of different groups," Sparn said. "For a cross-cutting project like this, we need everybody's expertise. It's been a great experience to get to work with a lot of different people, and I think it makes us all better at our jobs."

NREL's LDRD program continues to grow and provide opportunities to staff members whose innovation and creativity knows no boundary.