NREL scientist Jianping Yu holds a petri dish of cyanobacteria culture being grown in his lab. He is working to cultivate various genetically engineered strains to promote ethylene production.
Photo by Dennis Schroeder

Here's the future of ethylene production as Dr. Jianping Yu sees it.

"We envision some farms in the field that cover many acres. We will have cyanobacteria harvesting sunlight and C02 and then produce ethylene or ethylene derivatives," said Yu, a research scientist in the Photobiology Group at the Energy Department's National Renewable Energy Laboratory. "That's pretty far from where we are now, but that's the goal. If things work out, 10 years from now we should see some farms making petrochemical replacements."

In much less time, Yu will learn in November whether his research will be named winner of an R&D 100 award, an honor sometimes called the "Oscars" of innovation. Yu is finalist in the Mechanical Devices/Materials category.

Yu already has proved a certain cyanobacterium can be genetically engineered to produce ethylene. Now it's time to take the research outside of the laboratory.

Currently made most often from petroleum and natural gas, ethylene is used in the manufacture of plastics and polyester, and ranks as the largest petrochemical produced by volume around the world. But the process of making ethylene requires considerable amounts of energy and releases carbon dioxide into the atmosphere.

Researchers in Japan in the late 1990s discovered a blue-green alga, Synechococcus sp. PCC 7942, could be modified to produce ethylene via photosynthesis by the introduction of the gene that codes for an ethylene-forming enzyme, or EFE. But that strain ran into problems as the amount of ethylene produced declined over time and by the fourth generation of the cyanobacterium production stopped entirely.

Building on that research, Yu turned his attention to a different cyanobacterium, Synechocystis sp. PCC 6803. Yu, who joined NREL in 2005, earned his doctorate from Michigan State University for his research into that strain.

Ethylene already can be made without fossil fuels through the conversion of bioethanol, but that requires making bioethanol plus an additional step. Yu's research showed ethylene could be made directly and continuously from cyanobacterium. Normally, algae convert carbon dioxide during photosynthesis into biomass or sugars. But Yu's method redirected the cyanobacterium to use a portion of the CO2 to produce ethylene. Ethylene rises to fill the headspace of a sealed glass tube or photobioreactor and can be easily captured. Since his initial discovery in 2010, Yu has managed to increase the amount of ethylene produced in the laboratory by more than a thousand-fold, to 35 milligrams per liter per hour.

His goal is to reach 50 milligrams by the end of the year. 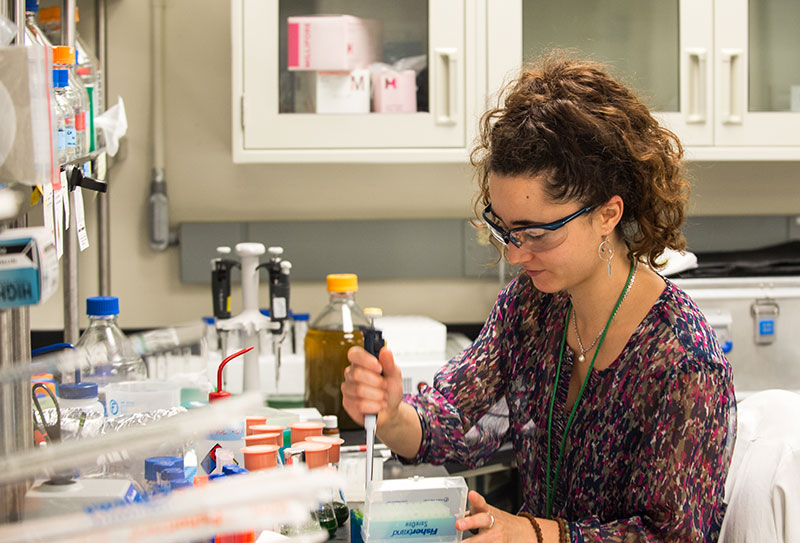 "The strain has been improved so much that at least 10 percent of fixed carbon has become ethylene," Yu said. "Maybe more. We demonstrate 10 percent. We do have newer strains that we haven't analyzed yet."

Perhaps even more importantly, Yu has been able to keep the cyanobacterium producing ethylene even as the organism itself continues to grow.

"There's an observation that despite the amount of CO2 the organism is turning into ethylene, which is substantial compared to the amount that it's turning into cells, there's no impact on the growth rate of the organism," said Philip Pienkos, principal manager of the Bioprocess R&D Group in NREL's National Bioenergy Center. "There are inherent inefficiencies in photosynthesis that limit the growth rate of any photosynthetic organism. But this bug is able to crank out a lot of product in addition to biomass. It's making ethylene and it doesn't affect its ability to grow. It's somehow correcting or overcoming some of that inherent inefficiency in photosynthesis.

"This is a totally unexpected observation that could have huge implications," he said.

NREL has applied for a patent on the photosynthetic ethylene process.

Yu, who had the help of post-doctoral researcher Wei Xiong for two years and now works with another post-doc, Bo Wang, has twice had his ethylene project pass muster by a peer-review committee at the Energy Department's Bioenergy Technologies Office. Members of the committee noted Yu's "remarkable progress" and his "innovative take on producing algal fuel co-products." But some also questioned the economics.

Ethylene made from petrochemicals costs between $600 and $1,300 a ton, while the cost to produce ethylene from cyanobacterium has been estimated at $3,240 a ton. The key benefit to making bio-ethylene would be in reducing the amount of carbon dioxide released into the atmosphere by the traditional ethylene manufacturing process. Making ethylene from fossil fuels generates between 1.5 to 3 tons of carbon dioxide per ton of ethylene; the bio-ethylene process removes 3.14 tons per ton of ethylene.

'Enough to Do for the Next Few Years' 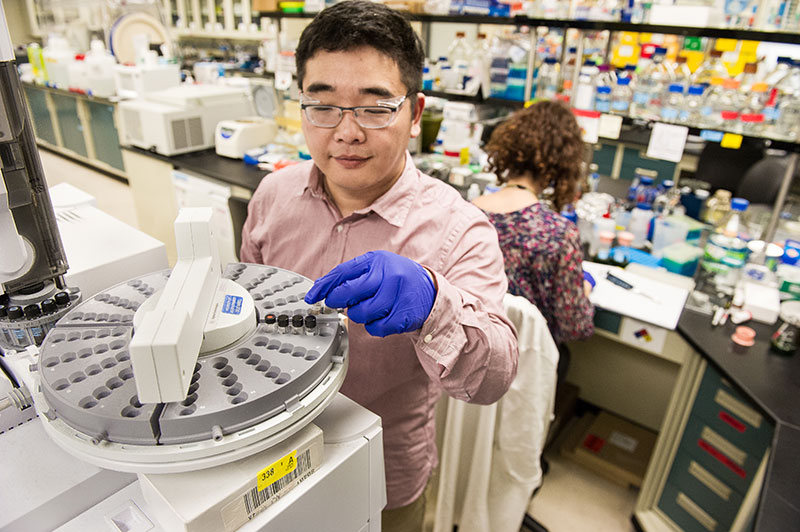 Yu said he doesn't know the percentage of ethylene he'll have to produce from photosynthesis before a company will want to license the method. But he knows companies are taking note of the research, which has been published in the journals Energy & Environmental Science, Biotechnology for Biofuels, Metabolic Engineering, and Nature Plants and verified by scientists at Cornell University.

"There is a lot of industry interest," Yu said. "We have had talks with multinational chemical companies, major energy corporations as well as startup companies. Companies are very interested in this because ethylene is a big deal. Ethylene is the largest produced petrochemicals worldwide. And considering our fossil resources are finite, biological conversion of CO2 into ethylene is very attractive."

Using cyanobacterium to make ethylene also avoids dipping into the supply of fresh water and food that's required to make bioethanol (and eventually ethylene) from corn. The blue-green algae can be grown in either saltwater or brackish water.

Looking to the future, Yu sees more work that must be done. He's run into a bottleneck in the lab where the amount of ethylene produced isn't keeping up proportionally with the increase of EFE enzyme. The level of alpha ketoglutarate also has dropped off, so Yu has developed ways to overcome that problem.

"The lab work has been progressing pretty well. I think we have enough to do for the next few years, just improving carbon conversion efficiency from 10 percent to 90 percent," said Yu. Another step is moving ethylene production beyond the lab.

Next Step: Going Outside the Laboratory

"Jianping and his group have been making steady progress in improving the productivity of the organism," Pienkos said, "but what we haven't done and what we intend to do hopefully in 2016 is establish a metric to show what this looks like in a real-world situation. We have to design a photobioreactor and we have to take it outdoors in order to really know what the promise is."

In moving the experiment beyond the lab, NREL is considering using a pond covered with a plastic tent to trap the ethylene. "There may be other configurations," Pienkos said. "All of this comes down to cost. For any algal biofuel, the majority of the cost comes from the cultivation system. That's true even if you have the simplest open pond. Putting a plastic tent over it will add a surprising amount of cost because you're talking about acres and acres of plastic."

The longevity of the strain Yu has been using serves to lengthen the time that can be spent on ethylene production.

"We've got data that we generated and data from Cornell that show prolonged activity of the bug over a period of months," said Pienkos, a founding member of the Algal Biomass Organization board. "That's a critical element. Every time you have to re-inoculate a pond or a bioreactor, you have a period where you're getting little or no product until they grow up to a certain point. You want to minimize that down time."