Between July 2009 and September 2013, NREL led a team to study the effect of system contaminants on the performance and durability of polymer electrolyte membrane fuel cells. The team, made up of industry, university, and national laboratory partners, screened about 60 balance of plant (BOP) materials using several screening methods. The materials are from different manufacturers, comprise different chemistries, and are used for different functions.

In order to make the results of this work more useful to the fuel cell community, NREL has designed an interactive material screening data tool to archive the results from these studies and make them publicly accessible. Knowledge of the material contamination potential of various system components can be used by the fuel cell industry in selecting appropriate BOP materials and in cost-benefit analyses.

This project was funded by the Fuel Cell Technologies Office in DOE's Office of Energy Efficiency and Renewable Energy.

Contact Huyen Dinh for more information on this project.

Our initial focus has been on commercially available commodity materials with a range of costs. These materials are generally developed for other applications for which common additives/processing aids may not be a concern, but they may present problems for fuel cells. 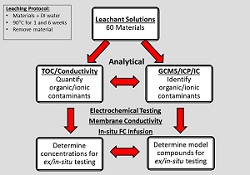 The team also performed fundamental studies of selected organic model compounds that were found in the leachates.

NREL has designed an interactive material screening data tool to help fuel cell developers and material suppliers explore the results from these studies, which were performed in collaboration with General Motors, the University of South Carolina, and the Colorado School of Mines. To use the tool, select from the drop-down lists of materials to see the screening data collected from multiple methods. You can also view the data tables.

Use the data tool

Between July 2009 and September 2013 the project team included the following members: