NREL is working to advance foundational science and translate advances in distributed optimization and control into breakthrough approaches for integrating sustainable and distributed infrastructures into our energy systems.

The electric power system is evolving toward a massively distributed infrastructure with millions of controllable nodes. Its future operational landscape will be markedly different from existing operations, in which power generation is concentrated at a few large fossil-fuel power plants, use of renewable generation and storage is relatively rare, and loads typically operate in open-loop fashion. 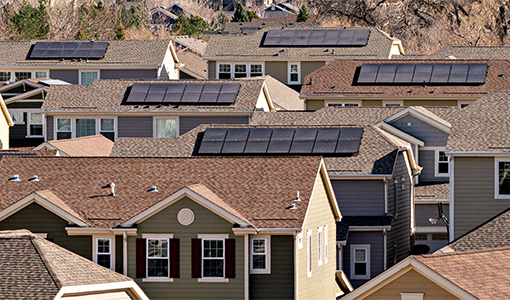 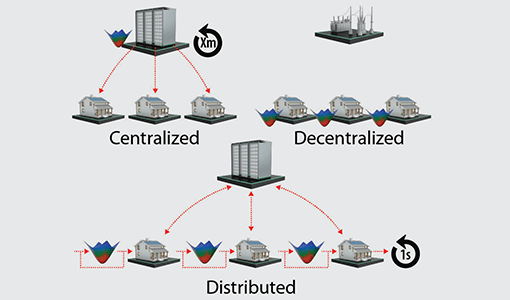 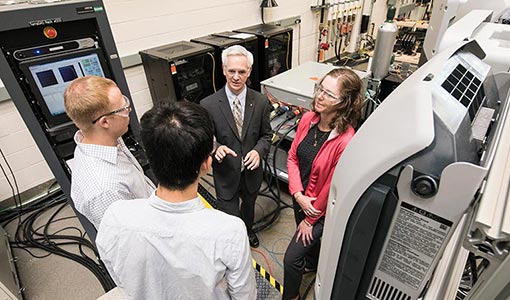 Grid resilience and security are critical to power and energy systems, yet increasing weather-related disasters and cyberattacks underscore the vulnerabilities of our electric grid. This project advances the foundational science of power and energy systems resilience and develops a theoretical and algorithmic framework for real-time resilience of highly distributed energy systems. The goal is to represent a complex energy system and steer it through a disruption event while minimizing the effect of the disruption and the recovery time. The approach leverages foundational science in adaptive and robust control theory, artificial intelligence and machine learning algorithms for control, graph theory, and uncertain dynamical systems.

This project advances the science behind asynchronous control and monitoring of power systems, with a particular focus on distribution grids. Distribution grids are inexorably changing at the edge, where a massive number of distributed energy resources, smart meters, and intelligent sensors and actuators—broadly referred to as Internet of Things-enabled devices—are being deployed. Thus, distribution grids are evolving from passive to highly distributed active networks capable of performing advanced tasks and enhancing robustness and resilience. This project will produce innovative asynchronous control, optimization, and estimation schemes that are grounded on solid analytical foundations. The benefit of the proposed algorithms will be shown through extensive simulations that leverage the autonomous energy systems simulation framework.

Reinforcement learning results in near-optimal decision-making in unknown environments by leveraging past experience. Significant progress has been made in this field; however, its applicability to controlling highly distributed, large-scale physical systems is limited. The reasons are:

This project will tackle decentralized control and coordination tasks in highly distributed infrastructure systems such as power grids. The devised decentralized learning techniques will produce accurate and robust methods that represent a leap toward human out-of-the-loop decision-making. The solutions will maximize the value of contemporary energy systems and allow for optimal and scalable use of resources.

The state of the art on microgrid operation typically considers a flat and static partition of the power system into microgrids that are coordinated via either centralized or distributed control algorithms. This approach works well on small- to medium-size systems under normal or static operating conditions. However, it becomes infeasible when the number of controllable distributed energy resources approaches millions. Moreover, the static partition into microgrids is inadequate from the resilience perspective. Indeed, a partition that is best for normal operation might be disastrous during major disruptions. And vice-versa: A partition that is best during disruptions might be suboptimal during normal operation. Moreover, even during normal operation, the optimal partition may change over time (e.g., because large numbers of electric vehicles dynamically change the loading conditions in the network). This calls for dynamic microgrid formation with a multiresolution control structure, laying the foundation for the vision of a fractal grid.

In this framework, microgrids self-optimize when isolated from the main grid and participate in optimal operation when interconnected to the main grid using distributed control methods. We adaptively define the boundaries of microgrids in real time based on operating conditions. In particular, when a disruption is identified:

The growth of PV capacity has introduced distribution system challenges. For example, reverse power flows increase the likelihood of voltages violating prescribed limits, while fast variations in PV output tend to cause transients that lead to wear-out of switchgear. Recent distributed optimization and control approaches that are inspired by—and adapted from—legacy methodologies and practices are not compatible with distribution systems with high PV penetrations and, therefore, do not address emerging efficiency, reliability, and power-quality concerns.

This project developed distributed controllers that were validated via comprehensive and tiered software-only simulation and hardware-in-the-loop simulation. Microcontroller boards were used to create and embed the optimization-centric controllers into next-generation gateways and inverters.

The objective of this project is to advance the foundational science for control and optimization of multi-energy systems by:

Departing from existing approaches based on off-the-shelf black-box tools, the project produced innovative, computationally affordable distributed optimization and control schemes that are grounded on solid analytical foundations and will pave the way to the next -generation real-time control architecture for integrated energy systems.

Online Optimization as a Feedback Controller: Stability and Tracking, IEEE Transactions on Control of Network Systems (2019)

View all NREL publications about distributed controls and optimization.