The Renewable Electricity Futures Study (RE Futures) is an investigation of the extent to which renewable energy supply can meet the electricity demands of the continental United States over the next several decades.

RE Futures, funded by the U.S. Department of Energy's Office of Energy Efficiency and Renewable Energy, is a collaboration with more than 110 contributors from 35 organizations including national laboratories, industry, universities, and non-governmental organizations.

As the most comprehensive analysis of high-penetration renewable electricity of the continental United States to date, the study can inform broader discussion of the evolution of the electric system and electricity markets toward clean systems. RE Futures results indicate that renewable generation could play a more significant role in the U.S. electricity system than previously thought and that further work is warranted to investigate this clean generation pathway. 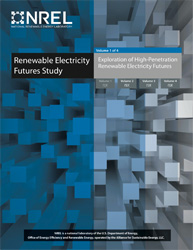 Envisioning a Renewable Electricity Future for the United States, Energy (2014)

These visualizations are based on RE Futures modeling and represent the transformation of the U.S. electric system to a high renewable system from 2010 to 2050 and the hourly operation and transmission flow of that system in 2050.

Transformation of the Electric Sector

Energy Models Used in the Study

Six Myths about Renewable Energy: The Impact on Jobs and Other Assumptions That Don't Hold Up Anymore, Wall Street Journal (2013)

U.S. Renewable Electricity Future Is Within Reach , The Union of Concerned Scientists (2012)