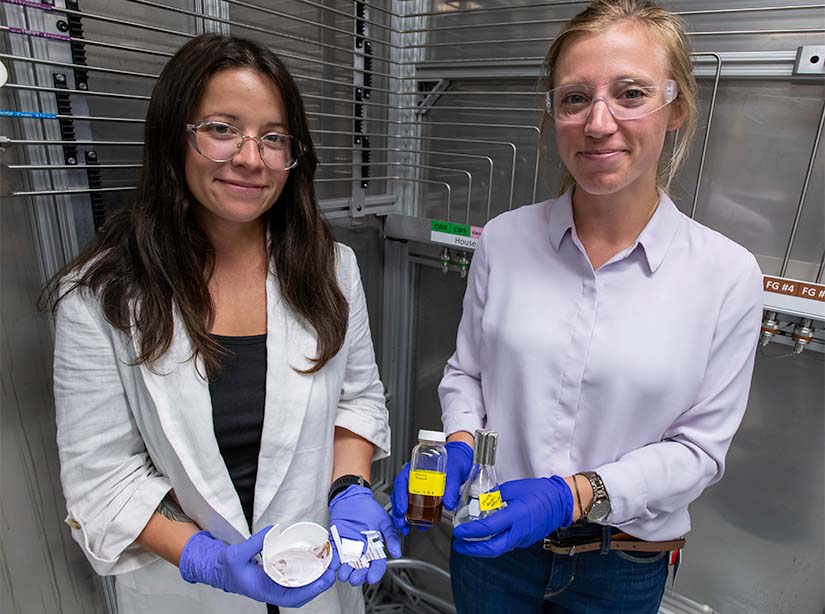 NREL researchers Katrina Knauer and Allison Werner will study how spaceflight can affect the composition and function of microbial activities. Photo by Bryan Bechtold, NREL

This research aligns with one of NREL's critical objectives.

Researchers at the National Renewable Energy Laboratory (NREL) will send an engineered bacteria into space as early as next year as part of ongoing research into solving the problem of plastic waste mitigation on Earth.

Deconstructed plastics, using the NREL oxidation platform, will be flown to the International Space Station (ISS), where astronauts will conduct an experiment involving bacteria engineered to upcycle oxidized plastic. The Center for the Advancement of Science in Space (CASIS) selected the NREL project as part of the ISS National Laboratory Sustainability Challenge: Beyond Plastics. The beauty brand Estée Lauder is providing financial backing for the challenge, with costs going to ISS National Laboratory partner Rhodium Scientific to provide engineering and flight support.

The NREL effort will see astronauts expose a mixture of oxidized plastic waste (a Styrofoam cup, which is made of polystyrene; a Dr Pepper bottle made of polyethylene terephthalate; and a milk jug made of high-density polyethylene) to an engineered strain of Pseudomonas putida. While these types of plastics can be recycled, the process of separating each can be time-consuming and costly. Scientists have been exploring technologies that are robust to plastic mixtures. Researchers at NREL have been developing a chemo-biological platform that uses oxidation to break down mixtures of plastic waste into bioavailable intermediates that can be funneled by engineered bacteria to yield a single bioproduct, thus overcoming the economic barriers of plastic sortation.

“We’re combining chemistry and biology into an integrated process, and space comes into play on the biology part,” said Katrina Knauer, a polymer scientist at NREL and chief technology officer of the U.S. Department of Energy’s BOTTLE Consortium, which is based at NREL. BOTTLE, which stands for “Bio-Optimized Technologies to keep Thermoplastics out of Landfills and the Environment,” and is funded by the Bioenergy Technologies Office and Advanced Manufacturing Office, is dedicated to finding ways to address the plastics problem. BOTTLE estimates 5.7 billion metric tons of discarded plastic has never been recycled.

Before going into space, the plastic will be subjected to an accelerated oxidation process that breaks down the chemical bonds of the materials, creating a carbon source for the bacterium. The bacteria then convert the plastic-derived chemicals into new bioproducts that can be sold back into the chemical supply chain.

The scientists hypothesize that the conditions of spaceflight—such as microgravity and increased radiation—could boost the performance of the engineered bacterial strain.

“Researchers have found that exposure to microgravity conditions onboard the ISS can affect the composition and function of microbial activities, and in some cases, increase the metabolic activity,” Knauer said. “Essentially, we can use conditions onboard the ISS to push the limits of this bacteria and generate new strains on Earth. In other words, no carbon left behind.”

Knauer is joined in this project by Allison Werner, a cell and molecular biologist at NREL. Knauer and Werner will work directly with the astronauts to prepare them to conduct these experiments. After the astronauts complete the incubation experiment for NREL on the ISS, the samples will be frozen and returned to Earth for characterization and further microbial engineering. The scientists will then determine if the proteins and enzymes produced by the bacterium in space can digest plastic even more efficiently.

“We have this incredible opportunity to go to space. How can we leverage the unique stressors of spaceflight to learn something new about our bacterium?” Werner said. “Something that we’ve barely scratched the surface of is microbial evolution in spaceflight. We have an opportunity to understand how evolutionary trajectories can change, and potentially improve, our strain during spaceflight. If these improvements can be linked to DNA edits, we can put the changes back—through genetic engineering—into strains that are active on Earth.”

Werner said the genome of the spacefaring bacterium will be mapped and compared to its Earth-bound counterpart to see what evolutionary differences occurred. If the scientists determine a change occurred and prove that it caused an improvement in the bacterium’s ability to convert oxidized plastics into new materials, further genetic engineering can take place to improve the bioprocess on Earth.

In addition to Knauer and Werner, the NREL team includes Kelsey Ramirez, who analyzes the chemical composition of deconstructed plastics and bacterial cultivations. Olivia Gamez Holzhaus, founder and CEO of the Houston-based biotechnology company, Rhodium Scientific, has signed on as an industry partner for the project.