Findings Pave the Way for a Net-Zero-Carbon Transportation Future

Just as the wheels keep turning on cars, trucks, and trains, the planet keeps spinning in its orbit. All the while, climate change is accelerating, along with the dire need to cut greenhouse gas (GHG) emissions responsible for global warming. Transportation activity releases 1.5 billion tons of GHGs into the atmosphere every year.

Fewer Emissions, Greater Efficiency for All Types of On-Road Vehicles

Experts from NREL and eight other national laboratories set out to give American industry and policymakers the scientific knowledge, data, and tools needed to decide which new fuel-engine combinations could most realistically benefit drivers, businesses, and the environment.

The results? Identification of domestically sourced, bio-based fuel components that meet or exceed DOE's target of 60% fewer GHG emissions than those generated by petroleum-based fuels used in on-road vehicles.

Co-Optima research also revealed ways to improve fuel economy by 10% for today's turbocharged car engines and an extra 14% using advanced engines. In addition, the scientists explained how it might be possible to eliminate more than 99% of some of the most harmful freight truck criteria pollutants at the same time as improving engine efficiency by up to 4%.

"When we launched the Co-Optima initiative, we just hoped we could move the needle a little bit," said NREL Vehicle Technologies Program Manager John Farrell. "While reaching net-zero transportation emissions means many sweeping changes, such as eventually a huge shift to electric vehicles, co-optimization can make a real difference in the meantime—especially for hard-to-electrify vehicles."

Farrell served as Co-Optima project leader from its early planning stages and 2015 launch through December 2018.

Co-Optima researchers focused on identifying and understanding fuel components known as blendstocks, which can be combined with existing fuels to improve vehicles' carbon footprint and engine performance. The team screened more than 1,000 options to pinpoint high-performing blendstocks that can potentially be produced at commercial scale from the estimated billion-ton annual supply of domestic biomass resources.

"While we might not ever be able to turn absolutely all of the one billion tons of sustainable feedstock into transportation fuel," McCormick said, "we now have a solid understanding of what sources will come closest to delivering the characteristics, performance, and environmental benefits needed, while also being viable for commercial production and affordable prices at the pump."

Along the way, Co-Optima scientists, engineers, and analysts from NREL and other laboratories invented new methods and tools to expand understanding of combustion and fuel properties. NREL's Co-Optima fuel chemistry research included:

Making sure new fuels and engines can be scaled up for commercial production, will be compatible with fueling infrastructure and vehicle components, and can be produced at competitive cost are all vital factors in bringing cleaner, more efficient transportation solutions to market. Co-Optima researchers from NREL and other laboratories used techno-economic and life cycle analyses to assess blendstocks' technology readiness, market viability, and environmental impacts. 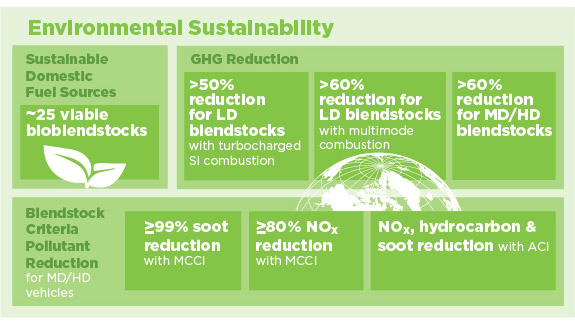 Strategies explored by Co-Optima have the potential to deliver significant efficiency and environmental benefits.

The Road Ahead to Net-Zero Emissions

The combination of sustainable fuels uncovered by Co-Optima research can reduce the emissions of vehicles now, while enabling a faster transition to net-zero-carbon emissions for on-road transportation in the future. Efficient pollution-reducing fuels and engine technologies identified by Co-Optima researchers may also help cut pollution from marine, rail, off-road, and aviation engines.

Fuels produced from biomass—such as forestry and agricultural byproducts, algae, discarded cooking oil, and even manure—could eventually meet 100% of future demand for air, marine, and rail fuel. That would still leave enough to meet the fuel needs of long-haul freight trucks that are harder to electrify.

By reducing criteria pollutant and GHG emissions, Co-Optima approaches can also help diminish the concentration of poor air quality near highways and transportation hubs that are frequently located near underserved populations. This can help limit the impact of climate change on vulnerable communities. In addition, biofuel production can boost the economy and create jobs in rural areas.

NREL and its partners know that many challenges remain in the effort to reach net-zero emissions by 2050.

"Manufacturers still need to see what other changes will be necessary to ensure new sustainable blendstocks are compatible with commercial engines," McCormick said. "Once that happens, the fuel–engine combinations identified through Co-Optima can make important contributions to the nation's battle against climate change."

Read the full report or summary, learn more about the Co-Optima initiative, and learn about NREL's involvement in Co-Optima and other transportation research.