There are nearly 100 island communities in the United States and its territories. Many more U.S. communities are "islanded," meaning their connection to a centralized electric grid is nonexistent or tenuous because they are remote, rural, or both.

As a result, these communities—vastly different in terms of size, geography, climate, culture, and economy—all face significant energy and infrastructure challenges. Although the challenges vary widely, they all create similar risks and vulnerabilities for the people who call these places home.

Funded by DOE's Office of Energy Efficiency and Renewable Energy, ETIPP provides answers to community questions about increasing energy resilience, with a range of resources and technologies, such as water, solar, wind, and geothermal power; microgrids; rate structures; energy efficiency and storage; and electric transportation.

With 12 more communities joining ETIPP in 2022, DOE is expanding its partnership with remote and island areas seeking to shore up their energy vulnerabilities and reduce their risk.

The first 11 communities selected in April 2021 began working with the ETIPP partner network last fall to navigate their options for transitioning to clean, resilient energy systems. Roughly midway into their ETIPP journeys, these pioneers are making headway, as divergent as their paths may be.

Take Oahu, Hawaii, and Ouzinkie, Alaska. As islands go, they could not be more different. Yet both are confronting energy and infrastructure challenges that place their communities at significant risk. And despite the obstacles presented by the COVID-19 pandemic, each island is charting its own course to a clean and resilient energy future, relying on local knowledge, skills, and insights while leveraging expert energy analysis.

Aptly nicknamed "the gathering place," Oahu is a 600-square-mile island inhabited by 1 million people. Isolated from the nearest landmass by 2,400 miles, Oahu imports 90% of its food and fuel.

Along with the economic stressors stemming from extreme dependence on imported fuel, Oahu residents face outsized threats associated with severe weather events, which have the potential to cause long-duration power outages. Restoring power can take weeks or months due to the location of isolated electrical infrastructure and shipment times required for fuel and materials. 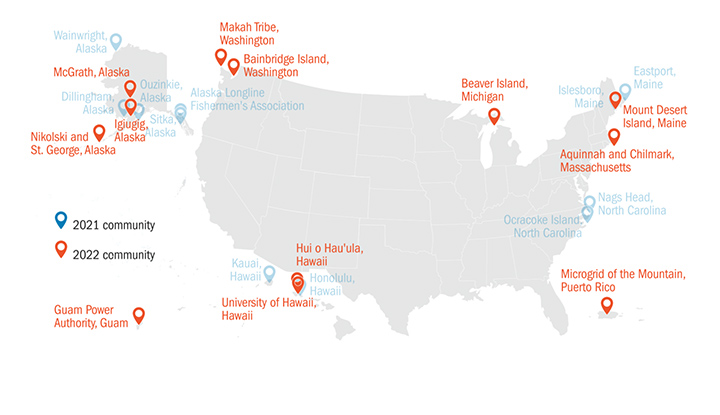 Microgrid of the Mountain, Puerto Rico

Hawaii has identified hybrid microgrids as one potential pathway to mitigate these risks and vulnerabilities. In 2021, the Hawaii Public Utilities Commission approved an initial microgrid services tariff (MST), which clears the way for hybrid microgrid development as a means of improving the resilience of electricity customers served by these systems.

Through ETIPP, Hawaiian Electric (HE) is partnering with NREL, Sandia National Laboratories, and the Hawaii Natural Energy Institute to create a map identifying potential locations for hybrid microgrids under 3 megawatts based on a set of criteria prioritized by stakeholders.

Like the Ancient Polynesian voyagers whose wayfinding skills led them to the Hawaiian Islands, ETIPP's local and national partners are navigating uncharted waters as they pull together in pursuit of a more resilient Oahu. The resulting map may help guide developers to areas for further microgrid analysis and development based on the defined criteria, potentially increasing awareness and streamlining the development process.

Raising awareness is a key goal for Ken Aramaki, HE's director of transmission & distribution and interconnection planning. HE identified the map as a way to boost interest in the Public Utilities Commission-approved MST they developed. "We have yet to receive a formal application in this process," Aramaki said, "which tells us tools like the map are needed to help customers understand where hybrid microgrids may be suitable for development."

ETIPP presented an opportunity to help advance the state's resilience goals and better serve HE's customers by meeting them where they are.

"I hope the community will see that we are trying to do things that ultimately help them find solutions or have choices," said Aramaki, who has firsthand experience with how long-duration power outages affect families.

He was attending second grade on Kauai when Hurricane Iniki hit the island in September 1992. "I remember electricity being out for months in certain areas of the island," he said. Along with missing school, he remembers his parents going to great lengths to adapt to the lack of basic infrastructure.

"Among other stresses like cleaning up and finding ways to cook food, they had to go get water somewhere else and boil it just so we (the kids) could have some semi-warm water to rinse ourselves," he recalled, "Now that I work at Hawaiian Electric, these experiences are always on my mind because the fact that we are located in the middle of the ocean won't change, and getting critical equipment here will continue to be a challenge."

Some 2,500 nautical miles to the north—in Ouzinkie, Alaska—the man in charge of keeping the lights on in his village knows exactly how Aramaki feels. Mayor Elijah Jackson has been working to repair Ouzinkie's hydropower plant since it stalled in 2019, leaving the community 100% reliant on costly imported diesel fuel.

The Native Village of Ouzinkie derives its name from the Russian phrase uzen kii, or "rather narrow."  That describes the 12-mile strait that separates the six-square-mile sliver of land on Spruce Island from the city of Kodiak on southern Alaska's Kodiak Island.

It also describes the economic margin Mayor Jackson is working within to keep electricity affordable for community members. "Right now, we're spending $21,000 a month on fuel, and we're a tiny community [of] 130," he said. "I'm almost being forced to raise the rates, and I don't want to do that. It's getting too expensive for the people that are from here to live here anymore."

In the meantime, he's finding ways to adapt. Adaptation is a common theme across the remote Kodiak Archipelago, a region defined by its rugged landscape, unpredictable climate, and resilient people. And adaptability is a mainstay for Ouzinkie, which is currently carving out its self-defined path toward a more resilient energy future.

In the Alaskan bush, it is known as bushwhacking, a skill Jackson relies on regularly in leading Ouzinkie's energy transition. A major goal for the mayor is restoring the hydropower plant operations in Ouzinkie. "That can carry the load for the community, and that cuts our fuel bill in half instantly," he said. While waiting for the hydropower plant to be restored, Jackson has found inspiration to explore other local energy resources through ETIPP.

A key driver of his decision to apply for ETIPP was the need for reliable, accurate research and analysis the community can use to determine the optimal path for adding more energy generated from local renewable resources to Ouzinkie's grid system.

Under normal circumstances, the ETIPP team would have visited the village early in the project to put all hands on deck and begin building relationships. But the pandemic precluded that, leaving much of the data collection to Mayor Jackson.

If COVID travel restrictions continue to ease and clear the way for the ETIPP team to visit Ouzinkie in mid-June, "The labs will have an opportunity to share their analysis with both the core team in Ouzinkie and the broader community, get direct feedback that we can incorporate into our final products, and make a personal connection with the community," said Pacific Northwest National Laboratory's Alice Orrell, an analyst on the project.

"Their presentation will get the community really fired up," said Jackson, who anticipates a big turnout.  "We need all the research. We need basically a shovel-ready project to get our community to be able to convert to renewable resources."

The ETIPP team's analysis will inform a strategic plan the mayor intends to leverage to secure the grants needed to co-fund sustainable energy solutions. "What I'm hoping is that we can actually lower rates and create long-term jobs with these projects that come out of the ETIPP program, and long sustainability for the people that live here," Jackson said.

In Ouzinkie, as in Oahu, there is a longer-term vision driving the ETIPP work—one that extends far beyond their borders.

"We're hoping to be a success story and to be able to show and share everything with the other villages around here," Jackson said. "They're all coastal communities and have tons of renewable energy resources. We're just hoping we can be a beacon to them and say, ‘Hey, this is what we did. This is the path you can follow.'"

In Oahu, Aramaki hopes their map will serve as a starting point for follow-on hybrid microgrid planning analyses, community and developer engagements, and customer benefits assessments.

"We have five islands in our service territory," Aramaki said. "We plan to use this as a framework that we can apply to the other islands. If it is translatable, that is something other islands could use to their benefit."

In keeping with ETIPP's long-term goal to complete replicable projects that transfer successes and lessons learned, both communities are halfway through a journey that the newest 12 ETIPP communities are just beginning. The collective experience and insight they accrue along the way may help guide others toward a resilient energy future.