Uniting the Eastern and Western U.S. electric grids could offer significant value in strengthening the power system's ability to share generation resources and flexibility across regions, according to the Interconnections Seam Study. Results of the multiyear analysis were recently published in the journal IEEE Transactions on Power Systems.

"With variable renewable resources like wind and solar contributing an increasing share of our nation's electricity supply, the ability to transfer those resources across regions could be incredibly valuable—whether that’s in periods of power system stress, like extreme weather, or during a typical day when we want to take advantage of the best available resources," said Josh Novacheck, National Renewable Energy Laboratory (NREL) senior research engineer and technical lead for the study. "In the Interconnections Seam Study, we quantified the overall value to support utilities, developers, regulators, and policymakers in their efforts to prepare the grid for the future."

Using a novel multi-model method that cost-optimizes both generation and transmission resources across the United States, researchers developed and studied four transmission grid designs to explore their potential costs and impacts. Results show that increasing the transmission capacity between the Eastern and Western Interconnections could enable more economically efficient and flexible exchange of power throughout the United States—with scenarios showing up to $2.50 in benefits for every $1 of cost.

The research was conducted by NREL researchers Novacheck, Greg Brinkman, and Jessica Lau, and led by former NREL researcher Aaron Bloom, in collaboration with partners from other U.S. Department of Energy (DOE) national laboratories, Iowa State University, and industry. A technical review committee with representatives from more than 20 utilities, power system operators, and industry organizations helped guide the study by reviewing its assumptions, scenarios, methods, and findings.

Stitching Together the Seam To Strengthen the System 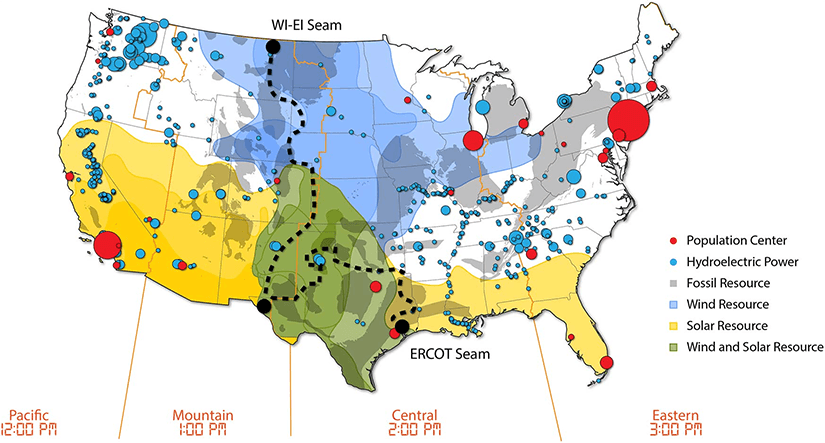 "The transfer capability between the interconnections is not much more than a rounding error compared to the size of the networks they connect," said Greg Brinkman, NREL senior research engineer and co-author of the study. "However, these facilities are aging rapidly, so their potential replacement and expansion presents a timely opportunity to modernize the U.S. electric grid."

Fast forward nearly 100 years, and a variety of challenges have barred nationwide HVDC transmission designs from development thus far. At the same time, wind and solar have emerged as key players in the electricity generation mix—so modern times call for fresh approaches for planning the future grid.

They developed four transmission designs: (1) one in which existing seam capacity was maintained, (2) one in which back-to-back converter stations were expanded, (3) one that added three new HVDC transmission segments, and (4) one that simulated a national-scale HVDC network or "macrogrid." Note: The study did not explore connectivity with the Electric Reliability Council of Texas.

"We can extend this foundational study and modeling framework to the higher levels of renewable generation and active demand-side participation envisioned in current national decarbonization targets," said Jessica Lau, NREL grid systems group manager and co-author of the study. "In those futures, enabling greater flexibility in shifting renewable resources where and when they're needed across the nation is critical to utilize all resources to support people and their fundamental right to electricity."

As modeled in the study, the power system was able to balance electricity generation and demand with less total system installed capacity across each of the scenarios, thanks to increased operating flexibility as well as taking advantage of geographically diverse demand and generation.

Across all the scenarios studied, the results show a robust benefit-to-cost ratio ranging from 1.2 to 2.5 over different HVDC designs and different conditions, indicating significant value to increasing the transmission capacity between the interconnections and sharing generation resources. New transmission lines would likely be heavily used during challenging operational periods throughout the year, such as heat waves or extreme weather.

"Notably, the cost-to-benefit ratios we found do not reflect additional potential benefits, like increased resilience of the electric system to continue supplying low-cost energy during catastrophes such as large hurricanes and widespread wildfires," Brinkman said. "These types of extreme events weren't studied in detail for this study, but are the subject of ongoing work."

The importance of being able to shift power where it is needed most can be seen in action, thanks to a series of animations available on the NREL Learning YouTube Channel. Created by NREL's data visualization experts, these videos show modeled hourly system-wide generation and transmission flows across the United States under different scenarios and system conditions.

To watch this video in high definition, click play, then click the gear icon, click quality, and select the highest option. You can also expand the video for full-screen viewing.

"Looking at the flow of power across our macrogrid design on a peak load day in August, you can see how transmission can help the system get out of tricky load-balancing situations," said Aaron Bloom, Energy Systems Integration Group board member and lead author of the study. "In this future power system, extra solar generated in the Southwest could be used to meet peak electricity demand in the East. Then, as the sun sets in the West, the strong wind resources in the Midwest and Great Plains could be dispatched in the other direction."

Insights from the Interconnections Seam Study provide new tools to help decisionmakers evaluate strategies for strengthening the evolving grid. Future work to build on the analysis could further examine the technical and economic benefits of the alternative grid designs or assess system reliability, security, and resilience, among other topics.