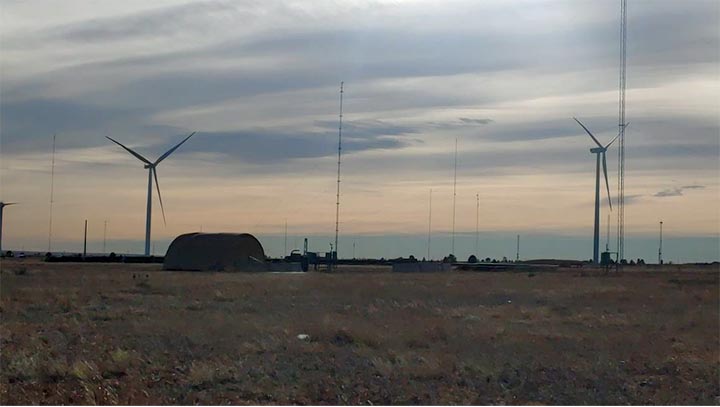 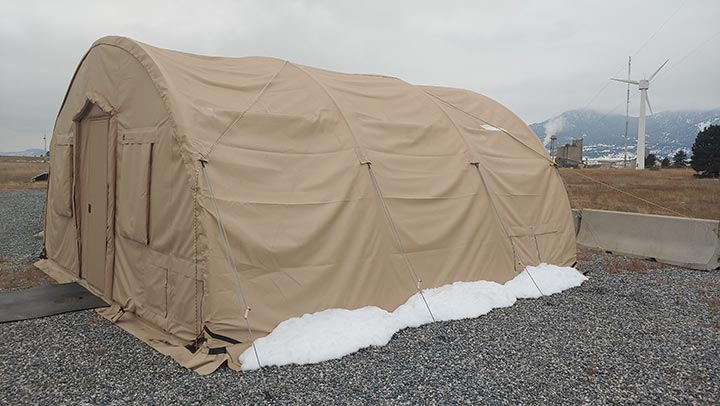 Quonset huts at NREL replicate military microgrid environments so that DOD and partners can reliably evaluate energy security with renewables and battery storage.

High winds, a beaming sun, a remote landscape—the National Renewable Energy Laboratory's (NREL's) Flatirons Campus might be a familiar environment to military servicemembers. Here at "Fort Renewable," down a dirt road from the main research campus, military Quonset huts are dispersed among energy assets like solar photovoltaics and battery storage.

Compared to a real military base, the Fort Renewable setup is not so much forward-operating as forward-thinking, with its own critical mission: to design high-renewable systems for secure applications. With unique cyber and physical capabilities, NREL's microgrid research platform is the scene of large-scale grid demonstrations that are helping the military, microgrid, and energy storage industries transition past technical barriers toward extreme renewable integration.

A Competition To Create Quality Microgrids

Microgrids are nothing new to the military, and especially nothing new for NREL–Department of Defense (DOD) collaborations. But as new threats emerge on energy systems—generally cyber and environmental—the DOD is now looking to bolster its backup power with battery storage, in place of a current preference for diesel generators.

"We've had military microgrids for 20 years now," said Brian Miller, a senior NREL researcher and microgrid research lead. "But we didn't have batteries back then, and very little solar."

Relying on diesel generators alone could put microgrids at risk. If a true disaster scenario takes down the grid for an extended period, the military's old diesel generators would not survive multiweek outages.

"Renewables and battery storage have the potential to last longer on fuel supplies and provide important energy diversity," Miller said.

To discover the best microgrid-storage implementations across its diverse sites, the DOD arranged a unique program that is half competition, half technology accelerator. Under the program, the early-stage companies have been invited to validate their microgrid solutions on progressively more realistic grid systems, and progressively more challenging platforms. This way, companies can quickly gain field experience, DOD can confidently invest in its own microgrid improvements, and the experimental results will be widely available as stakeholder resources.

The project is facilitated through the DOD Environmental Security Technology Certification Program (ESTCP) and therefore inherits the program's goal of assisting early-stage commercial products past the difficulties of breaking into the market. Each participating company is matched with an industry principal investigator, forming teams of two that apply the commercial concepts to real microgrid operations.

The validations got underway in 2020. While each of the participating teams are ultimately striving to prove their technologies at an actual DOD base, they first must advance through two lower-fidelity trials. These initial validations are taking place at NREL, where energy systems can be emulated to exact similarity under most any scenario.

Building Military Microgrids at a Replica Base

In preparation for the program, NREL refashioned its world-class power systems research platform ARIES into a distributed military microgrid—off-grid as a DOD base might be, but with high-performance experimental assets like weather stations and six-strand fiber optic communication links. At NREL's Fort Renewable, DOD and participating companies have now been able to truly validate and derisk commercial microgrid systems.

Each team's microgrid-battery storage solution is tested against emulated power outages, which the microgrid controls must be capable of managing.

Phase 1 of the program brought seven teams to NREL, where their microgrid-storage concepts were plugged into virtual systems and analyzed with simulated operations. This first phase validated teams' technologies on a model military base, testing whether the devices could respond with a baseline level of performance, and filtered the number of participating teams down to four. Phase 1 results are available on the ESTCP website.

Phase 2 of the project raised the bar higher: Teams have submitted their technologies to more rigorous validations on a near-exact approximation of DOD's Naval Air Station Patuxent River (NAS Patuxent River)—a 34-MW Air Force base in Maryland—replicated right inside NREL.

"Our platform is built such that users can prove their designs for islandable microgrids that are able to provide power in a long-duration emergency at a reasonable cost," said Miller, who led the development of the military microgrid research platform. "Doing a study is one thing, but you can't pencil whip whether a power hardware is successful. That's why these companies come to NREL. If they can leverage our capabilities, it's huge."

Miller, himself once a major in the U.S. Air Force, has a career's worth of energy resilience experience drawn from service overseas and across the United States, and used his background to build out the replica research environment.

The research platform involves about 250 kW of hardware, which is variously swapped with teams' technologies—everything from microgrid switches and controllers to batteries. The teams rely on NREL for the rest of the microgrid environment: power and grid emulators, SCADA networks, switchgear, load banks, renewable resources, and a replica of the NAS Patuxent River grid.

And that covers just the hardware. The full platform crosses nearly every lab space in NREL's Energy Systems Integration Facility and connects out to the Flatirons assets miles away. An integrated Cyber-Energy Emulation Platform (CEEP) digitally emulates communications and controls for the microgrids, while a vast sensor network simultaneously collects power data at all points throughout the microgrid and visualizes interactive metrics in real time. All told, the military microgrid research platform is as close to real as the teams will experience until Phase 3.

Microgrid Lessons for a Larger Grid

Each team has a different approach to microgrid-storage solutions: One is using redox-flow batteries, others bring their own microgrid controllers, and another is validating lithium iron phosphate battery storage. As of Phase 2, the participating teams are led by Ameresco, the Energy Power Research Institute, Raytheon, and SRI and Arizona State University. Cummins, which helped NREL build out the military microgrid research platform and contributed its microgrid controller to the design, has also thrown its hat into the program. NREL could not resist entering the action as well.

The teams have an important stake in the program—successful validations could carry their products from relative obscurity to energy markets anywhere, with the bonus of being proven in highly demanding applications. But the larger energy industry stands to gain something more: The demonstrations are establishing first-ever data around what works for critical applications of energy storage in microgrids.

"This project is about learning how critical loads can survive disaster and outage scenarios," said Martha Symko-Davies, laboratory program manager of the ESIF. "We're not validating microgrids for the military only; we want to do this for the whole country. Future campuses and microgrid systems will look to this project for examples, and to NREL for microgrid research capabilities that exist nowhere else."

In this perspective, project teams endure the hardest tests so that future microgrids can better survive worst-case scenarios. NREL validations force difficult decisions that a critical microgrid could encounter, like choosing between multiple critical loads. For participating teams, their early-stage concepts that have scarcely seen commercial applications are up against disasters that any system would hope to never see, but nevertheless must prepare for.

"Some universities maintain billion-dollar inventories of temperature-controlled cell cultures, for example. This is a critical load compared to other buildings on campus, and a functional microgrid should be able to allocate power accordingly," Miller said.

NREL is advancing distributed grid and microgrid control and optimization solutions through research such as Autonomous Energy Systems and products like OptGrid.

As the participants move to Phase 3 of the program—installation at one of seven DOD microgrid sites—industry moves one step closer to resilient renewable microgrids. For all the expectations that microgrids and renewables could reliably support critical loads, a new class of commercial players is arriving with the first data to show exactly how.

Learn more about microgrids at NREL and our partnership with DOD.