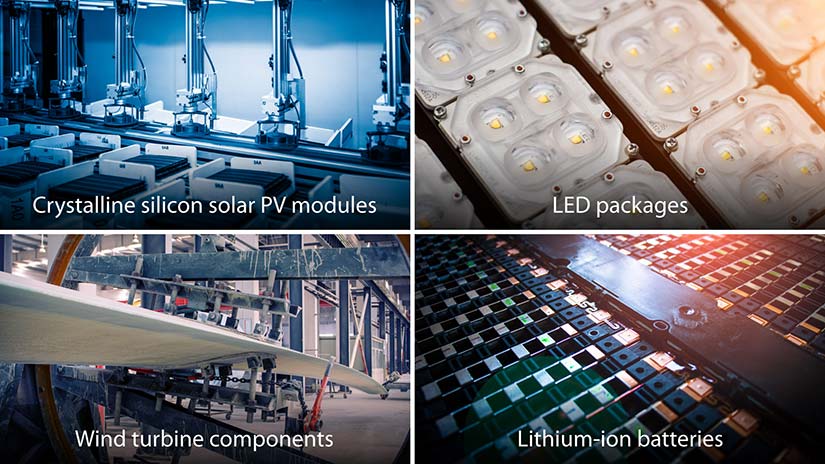 This story was originally published on JISEA.org.

As clean energy manufacturing becomes a greater share of the global economy, manufacturers and decision makers are seeking opportunities in the manufacture, sale, and installation of clean energy technologies.

Gaps between production and demand across the economies and the supply chain were met through an extensive global trade network. From 2014 to 2016, aggregate exports (when measured in U.S. dollars) for the 13 economies declined 7.3% from $39.5 billion to $36.6 billion, while imports declined 9.2% from $51 billion to $46.3 billion. China was the largest exporter of benchmark technologies and the United States was the largest net importer.

The total value added from production of the four benchmark technologies across the 13 economies increased from $89.6 billion in 2014 to $102.4 billion in 2015 and then dropped to $87.3 billion in 2016, in part due to declining unit costs of clean energy technologies. China accrued the largest total value added from manufacturing the four clean energy end products analyzed, amassing three to four times more than each of the following three economies (the United States, Japan, and Germany).

All the analyzed economies accrued indirect value added from the global production of intermediate material, subcomponents, and services related to end product manufacturing of the four technologies in other economies. China was the largest supplier of these intermediates to all the other countries, contributing the most indirect value added to the other benchmarked economies.

Still, the greatest share of total value added to the benchmarked economies over the period generally came from domestic production of the technologies, primarily processing materials, manufacturing components, and providing services throughout the supply chain (indirect value added) rather than assembling the clean energy technology end products themselves (direct value added). 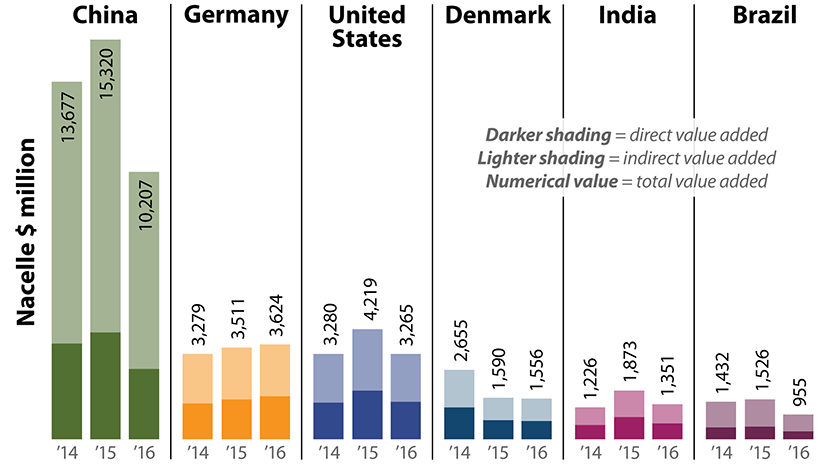 Wind turbine component prices declined from 2014 to 2016—the average installed wind costs decreased by 8% globally and 7% in the United States. Despite the price declines through 2016, wind turbines remained the most capital-intensive of the technology end products evaluated over the period. Economies derived greater value added from manufacturing components than from other clean energy technology intermediates.

Between 2014–2016, wind energy technology demand, production, trade flows, and value added was highest in 2015 with uncertainty around the renewal of the U.S. renewable electricity production tax credit. 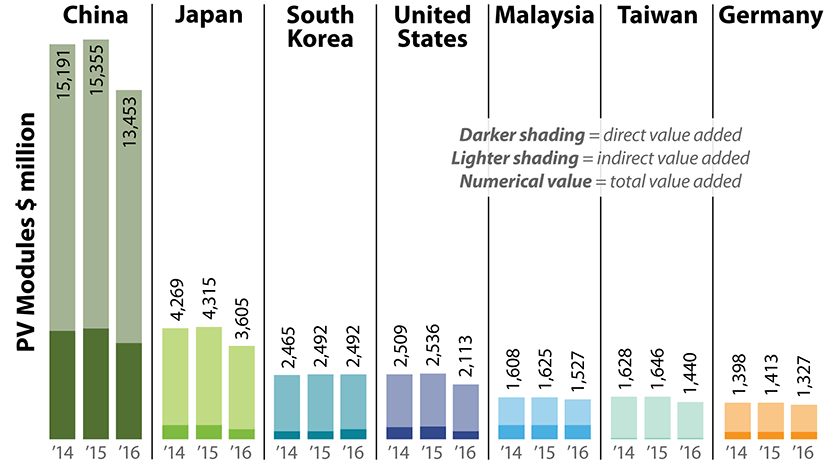 Demand increased for PV modules from 2014 to 2016, driven in part by domestic policies that set targets for renewable deployment or provided incentives to offset costs. Global manufacturing capacity expanded to meet the demand, resulting in excess capacity and contributing to significant declines in prices over the period, including prices for residential- and utility-scale system components.

China maintained its position with the highest demand, production, and manufacturing capacity of the benchmarked economies and contributed indirect value added to the other economies. Policies and equipment contracting approaches like installation targets or tax credits helped stimulate PV Chinese markets.

In the benchmarked economies, the balance of trade (exports minus imports) remained relatively stable across the PV module supply chain, with a few exceptions including PV modules in Japan and the United States, PV cells in China and Taiwan, and polysilicon in Taiwan. Some net importers of end products, such as the United States, were also major exporters of upstream processed materials and/or subcomponents for the same technologies, illustrating the complexity of clean technology manufacturing and trade. 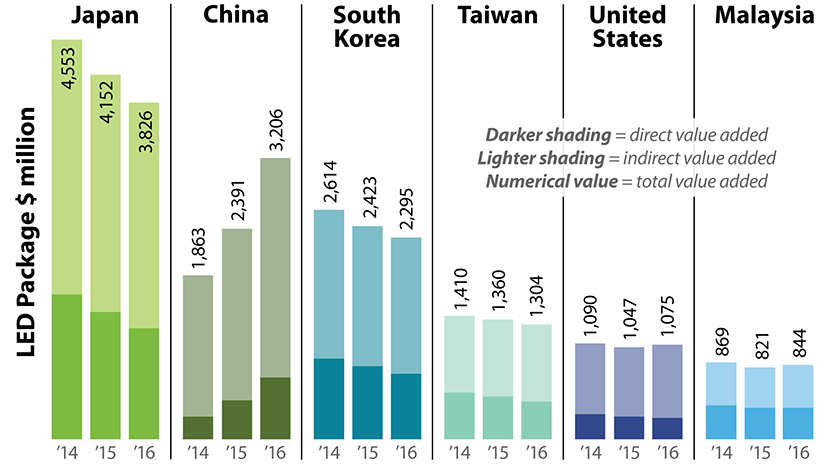 LED packages are used in manufacturing lighting and electronics. Global demand for LED packages, chips, and sapphire substrate grew rapidly between 2014 and 2016, led by China. Demand in other benchmarked economies was relatively flat. Only Taiwan had sufficient domestic production to meet its demand across the supply chain; other economies relied on trade to fill supply chain gaps.

Between 2014 and 2016, annual global production and demand for LED packages increased by 37.8%. The most significant increases were seen in China, where many new foundries came online in 2015. This abruptly reduced imports from Taiwan, contributing to a sharp reduction in China's net imports and Taiwan's net exports from 2015 to 2016. 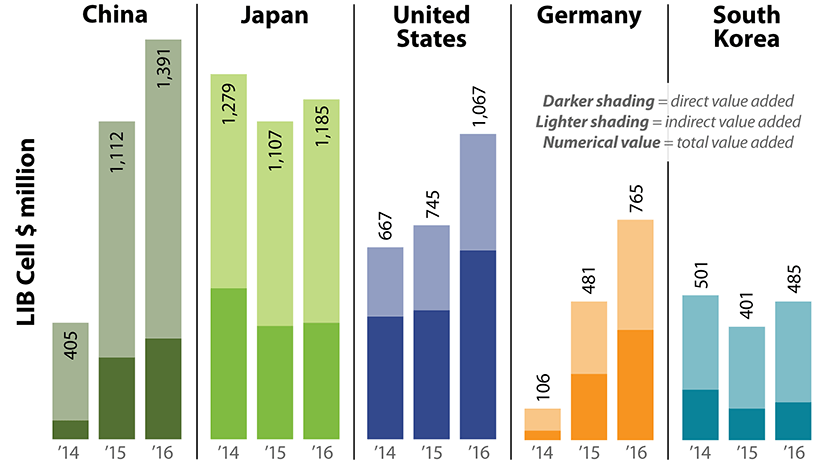 Demand for lithium-ion battery cells grew significantly from 2014 to 2016, driven by investment in electric vehicles (EVs). Global manufacturing capacity soared in 2016 in anticipation of continued investment in EVs, creating excess capacity across the supply chain intermediates.

Learn more about the framework analysis in this report and access additional resources for CEMAC's benchmarks of global clean energy manufacturing, including interactive trade chord charts.