All in a Day’s Work

Dec. 16, 2020 | Contact media relations
Between 2008 and 2018, land-based wind energy deployment in the United States grew at an annual average of 13%, according to the Energy Information Administration (EIA)—and the bulk of that development takes place in rural communities. In fact, about 99% of the entire U.S. fleet of wind turbines calls rural communities home.

Despite these numbers, stakeholders within rural communities—local businesses, residents, and government officials—may not be fully aware of the economic and workforce impacts brought about by both the construction and operation of wind power plants.

At the onset of 2020, NREL examined questions that arise when wind energy comes to a community, highlighting some of the positive socio-economic impacts and perceived challenges. In their new report, “Workforce and Economic Development Considerations from the Operations and Maintenance of Wind Power Plants,” NREL researchers Matthew Kotarbinski, David Keyser, and Jeremy Stefek seek to expand our understanding of wind’s economic impact by examining operation and maintenance (O&M) worker integration in communities.

“Most studies looking at economic impacts resulting from wind development focus on the quantity of workers rather than how these workers live and interact with the community,” Kotarbinski said. “We set out to capture this essential context by looking into worker living and spending habits. By shifting our focus to the operation and maintenance phase of a wind power facility, we can glean valuable insights to enable informed decisions that support long-term workforce planning and new wind energy development.”

It is no secret that strong tailwinds are propelling the wind industry forward.

In 2018, wind energy generated 6.6% of U.S. electricity, the highest among renewables, according to the EIA. With rapid expansion comes opportunity, and projections from the Bureau of Labor Statistics indicate that wind turbine service technician could be one the fastest-growing professions between 2019 and 2029.

According to study authors, the wind industry employed 111,200 workers in 2018. Of these workers, approximately 36,700 were related to construction and 26,500 were related to manufacturing. Though critically important, O&M workers are not organized into their own category of employment.

Recognizing that gap in our understanding, NREL researchers gathered data from wind plant employer and employee-based surveys and data from the EIA, estimating that 8,204 wind workers were employed full-time as operation and maintenance workers nationwide in 2018. That works out to approximately one full-time employee for every seven wind turbines in the United States.

While not as plentiful as their counterparts in construction and manufacturing, O&M workers represent an important piece of the puzzle when considering economic impacts brought to communities by wind energy.

“Even though construction jobs have an impact on communities, their influence is largely constrained to the time it takes to build a wind plant as workers on rotating crews temporarily interact with local businesses,” Stefek said. “By comparison, O&M workers have the potential to live in or near these communities and contribute economic value that extends well beyond the date when a wind power plant goes live.”

Survey results showed that 80% of workers spend money in the community in which they work, and 87% spend most of their money where they live.

"Now imagine that money spent over the course of a wind power plant's life (25 to 40 years)," Stefek said. "You can see the positive economic impact these workers bring."

Several factors influence how many O&M workers live and work in a community, most of which can be tied back to characteristics of the local wind plant.

For example, the geographic characteristics of a region dictate a wind plant’s workforce needs. Wind facilities with higher nameplate capacities—a measure of a wind power plant’s actual production relative to its possible production—tend to have more wind turbines and occur in regions with lower population density and greater land availability. As a result, a larger O&M workforce is needed to provide service to plants with higher rated capacities. 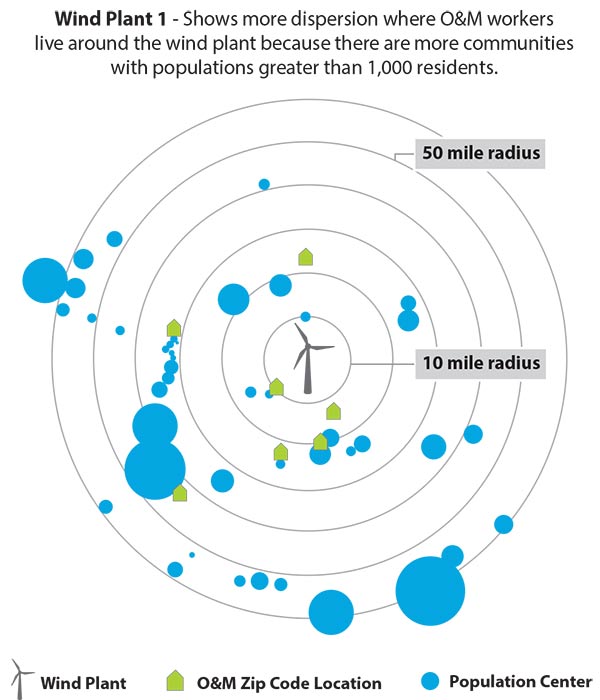 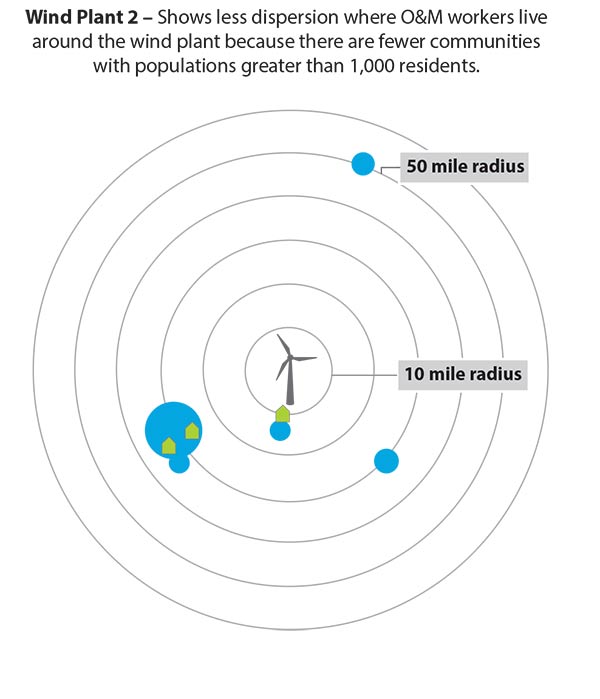 But what about wind power plants that have been in service for a while?

“Wind plants before the year 2000 require an average of 13 more O&M workers than those commissioned after 2000, as improvements to technology have reduced service needs," Kotarbinski said.

Wind power plants and their associated workforce affect the local and surrounding communities in ways both concrete and indirect. These impacts vary from companies’ and workers’ spending at local businesses to the role that these companies and workers play in the quality of life within the communities.

While lingering questions remain, this research sheds light on long-term economic benefits O&M workers provide to the communities where they work and, more often than not, live.