Often one innovation begets another.

Take photovoltaics: the panels' elegant tilt toward the sun leaves a sizable space behind them, especially if they are installed on a flat roof.

That's a lot of space, especially for design engineers whose job it is to pack things in as tightly as possible. What could go there? Why not a battery?

For years, the dream has been to develop a battery system that could withstand the heat, the cold, the rain—the general harsh conditions outside—in order to take advantage of this space.

Most behind-the-meter battery systems—such as those built to save commercial building owners thousands in demand charges—are sensitive creatures. They often need climate control, sometimes their own ventilation system, and most critically, real estate: significant floor space in a busy factory, hospital, or hotel.

Taking those batteries off the floor and fitting them in that unused space behind PV panels is the goal of Yotta Solar, an Austin-based startup that is working with NREL to characterize its prototype battery unit under the auspices of the Wells Fargo Innovation Incubator (IN2) program. 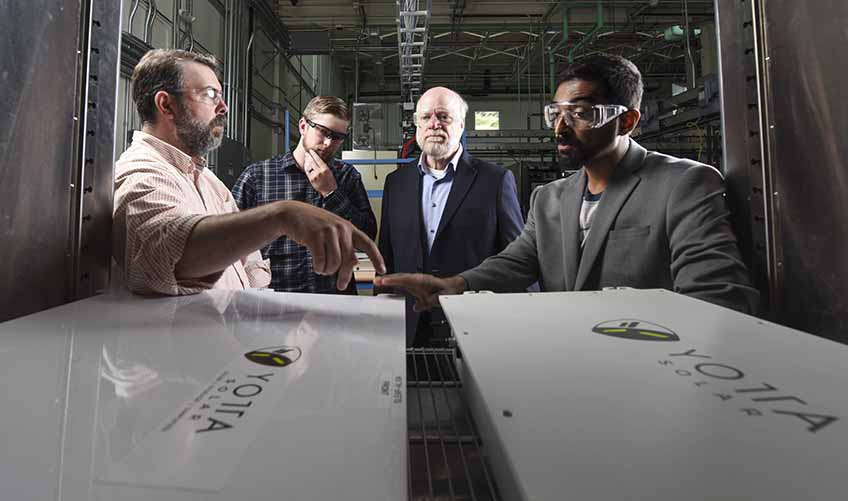 Beating the Heat – And Cold

"The big problem with batteries is temperature, and that's what we've solved with our core technology," says Yotta's president Vikram Iyengar, who brought his company's prototypes to NREL this summer.

The battery unit, named the "SolarLEAF," is a flat white box small enough to fit behind a typical PV panel. In July, the Yotta and NREL teams gathered at the Thermal Test Facility (TTF) to prepare the prototype for a series of experiments that will be conducted in one of NREL's massive environmental chambers.

Over the next several months, the NREL team will use the chamber to characterize the performance of Yotta's unique thermal management system under a variety of conditions, carefully observing how temperatures inside the Yotta unit fare compare to those of a baseline unit nearby.

"NREL's testing data and reports are extremely valuable to early-stage companies and can help steer the next design iterations," says Iyengar.

A phalanx of researchers from across the lab were on hand to lend expertise: principal investigator Tau Kung and Willy Bernal Heredia from the Buildings and Thermal Sciences Center, Aron Saxon and Tom Bethel from the Transportation and Hydrogen Systems Center, and PV researcher Chris Deline from the Materials Science Department.

A battery that plugs into a rooftop panel is the kind of product that can benefit from the broad range of characterization and modeling done at the lab, according to Johney Green, NREL's associate lab director for mechanical and thermal engineering.

"A next-generation battery system is a technology that benefits from a multi-disciplinary approach," says Green. "Between power systems, buildings, battery characterization, and PV research, we can offer that here. And that's unique."

A lot is on the line. Last year, Solar Power World magazine named the SolarLEAF a "Top Product" of 2018, and the possible applications are vast. Behind-the-meter storage deployments in the United States rose 151 percent just last year, according to Wood Mackenzie, and Bloomberg New Energy Finance estimates that globally $620 billion will be spent on battery storage in the next 21 years.

"Some of what we need to characterize is new, and I think you will see this in the IN2 program in general," says Kung. "When you're working with next-generation technologies, sometimes that requires next-generation evaluation techniques."

The IN2 incubator companies include a real grab bag of technologies, from control widgets that go into building sockets, to water analytics systems that detect excess water use.

"We have 30 companies in the program now, and each one has different critical milestones to meet in order to reach commercialization," says Program Manager Trish Cozart. "We spend between 9 and 24 months on each one."

That window of time is often needed. In energy innovation, the path to commercialization is rarely a simple, linear process. For many entrepreneurs, their product, service, or priorities may change radically in the initial stages of development.

"The research priorities were finalized through an iterative process," says Iyengar. "Tau (Kung) has been patient. He gave us a long planning period where we aligned on useful proof points to best leverage NREL's expertise and resources."

Before the IN2 award, Yotta did what startups do before they get to NREL: they wing it, garage-style. They built an earlier prototype partially with off-the-shelf components, built home-made thermal chambers, and stuck the SolarLEAF inside to evaluate the equipment in extreme temperatures.

With the help of funding from local utilities Austin Energy and CPS Energy, Yotta has also conducted initial rooftop demonstrations. "We're in Texas, so we have heat," says Iyengar. But some of the demonstration period turned out to be rainy.

"NREL's thermal chamber will be helpful in getting continuous data in all types of conditions," says Iyengar.

IN2's upcoming round of startup assistance will venture into the intersection of energy and affordable housing. Funding provided by Wells Fargo is up to $250,000 in technical assistance and project support per awardee and is non-dilutive (which means neither Wells Fargo nor NREL own equity in the company).

For Yotta, another upcoming stop is field demonstration with a utility in Australia, where higher electricity prices make storage a more financially beneficial option.

NREL TTF characterization of the SolarLEAF will continue into the fall.