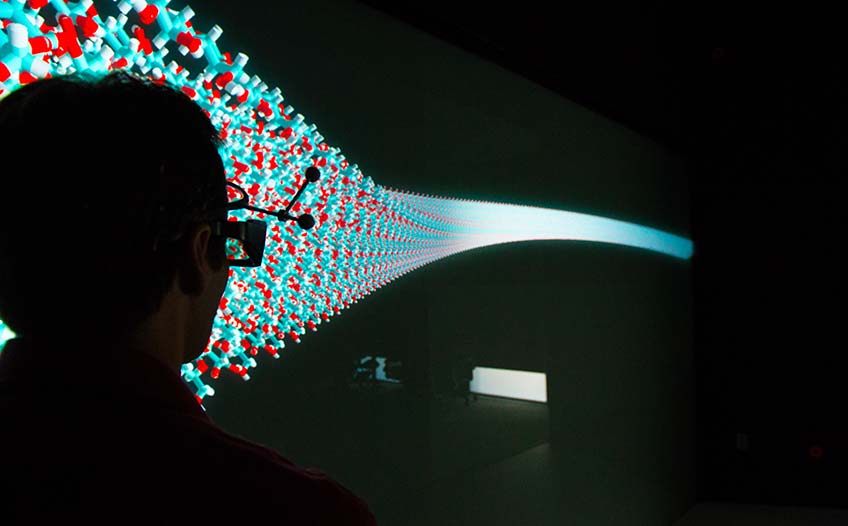 Kenny Gruchalla, the ‘man behind the goggles,' is seen in the visualization cave he designed for NREL's Energy Systems Integration Facility Insight Center. Photo by Dennis Schroeder, NREL 26186

To NRELians, he's known by many names. He's the guy with the 3D goggles. He's the creator of "the cave." He's the silhouette of record. To his peers, he's the visualization guru. But to most, he's simply Kenny—Kenny Gruchalla.

Gruchalla is NREL's senior scientist in scientific visualization. In its simplest form, his work as a key member of NREL's Computational Science Center helps researchers visualize large-scale data and better understand their complex research projects. He spends a great deal of his time in the Energy Systems Integration Facility (ESIF) Insight Center's immersive visualization "cave." A popular tour stop, the cave has seen the likes of many noteworthy visitors, including Energy Department Secretary Rick Perry and President of Iceland Olafur Grimmsson. In NREL's Image Gallery, Gruchalla's likeness—or the edges of it, at least—appears in photographs and video alongside nearly every visiting dignitary to NREL in the past 10 years. 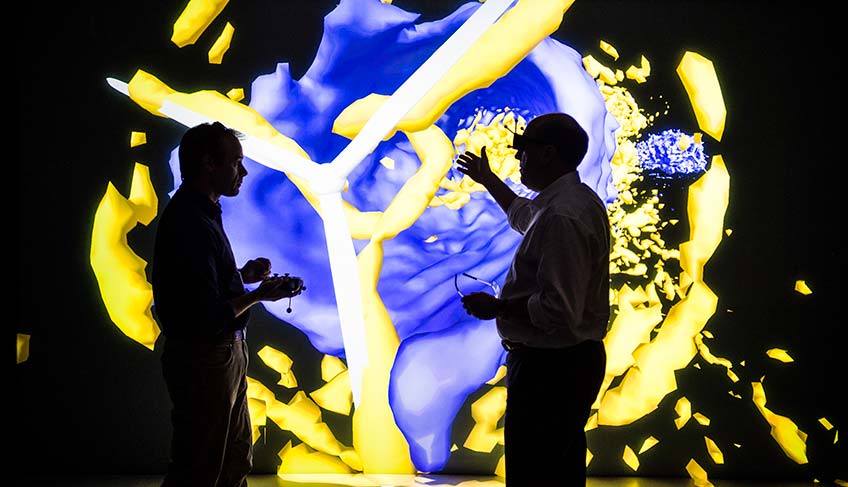 Few people at NREL have so firmly planted themselves at the intersection of success and demand that their first names have taken on new meaning. When asked what "Kenny" means, his coworkers painted a portrait of mentorship, leadership, and standout technical ability.

"He's an extreme expert in our field. His master's thesis is pretty important," said Nicholas Brunhart-Lupo, an NREL scientific visualization research scientist who works with Gruchalla. "He is the key element to the visualization we do here at the lab. Without him, NREL would not have a lot of the projects we have now."

Gruchalla's manager—and that of the larger Data, Analysis, and Visualization group within the lab's Computational Science Center—Kristin Munch recalled the way he was able to design and build the ESIF Insight Center visualization lab for less than $1 million, about half the price of the closest suitable alternative. 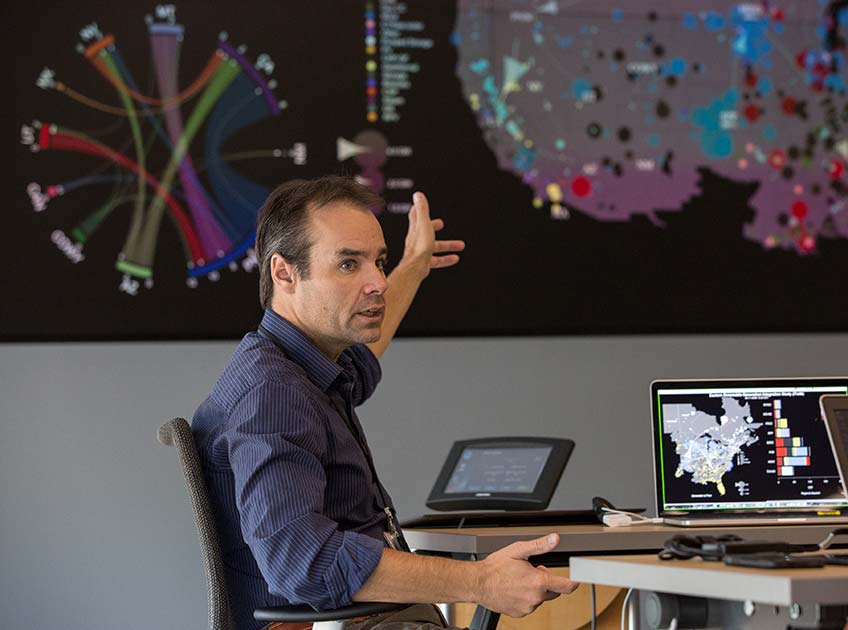 "He had the vision to do it in the first place and the skills to do it on a particular budget," Munch said. "If you went out and bought the Insight Center, it would cost millions of dollars. It's only because he knew exactly how every piece needed to fit and how it went together that we got it in under budget. Kenny was the capability there. It was all him. He was the only one. Our center director knew he could do it."

Part of what Gruchalla said enabled him to build NREL's visualization lab is a strong self-sufficiency skill set he had no choice but to develop while cruising around the Antarctic years ago. Running the data acquisition and visualization laboratory on an National Science Foundation icebreaker named the Nathaniel B. Palmer, he was, at times, the only software developer in a 10,000-mile radius. 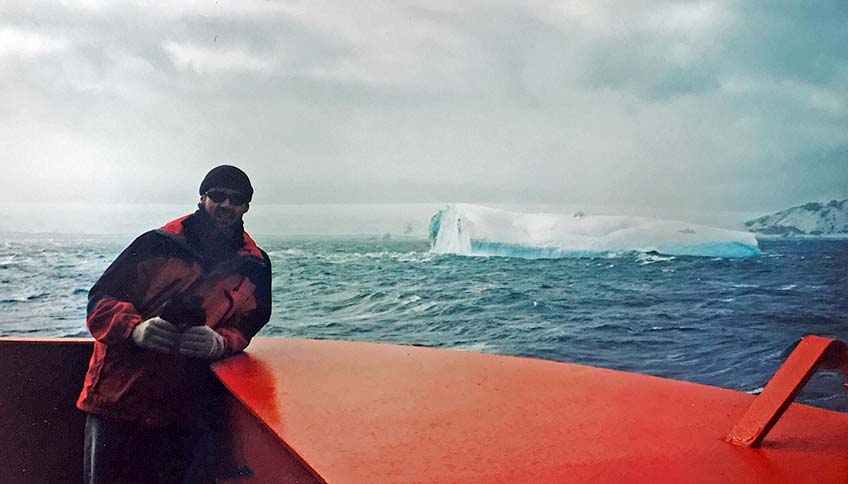 Gruchalla onboard the Nathaniel B. Palmer icebreaker. Image from Kenny Gruchalla

"At that point in time, we had a satellite phone, but there was no Internet connection. I had to take what I needed with me," he said. "If something broke, there was no one to fix it for you. I'd have to run up into the ship's crow's nest to fix a cable or a piece of equipment. I just wanted to go have an adventure. I was literally living an episode of [the PBS show] NOVA—I didn't realize I was laying a foundation."

Gruchalla holds a bachelor's degree in computer science from New Mexico Tech and master's and Ph.D. degrees in computer science from the University of Colorado, Boulder. He went straight into industry after earning his bachelor's because he didn't want to sit around and write proposals all day like his mentor at the time—although he admits he understands the need for it now. He said these days, he tells his NREL Science Undergraduate Laboratory Internship (SULI) interns proposal writing can be fun, and that it has a creative writing component to it. To get them inspired, he asks them to tell a story of what research they would do if someone gave them a million dollars.

After New Mexico Tech, Gruchalla headed to Brookhaven National Laboratory, where he completed an undergraduate internship—the predecessor to today's SULI program. He credits that experience with introducing him to scientific visualization, and giving him something tangible to discuss in job interviews, landing him his first job offer with Hughes Aircraft.

Gruchalla went on to work as a full-time contractor for NASA, where, most notably, he worked on the Mars Odyssey and Genesis spacecraft before becoming the principal investigator for the development of a Mars aircraft flight simulator and a lunar base simulator. He then worked as a part-time contractor for the National Center for Atmospheric Research (NCAR), developing visualization techniques and tools for large-scale turbulence data. 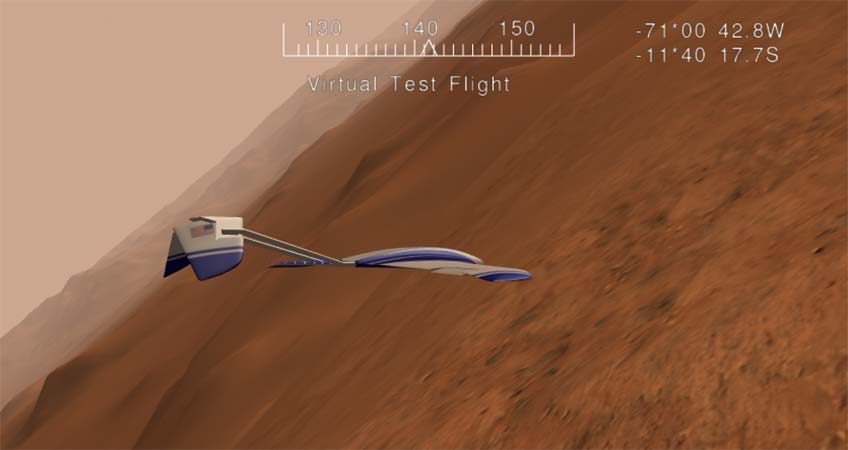 Some of Gruchalla's aircraft flight simulation work for NASA. Image from Kenny Gruchalla

While his expertise in scientific visualization is undeniable, Gruchalla plays a variety of other roles for his NREL teammates, including leader, mentor, and friend. Munch said she hears from people all the time how much they enjoy working with Gruchalla.

"If I get stuck, I feel perfectly open going to him for things. He exudes a calm demeanor, which is very helpful when deadlines approach. He can eliminate panic very quickly," Brunhart-Lupo said.

Brunhart-Lupo had plenty of time to get to know Gruchalla: He started his career at NREL as a student working for Gruchalla. Gruchalla was on Brunhart-Lupo's Ph.D. committee, became his postdoctoral mentor, and now works beside him.

"I have learned so much," Brunhart-Lupo said. "I learned more here than I learned doing my Ph.D. Working with Kenny has been a much more valuable experience."

Mentorship is important to Gruchalla. He said he likes taking on SULI interns because it, in part, makes him feel like he's coming full circle, reminding him of his Brookhaven days. His experience is beneficial to more than just interns, however. Work that used to fall solely to Gruchalla now lands on a three-person scientific visualization team, with colleagues Kristi Potter and Brunhart-Lupo working at his side.

"There are more people now behind the scenes than just myself," he said. "We're trying to grow that base. We're building up more of a visualization capability in terms of people and infrastructure." 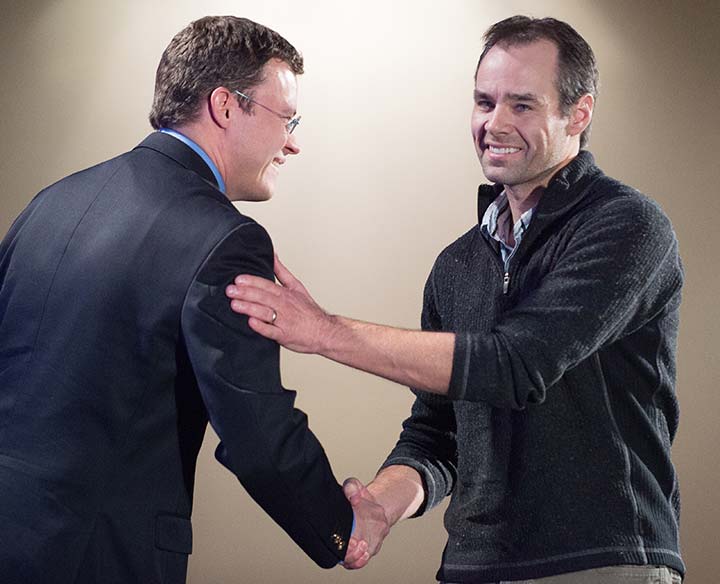 Gruchalla is congratulated by his Computational Science Center colleague Ray Grout as he receives a NREL Staff Award in 2015 for his outstanding service to the lab. Photo by Dennis Schroeder, NREL 32808

As a leader, Gruchalla has done a great deal to empower his colleagues. Much like his center director had faith in him to create the cave itself, Gruchalla turned Brunhart-Lupo loose to write the computer graphics stack for it.

"I'm very grateful. He had confidence in me and let me go forth and do it. It has been the best job I've had," Brunhart-Lupo said.

Kenny has become a staple at NREL and has already solidified a lasting legacy. He continues to honor a commitment to mentorship and leads by example. Through Gruchalla's extraordinary career, his projects have covered the high seas, the blue skies, and even Mars. After all that, he's still happy to call NREL home.