When industry, government laboratories, and universities work together, creative solutions can arise to environmental challenges. The latest example of this originated when NREL partnered with BHP—a global mining, metals, and petroleum company—to research sustainable ways to clean up legacy mining impacts and develop feedstocks for biofuels. 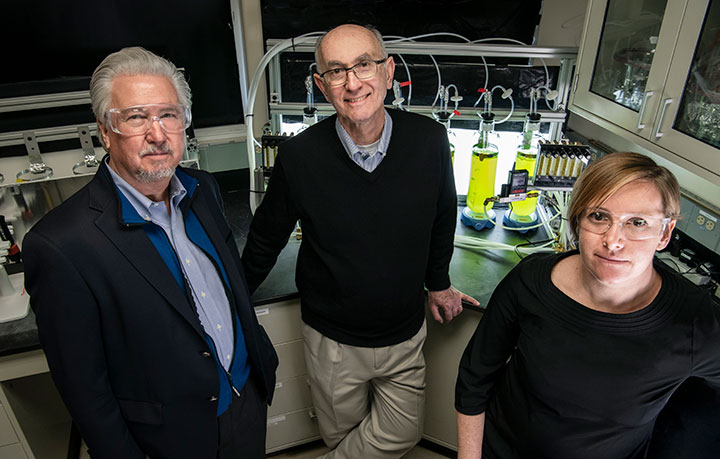 As an owner of many land assets throughout the world, and in line with the company's sustainability goals, BHP sought to understand the feasibility of using closed uranium mine sites in New Mexico as a testbed to grow biomass and produce biofuels while simultaneously remediating soil and water.

BHP put that question out to market in the form of a request for proposals. An NREL team led by principal scientist Robert Baldwin, strategic project lead Phil Pienkos, and senior scientist Lieve Laurens, wrote the winning proposal to study biofuel production and mitigation of radioactive contaminants.

"We are excited to partner with such a forward-thinking organization like BHP," said Baldwin. "Their commitment to environmental responsibility and supporting communities impacted by legacy mining operations aligns well with NREL's mission and values."

Marny Reakes, head of the BHP team which manages the company's reclamation and legacy mine sites in North America, said, "It would be fabulous if this combined 'phytoremediation-biofuels' project developed innovations that could be used to support communities and help remediate legacy uranium mine sites in the Southwest."

The goal of the study is to demonstrate the technical feasibility of simultaneous phytoremediation and biofuel production from the oils produced by arid/halophytic climate plants and algae grown using soils and water containing elevated concentrations of radionuclides and stable heavy metals at legacy sites in New Mexico. The results from the lab and greenhouse studies will provide data to determine the potential for production of biofuels from algae and oil seed-bearing biomass while simultaneously remediating soil and water. 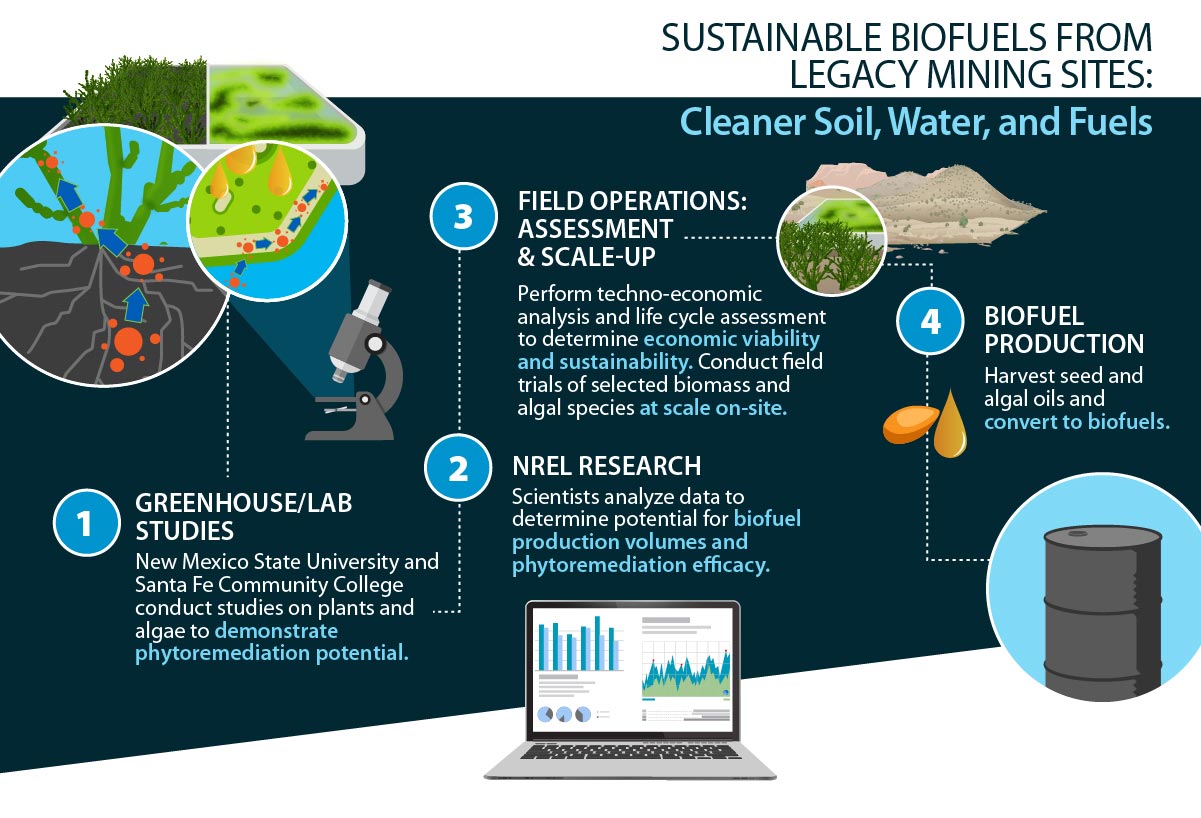 NREL, New Mexico State University, and Santa Fe Community College scientists will apply the principles of phytoremediation and investigate growth of arid-climate plants and algae in the greenhouse and lab using soil and water from a legacy uranium mining site. Small samples of biofuels will be produced to demonstrate overall feasibility. Scientists will scale up the operation and grow plants and algae on site in New Mexico. Plant and algal biomass will be harvested to confirm potential for simultaneous phytoremediation and biofuel production and to provide data for techno-economic analysis and life cycle assessment. Download the PDF

Certain plants and algae will absorb compounds and elements—in this case radionuclides and stable heavy metals—in a process known as phytoremediation, but in this specific instance, it is not yet known where these compounds will settle within the plant and algal biomass. Since the outcome of the study is to produce biofuels from the combined oils generated by the plants and algae, the hope is the radionuclides accumulate in the biomass leftover after lipid extraction—the stems, roots, and leaves of plants and the residual components (largely proteins and carbohydrates) of algae—instead of in the oil-bearing parts.

"What is fascinating about this study is the potential to learn more about where radioactive material ends up in the biomass and if we will be able to produce biofuels that are free from radioactive contaminants," said Pienkos, principal investigator for the project at NREL.

NREL proposed a two-phase study: Phase 1 lasting 24 months and Phase 2 being dependent upon the outcomes of Phase 1. The first phase includes laboratory work to identify and test native and other compatible species of algae and plants for their phytoremediation capability. Researchers will look for safe and efficient ways to process the harvested biomass into biofuels. Phase 2 will be a field trial of the technologies developed during Phase 1.

Universities in the Land of Enchantment to the Rescue

Due to the difficulty of transporting even slightly radioactive material across state lines, NREL proposed that Phase 1 experiments be divided into sub-tasks and completed by two academic institutions in New Mexico. New Mexico State University’s Departments of Plant & Environmental Sciences and Chemical & Materials Engineering (CHME) will manage plant growth greenhouse studies using soil from the Ambrosia Lake site, measurement of radionuclides, and biomass hydrothermal liquefaction and slow pyrolysis for fuels and co-products.

"This project is a perfect opportunity for our engineering students to gain experience with the safe handling of hazardous materials, the development of new analytical capabilities, and cooperation with students and faculty from other disciplines," said Catherine Brewer, project lead and assistant professor in CHME at New Mexico State University. "We often tell our students that significant problems require many eyes and many hands to solve. With this collaboration, we don’t have to tell them; they will be able to see that for themselves."

Phase 1 tasks for the Department of Trades, Advanced Technologies and Sustainability at Santa Fe Community College include isolating and identifying algal species indigenous to the Ambrosia Lake site, studying algal growth and oil production, and measuring algal accumulation of radionuclides and other metals. This work will involve consultants from NeoChloris, Inc. and University of Illinois-Urbana Campus, who are developing a Deep Well Photobioreactor System for potential deployment at Ambrosia Lake for algal cultivation.

"The chance for our students to work on a 'real world' project with a research university and the national labs is a huge motivator for the students in our algae cultivation program," said Stephen Gómez, project lead at Santa Fe Community College. "Our algae technician program trains students to isolate environmental samples and bring them up to industrial photobioreactor scale. Which is exactly what this project does. One of our new algae cultivation students asked me, 'You mean I can get paid to do this?' The excitement level of our students has gone way up."

During Phase 1, NREL will serve as project manager for the study and carry out the following tasks:

If all goes well in Phase 1, then Phase 2 kicks off with teams working outdoors with a scaled-up plant and algae operation on-site in New Mexico.

Learn more about how NREL research impacts the bioeconomy.