Researchers Provide Early Insights into the Potential Market Impacts of the Expansion of Community Choice Aggregations, Including How They Might Drive Demand for Renewables

In their new report, Community Choice Aggregation: Challenges, Opportunities, and Impacts on Renewable Energy Markets, NREL researchers Eric O’Shaughnessy, Jenny Heeter, Jenny Sauer, Emily Chen, and co-authors from the University of California Los Angeles (UCLA) provide early insights into the potential market impacts of the expansion of community choice aggregations (CCAs), including how they might drive demand for renewable electricity.

CCA is an emerging electricity procurement model that allows cities and counties to choose their electricity supply. CCAs can be managed directly by a city or county government or by a third party through a contractual arrangement such as a joint powers agreement. 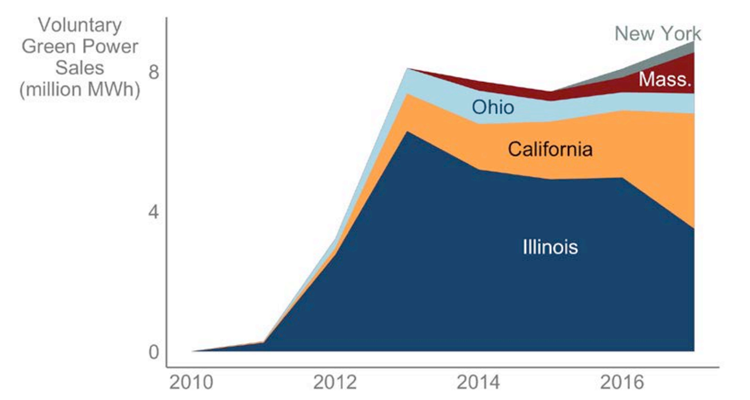 The CCA model is a relatively new concept: the first CCAs began to emerge in the late 1990s and are still only allowed in eight states: California, Illinois, Massachusetts, New Jersey, New York, Ohio, Rhode Island, and Virginia. However, new data compiled by NREL and UCLA show that CCAs are growing rapidly in these states—and could expand to others.

As of 2017, Illinois was the state leader in terms of total CCA sales and CCA renewable energy sales. However, the expansion of CCAs in California in 2018 and early 2019 likely means that the state’s customer and sales counts exceed those in Illinois.

This potential expansion is not without possible challenges and constraints: the study team noted that if CCAs grow, they may pose complications for electric grids and electricity markets—and they also face hurdles that could stymie their expansion. Through a literature review and interviews with 12 CCAs and other stakeholders, the study team identified several key challenges facing CCA expansion, including maintaining cost savings, customer awareness, and regulated market issues.

These potential challenges are not insoluble, but they will require collaboration across a diverse set of stakeholders, including CCAs, utilities, public utility commissions, policymakers, customer advocates, and environmental groups. This analysis is a first attempt to inform the discussion on the responsible and effective integration of CCAs into electricity and voluntary green power markets.

Download the report or related journal article for more information.

This research is supported by the Energy Department's Solar Energy Technologies Office, which supports early-stage research and development to improve the flexibility and performance of solar technologies that contribute to supporting the reliability, resilience, and security of the U.S. electric grid. The office invests in innovative research efforts that securely integrate more solar energy into the grid, enhance the use and storage of solar energy, and lower solar electricity costs. Learn more.