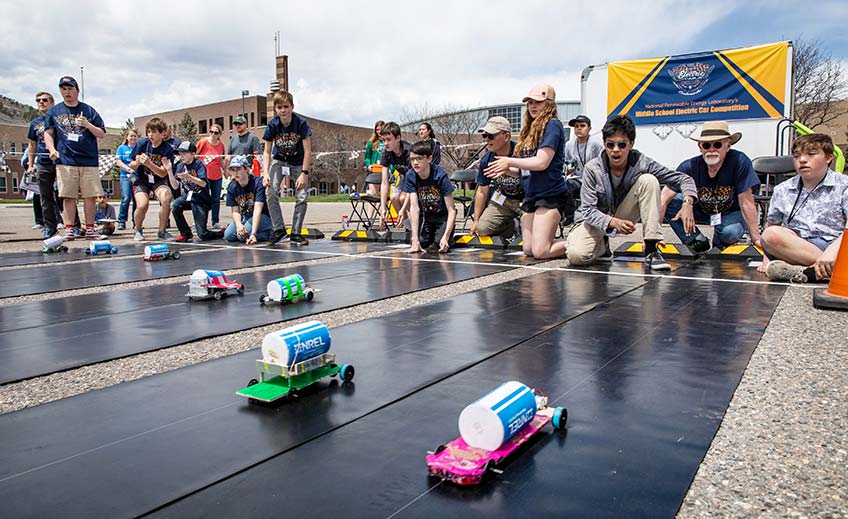 Middle school students eagerly arrived at Dakota Ridge High School in Littleton, Colorado, on May 4 with their game faces on, snacks in their pockets, and model electric cars in their hands. The day had finally come for these students to put their science, technology, engineering, and math (STEM) knowledge to the test and race their solar- or battery-powered model cars at NREL’s 29th Middle School Electric Car Competition.

The NREL competition provides middle school students with a hands-on opportunity designed to encourage their interest in STEM. Students–with the guidance from their teachers and coaches–set out to construct a car powered by either a solar panel or a lithium-ion battery to race against other middle schoolers across Colorado. The cars are judged on speed and design.

“The competition is an incredible experience that teaches students how you can use technology to help change the world,” said Welby Nalls, a science teacher at Parker Performing Arts School and a longtime coach for the car competition. “The competition is my favorite thing we do in my technology class. NREL puts on such a great program, and the kids are always excited to come.”

For the competition, 232 students from 19 middle schools created 82 cars, with some teams creating multiple solar- or battery-powered vehicles. Before the cars could hit the race track, NREL volunteers judged the design of the cars and inspected the vehicles to ensure they met the competition requirements. Once judged on design and inspected, the cars raced through a series of time trials down a 20-meter neoprene rubber track. The 16 fastest cars in the solar and battery categories moved on to the afternoon double-elimination rounds.

A crowd of proud parents, siblings, teachers, and even a few dogs cheered for their respective teams as cars whizzed down the track, which was decorated with checkered flags. Between races, students put their safety glasses on and refined their designs using hot-glue guns and soldering irons. “We caused a few battery short circuits along the way and maybe fried some wires when we were constructing the car at school,” said sixth-grader Bridger Yett of Webber Middle School, who later humorously referred to his team’s car as the “Coolest Deathtrap on Wheels.” His team remained determined and could be seen making modifications to their car before the next race. “Even when things explode, you can fix them,” continued Bridger.

Sure enough, the once-troublesome “Coolest Deathtrap on Wheels” made it to the final round of the battery-powered car competition, coming in third. In the end, in the awards for speed the Manning School of Academics & Arts dominated winning both the solar- and battery-powered competitions. For design, Parker Performing Arts won first place in the batter category and Mead Middle School captured first prize in the solar category. In recognition of their sportsmanship, Webber Middle School’s Nitro Kitty team won this year’s Spirit Award for its raucous and supportive cheering section. 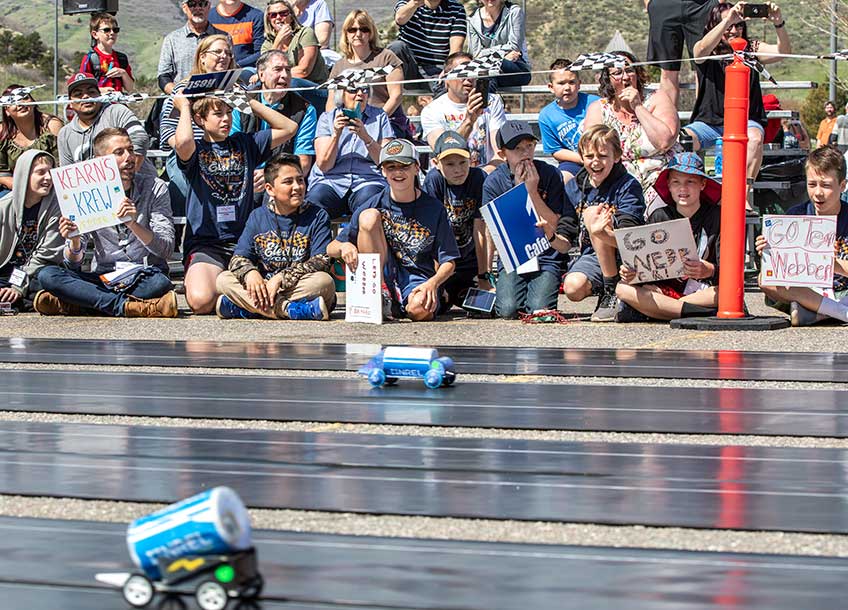 The crowd cheers as electric cars whiz down the race track at the NREL Middle School Car Competitions. Photo by Vern Slocum, NREL

“Each student is able to come away learning something whether it’s the importance of trial and error, electrical circuits, physics of speed, or facets of renewable energy,” said Greg Over from Fort Collins Utilities, who helped coach students for this year’s competition. Regardless of who received a trophy, participation in the competition brings opportunities for every student to continue to pursue a future in STEM. 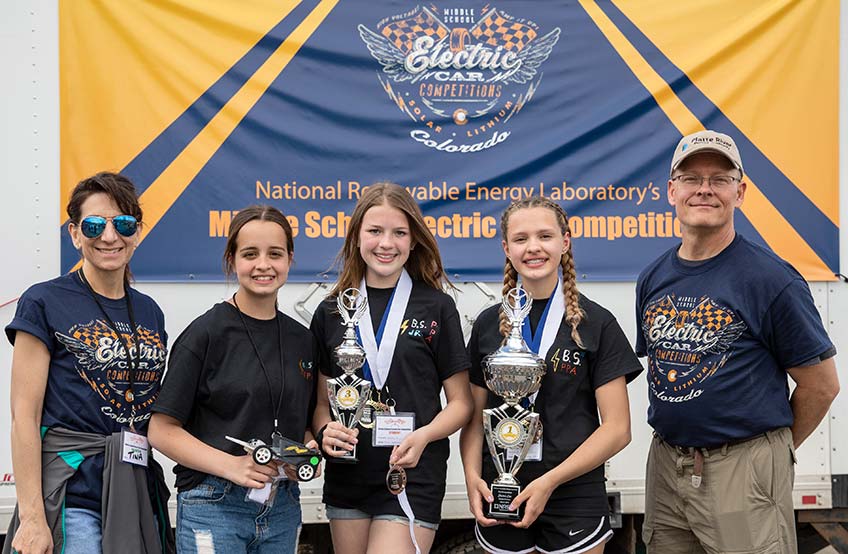 Supporting the Next Generation of STEM Together

Over the course of the day, students were supported by a team of volunteers, many from NREL, who helped with registration, scorekeeping, judging, announcing, and much more. “There are so many ways students can excel in this competition, and so being able to see them succeed is really rewarding.” said NREL volunteer Jim Ball. “The design aspect allows for such creativity, the technical component is an awesome place to further step into STEM, and the team-building part of the program is such an important social experience for many of these students.”

To help further support the next generation of STEM professionals, NREL partnered with the Verizon Foundation as well as the Platte River Power Authority for the competition. “The Verizon Foundation is committed to finding new ways to engage all students in STEM by providing free technology, free access, and innovative curricula to build a brighter future for millions of kids,” said Verizon’s Shannon Jenness.

NREL’s partnership presence additionally allowed students to see the support they have from their Colorado community while gaining exposure to today’s growing energy landscape. “We’re excited to sponsor this year’s event because it not only aligns well with the direction that we are going in solar and battery power,” said Steve Roalstad, spokesman for Platte River Power Authority, “but also because the utility industry’s workforce is in the middle of a generational shift. The kids who compete in the solar and battery car challenge today may well become the engineers and technical experts we will all need in the future.” 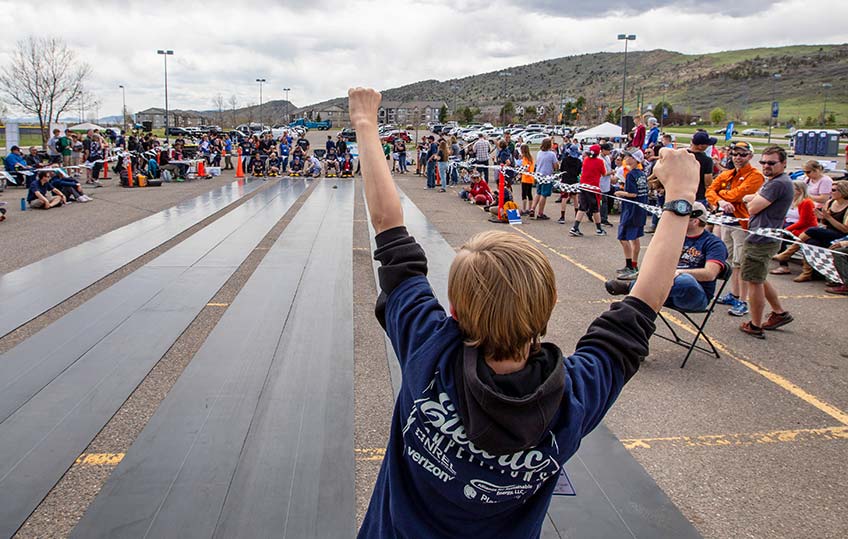 The event was one example of NREL’s many efforts to inspire, engage, and support students who will become the STEM workforce of the future. “The competition represents NREL’s steadfast commitment to transforming energy through community engagement in STEM education,” said NREL Community Relations Lead Jill Rhodes.

NREL engages students, teachers, and community members in the STEM conversation through a multitude of educational programs. Visit NREL's Energy Education website to learn more about the ways the laboratory inspires students to explore solutions for future energy needs.