Benefits of Agrivoltaics Across the Food-Energy-Water Nexus 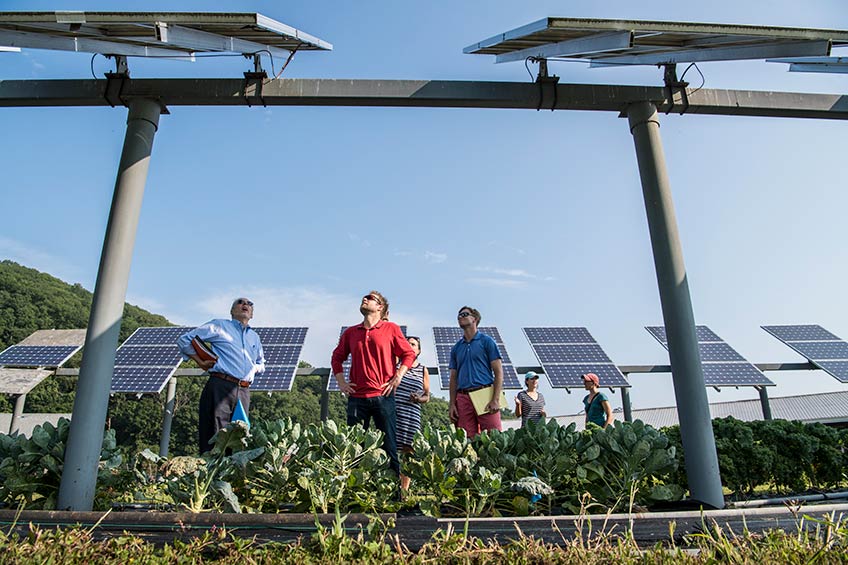 Food and energy security need not be competing objectives. In fact, taking a holistic, integrated approach to food-energy-water decision making can increase resiliency of both food and energy systems.

Across the globe, reductions in precipitation and rising air temperatures are increasing vulnerabilities in both the agricultural and energy sectors. Water scarcity concerns are shaping conversations and driving action in the agricultural sector while extreme weather events are impacting energy systems worldwide, reducing the reliability of energy generation. As such, the resilience of the global energy system is of growing importance. Drought-proof technologies such as wind and solar photovoltaics can satisfy both resilience and sustainability concerns.

However, studies of ground-mounted PV installations with gravel groundcover have found increased temperatures surrounding solar arrays, creating a “heat island” effect. This is particularly problematic due to PV panel sensitivities to temperature increases and resulting consequences for performance.

The business-as-usual approach to PV installations is to employ gravel as ground cover. Swapping the gravel for vegetation via strategic planting can help counter the heat feedback loop.

Applying a model derived from low-impact urban design, researchers looked to the concept of “novel ecosystems,” and how they might benefit renewable energy and food production systems in dryland ecosystems. Researchers considered the possibility of co-located agriculture and solar PV infrastructure to maximize crop yields, minimize water use, and produce resilient, renewable energy.

During the three-month growing season, they monitored light levels, air temperature, and relative humidity using sensors mounted above the soil surface. They also measured soil temperature and moisture at a depth of 5 centimeters. Both the control and agrivoltaic systems received the same irrigation in two testing scenarios: daily irrigation and irrigation every two days.

Implications for the Food-Energy-Water Nexus

While impacts varied by plant type, the researchers found that the agrivoltaic systems held promising implications for food production, water savings, and renewable energy production. The reduction in direct sunlight exposure beneath the PV panels led to cooler air temperatures during the day and warmer temperatures at night, which allowed the plants under the solar arrays to retain more moisture than the control crops that grew in open-sky planting areas.

Results from in the study include:

The co-location of PV and agriculture could offer win-win outcomes across many sectors, increasing crop production, reducing water loss, and improving the efficiency of PV arrays. Adopting such synergistic paths forward can help build resilient food-production and energy-generation systems.

As Macknick notes, “The promising results of this work have broad implications for how solar development and farming across the globe could be integrated to provide mutual benefits.”