What does it take to persuade people who are considering the purchase of an electric vehicle to actually buy one?

That burning question spurred analysts from the U.S. Department of Energy's (DOE's) National Renewable Energy Laboratory and Tufts University to conduct an in-depth analysis to find out. 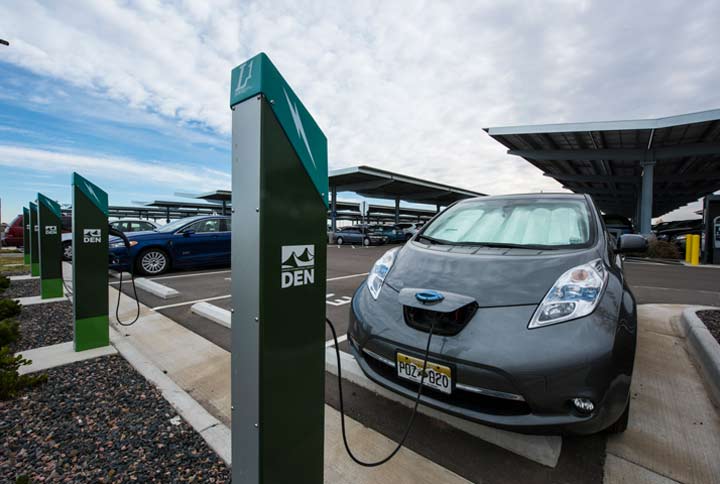 The Pena Station Parking Facility uses photovoltaics to produce energy for lighting, controls, and electric vehicle charging stations. The rooftop solar also provides shading and protection from the elements. Commuters can park at the facility and ride the train to Denver International Airport. Photo by Dennis Schroeder

The results of that study, titled "The role of demand-side incentives and charging infrastructure on plug-in electric vehicle adoption: analysis of U.S. States," were recently published in Environmental Research Letters and provide insight on U.S. state and local incentives that are most likely to increase plug-in electric vehicle (PEV) adoption. The basis of the study focuses on three central questions:

"An increase in zero- or low-emitting PEVs is one way to mitigate air pollution and our research delivers data-driven guidance to state and local decision-makers on incentives that positively impact PEV adoption rates." said Caley Johnson, senior transportation market analyst at NREL and co-author of the study.

Researchers found the most influential incentive for increasing adoption (by 8.5%) proved to be allowing PEV drivers to utilize HOV lanes without a passenger. The second-largest incentive influencing adoption was a $1,000 rebate at the time of purchase, which contributed to a 4.8% increase in PEV purchases.

"$1,000 in rebates is more than twice as effective as the same amount given via tax credits," Johnson said. "This finding is in line with studies that have pointed out that incentives closer to the point of sale are more compelling to consumers."

Charging station accessibility was also found to increase PEV adoption by 3.1% for each additional station per hundred thousand people of driving age.

Incentives and demographic factors that did not have a significant impact on PEV adoption include electrical vehicle supply equipment installation credits, home charging rate discounts offered by local utilities, and vehicle miles traveled per capita.

Overall, data from the study show that financial incentives and public charging infrastructure are dominant factors in driving PEV adoption in the United States.

"Early investments in infrastructure, even if they remain underutilized for some time, are likely to incentivize early adopters and result in a multiplying effect on PEV adoption," Johnson said.