NREL scientists have a long history of successfully analyzing geothermal and solar energy data. But they are now actively researching desalination capabilities by partnering with technology leaders on several groundbreaking projects. The purpose is to explore geothermal and solar-thermal technologies for creating fresh water from otherwise unusable water.

The ability to desalinate otherwise nonpotable water is a vitally important process, but its cost can be high. Fortunately, there is potential to tap otherwise unused renewable heat to drastically reduce the cost of thermal desalination. Applied in the right locations, thermal desalination could mean economic viability for water treatment.

"Water scarcity is a growing problem throughout the world. The ability to apply renewable energy solutions is key to a sustainable water future," said Craig Turchi, principal engineer within the Thermal Sciences Group at NREL.

Using Heat from the Earth

The "Desalination of Impaired Water Using Geothermal Energy" project is paramount in the geothermal approach to desalination. And taking the lead in this project is Turchi, assisted by researchers at the Colorado School of Mines, University of California Los Angeles (UCLA), and Ormat Technologies. The goal is to apply underused, low-temperature geothermal resources to the desalination process.

Thermal desalination technologies use more energy and are generally costlier than reverse-osmosis desalination. However, the thermal desalination methods, such as membrane distillation (MD), use mostly thermal, not electrical energy. So, to overcome this energy and cost challenge, the project is using untapped or residual heat in geothermal resources for the MD heat source. Along with this approach, the project is also researching coatings designed to protect and improve membrane distillation.

Although NREL has effectively wrapped up its role in the project, work continues at UCLA with David Jassby and his team. More research must still be successfully accomplished by the scientific community before geothermal desalination is cost-effective. However, advances have been made in producing high-quality water from geothermal brines at lower cost than traditional thermal distillation, and membrane coatings have been shown to provide the ability to minimize and remove undesired scale formation. 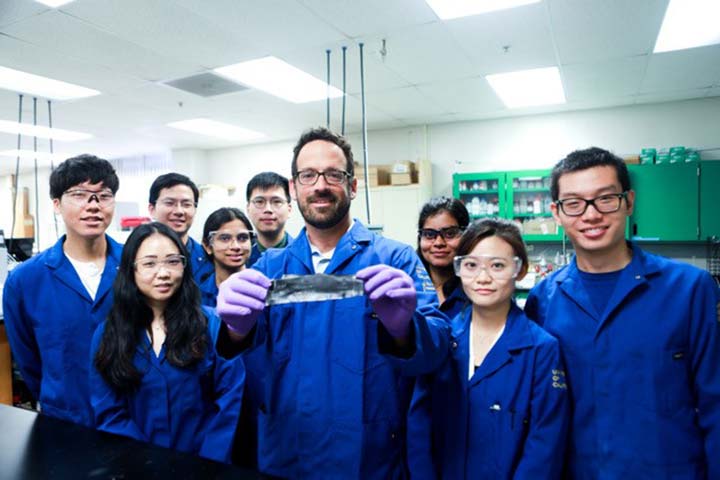 And Heat from the Sun

Started in October 2018, the "Solar Steam on Demand" project is led by Sunvapor, Inc., with the goal of determining the feasibility of delivering heat to an industrial steam-consuming process at a levelized cost of heat of 1.5¢/kWh. NREL will be designing a latent-heat thermal storage system that integrates with Sunvapor's low-cost solar collector.

Project steps include lab-scale testing for a latent-heat energy storage (LHES) system, testing the capacity of the solar-steam prototype to deliver steam to a process, and building and factory-testing the LHES module.

The "Energy Where It Matters: Delivering Heat to the Membrane/Water Interface for Enhanced Thermal Desalination" project is led by UCLA's Jassby. The project will focus on a techno-economic analysis of UCLA's innovative membrane-distillation concept and essentially continues where the NREL-led geothermal desalination project left off.

The goal is to develop a transformative, thermally driven MD desalination technology that allows heat to be delivered directly to the membrane/water interface. By this approach, heat management in the MD system can be significantly simplified while water recovery is decoupled from hydraulic conditions.

"SkyTrough Vacuum Membrane: An Extreme Low-Cost Solar-Thermal Collector for Desalination" is a new project being led by SkyFuel, Inc., with assistance from NREL. The goal is to reduce the levelized cost of heat from solar-thermal energy by developing a membrane-based, lightweight parabolic trough solar collector. The idea is that the new solar collector will reduce capital and integration costs.

In addition to designing the solar collector, SkyFuel will design an associated delivery system for heat-transfer fluid as well as a low-temperature thermal energy storage system to be integrated with the innovative solar collector.

Additional information is available on the CSP website or by contacting Principal Engineer Craig Turchi.