Access to Data Accelerates Innovation and Adoption of Geothermal Technologies 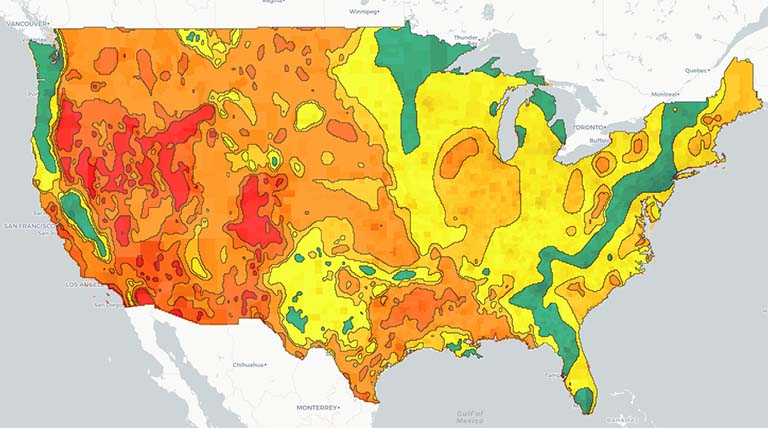 The future of research and development in the geothermal sector is being driven by data-informed decisions and research built upon the quantifiable outcomes of previous endeavors.  The U.S. Department of Energy (DOE) has adopted a strategy of measuring success “not when a project is completed, or an experiment concluded, but when scientific and technical information is disseminated.” The timely dissemination of critical information is what allows future research projects to build upon previous lessons learned, reduce duplication of efforts, and combine findings into new innovative research projects.

Over the past few years, NREL’s geothermal team has developed several tools and platforms to streamline the collection and sharing of geothermal data sets, enabling new breakthroughs in geothermal research and development.

NREL's Geothermal Data Repository connects and shares data with a broad network of data-sharing platforms, ensuring users can find the data they need.

Collecting and organizing all the data produced by projects funded by the DOE Geothermal Technologies Office, the Geothermal Data Repository (GDR) hosts more than 700 datasets (and growing). From 3D models and simulation data to deep-direct-use data, code for analyzing datasets, and raw instrument data, the GDR offers up more than 500 gigabytes of publicly available data. These data are disseminated through a network of data-sharing partners designed to provide maximum impact and make the data as accessible as possible to the greater geothermal scientific community. They have been used by industry, universities, and other national labs in research projects, by other governmental organizations to inform policy, and by financial institutions in siting new geothermal resource development opportunities.

“We’re trying to advance the adoption and innovation of geothermal technologies by making other people’s research more available, accessible, and useful,” said Jon Weers, an NREL data scientist and web engineer who led the development of the GDR. Before joining NREL, Weers helped the Chicago Public Library develop a data system to share and manage book inventory across its many branches. In a sense, the GDR plays a similar role, broadcasting its data to other public data networks, including the National Geothermal Data System (NGDS), and making it simple for users to quickly find the information they need.

With the growing body of publicly available geothermal data, NREL’s geothermal team has also been developing a tool to visualize and explore geothermal data. Geothermal Prospector was originally created by NREL to bring together geospatial data sets that were spread across universities and government agencies.

“We have a broad scope of geothermal data layers in the tool—such as maps of county heat demand, low-temperature geothermal, estimated temperatures at depths, and USGS data—that inform where new geothermal development might be favorable,” said Nick Gilroy, a geospatial data scientist on the NREL Geospatial Data Science team who oversees Geothermal Prospector. “But it also can pull in datasets from the NGDS, allowing diverse research sets to be viewed simultaneously.”

The well summary tool in Geothermal Prospector can quickly display important information about geothermal wells drilled in any user-selected area, making it easy to quickly review existing geothermal production in an area.

Geothermal Prospector marries this rich library of datasets to analytical screening tools, such as the well summary tool, allowing users to visualize the available data to target future exploration and research. The conversion of paper data sets from disparate locations into digitally available data and screening tools has been transformative to an industry that relies on these information for resource targeting.

Today, Gilroy and his colleagues are working to automatically integrate data sets from the GDR into Geothermal Prospector, while adding a 3D mode to visualize more complex data. Their goal is to provide an easy method for users of the GDR to visualize and analyze a dataset before they download it and to make it easier to share and analyze geospatial data sets without relying on proprietary software formats.

“One of the neat things about the GDR and Geothermal Prospector is that the structures are so portable and re-usable,” said Weers. Access to data is often a roadblock to geothermal development—particularly outside of the United States. The development of data systems like the GDR and Geothermal Prospector not only helps to overcome these barriers in the U.S. but can serve as a model for setting up geothermal data repositories in other parts of the world.

“These data often exist only in paper form in many countries, making access to data time and resource-intensive, occasionally requiring travel, assuming you even know where to look,” said Kate Young, the Geothermal Laboratory Program Manager at NREL. “Governments can help to encourage geothermal development by making these data available electronically in their countries, leveraging existing resources like the GDR and Geothermal Prospector as a foundation.” By taking advantage of these already developed geothermal data models and structures, new geothermal development efforts can reduce their costs.

And these data tools are just the start. Big data, the internet of things, and cloud computing are the new game changers in the oil and gas industry. NREL is working to bring these same data innovations to the geothermal industry. With NREL’s current supercomputer powerhouse, Peregrine, being replaced this year with an even more powerful supercomputer being dubbed “Eagle,” NREL will have one of the 30 fastest computers in the world. This, combined with NREL’s big data and machine learning capabilities, puts NREL in a position to become a world leader in this area. “NREL’s focus has been in using supercomputers to advance renewable energy through massive simulations of systems like wind energy plants and the electric grid. Now, we are adding machine learning techniques to help make sense of the massive datasets we get, both from field data and advanced simulation," said Steve Hammond, the director of NREL’s Computational Science Center.

The NREL geothermal team is applying these same data and visualization capabilities to advance how the geothermal industry uses data to improve exploration and resource targeting, drilling faster and less expensive wells, and better managing reservoirs. “The sheer volume of data collected in evaluating the 3D subsurface makes geothermal the perfect application of big data and machine learning solutions. In today’s competitive energy markets, where every cost-saving opportunity is crucial for competitiveness, big data and machine learning could enable improved, real-time decision making that could save the geothermal industry millions,” said Young. “This technology could unlock cost reductions that will spur a new generation of geothermal development.”