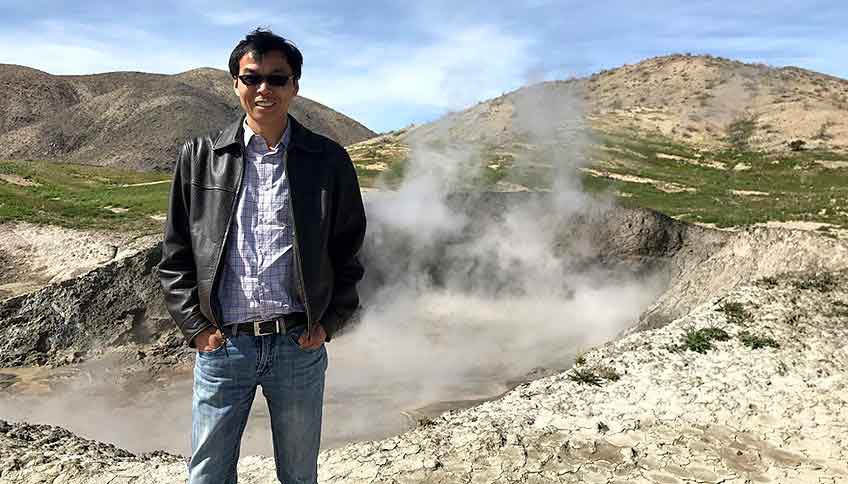 Guangdong Zhu's career has involved modeling work with a variety of high-temperature fluids, including geothermal resources.

As a youth growing up in China, Guangdong Zhu—or GD, for short—often had electric power on his mind, perhaps because it wasn’t always a reliable commodity. As he grew older, he considered that his interest in math, science, and technology might be applied to the power grid. And in college, he gravitated toward thermal engineering, influenced in part by an older friend who worked as an engineer at a local coal-fired power plant.

Guangdong’s bachelor’s degree from Northeast China Institute of Electric Power Engineering was followed by a master’s degree in thermal engineering from Xi'an Jiaotong University. Wanting to pursue more varied research topics at a high level, he applied to various U.S. universities, settling on a doctorate program in mechanical engineering at the University of New Mexico (UNM), where he received a full scholarship. In his dissertation research, GD modeled flow within rock formations, with the goal of helping sequester carbon dioxide from power plants by pumping supercritical CO2 into saline aquifers.

A Shift in Focus

After several more years of postdoctoral work—at the University of Pittsburgh and back at UNM—pursuing fluid-flow modeling, GD found himself at a professional crossroads. He had been spending much of his time solving the difficult differential Navier-Stokes equations, which describe the flow of viscous fluids. “This was fun, but I was only making modifications to numerical models. I’d make changes or improvements here and there, but wouldn’t see their impact in reality for a long, long time,” he explains. Instead, he yearned to work in an area with more immediate societal impact. “I wanted to prove that what I had learned in school was actually useful to society. I wanted to see it make an impact!” he says.

Guangdong found the impact he was seeking through solar thermal collector panels on the Mechanical Engineering Department’s roof at UNM. This led to focusing on concentrating solar power (CSP) as a perfect combination of his background in power plants, thermodynamics, fluid mechanics, and heat transfer. “I was able to combine all my interests into this one intriguing application—CSP,” GD says.

Three years of work with an Albuquerque CSP startup, SkyFuel, allowed GD to add another key area of expertise for CSP work—optics—to his scientific toolkit. It was also at SkyFuel that GD began to collaborate with scientists from NREL. In particular, he found his working relationship with NREL’s Tim Wendelin to be incredibly valuable. “Tim was so knowledgeable, supportive, and patient. I decided, ‘That’s the type of researcher I want to be!’”

In part because of his collaboration with Wendelin, Guangdong applied to NREL and began his tenure in December 2010. Starting with optical-efficiency testing for parabolic trough collectors, GD worked in several areas of CSP research, including optical and thermal modeling and economic analysis of solar concentrating systems.

Although GD had never worked directly with geothermal concepts, his background in fluid modeling inspired him to begin looking at opportunities to bring together geothermal and CSP technologies.

GD points to multiple recent projects as proof that hybridization works in the field. In Stillwater, Nevada, a CSP solar field is installed with the geothermal plant. Turchi and GD used a modeling tool to assess the hybrid plant’s performance and develop a strategy for best operations by working with engineers from the plant and researchers from Idaho National Laboratory.

Another project is at Coso, California, where 30 years of operational data have documented declining performance. NREL has been designing the best hybridization scenario to boost power performance and have found that geothermal-plus-CSP with thermal energy storage is more economic than using photovoltaics-plus-batteries.

An ongoing project at Raft River, Idaho, is determining the feasibility of a new configuration for solar and geothermal—using a solar “topping” cycle for high-temperature CSP, with the exhaust steam feeding into a geothermal “bottoming” cycle.

As a natural extension, another project considers designing a hybrid plant right from the beginning—as a ‘greenfield’ project—to fully explore the potential of two complementary renewable technologies.

“To do so, we need to deal with mismatch of the resource—solar is intermittent, geothermal is consistent night and day,” says GD. “But thermal energy storage stores higher-temperature solar heat, so hybridization can provide more efficient dispatchability, allowing geothermal to be more competitive in the future grid.” 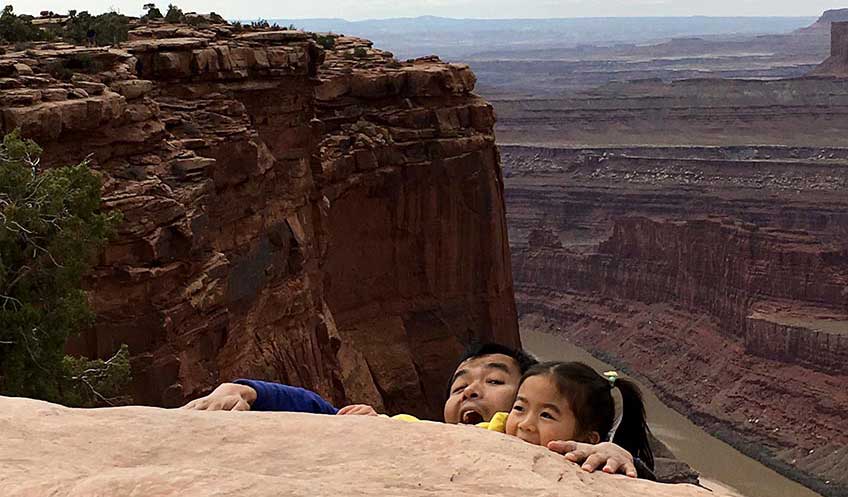 Guangdong's work has inspired his daughter, pictured here on a family vacation in Utah, to consider a career in engineering.

Clean Energy for the Future

What does GD want others beyond NREL to know about him? “I’m working on clean energy. And clean energy is the future!” he says. And GD has more than an academic interest in the future of clean energy; he and his wife are raising a son and daughter.

His 8-year-old daughter, after visiting NREL for Take-Your-Child-to-Work day, wrote in her school journal that she wants to be an engineer. “I’m proud that she’s inspired by what I and others do at NREL,” says GD. On the other hand, his 11-year-old son, who shares GD’s love for soccer, wants to be a professional soccer player. But if that gig doesn’t pan out, he concedes that he might want to be an engineer, too.