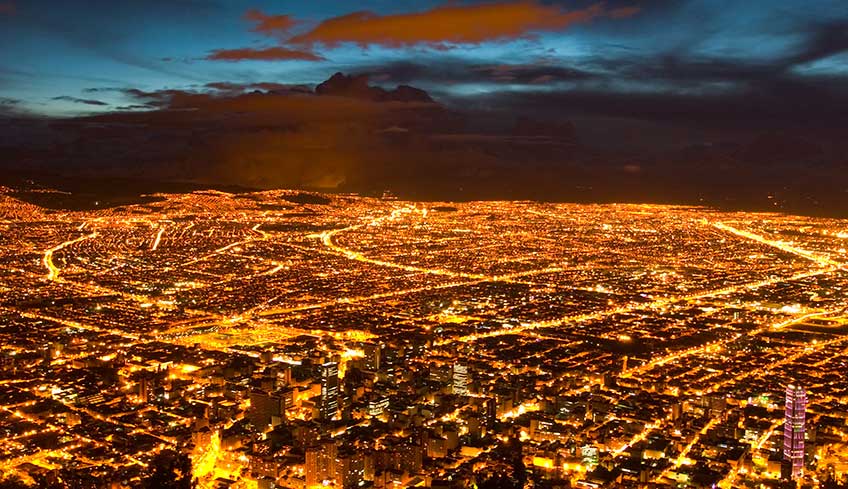 NREL and USAID are helping the Colombian government prepare for its first renewable energy auction. Wind, bio, and solar energy will support the country's hydro-dominant energy sector in drought years. Image by iStock 483478857.

Diversifying its energy mix to include more solar and wind is a priority for Colombia. Because the country depends on hydroelectricity for nearly 70% of its energy, dry years are especially harsh. For example, the El Niño-induced droughts of 2016 forced Colombians to ration their energy during peak hours. Further, coal and gas plants are paid a premium to operate during non-drought years to support the grid when hydro energy cannot.

The country believes renewable energy auctions might be a solution that strengthens the energy system with an eye toward international investment. Following the 2017 decision to host an auction, the Government of Colombia's Ministry of Mines and Energy connected with the USAID-NREL Partnership for input on how to customize an auction for Colombia.

"The puzzle is figuring out how to craft an auction process that will provide the right price signals to wind and solar developers to invest and get their capacity on the ground," said David Hurlbut, NREL senior analyst and economist. "And how to do this in an environment where they'd be competing with hydropower for six years, then providing generation during shortage conditions through the El Niño years."

A hurdle for the NREL team—comprising Hurlbut, Engineer Sherry Stout, and Senior Grid Integration Researcher Barbara O'Neill—was the lack of legislative guidance that would typically inform such an auction.

"Colombia has a low carbon footprint due to the abundant hydro resources," said O'Neill. "For this reason, there is no grassroots or legislative push for something like a renewable portfolio standard. Instead, they needed an auction that was technology-neutral but that would provide a revenue stream sufficient to attract high initial capital cost/low variable-cost sources such as solar and wind."

NREL participated in a series of working sessions with the Colombian Commission for the Regulation of Energy and Gas to discuss how to structure the auction in the Colombian context. The sessions were key to allaying regulatory fears about the auction. NREL also worked with XM, the system operator, to discuss the best ways to integrate variable renewable energy in the future.

"A big part of this auction design involves long-term contracts and how they might emerge from the auction process to provide the revenue necessary for renewable energy projects to take flight while reasonably and fairly allocating risks across generators and customers," said Hurlbut.

The auction provides many benefits—longer-term contracts will attract international investment, reduced emissions will help Colombia achieve its Paris Agreement targets, and the cost savings from the auction will ultimately be transferred to Colombian energy customers through their energy bills.