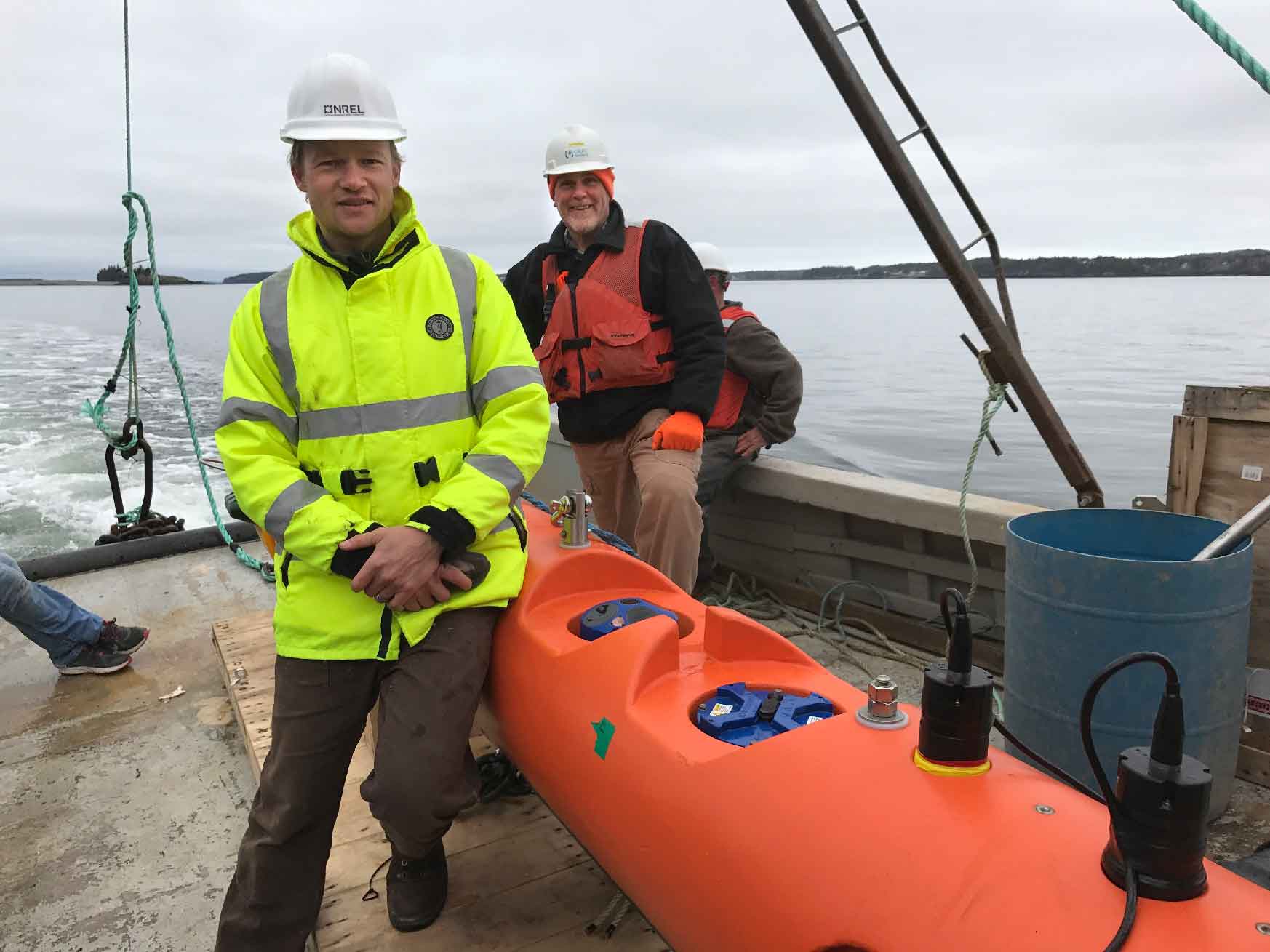 Researchers at the National Wind Technology Center at the National Renewable Energy Laboratory (NREL) recently deployed two sets of buoys off the shores of Oregon and Maine, each equipped with a variety of high-accuracy sensors that can detect wave and tidal movement. Data from these devices will be used to improve marine and hydrokinetic (MHK) devices.

“We’re characterizing the resource at a level of detail that has not been done at these sites,” says Project Manager Levi Kilcher.

Both buoys are designed to take similar measurements useful for developing future, energy-producing MHK devices—but with different applications. The Maine buoys are designed to assess tidal resources, whereas the Oregon buoys will obtain wave energy measurements in shallow water. Data from these buoys will be used to quantify the accuracy of various wave and tidal models, and in turn, reduce risks for developers.

These buoys allow researchers to “better understand the limitations and errors in existing global wave models,” says Kilcher. The data produced in Oregon and Maine assist in prioritizing wave energy efforts, creating a cohesive development process, and reducing risks in tidal and ocean energy development. Engineers will utilize the accumulated data to tailor future energy-producing devices—like wave energy converters—to the specific challenges of each site, such as withstanding heavy currents.

Not only does such tailored data and engineering expedite innovation in the wave and tidal current energy sectors, but it can encourage financial investments from banks, or organizations that are typically hesitant to invest in unproven technology.

“These data provide a critical step in allowing device developers to optimally design a device to survive and produce power in this environment,” says Rick Driscoll, the project’s associate scientist. “The data can also be used to develop and tune controllers before actually putting devices in the water.”

Each buoy’s site has been identified as an early-market site for wave and tidal energy. By using NREL, laboratory, and U.S. Department of Energy published models, the team identified likely locations for wave and tidal deployment over the next few decades. Each area offered excellent resources, easy access to transmission infrastructure, and ideal water depths.

Once general areas were selected, researchers from the Pacific Northwest National Laboratory ran models that “zoomed in even closer,” Kilcher says, “We could identify the exact places we wanted to take measurements.”

The NREL team placed their Maine buoys in the Western Passage, which divides the United States and Canada. Located near Eastport, Maine, the passage offers energetic tidal resources that may be ideal for future MHK deployment. Ocean Renewable Power Company Solutions, LLC, provided support for the project.

“Turbulence increases loads on the turbines, which decreases their lifetime,” Kilcher said.

Understanding the intensity of the underwater flows will assist researchers and developers in designing turbines uniquely suited for the Western Passage and other areas with similar levels of turbulence.

Two bottom-lander buoys measure the tidal velocity throughout a column of water reaching from the seafloor to the surface. The third buoy is equipped with a downward-looking acoustic profiler to assess turbulence. When correlated with the mean flow cycle, these turbulence and water flow measurements—taken over the course of a week—will provide the necessary data for model validation.

In Oregon, the two measurement buoys will provide necessary data for future deployments of wave energy conversion devices. With support from Integral Consulting, Inc., and Oregon Wave Energy Trust, researchers placed these buoys in shallow waters to gain additional insights into Pacific Coast wave energy. Until now, most regional measurements have been taken from deeper water.

The buoys will remain in place for 1 year and use accelerometers to determine wave height, length, frequency, and direction. Data will be used to validate computer models that specifically address shallow water.

An expanded data set assessing the broader wave and tidal resources across the United States is essential for furthering MHK development. NREL also intends to deploy buoys off the coasts of Alaska and California later in 2017.