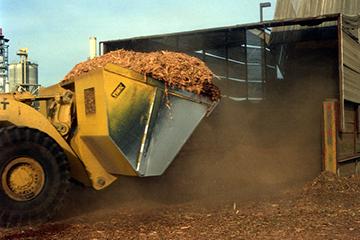 Biomass is 40%–60% oxygen, and its high level of oxygen makes producing fully hydrocarbon fuels technically challenging. A study is determining which biomass-derived oxygenates are most commercially feasible in drop-in fuels that are compatible with existing engines and fuel distribution.

Biomass feedstocks such as crop residues and algae are available on a scale that other renewable fuels cannot begin to match. There is enough domestic feedstock to potentially supply 30-45 billion gallons of fuel, which would lessen the country's dependence on petroleum and reduce greenhouse gases. Yet, while biofuels seem an appealing choice over conventional fuels, the challenge is to produce them in a way that, rather than requiring new infrastructure and vehicles, is compatible with existing pipelines, blending stations, fuel pumps, and engines. NREL research is investigating how to overcome this hurdle, and so far the results look very favorable.

The research will, in part, indicate if these drop-in fuels can meet existing diesel and gasoline quality specifications to the point that oxygenate blends with conventional fuels are functionally indistinguishable from petroleum-derived fuels. The research will also help determine the levels at which fuels that contain biomass-derived oxygenates are economically and commercially practicable for both diesel and gasoline applications.

"We want to minimize infrastructure and engine compatibility issues that can be barriers to fast commercialization," said NREL Principal Engineer Robert McCormick. "The ability to produce and use drop-in biofuels will leverage existing vehicle technology and fueling infrastructure, potentially lowering production costs and making the use of biofuels more feasible for consumers."

Typically, removing oxygenates, which hamper fuel efficiency, requires expensive production processes that eliminate some, but not all, oxygen. The study is looking at whether some lower levels of oxygenates can be tolerated in gasoline and diesel, and what the acceptable levels are for these refined fuel products.

Biomass is 40%–60% oxygen, and its high level of oxygen makes producing fully hydrocarbon fuels technically challenging. The process of fast pyrolysis followed by hydroprocessing to remove some of the oxygen may prove to be cost effective for producing low-level oxygenates that function well in fuel, thereby eliminating the expense of completely removing oxygenates. Fast pyrolysis involves rapidly heating biomass to decomposition in an oxygen-free environment to produce liquid products that can be upgraded to drop-in fuels. Further advancing the research will require large enough quantities of actual oxygen-containing biofuels for more realistic testing, including engine testing. The results presented in this study will provide some guidance to biofuels process developers on what oxygenate molecule types should be targeted.