An international research team, including scientists from the U.S. Department of Energy’s (DOE’s) National Renewable Energy Laboratory (NREL), has discovered and characterized a new family of cytochrome P450 enzymes that is critical to improving the conversion of lignin—one of the main components of plants—into valuable products such as nylon, plastics, and chemicals.

Cytochrome P450s are some of the most versatile enzymes on the planet. These proteins are found in the human body and are involved in many metabolic pathways, including metabolizing potentially toxic compounds. Cytochrome P450s have been studied for decades and have been classed into Families A through M. 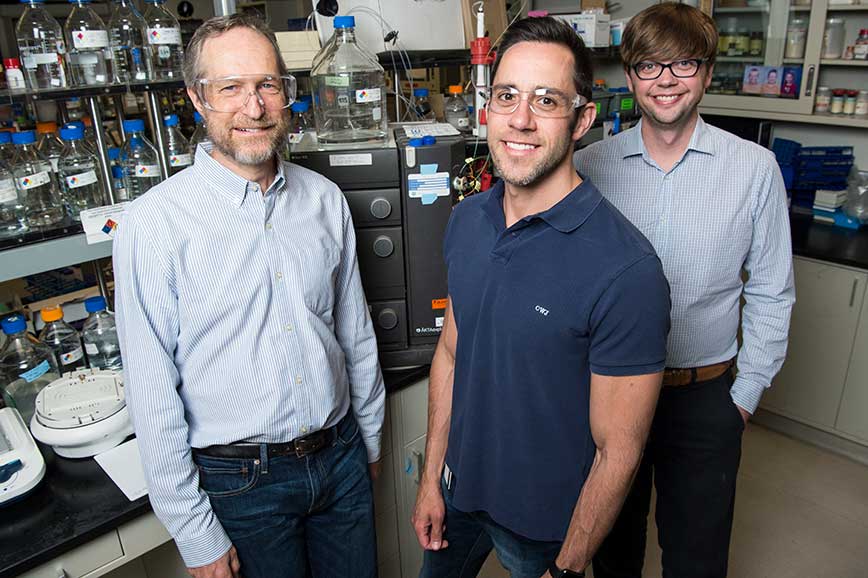 Published in Nature Communications, “A promiscuous cytochrome P450 aromatic O-demethylase for lignin bioconversion” outlines how the international team of researchers determined the molecular structure of a previously uncharacterized cytochrome P450 that turned out to have a completely different, two-component architecture, which represents a new class of P450s: Family N.

Learning about the structure and function of enzymes helps scientists improve the microbes and thus enhance processes like the biological conversion of lignin from plant biomass into valuable products. And P450s are a great place to start.

“Cytochrome P450s have been engineered to perform myriad functions important for biotechnological applications,” said Gregg Beckham a Senior Research Fellow at NREL and one of the authors of the paper. “They’ve been engineered to be faster, better, specialists, or generalists. They are a versatile and highly plastic scaffold for biotechnology, and decades of directed evolution and protein engineering already have been done to tweak cytochrome P450s.”

The discovery of the new class of cytochrome P450s came about when Beckham asked Christopher Johnson, a molecular biologist in NREL's National Bioenergy Center and a co-author of the study, to find an enzyme that could convert guaiacol to catechol. Guaiacol represents one of the simplest building blocks of lignin, and catechol can be broken down into muconate, which is a platform chemical important in the production of several types of bioplastics. Johnson found a cytochrome P450 that converts guaiacol to catechol in a single step. To make it perform better, the team needed to understand how the enzyme works, which led to the team’s efforts to establish its molecular structure, and thus the discovery of this new P450 family.

Researchers studied how the enzyme interacts with its products and substrate and quickly realized that this cytochrome P450 is more than a guaiacol specialist; it’s a generalist that can perform demethylation on a variety of substances. Demethylation is the simple chemistry of removing a methyl group, and the microbial conversion of lignin relies on this critical reaction.

“This new cytochrome P450 enzyme is promiscuous and can degrade a lot of different lignin-based substrates,” said Beckham. “That’s good because it means that it can then be engineered to be a specialist for a specific molecule.”

In addition to NREL, this multidisciplinary collaboration—covering a range of expertise in structural biology, biochemistry, molecular dynamics, and quantum chemistry—includes researchers from Montana State University, University of Georgia, the University of California at Los Angeles, Brazil’s University of Campinas, and the United Kingdom's University of Portsmouth.

“This team from around the world has developed a new paradigm for doing one of the most important reactions in microbial lignin conversion—aromatic O-demethylation—which enables conversion of lignin into value-added products,” said Beckham. “And now we have one of the most well-known, versatile, engineerable, and evolvable classes of enzymes ready to go as a foothold for biotechnology to move forward and make the enzyme better.”

Funding for the research came from DOE’s Bioenergy Technologies Office.

NREL is DOE’s primary national laboratory for renewable energy and energy efficiency research and development. NREL is operated for DOE by The Alliance for Sustainable Energy, LLC.