A microscopic analysis of perovskite solar cells reveals new insight into how the devices degrade—information necessary for moving the technology closer to commercialization.

The research was conducted by scientists at the Department of Energy’s National Renewable Energy Laboratory (NREL) and at the University of Texas at Austin and was published in Nature Communications. The paper, “Impact of Grain Boundaries on Efficiency and Stability of Organic-Inorganic Trihalide Perovskites,” outlined the first quantitative nanoscale photoconductivity imaging of two perovskite thin films with different power conversion efficiencies. 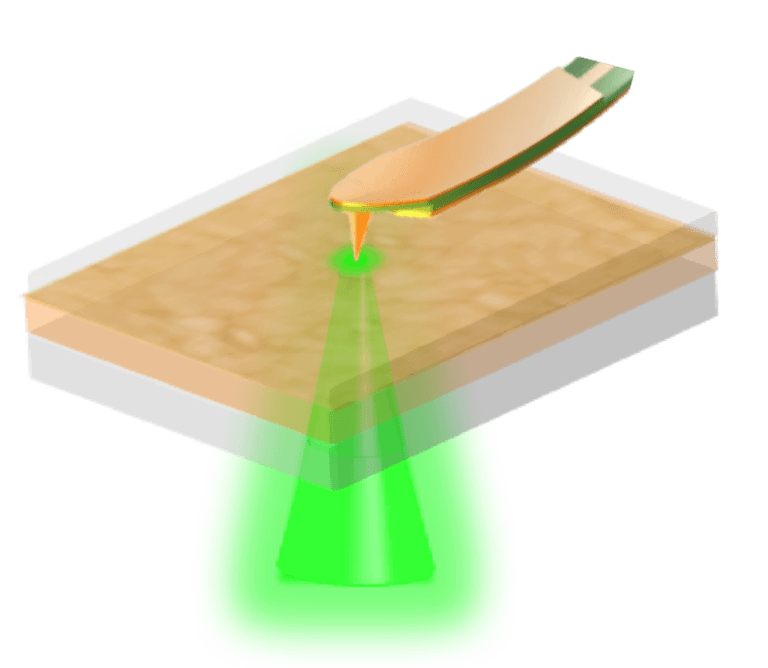 Illustration shows the microwave impedance microscopy technique illuminating the solar cell from below.

Highly efficient at converting sunlight to electricity, perovskite solar cells have emerged as a revolutionary new technology with the potential to be more easily manufactured and at a lower cost than silicon solar cells. Ongoing research, including at NREL, focuses on moving perovskites beyond a laboratory setting.

The researchers took a close look at two organic-inorganic hybrid perovskite thin films made of methylammonium lead iodide (CH3NH3PbI3 or MAPbI3). Perovskite solar cells possess a polycrystalline structure with individual crystals grains. These grains are adjacent to other crystals and the area where the crystals touch is known as a grain boundary.

“The general assumption is that degradation starts with grain boundaries,” said Kai Zhu, a senior scientist in NREL’s Chemistry & Nanoscience Department and co-author of the paper. “We were able to show that degradation is not really starting from the visible boundaries between grains. It’s coming from the grain surface.” As a result, this implies that the surface of a perovskite solar cell should be targeted for improving device performance.

The two thin films examined varied slightly. The first, with smaller grains, had a power conversion efficiency (PCE) of 15 percent. The second, with larger grains, had a PCE of 18 percent. Each film was protected by a layer of the plastic polymethyl methacrylate (PMMA); earlier research showed unprotected films tended to degrade within several hours under ambient conditions. The solar cells, illuminated by a focused laser beam from below, were examined by a novel instrument, termed light-stimulated microwave impedance microscopy (MIM). This allowed researchers to map the nanoscale photoconductivity of the samples.

“With the MIM technique, for the first time we were able to visualize the intrinsic nanoscale photo-response, which is of fundamental importance to solar cell performance,” said Keji Lai, an assistant professor of physics at the University of Texas at Austin, “Grain boundaries are usually the weak links in functional materials.” Lai worked with his colleague, associate professor Xiaoqin Li, graduate student Zhaodong Chu, and postdoc researcher Di Wu.

The analysis showed the photoconductivity of the 18 percent sample, which contained a better crystallinity, was five to six times higher than that of the other thin film. The perovskite thin films were tested over the course of a week in an area that was 74 degrees Fahrenheit and had 35 percent relative humidity. Little change in photoconductivity was observed the first few days, but by the third day the measure began to drop as water molecules moved through the PMMA coating. The drop in the photoconductivity emerged from the disintegration of the grains and not from the grain boundaries, the research found. In this instance, the scientists noted, the grain boundaries “are relatively benign” and determined perovskite films with better crystallinity should be a direction of future research for improving perovskite solar cell performance and durability.

Other co-authors from NREL were Mengjin Yang and Philip Schulz.