Rigid silicon solar panels dominate the utility and residential markets, but opportunity exists for thin-film photovoltaic and emerging technologies notable for being lightweight and flexible, according to scientists at the U.S. Department of Energy’s National Renewable Energy Laboratory (NREL).

Thin films such as cadmium telluride (CdTe) and copper indium gallium selenide (CIGS), along with perovskites and other new technologies, could be ideal for generating the electricity needed for unmanned drones, portable chargers, and building facades. The opportunities and challenges inherent in widespread adoption of these ideas appear in the new Nature Energy paper, “Increasing Markets and Decreasing Package Weight for High Specific Power Photovoltaics.”

“We explore the limits behind power-to-weight ratios and how this can generate value for emerging players in photovoltaics to enable them to reach gigawatt scale without having to directly compete with silicon solar panels,” said Matthew Reese, an NREL researcher and lead author of the paper. 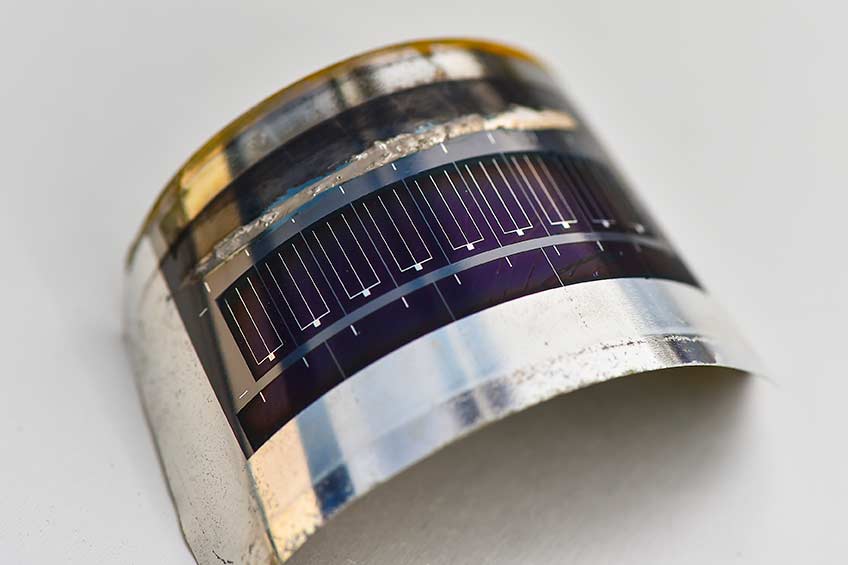 This lightweight CIGS photovoltaic cell, on flexible stainless steel, was made by Matthew Reese and his team at NREL. (Photo by Dennis Schroeder / NREL)

Silicon panels constitute 95 percent of the global solar market, generating electricity for utilities, residences, and businesses, but the researchers identified applications that must consider value propositions beyond the standard value triad of cost, efficiency, and reliability used for conventional photovoltaic (PV) panels. Flexibility and portability will be important factors, with the performance of the technology quantified in terms of watts per kilogram.

The researchers identified three high-value markets, each with a potential to cumulatively generate a gigawatt (GW) of electricity—at a price above $1 a watt—over the next 10 years:

The researchers identified these markets as smaller but significant and ones that will pay a premium for the added value of the technology being lightweight to support initial, low-scale production. As production increases, lower costs will follow.

The NREL team determined the lower limit for a lightweight PV device is between 300 and 500 grams per square meter. Below that would reduce reliability, durability, and safety. A lightweight module on the lower side of that range could generate more than a kilowatt of electricity from something that weighs as little as a six pack of soda. Conventional modules, even without the additional weight from the mounting equipment, might require 150–200 pounds to generate this much power.

Funding for the work came in part from the U.S. Office of Naval Research and in part through NREL’s Laboratory Directed Research and Development initiative.