A unique experiment that explored how well algae grows in specific regions of the United States yielded data that could prove useful as the industry moves forward, according to research from the U.S. Department of Energy’s (DOE’s) National Renewable Energy Laboratory (NREL) and Arizona State University (ASU).

Researchers established identical raceway-style ponds in five outdoor locations to cultivate and harvest three strains of algae during the four seasons. The project originated from a 2012 DOE award to ASU to lead the Algae Testbed Public-Private Partnership, a collaborative effort that includes NREL and focuses on providing year-over-year data on algal cultivation.

“This data is extremely valuable to anyone interested in growing algae outdoors in different regions of the United States,” said Eric Knoshaug, a senior scientist in NREL’s National Bioenergy Center and co-author of the newly published paper, “Unified Field Studies of the Algae Testbed Public-Private Partnership as the Benchmark for Algae Agronomics.” 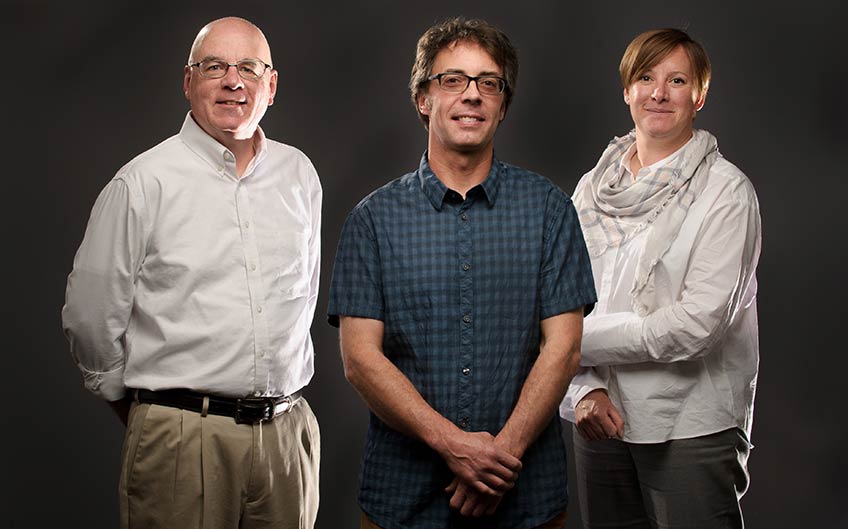 Ed Wolfrum (left), Eric Knoshaug and Lieve Laurens are co-authors of the paper "Unified Field Studies of the Algae Testbed Public-Private Partnership as the Benchmark for Algae Agronomics." Photo by Dennis Schroeder / NREL

Published in Nature Scientific Data, the paper’s other co-authors are Ed Wolfrum and Lieve Laurens of NREL; Valerie Harmon of Harmon Consulting Inc.; and Thomas A. Dempster and John McGowen from the Arizona Center for Algae Technology and Innovation at ASU.

The testbed sites were in the Southwest desert, in Mesa, Arizona; the California coast, in San Luis Obispo; the inland Southeast, in Atlanta, Georgia; the Pacific tropics, in Kona, Hawaii; and the coastal Southeast, in Vero Beach, Florida. Ponds holding about 1,000 liters of water were installed near the end of 2013. Harvesting operations started in mid-2014 and continued through the middle of the next year. The data—everything from temperature and pH of the water to the amount of algae harvested and ambient weather conditions—were collected continuously.

Wolfrum and Knoshaug curated the resulting data. “Other researchers can take a look at this and use the data to quantify the effects of humidity, the effects of temperature, and the effects of light intensity because we kept all the variables we could constant,” said Wolfrum, a principal researcher in NREL’s Biosciences Center. “The only thing left is the geography and the environment.” The paper goes into detail about how researchers collected the data and determined the quality of the information.

The 19-month experiment ended with Florida proving to be the best of the sites for algae production, with its humidity and year-round temperatures that don’t dramatically swing between hot and cold. But not everyone interested in growing algae can do it in Florida, so the data enables others to make predictions on possible sites and to develop crop protection strategies.