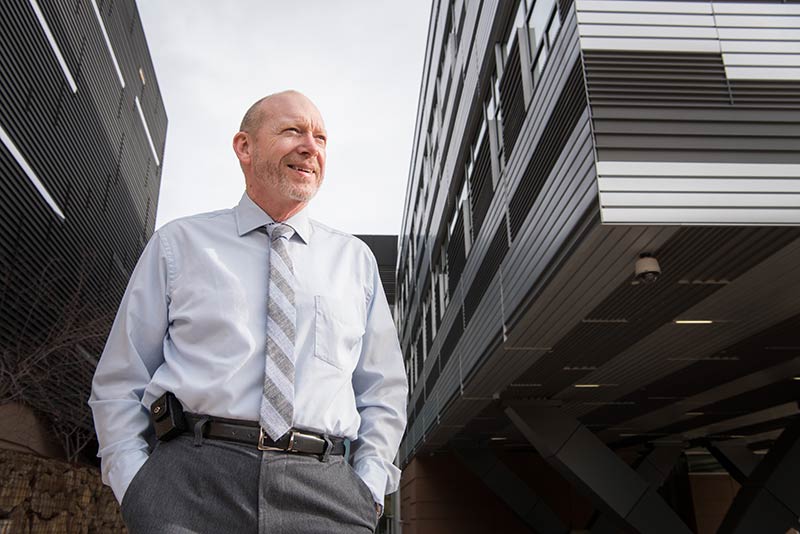 John Turner is a research fellow at the National Renewable Energy Laboratory, where he has worked since 1979. Credit: Dennis Schroeder/NREL.

Scientists at the U.S. Department of Energy's National Renewable Energy Laboratory (NREL) developed a method which boosts the longevity of high-efficiency photocathodes in photoelectrochemical water-splitting devices.

Using a photoelectrochemical (PEC) device is a promising way to produce hydrogen. A PEC cell absorbs sunlight and converts that energy into hydrogen and oxygen by splitting water molecules. Unfortunately, high efficiency devices developed to date quickly degrade in the acidic solution to which the cell is exposed. The challenge of making a more durable cell must be overcome before renewable hydrogen from PEC devices can become commercially viable.

The concept of using an integrated tandem cell based on the NREL high-efficiency tandem solar cell to split water and produce hydrogen was developed 18 years ago by research fellow John Turner, who has been with the laboratory since 1979. He designed a tandem solar cell containing layers of gallium indium phosphide (GaInP2) and gallium arsenide (GaAs) semiconductors to absorb the sunlight and produce the power necessary for the photoelectrochemical water-splitting reaction. Turner's device held the record for the highest solar-to-hydrogen efficiency, until it was finally eclipsed in 2015.

The paper, "A graded catalytic-protective layer for an efficient and stable water-splitting photocathode," appears in the new issue of Nature Energy. Jing Gu, a postdoc with Turner, lead the effort. She is now an assistant professor at San Diego State University. Along with Turner, the co-authors all were from NREL: Jing Gu, Jeffery A. Aguiar, Suzanne Ferrere, Xerxes Steirer, Yong Yan, Chuanxiao Xiao, James L. Young, Mowafak Al-Jassim, and Nathan R. Neale.

This Nature Energy paper describes how NREL researchers determined that greater photocathode stability and high catalytic activity can be achieved by depositing and annealing a bilayer of amorphous titanium dioxide (TiOx) and molybdenum sulfide (MoSx) onto GaInP2. During a 20-hour durability test, the photocathode retained 80 percent of the initial electricity generated. The TiOx and MoSx produced a catalyst protection layer and served to protect the GaInP2 from the acidic solution.

"This paper, along with our previous paper on surface protection published in Nature Materials, shows that considerable improvement in the stability and activity of these photoelectrochemical devices can be made," Turner said.

Hydrogen is currently used to upgrade crude oil for fuels production and in the synthesis of ammonia, critically important for food production. Benefits from the NREL research come by producing hydrogen from renewable sources, instead of the steam reforming natural gas process now commonly in use. That process releases carbon dioxide into the atmosphere, thereby contributing to the greenhouse effect.

The research was funded by the Energy Department's Office of Science, Office of Basic Energy Sciences, Solar Photochemistry Program. This effort benefits from work on photoelectrochemical water splitting being funded out of the department's Fuel Cell Technologies Office.