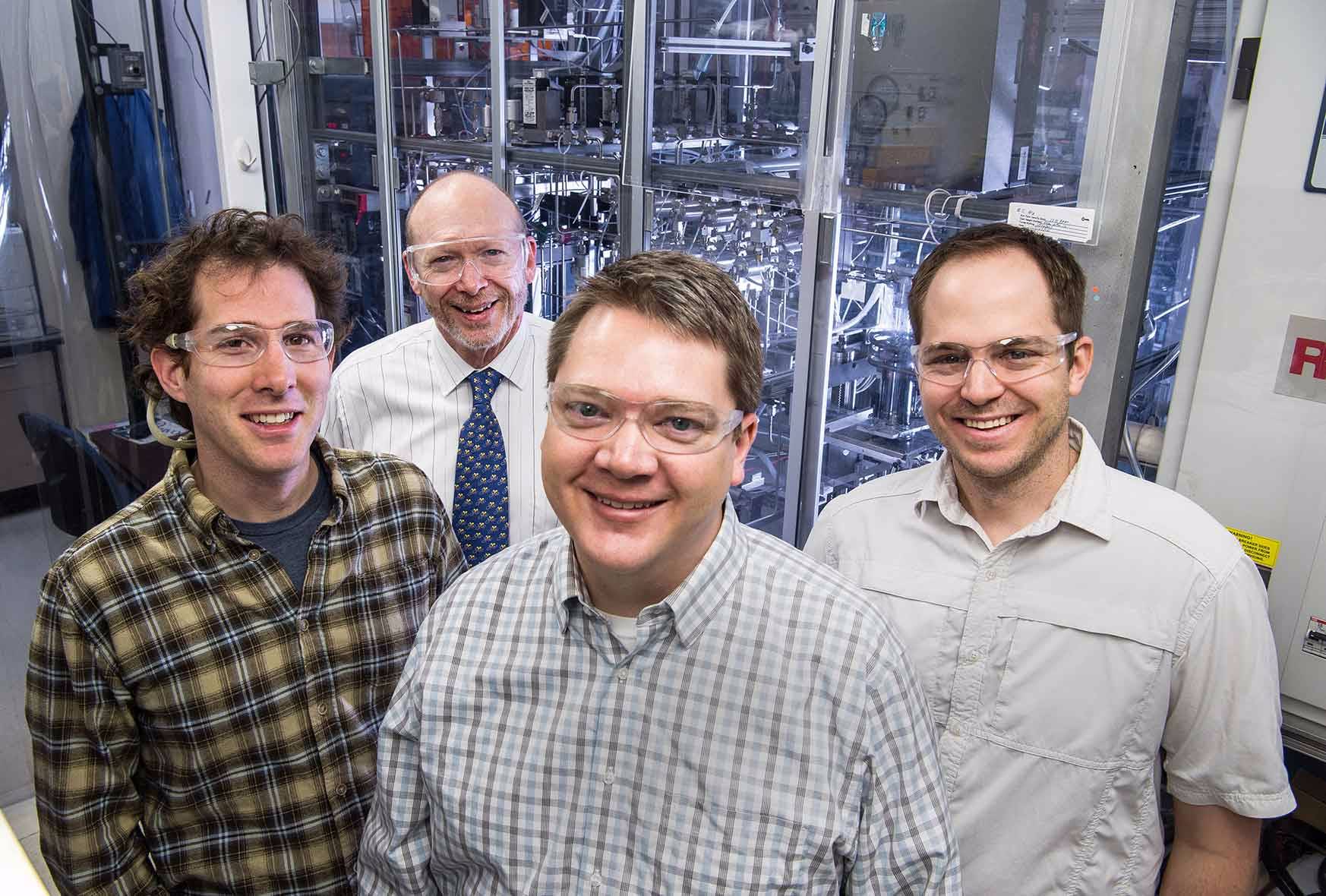 The new solar-to-hydrogen (STH) efficiency record is 16.2 percent, topping a reported14 percent efficiency in 2015 by an international team made up of researchers from Helmholtz-Zentrum Berlin, TU Ilmenau, Fraunhofer ISE and the California Institute of Technology. A paper in Nature Energy titled Direct Solar-to-hydrogen Conversion via Inverted Metamorphic Multijunction Semiconductor Architectures outlines how NREL’s new record was achieved. The authors are James Young, Myles Steiner, Ryan France, John Turner, and Todd Deutsch, all from NREL, and Henning Döscher of Philipps-Universität Marburg in Germany. Döscher has an affiliation with NREL.

The record-setting PEC cell represents a significant change from the concept device Turner developed at NREL in the 1990s.

Both the old and new PEC processes employ stacks of light-absorbing tandem semiconductors that are immersed in an acid/water solution (electrolyte) where the water-splitting reaction occurs to form hydrogen and oxygen gases. But unlike the original device made of gallium indium phosphide (GaInP2) grown on top of gallium arsenide (GaAs), the new PEC cell is grown upside-down, from top to bottom, resulting in a so-called inverted metamorphic multijunction (IMM) device.

This IMM advancement allowed the NREL researchers to substitute indium gallium arsenide (InGaAs) for the conventional GaAs layers, improving the device efficiency considerably. A second key distinguishing feature of the new advancement was depositing a very thin aluminum indium phosphide (AlInP) “window layer” on top of the device, followed by a second thin layer of GaInP2. These extra layers served both to eliminate defects at the surface that otherwise reduce efficiency and to partially protect the critical underlying layers from the corrosive electrolyte solution that degrades the semiconductor material and limits the lifespan of the PEC cell.

Turner’s initial breakthrough created an interesting new way to efficiently split water using sunlight as the only energy input to make renewable hydrogen. Other methods that use sunlight entail additional loss-generating steps. For example: Electricity generated by commercial solar cells can be sent through power conversion systems to an electrolyzer to decompose water into hydrogen and oxygen at an approximate STH efficiency of 12 percent. Turner’s direct method set a long-unmatched STH efficiency record of 12.4 percent, which has been surpassed by NREL’s new PEC cell.

Before the PEC technology can be commercially viable, the cost of hydrogen production needs to come down to meet DOE’s target of less than $2 per kilogram of hydrogen. Continued improvements in cell efficiency and lifetime are needed to meet this target. Further enhanced efficiency would increase the hydrogen production rate per unit area, which decreases hydrogen cost by reducing balance-of-system expenditures. In conjunction with efficiency improvements, durability of the current cell configuration needs to be significantly extended beyond its several hours of operational life to dramatically bring down costs. NREL researchers are actively pursuing methods of increasing the lifespan of the PEC device in addition to further efficiency gains.

While an alternative configuration where the device isn’t submerged in acidic electrolyte and instead is wired to an external electrolyzer would solve the durability challenge, a techno-economic analysis commissioned by DOE has shown that submerged devices have the potential to produce hydrogen at a lower cost.

The latest research was funded by the Energy Department's Fuel Cell Technologies Office in the Office of Energy Efficiency and Renewable Energy.