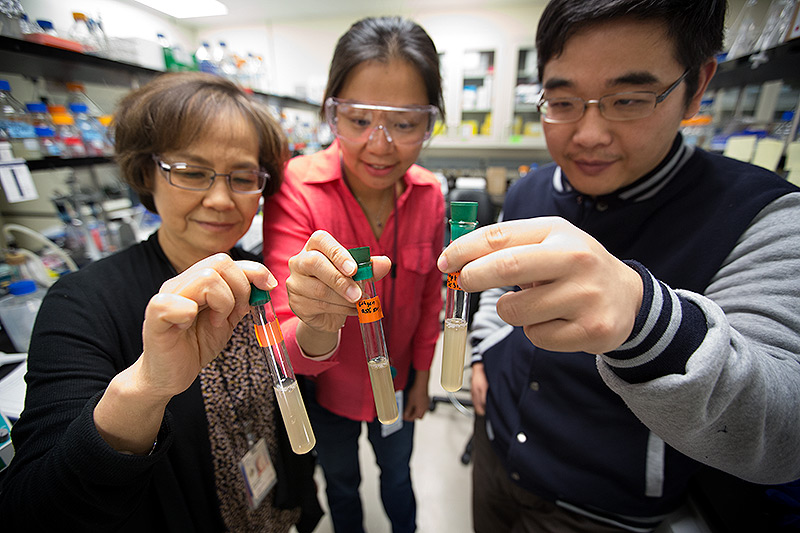 Scientists at the U.S. Department of Energy's National Renewable Energy Laboratory (NREL) made the surprise discovery that a metabolic pathway to take up CO2 exists and functions in a microorganism capable of breaking down and fermenting cellulosic biomass to produce biofuels including hydrogen and hydrocarbons.

Clostridium thermocellum is among the most efficient bacteria in directly converting cellulosic materials into hydrogen and hydrocarbons biofuels. Most bacteria feeding upon organic carbon compounds, such as glucose or xylose, release CO2 as a waste byproduct, decreasing the maximum amount of products the microorganism can produce per carbon atom measured as carbon efficiency.

Other scientists have found the addition of a form of CO2, known as bicarbonate, into the medium containing the bacterium actually promotes the growth of C. thermocellum, yet its mechanistic details remained a puzzle. This enhanced growth implied the bacterium had the ability to use CO2 and prompted NREL researchers to investigate the phenomena enhancing the bacterium's growth.

"It took us by surprise that this microbe can recapture some of the CO2 released during growth while they consume sugars derived from cellulosic biomass," said Katherine J. Chou, a staff scientist with NREL's Photobiology group and co-author of the new paper "CO2-fixing one-carbon metabolism in a cellulose-degrading bacterium Clostridium thermocellum." The research is in the new issue of the journal Proceedings of the National Academy of Sciences of the United States of America.

Using carbon isotopes coupled with mass spectrometry analysis, the researchers were able to track how CO2 enters the cell, identify the enzymes critical to CO2 uptake, and how CO2 incorporates into products thereby discovering a new metabolic route unknown to the scientific community. Many species of bacteria have the pathway in place for CO2 uptake, but before the new research, the pathway was not associated with the role of carbon dioxide assimilation (otherwise known as CO2 fixation).

The pathway enables the bacterium to use both CO2 and organic carbons during its growth, which is counter-intuitive because it's much more common for this type of organism to use one and not the other, especially in heterotrophic microbes.

NREL researchers and their collaborators determined adding bicarbonate increased the apparent carbon efficiency of C. thermocellum from 65.7 percent to 75.5 percent. The finding underscores the metabolic plasticity of the microbe and raises various possibilities on how the bacterium is able to use both organic carbons and CO2 without breaking the rules of thermodynamics in energy conservation. The discovery also provides a paradigm shift in the fundamental understandings of carbon metabolism in a cellulose degrading bacterium.

"Our findings pave the way for future engineering of the bacterium as a way to improve carbon efficiency and to reduce the amount of CO2 released into the environment," Chou said. With the observed improved carbon efficiency, this work inspires future research to redirect more cellular electrons in support of increased hydrogen production, a key goal for the funded research. In addition to Chou, the co-authors from NREL are Wei Xiong, Lauren Magnusson, Lisa Warner, and Pin-Ching Maness. Two BioEnergy Science Center (BESC) co-authors are Paul Lin and James Liao from the University of California, Los Angeles, where Chou earned her Ph.D. in chemical and biomolecular engineering.

The latest research into the bacterium was financed by the NREL Director's Fellowship Program, Energy Department's Fuel Cell Technologies Office, as well as Office of Biological and Environmental Research in the DOE Office of Science.