Turning the Tide for Renewables in Alaska

The ocean was calm when the Peregrine Falcon ship left the harbor in Homer, Alaska, on a July morning with three moorings resting on its deck, all loaded with scientific instruments.

Eighteen hours later, these moorings were lowered into the silty waves where they collected data for two months. Two of the moorings were 12-foot submarine-shaped buoys that floated 60 feet below the inlet's surface, and the third rested on the sea floor; all three gathered data on the velocity, turbulence, and sediments at the nation's top-ranked tidal energy site.

A highly energetic corner of the Pacific Ocean, Cook Inlet holds one of the greatest tidal resources on Earth. All that energy has the potential to reduce Alaska residents' dependence on declining oil and gas production and provide excess renewable energy that could stimulate the Alaskan economy. That is why researchers from the National Renewable Energy Laboratory (NREL) submerged their moorings in Cook Inlet; the data they collected will help identify important details of the opportunities and challenges that come with turning these surging waters into a reliable and renewable power source for Alaskans living on the nearby shore.

But that is no easy feat.

"Models and local knowledge tell us the currents here are extremely strong. There is silt and sea ice in the winter. We expect the turbulence to be intense," said Levi Kilcher, an NREL senior scientist who leads ocean energy resource assessments like this one.

Capturing Energy From the Ebb and Flow

Just as wind turbines extract energy from moving air, underwater turbines can create energy from the ebb and flow of the tides. Tidal energy has the potential to provide more than 220 terawatt-hours per year of clean, renewable energy in the United States, which is enough to power 21 million homes. Tidal technologies are promising, with new demonstration projects showing the world that they can operate reliably and efficiently. And yet, it is still an early-stage industry when compared to wind and solar. As of September 2020, only three tidal turbines were operating in the United States.

"So much of our work builds on NREL's background in wind power," Kilcher said. "It took time to understand the importance of accounting for turbulence in wind turbine designs. We're learning from that and getting ahead of the turbulence questions now by making these measurements. But in the ocean, there are so many additional environmental challenges: We've also got to deal with sea ice, sediment, marine growth—not to mention the corrosive properties of the salt water itself. So, we're trying to understand the details of these environmental challenges as well."

For the Cook Inlet study, Kilcher led a multilaboratory team that included researchers from Pacific Northwest National Laboratory and Sandia National Laboratories. The team also contracted help from TerraSond Limited, Ocean Renewable Power Company, and Integral Consulting. NREL has performed similar studies in Puget Sound, Washington, and off the coast of Maine, but the Alaskan environment poses unique challenges: currents that are stronger, sea ice in winter, and sediments that wash into the inlet from the glaciers dotting the nearby mountains. The turbulence stirs up sand and silt from the inlet floor, creating frothy, gray water at the surface and a slurry of sand and gravel at the bottom.

"The strong currents at the site create sand dunes on the sea floor that are 30 feet tall. Instruments have been lost at this site, most likely buried in sand," Kilcher said. "We've used midwater moorings and inflatable chambers in the Tidal Bottom Lander to ensure we get this stuff back."

It is an environment Kilcher knows well. He grew up in Homer, a small fishing town on Cook Inlet where he played on the beach of these icy waters, practiced subsistence fishing, and later worked as a deckhand for his father's freight business. He earned a Ph.D. in oceanography with a focus on ocean turbulence from Oregon State University. Ten years ago, he brought his expertise to NREL's Water Power team to help design tidal power systems that could, one day, power his hometown.

"I've always been attracted to problems that seem unsolvable. Turbulence is one of those problems, and tidal energy has sometimes felt like one too, but the industry is starting to see real success," Kilcher said.

Now, to help in the effort, Kilcher and his team are gathering some of the information needed to start designing projects in Cook Inlet. In addition to turbulence, researchers are measuring the water's velocity, salinity, temperature, and the sediment composition and concentration. With that data, they will validate and refine models to paint a much more detailed picture of the site, including how much energy could be generated there and how to build tidal turbines that can withstand the elements.

The detailed understanding of the Cook Inlet tidal energy resource that stems from this project will allow the industry to design tidal turbines that perform reliably for decades in the harsh Cook Inlet environment. Ultimately, this work could also help design turbine arrays that maximize power production while minimizing impacts to marine life and the inlet's ecosystems.

Having access to clean, affordable energy would transform the Alaskan economy, which is currently facing a deep economic recession due to decreased oil and gas production and high energy prices. Alaskan residents depend on oil and gas not just for jobs and state revenue but also for heating and power. Because of their extreme climate, remote location, and lack of infrastructure, they spend twice as much on energy as the average American; many communities pay three times more, according to the Cold Climate Housing Research Center's 2018 Alaska Housing Assessment. 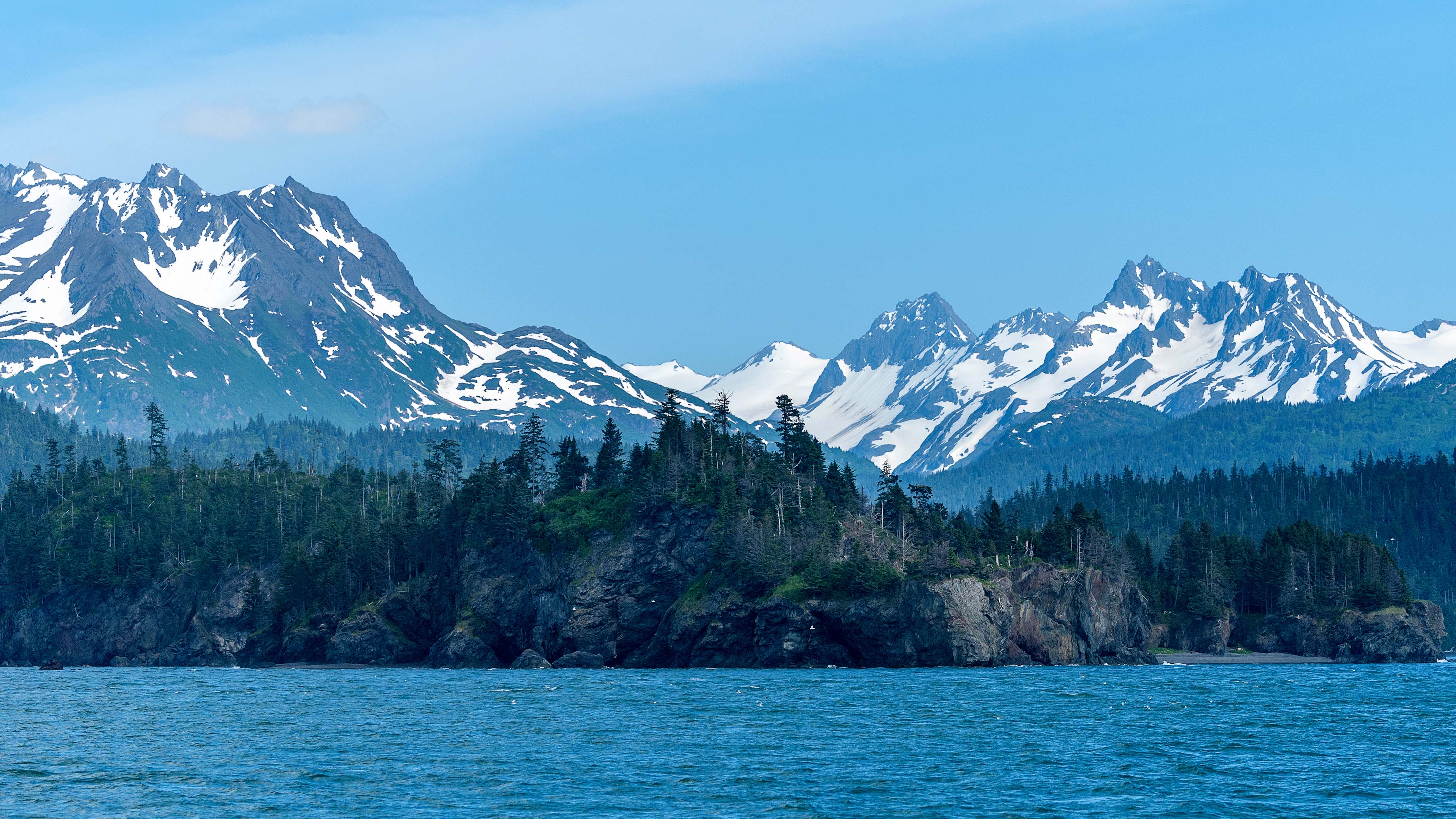 The Cook Inlet site is estimated to hold as much as 18 gigawatts of tidal energy potential—more than 20 times the amount used by all the road-connected communities of Alaska.

"It's a huge amount of power that we have access to at our doorstep," said Chris Rose, executive director of the Renewable Energy Alaska Project, a nonprofit that advances clean energy solutions for Alaska. "The economic and environmental benefits would be immense."

With affordable energy, local industries could process the raw materials harvested in Alaska, such as wood, minerals, and fish, rather than exporting them to places with cheaper energy prices. Communities could switch from diesel to electric power for transportation and heating. With surplus electricity, companies could even start making hydrogen as a fuel with which to export the state's vast renewable energy resources. 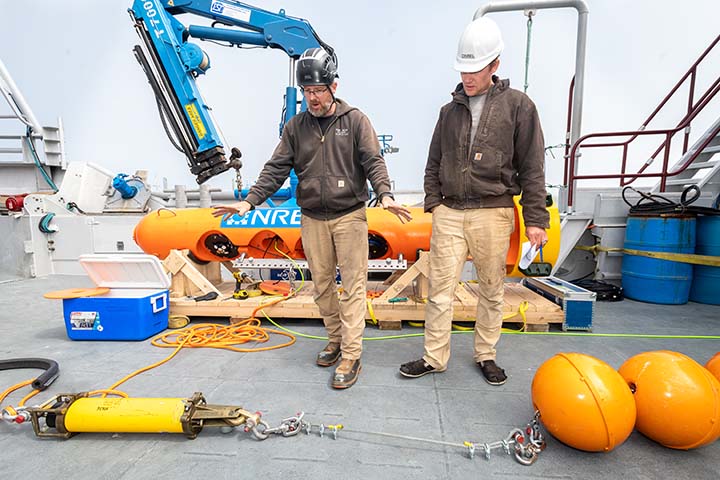 Andrew Smith (TerraSond Limited) and Levi Kilcher (NREL) perform a final walk-through of the mooring components and functionality on the deck of the Peregrine Falcon. Photo courtesy of Christopher Pike 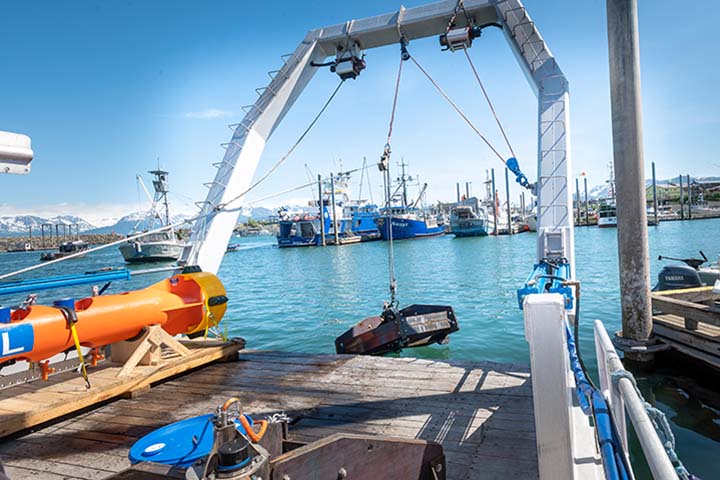 A 3,000-pound anchor—which holds the buoys in place in the strong tidal currents—is lowered off the afterdeck of the Peregrine Falcon in a test deployment. Photo courtesy of Christopher Pike

Tidal power technologies are at a critical stage of development; U.S. and European companies have had increasing success in single-device demonstration projects and are now planning pilot-project arrays that demonstrate long-term reliability and scalability. Cook Inlet's strong currents and harsh environment are ideal for demonstrating technology robustness. Given these successes, NREL engineers believe tidal technologies could make significant contributions to Alaska's energy demand in the next decade. This would help transform and revitalize the Alaskan economy and would be a significant contribution to help meet the marine energy industry's goal of 1 gigawatt of marine energy plants deployed by 2035.

"It's kind of like saying to the people in Arizona 40 years ago that if solar power ever gets really cheap, we'll have a bonanza here. Guess what? It happened." In other words, Rose said, "the time to start investing in tidal energy is now."

Out in Cook Inlet on the Peregrine Falcon, Kilcher deployed and successfully recovered three moorings to gather the data needed to engineer the next generation of tidal devices. When he returned to the harbor, the sun shone over the snow-covered mountains, and Kilcher looked for the humpback whales the team saw the day before. He thought about the precious data they had just collected and the device engineering it will facilitate. And he thought about the childhood dream that grew from these same waters.

I firmly believe we can find a cleaner future that's carbon neutral—carbon negative even," Kilcher said. "I've been working for 10 years to make marine energy a part of that solution."