On a clear night, Kaitlyn VanSant will be able to watch her work whiz by. Knowing the success of her project, however, will have to wait until her tiny, temporary addition to the International Space Station returns to Earth.

"My family and I have definitely been looking up at night more frequently," said VanSant, who earned her doctorate from the Colorado School of Mines in materials science last year. Now a postdoctoral researcher with NASA, VanSant holds a unique collaborative appointment at the National Renewable Energy Laboratory (NREL).

The pairing of NREL and NASA continues a long-standing alliance between solar power and space. Specialized photovoltaic (PV) panels turned to the sun have been used to generate electricity for Mars rovers and space probes, but the manufacturing costs of these high-efficiency solar cells are too high for use on Earth. Researchers at NREL are testing ways to bring those costs down for terrestrial applications and transforming how PV technologies could work in space as well. 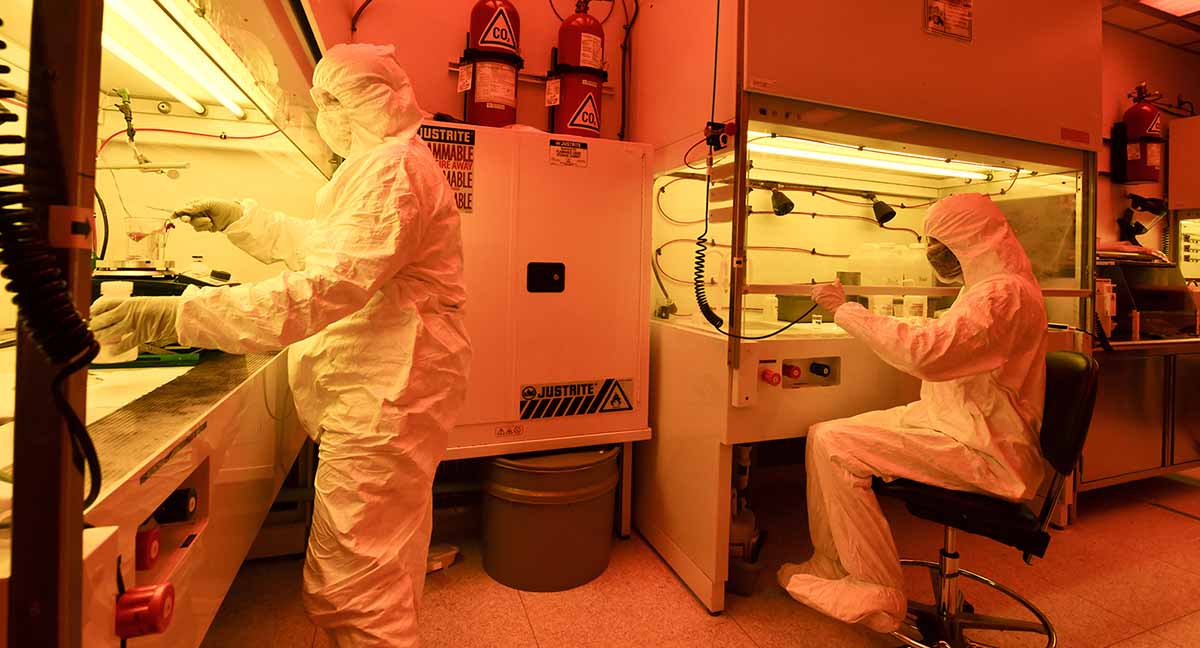 The latest test will evaluate the potential use of perovskite solar cells in space and assess the durability of materials used in those cells. VanSant worked with Ahmad Kirmani, Joey Luther, Severin Habisreutinger, Rosie Bramante, Dave Ostrowski, Brian Wieliczka, and Bill Nemeth at NREL to prepare the perovskite cells and materials. Eight of these samples are scheduled to launch to the space station in August and another set of 25 samples will be launched in the spring of 2022. The samples, each of which are a square inch in size, are part of the Materials International Space Station Experiment (MISSE) program and will be fastened to the outside of the orbiting platform.

The International Space Station (ISS) serves as an orbiting research laboratory and observatory that conducts scientific experiments in a range of fields that include astronomy, physics and materials science, to name just a few.

Flying about 250 miles above the earth and traveling at some 17,500 miles an hour, the ISS orbits the planet approximately 16 times every day. 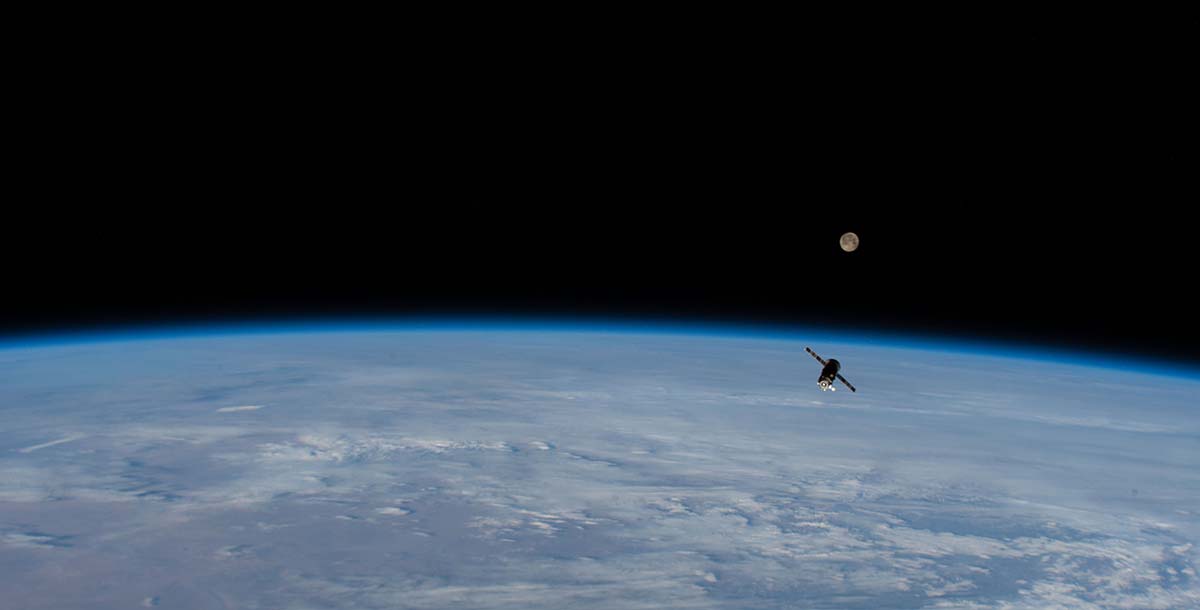 Flying about 250 miles above the earth and traveling at some 17,500 miles an hour, the ISS orbits the planet approximately 16 times every day. Photo Courtesy of NASA

"We get to prove very nascent technologies in such a way that we don't fool ourselves by simulating the space environment on the ground in a vacuum chamber, for example," said Timothy Peshek, an electrical engineer in the photovoltaics group at NASA Glenn Research Center in Cleveland and VanSant's postdoctoral adviser. "This is the real-world operation."

With approval in hand to return PV experiments to the space station, Peshek put out calls for researchers who might want to take part. Adele Tamboli, a researcher in the Materials Physics research group at NREL, welcomed the opportunity, and introduced Peshek to VanSant.

"Partnering with the National Renewable Energy Laboratory just made a lot of sense," said Peshek, himself a former post-doctoral researcher at NREL. "They had the facilities and abilities ready to go on day one."

This perovskite sample is in the intermediate crystal phase and about to be placed on a hotplate to fully crystallize. Photo by Dennis Schroeder, NREL

Solar power on Earth tends to be generated from silicon modules. Other PV technologies, such as those used in space, rely on materials from the III and V columns of the periodic table and are dubbed III-V cells. Scientists have experimented with stacking a III-V cell atop a layer of silicon to increase the efficiency of capturing sunlight to convert to electricity. By itself, the most efficient silicon solar cell is about 26%, when measured under the typical terrestrial solar spectrum. (The solar spectrum is different on Earth and in space.)

Tamboli was among the research group that set records in 2017 for III-V cells on silicon, including a triple-junction cell with an efficiency of 35.9%. She, along with VanSant and staff scientist Emily Warren, would later propose that these types of cells could find a use to power satellites in a low Earth orbit. Before that could happen, the cells had to be tested in the extreme conditions of space.

If the moon is a harsh mistress, space itself can be equally cruel. Equipment is subjected to extreme swings in temperatures and bombarded by solar radiation. When the ISS moves behind the Earth and away from the sun, the temperature plummets to 250 degrees below zero Fahrenheit. Emerging into sunlight spikes the temperature to 250 degrees above zero. 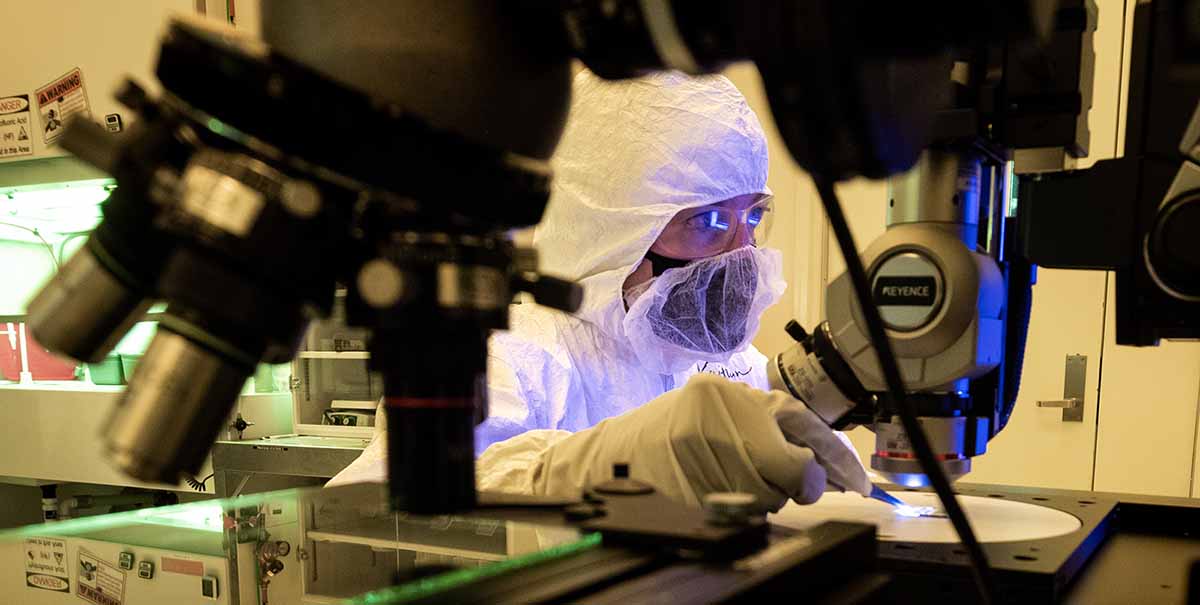 NREL researcher Kaitlyn VanSant conducts optical imaging of solar cells in NREL's cleanroom. Optical imaging of the solar cells is conducted both before and after exposure on the International Space Station, to evaluate how the samples degrade in the harsh space environment. Photo by Dennis Schroeder, NREL

"Radiation damage is a factor," said Warren. "Our record cell was gallium arsenide on silicon, and the one that we sent up is actually gallium indium phosphide on silicon. That was because we know that those materials would be more radiation tolerant."

SpaceX's cargo re-supply spacecraft carried NREL's III-V-on-silicon solar cell to the ISS in March 2020. VanSant, whose Ph.D. research centered on III-V-on-silicon tandem solar cells, worked with Michelle Young and John Geisz at NREL to fabricate the prototype cell for the MISSE project, and watched a broadcast of the rocket launch carrying it into space.

"I watched it with my two daughters," VanSant said. "They got a real kick out of it. I mean, you can't really watch a space launch without just being completely fascinated. Nobody can be blasé about a space launch."

The prototype spent 10 months affixed to the exterior of the ISS before being returned to Earth in January.

"The post-flight analysis of the cell gives us the opportunity to study how we want to evolve the design and to improve it for performance and to see whether it's realistic that this could be a technology for providing power in space," VanSant said.

NREL researcher Ahmad Kirmani fabricates and characterizes perovskite solar cells based on triple-cation and all-inorganic absorber chemistries for the upcoming MISSE-15 launch to the International Space Station by NASA. 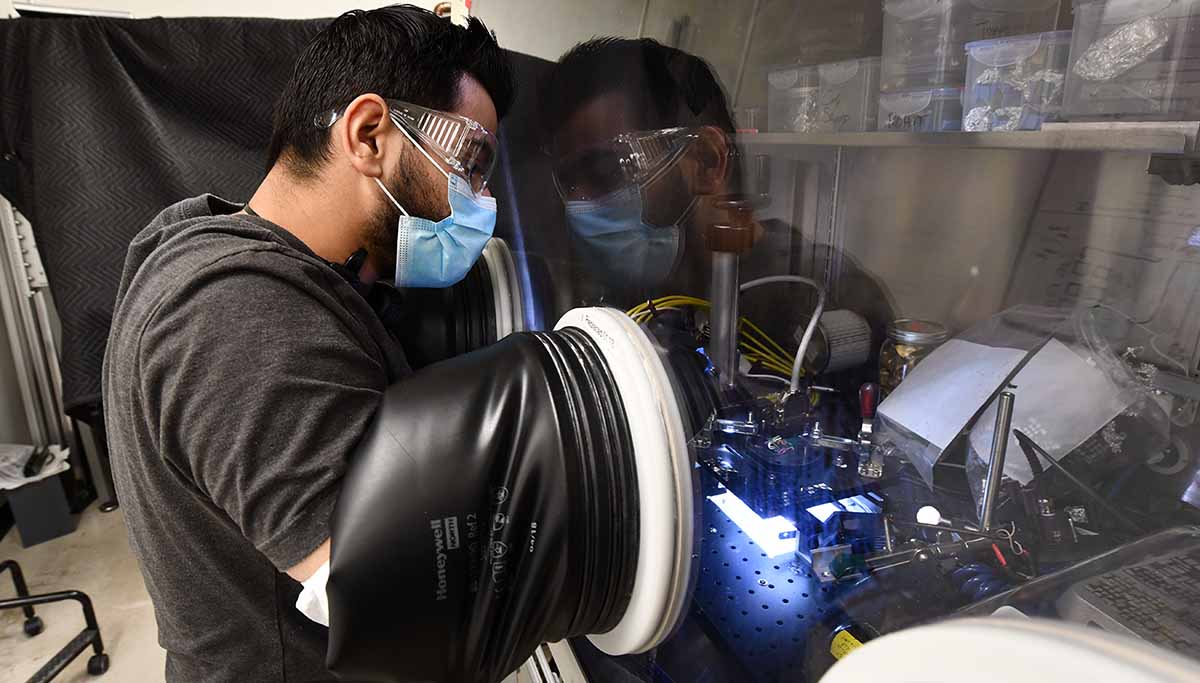 Now she is playing a waiting game for the perovskite solar cells and materials, which are expected to spend six months on the ISS. The process is not a straight shot into space. After NREL, the cells are shipped to Alphaspace, a Houston company that prepares the samples for operation on the MISSE platform and arranges the launch of the experiment aboard a SpaceX flight.

Perovskite solar cells are grown using a mixture of chemicals, and notable for a rapid improvement in how efficiently they are able to harness sunlight for energy. Ongoing experimentation involves readying perovskite cells for commercial use. The early perovskite cells degraded too quickly. Progress has been made but there is still work to do.

"It's a real interesting problem," Peshek said, "because these cells are notorious for having degradation problems. But the reason they degrade is because of moisture and oxygen. We don't have to worry about that in space."

Earth-bound experiments conducted in radiation test facilities demonstrate perovskite solar cells are surprisingly tolerant to radiation, said Joseph Luther, a senior scientist at NREL, co-adviser on the project, and an expert in perovskite technology. "They are very thin, and so that helps a lot. Most of the radiation just goes right through them. Silicon, relative to perovskites, is hundreds of times thicker. It's also very cheap due to the production scale and is awesome for terrestrial PV applications, but in space it's so thick that when radiation is impinging on the surface it gets absorbed and it damages the cell, causing problems." 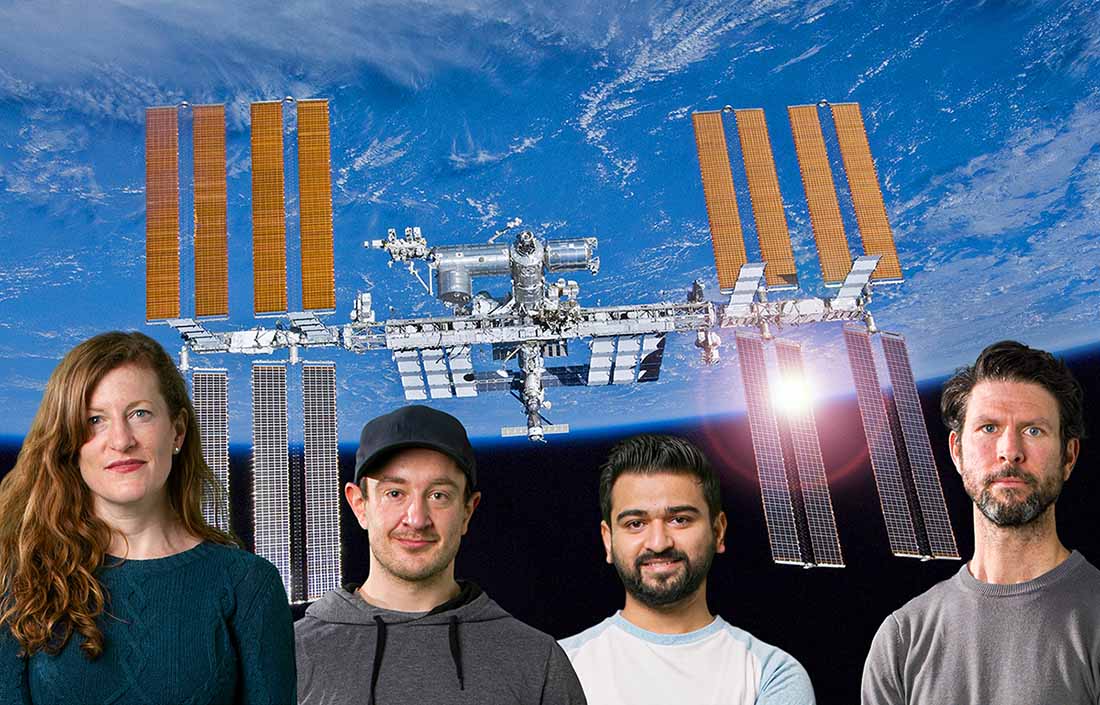 Lightweight perovskite solar cells would fit with NASA's ongoing mission to reduce the price for putting a payload into orbit, from about $10,000 per pound today to hundreds of dollars a pound within a quarter-century.

"We're very interested in trying to match the efficiency of the III-V solar cells, but do it in an extremely lightweight cell design," Luther said. "Perovskites can be deposited on plastics or metal foils and things like that, which are comparatively lightweight."

The efficiency of the solar cells was measured before leaving NREL and will be measured again upon their return. Both the cells and the component materials of the cells will also be characterized before and after flight, with imaging expertise provide by Steve Johnston. How well the perovskite cells and materials survived their trip will be immediately apparent. Lyndsey McMillon-Brown, a research engineer at NASA Glenn Research Center and principal investigator on the effort to bring working with Peshek on bringing perovskites to space, said a color change offers the first clue.

"The desirable phase for a perovskite solar cell is a black phase," she said. "The film is jet black. However, when these things degrade, they turn into a yellowy mustard color. So we're hoping to see black films upon their return."

"The desirable phase for a perovskite solar cell is a black phase," she said. "The film is jet black. However, when these things degrade, they turn into a yellowy mustard color. So we’re hoping to see black films upon their return." 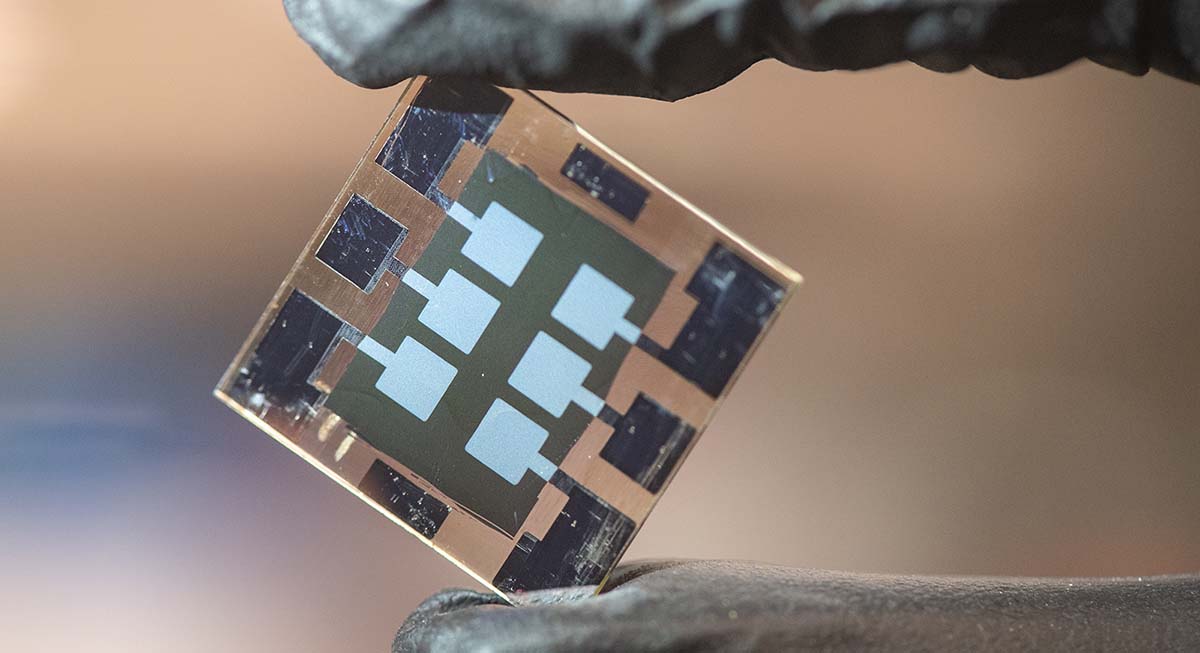 "The desirable phase for a perovskite solar cell is a black phase," she said. "The film is jet black. However, when these things degrade, they turn into a yellowy mustard color. So we’re hoping to see black films upon their return." Photo by Dennis Schroeder, NREL

The lessons learned from the time the perovskites spend in space could help with the technology terrestrially. "Some of the things that we're facing in space are extreme, like extreme temperature cycling, extreme UV exposure, but when you're here on Earth you still have UV exposure and you still have temperature cycling," McMillon-Brown said. "It's just not as rapid and frequent. We're still thinking that our lessons learned and our findings will apply and help make perovskites more marketable and gain a bigger commercial market share here on Earth, too."

While waiting for the return of the perovskite samples, VanSant receives a regular reminder of the ongoing work. She signed up for text notifications about when the ISS is visible overhead. When the time is right and her 7- and 9-year-old daughters are awake, they try to spot the space station.

"In addition to watching the ISS go by in the night sky, we have also watched NASA's video footage from cameras outside the ISS that show the Earth passing by as the ISS orbits," VanSant said. "The launch of these cells has been a great reminder to look up into the night sky, but also an opportunity to see things from a completely different perspective."