What does wave energy have to do with space exploration? It turns out, plenty.

The National Aeronautics and Space Administration (NASA) is working toward launching the Artemis I mission, an uncrewed lunar test flight, in 2021. It will be the maiden flight of the Space Launch System heavy-lift launch vehicle, as well as the Orion crew module (CM). Orion will orbit the moon for multiple days before returning to Earth and landing in the Pacific Ocean.

Wave energy experts at the National Renewable Energy Laboratory (NREL) are helping ensure the safety of Orion's future crew between splash down and recovery.

NASA and Lockheed Martin (LM), NASA's prime contractor for Orion, are using the Wave Energy Converter SIMulator (WEC-Sim), an open-source code developed by NREL and Sandia National Laboratories, to ensure that the CM uprights upon landing.

On the Up and Up

During the Apollo program, the CM landed upside-down in the ocean in nearly half of all missions.

When the CM is inverted (i.e., in the "Stable 2" configuration) or sideways, hatch doors and communications antennae can become submerged. An upside-down module can also impede recovery operations, as a submerged antenna can cut the recovery team's communications with the CM.

To address this persistent challenge, NASA/LM is planning to use the Orion Crew Module Uprighting System (CMUS). The uprighting system consists of five airbags intended to right the CM in the event of an inverted ocean landing and maintain the craft's upright position for 24 hours.

The team is employing the WEC-Sim tool to model the dynamics of the CM in the open ocean to aid in evaluating CMUS's performance and loads. Knowing the dynamics of how the CM and its uprighting system will perform is critical to ensuring a swift and safe recovery operation.

NASA's Orion program evaluates an updated design to the CMUS, the system of five airbags on top of the capsule that inflate upon splashdown, at the Neutral Buoyancy Lab at NASA’s Johnson Space Center in Houston. Video courtesy of NASA

In plain English? WEC-Sim allows researchers to better understand how devices that convert the motion of waves into usable energy will fare in the open sea. And this improved understanding can help to replace some of the would-be physical testing with computer modeling.

"Apollo also had an uprighting system with airbags, which was tested in more than 100 uprighting tests," said Molly Selig of NASA's Johnson Space Center.

Unlike the Apollo Uprighting System that came before it, the Orion Crew Module Uprighting System will be subjected to a much smaller number of tests, instead relying more heavily upon modeling. This is where WEC-Sim comes into play.

"WEC-Sim caught our attention as a viable option for modeling the dynamics of the CM in the open ocean since its size is similar to that of the wave energy converters that WEC-Sim was designed to simulate," said Tannen VanZwieten of the NASA Engineering and Safety Center. "Both require a fairly high-fidelity model of the interaction with the wave field to capture the motion of the system."

Essentially, WEC-Sim is helping NASA and Lockheed Martin to credibly model forces and the motion of the CM in the ocean.

NASA highlighted their findings from these tests in a recent paper presented at OCEANS 2019, an annual conference for maritime professionals dedicated to the protection and utilization of the world's oceans. 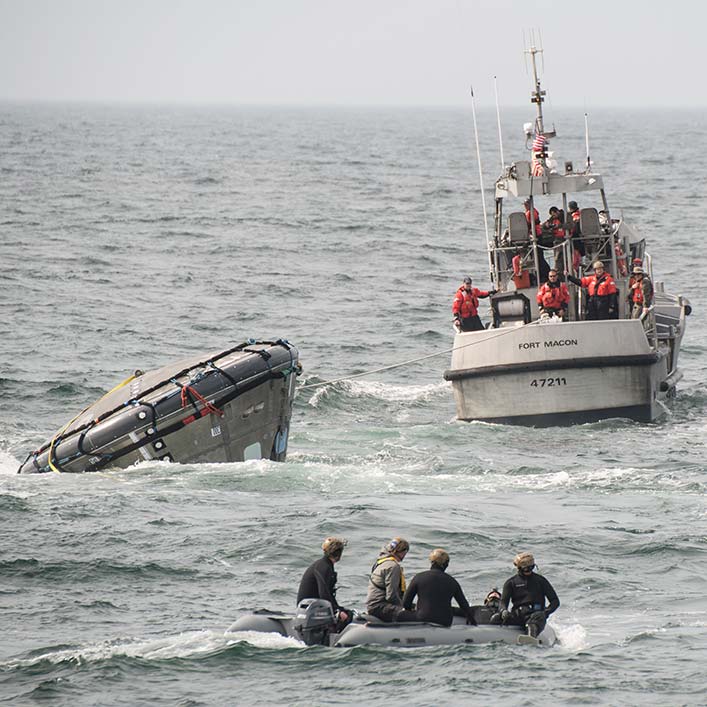 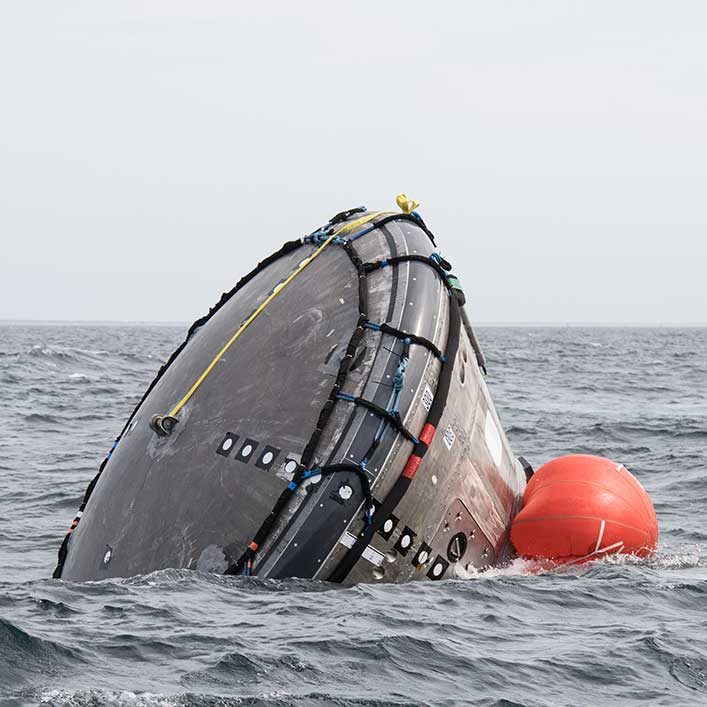 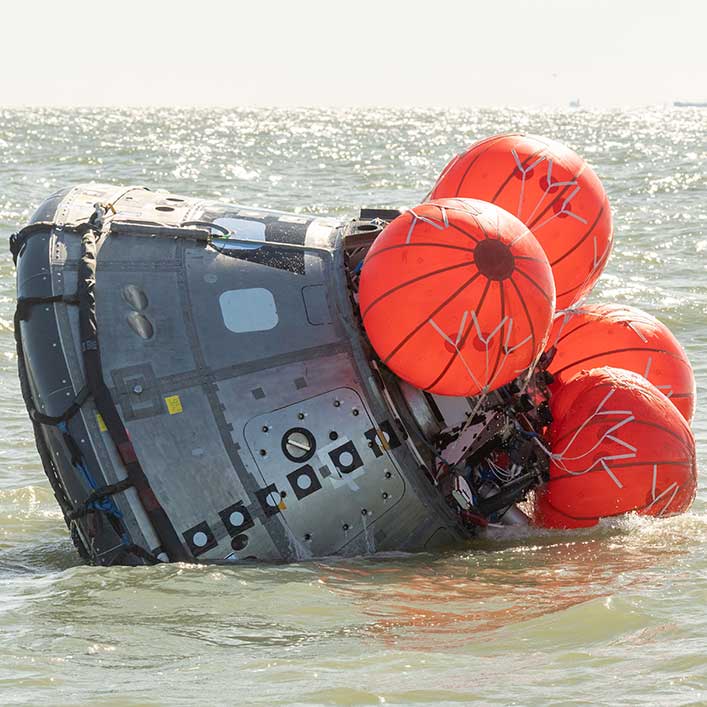 The CMUS is designed to inflate five bags after the Orion spacecraft and its crew splash down upon returning from deep space missions, enabling the capsule to upright itself. Photos by Bill Stafford and Josh Valcarcel, NASA

NASA is far from the only fan of this innovative tool.

Since 2016, there have been nearly 50 papers published in academia and industry about WEC-Sim and its usage, speaking to its popularity. From novel device and PTO modeling to experimental validation and more, WEC-Sim has been employed to model a broad range of devices.

British renewable energy company Marine Power Systems relied on WEC-Sim for modeling its innovative prototype of the WaveSub wave energy generator. According to Marine Power Systems, the five-megawatt device will have a power output similar to that of a substantial offshore wind turbine that is able to power roughly 5,000 homes. WaveSub's uniqueness lies in its PTO system, which delivers the generated electricity to shore via undersea cables like an offshore turbine would do.

The ALETTONE (At Least Energy Thanks To Neptune) wave energy converter is another device that has leveraged the WEC-Sim code in its numerical models. Energy is generated when the ocean moves a floating rocker arm, which is connected to a rotating electric generator. Its simple design makes ALETTONE a strong contender for energy generation in isolated locations.

WEC-Sim helped guide the development of Italian energy company Ente Nazionale Idrocarburi's Inertial Sea Wave Energy Converter (ISWEC), too. The ISWEC is a floating hull that features a pair of gyroscopic systems that are connected to two generators, and the unit is anchored to the ocean floor. As the ocean waves cause the unit to pitch, the gyroscopic devices connected to the generators transform the movement of the waves into electricity.

WEC-Sim Plays Well With Others

WEC-Sim's versatility makes it an advantageous tool for the innovators of tomorrow's renewable energy solutions. The model's applications extend beyond wave energy devices and it can also be joined with other modeling tools, expanding its capabilities and usage.

Though WEC-Sim has been put to the test in several real-life scenarios, validating the model can help to fine-tune its capabilities and improve its accuracy.

The project will validate tools used in the design of offshore wind systems, digging deeper into differences between computer simulations and experimental measurements.

A Part of the Prize-Winning Team

Numbered among its countless applications, WEC-Sim recently played a role in the design of an award-winning ocean observing device, too.

Prior to submitting their innovation to the U.S. Department of Energy's Ocean Observing Prize, the CalWave team refined xNode with the help of WEC-Sim, using the code to validate the power production and loads of their device. Their innovation was so successful, it garnered the Nautilus Grand Prize, the competition's top award.

From barges, buoys, and offshore wind to platforms that power underwater vehicles, WEC-Sim's applications are seemingly bound only by the limits of imagination.