At 30 Years Young, the Future Is Bright for NREL's High-Flux Solar Furnace

With the breakneck speed of innovation at the National Renewable Energy Laboratory (NREL), the laboratory's High-Flux Solar Furnace (HFSF) is all the more remarkable for continuously facilitating envelope-pushing research since 1989.

Like some superhero-comic contraption, the furnace can deliver the heat of 2,500 suns to melt a hole through solid steel in less than a minute. It has been used to destroy toxic waste, create hydrogen fuel from water, and develop nuclear defense applications.

Practically speaking, the 10-kilowatt optical furnace harnesses concentrated sunlight to test high-temperature processes or applications that require high heating rates using solar concentration. It has been used by universities, NREL researchers, private industry, and federal agencies for durable on-sun testing for 30 years. And, tech-obsessed millennial that it is, the HFSF's recent hardware upgrades help keep it continually in demand among researchers. With access to all that Colorado sunshine from the mesa above NREL's campus, the future looks bright for the furnace.

HFSF manager and research engineer Judy Netter looks back with pride and forward with excitement.

During the past 30 years, we've helped scores of industry partners—from hydrogen to aerospace to solar. It's been rewarding to see the impact our research has had in such diverse industries."

To celebrate the HFSF's 30th anniversary, we look back to remember the furnace's beginnings in the Wild West—1989—and to learn about its conception, design, and plethora of award-winning research.

The HFSF was designed and built at NREL—then the Solar Energy Research Institute—to expand the laboratory's research to include concentrated sunlight.

Allan Lewandowski, former senior engineer, NREL: "When we decided to build the furnace, we wanted to make it unique and not just duplicate what other folks had done. So, one of the things I started looking into was non-imaging optics, which can allow for very high concentrations of sunlight or other sources of light. One requirement is that you need a larger ratio of focal length to diameter—or f/D—for your primary concentrator to take full advantage of secondary optics—in our case, mostly reflective devices. If you have a primary concentrator with a smaller, and more typical, f/D, then you can achieve high peak concentrations, but that concentration degrades rapidly as you move the focal point off axis. However, if you have a larger f/D, the degradation is less of an issue. This means you can go more and more off-axis and still achieve significant concentrations.

"The off-axis design was a unique feature of the solar furnace. I'm not aware of any other furnace that did it this way at the time. So, a benefit was that none of the light that hits the concentrator is shaded. For all the support systems that go around any given experiment, we didn't need to worry about how big they were. No light coming from behind the experiment would hit the hardware. 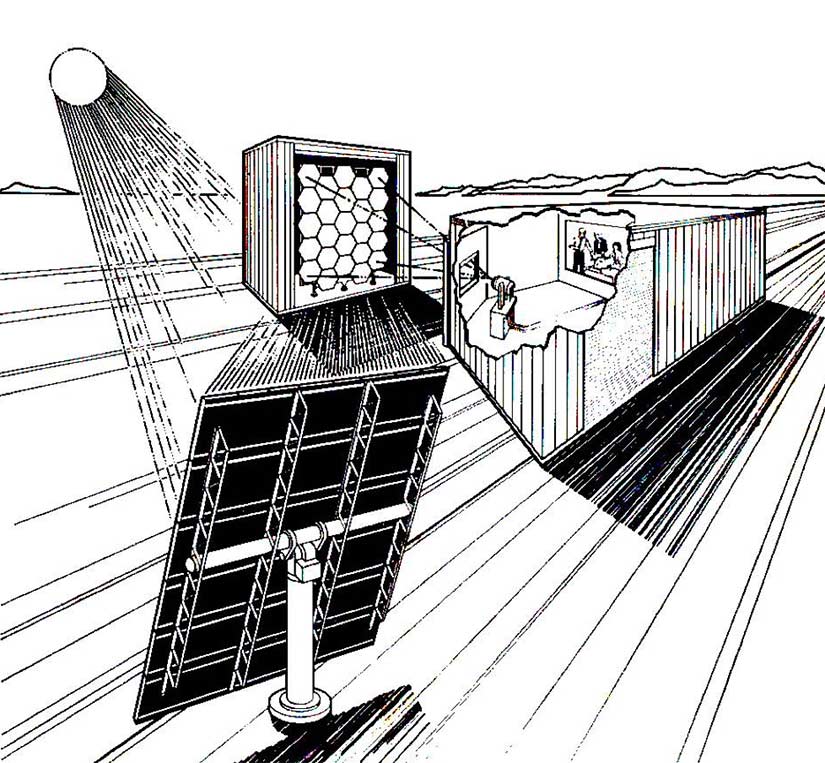 An early illustration shows the furnace's unique off-axis design, where sunlight reflects off a heliostat to a concentrator, and then to the experiment, at angles that eliminate shadow and allow for longer focal lengths. Image from NREL

"Off-axis design also allowed us to set the focal point of the system to be a convenient working height for scientists, rather than having to use a small tower for support and access.

"The pedestal, drive, structure, and controls were 'donated' by Lockheed from its stock of parts at its Littleton plant. Lockheed built the original heliostats for the Solar One CSP project in California and this hardware was part of that production. We had a connection through folks who worked there and then moved over to NREL."

Carl Bingham, former HFSF engineer, NREL: "The off-axis, long focal length to diameter ratio design was tailored for the use of secondary concentrators. Our ultimate purpose was to investigate the applications of very high solar concentrations from 2,000 to 46,000 suns. The advantage of a solar furnace is that we could produce high heating rates, able to reach about 2,500 degrees Celsius in a fraction of a second.

"I controlled the furnace and took measurements. Al Lewandowski did the design. I was working in the Buildings group at the time and it sounded like an interesting project. It turned out to be very interesting because we had hundreds of experiments go through there. It wasn't just one long-term project—we were trying to prove what you could do with concentrated sunlight."

In the 30 years of furnace operation, the HFSF has seen hundreds of tests planned and performed with customers and staff from multiple disciplines. It has been involved in R&D 100 Award-winning research, product development, and patent licenses.

Alan Weimer, professor of chemical engineering, University of Colorado-Boulder (CU): "I started using the HFSF around 1996 when I started at CU. My first grant was a subcontract from NREL to look at high-temperature material synthesis—it was a little $10,000 seed grant. We did some carbothermal reduction chemistry. It wasn't very significant; it didn't work very well, but it did establish our relationship with Al [Lewandowski] and Carl [Bingham]. That led to over 20 years of joint NREL-CU research at the HFSF. For example, we were funded by the DOE EERE Hydrogen program to basically 'crack' or decarbonize natural gas—to split methane into carbon black and hydrogen.

"We also built a solar reactor on a skid here at CU. It was very well instrumented for temperature and heat flows. We took it to NREL, placed it in the HFSF facility, and ran experiments there to demonstrate some of our water-splitting chemistries.

"In our most recent work with Judy Netter, we demonstrated the continuous production of hydrogen by splitting water on-sun at the furnace by using oxidation-reduction reactions—some pretty significant work."

If you're demonstrating real on-sun operation, you have to use a real high-flux solar furnace."

Carl Bingham: "We had an early project to investigate advanced materials and were allowed to propose which ideas were the most promising. [Former NREL researcher] Roland Pitts designed a vacuum chamber with a quartz window to admit the concentrated 2500-suns sunlight. Along with Clark Fields, a chemistry professor at the University of Northern Colorado, we investigated superconductor materials, diamond thin films, stainless-steel cladding, and tungsten-carbide synthesis.

"We were testing glazings for solar collectors, back when solar collectors were a big thing. Many times, the glazing would cloud up because of the ultraviolet exposure and it would need to be replaced. So, we were testing different types of plastics with a more concentrated ultraviolet light to determine their service life. That was the basis of the 2009 R&D 100 award for the Ultra-Accelerated Weathering System."

As a graduate student under Al Weimer, I was involved in testing solar receivers at the HFSF. The solar furnace provided a unique and user-friendly opportunity to obtain valuable experimental data necessary to validate our models on a small scale."

Judy Netter: "The proof of concept for the Ultra-Accelerated Weathering System was performed using the HFSF and one of the specialized ultraviolet mirrors in place to reflect the light onto the samples. We received a patent for that process. From there, two different ultraviolet concentrating dishes were developed, with the second one receiving the R&D 100 award."

Carl Bingham: "We developed the Ultra-Accelerated Weathering System with a group of Russian scientists who had previously been working on nuclear weapons research as part of an international proliferation prevention program."

Greg Glatzmaier, chemical engineering researcher, NREL: "My early solar furnace research involved treating and breaking down a set of hazardous chemicals called dioxins, using a combination of sunlight and high temperatures of about 1,100 degrees Celsius. When we started that work, the furnace didn't exist—I was going down to White Sands missile range near Las Cruces, New Mexico, because they had a solar furnace that we contracted to use. Because of the success of early tests there, DOE recognized that there were different things you could do with sunlight besides generate electricity. And that was part of the motivation for getting the HFSF built."

Zhiwen Ma, mechanical engineering researcher, NREL: "I've used the Solar Furnace in developing a particle receiver as part of the DOE SunShot Initiative. It helped to verify the effectiveness of our design mechanism in terms of the need for solar flux distribution across the surface of the receiver.

"In a second project, we partnered with students at the Colorado School of Mines to study thermochemical energy storage. We designed and tested a solar thermochemical receiver-reactor to heat thermochemical particles as a means of storing solar energy."

NREL High-Flux Solar Furnace research has led to patents including:

Emily Warren, semiconductor engineering researcher, NREL: "We used the HFSF to develop materials for solar thermoelectric generators, or STEGs, as part of an Advanced Research Projects Agency–Energy-funded project. A STEG is a solid-state heat engine that can convert sunlight directly into electricity through the thermoelectric effect. This project—High-Temperature, High-Efficiency Solar Thermoelectric Generators—was a collaboration between NREL, Colorado School of Mines, and the Jet Propulsion Laboratory. We tested selective absorbers and thermoelectric components using a custom-built, on-sun, vacuum chamber and beam-shaping optics to enable testing of materials at 1,000 degrees Celsius."

A Sunny Outlook for Current and Future Research

The HFSF facilitates a variety of research, including NREL's involvement in the DOE HydroGEN project, where the furnace is used for water splitting at 1,300 degrees Celsius to produce hydrogen for power production.

As a DOE User Facility, the HFSF is available for testing by universities, businesses, the Department of Energy, Department of Defense, national laboratories, and other partners.

Does your team have its own bright idea for the furnace? View detailed furnace specifications, discuss potential new applications, or arrange a technical service agreement by contacting Judy Netter.