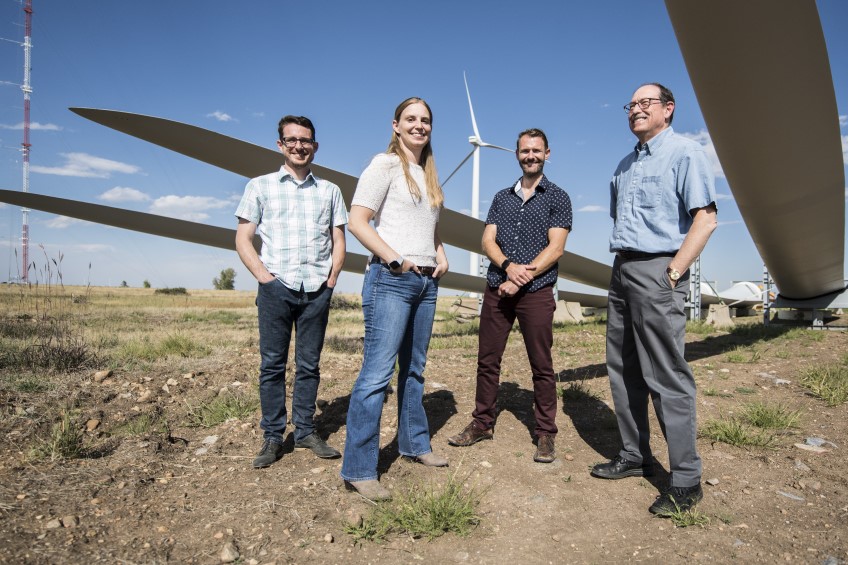 Tending cows on a Wisconsin dairy farm taught Paul Veers the value of hard work—and also that he didn’t want to be a farmer.

“The routine starts at 6 a.m. and ends at 8 p.m., seven days a week,” said the newly appointed research fellow at the U.S. Department of Energy’s National Renewable Energy Laboratory (NREL).

As Veers was finishing his bachelor’s degree, his father offered him a chance to take over the 160-acre farm, saying he’d keep the 35 cows around until his son decided. “I thought about it for a millisecond,” Veers laughed. “I said, ‘Go ahead and sell the herd. I’m going elsewhere.’”

After studying engineering mechanics at the University of Wisconsin (a degree that, he says, “allows me to not do anything practical whatsoever—it’s really fundamental, the mechanics of engineering”), he earned his Ph.D. from Stanford University.

In 1980, a rural connection helped launch his career in science and wind energy research when Veers interviewed for his first job in operations at Sandia National Laboratories in New Mexico. He met with “an old Tennessee farmer” who was impressed with Veers’ background. “He knew that on a farm, when the machinery breaks, the farmer had to get out there and fix it. There’s nothing else you can do.”

Yet Veers’ experience was different.

“My family wasn’t very mechanical,” Veers admitted. “I got the job under false pretenses” because his family relied on a friend who had a garage who could fix machines much more quickly.

Nonetheless, Veers joined Sandia’s applied mechanics department, which consulted on projects across the laboratory. While he worked on a large assortment of technologies that included nuclear reactors, he also encountered wind turbines.

His future career took off. “Wind energy was hands down the most interesting,” he said. “The field was wide open.”

Back in the early 1980s, the question was: Why are these machines breaking, and how do we figure out how to build them so they don’t break? “No one really knew how to do that,” Veers said. “That’s what drew me in.”

The Turbulent World of Wind

Heading into the field of wind energy for a career wasn’t exactly a safe choice at the time. Veers recalled that, early on at Sandia, he was introduced to a senior staffer in nuclear weapons research at a cocktail party. “He asked me what I was focused on, and I said wind energy,” Veers said. The would-be mentor paused a moment, then said, “Oh, that is truly, truly trivial. You ought to find something worthwhile. That is never going to turn into anything.”

Doubters did not deflect him. Veers persevered in the wild days of wind, when researchers did “dangerous stuff” with these balky new machines. And when federal funding became iffy for renewable energy development, he stayed put even as managers suggested staffers look elsewhere for secure jobs.

“I wasn’t bright enough to realize this could be a problem,” he said. Still, he was not convinced that wind energy was the solution.

“I really did not know if wind would become a major player,” Veers said. “I did not have a passion. Originally, I thought wind energy was an amazingly interesting problem to solve.”

Gradually, his viewpoint shifted. “The more I learned, the more I thought this could work,” he said. “This could make a difference.”

At that time, the general vision was that someday wind power might provide 5% of U.S. electricity. “Wouldn’t that be a wonderful success?” he recalled thinking. Now, it’s surpassed that figure and keeps climbing.

“Our sense is we’re going to hit 10% easily,” Veers said. “The goal is 50%. We now have the vision, if we keep pushing the frontiers with the technology, that it is going to increase to 20% or 30% globally.”

For Veers, it is “amazingly satisfying to see that this work we’re doing is paying off.”

While based at Sandia, Veers had frequent contacts with NREL. “I worked with NREL from day one,” he said.

Early on, he established himself as an expert in vertical-axis wind turbines (VAWTs) and wind inflow analytical modeling tools. Sandia operated one of the largest research VAWTs in the world, and Veers was one of the lead research engineers in that program.

Still, Veers did make a trip up to NREL’s Flatirons Campus to check on the one vertical axis wind turbine located there.

Also while at Sandia, he investigated wind turbine fatigue because he realized the assumptions regarding turbulence were inadequate. As a result, Veers developed one of the first analytical tools that modeled upwind flow characteristics. He also contributed to wind turbine system design tools that predict aerodynamic and structural dynamic performance.

The system to simulate turbulence can be applied to wind turbine computational models, an approach often referred to as the “Veers Method.” Variations of it are still in use today.

Aside from his technical talents, colleagues and peers value Veers’ communication skills.

“Paul has the uncanny ability to understand the physics of wind energy across many scientific disciplines and communicate the complexities to non-experts in writing and in words,” Smith said. “This skill set is truly unique in the world and extremely valuable.”

Take his explanation of a wind turbine for example: “It is a big piece of machinery that takes energy in one form and makes electricity.”

For a variety of reasons, Veers impressed many at NREL early on. NREL Fellow Bob Thresher met Veers at a wind turbine dynamics workshop in 1984. “Even then, as a young researcher working at Sandia, he stood out as a clear and careful thinker with great ideas to drive wind energy research forward,” Thresher said.

“Over the years, Paul has tirelessly worked across the national laboratory complex,  contributing to the advancement of wind energy science and technology development,” he added.

Veers made it a point to reach out. “I was trying to make the other labs successful,” he said. “Unless we do that together, we’re not going to have a mission that’s fruitful.”

With his ability to network, as well as his connections to NREL, it was only a matter of time before he headed north to Colorado.

An Innate Affinity for NREL

When NREL’s chief engineer position opened up in 2010, Veers jumped at the chance. United with old friends such as Thresher and Smith, as well as Sue Hock and Mike Robinson, Veers was set to join an established group. In his view, a major draw was, and is, NREL’s close-knit wind energy workforce.

“We all have to work together to make something that’s useful,” he said. “That’s often why this group is like a family. The teamwork that goes on here is really exceptional.”

Veers tackles leadership roles. He represents NREL on DOE’s Atmosphere to Electrons (A2e) Executive Management Committee. And for 12 years he was chief editor for Wind Energy, an international journal for progress and applications in wind power.

Recently, he was the lead author of a Science article analyzing three challenges to wind energy potential. It followed NREL convening more than 70 wind experts representing 15 countries in 2017 to discuss a future electricity system where wind could serve the global demand for clean energy.

“People think that because wind turbines have worked for decades there’s no room for improvement. And yet, there’s so much more to be done,” Veers said. “We distilled all the information into three big things connected to wind energy: the atmosphere, the machine, and the grid and [wind farm] plant.”

The possible upside of such innovation is clear.

“Addressing these challenges by taking an interdisciplinary wind energy science and engineering approach will lead to solutions that advance the state of the art in wind plant energy output,” said article co-author and NREL Associate Laboratory Director for Mechanical and Thermal Engineering Sciences Johney Green.

For Veers, the challenge is real. It keeps him showing up for work—although he also jokes that the fact that he and his wife Karen have four daughters born over a span of five years is also an incentive to keep his job.

Veers remains modest about his achievements. “I have many faults. I’m not very outgoing, and sometimes not very articulate,” he said. His colleagues back him up. Smith joked that Veers had an unbroken record of beginning presentations with a joke—that falls flat.

Whatever his attributes, Veers believes the key to success is the team. “It is an attitude that attracted me to NREL and this wind group in the first place,” he said. “That attitude is where the mission is much more important than personal glory or success.”

For Veers, choosing wind farms over dairy farms provided the best harvest of his talents.