Little Uncertainty Remains at NREL, Thanks to Improvements in PV Performance Measurement

The solar industry wants certainty, not approximations, because a lot rides on the separation of exact from merely close. Uncertainty, or margin of error, can cost a solar module manufacturer millions of dollars.

For the past four years, NREL has prioritized improvements to its methods for measuring PV module efficiency. Vital to that effort was significantly reducing uncertainties. Now NREL stands out globally as the laboratory with the lowest uncertainty rate when it comes to measuring the power of a PV module, at plus or minus 1.1%. 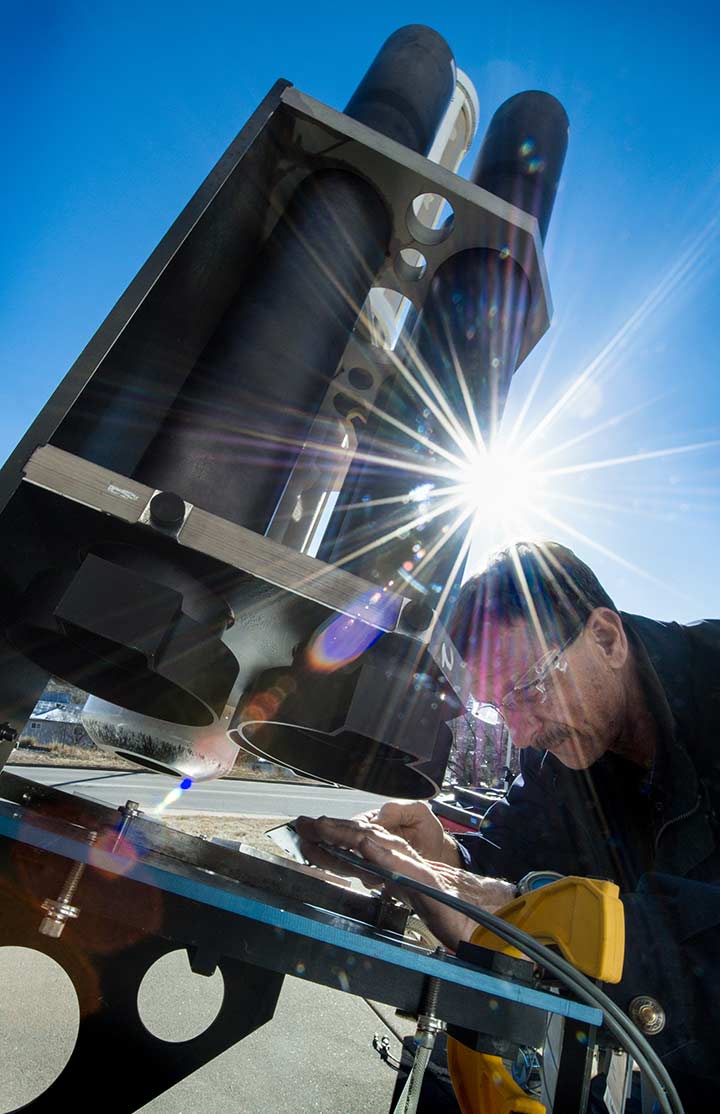 "Manufacturers need some kind of yardstick at the end of their production line because they're cranking out thousands of modules a day," said Dean Levi, Emery's successor and manager of the Cell and Module Performance group in the National Center for Photovoltaics at NREL.

Manufacturers price PV modules based on watts generated and typically provide a power tolerance of -0% to +3%. Take a 300-watt solar module—which sells for 30 cents per watt on the global wholesale market. That margin of error for this module equates to 9 watts.

Although that only amounts to $1.80 more per module, large PV manufacturers produce more than 30 million 300-watt modules per year, so this small reduction in uncertainty can result in a $50 million improvement in annual revenues.

Including NREL, four laboratories dominate in providing the most exact measurements of PV cells and modules. The others are in Germany, Italy, and Japan. Each country relies on a certifying agency to ensure exacting standards are met. In the United States, the American Association for Laboratory Accreditation (A2LA) serves that function. A2LA has certified NREL's uncertainties for primary reference cells (0.4%), secondary reference cells (0.6%), and the previously mentioned reference modules (1.1%).

"With each of these, we became the lowest uncertainty in the world when we attained those accreditations," Levi said. "We're lower than any of the other laboratories." The uncertainty for reference modules at the other labs ranges from 1.3–1.6%.

Modules, which typically are made up of either 60 or 72 connected solar cells, undergo rigorous testing before reaching the market. Private test laboratories shoot ice balls at them to make sure they're hail-resistant, expose them to repeated wide swings in temperature and humidity, mechanically stress them, and measure their energy output versus temperature and irradiance.

But handling what's called a "golden module" requires expertise only found at NREL.

To ensure proper calibration, manufacturers usually send at least two modules of the same model type to NREL's South Table Mountain Campus in Golden, Colorado. There, the output performance of each is measured and the laboratory certifies that the module produces, for example, 302 watts, plus or minus 1.1%. Back at the factory, the modules are used to check that output against the company's solar simulator, which is essentially a large table that illuminates the module with light approximating sunlight.

"One of the biggest uncertainties in measuring power output is how accurately can you measure the light output of your simulator," Levi said. "With this golden module, the manufacturer can set the light output of their simulator very accurately. Then they put that module in a safe place and they get out another module, just like the first one. They measure that module on the simulator and that's their ‘silver module.' That one they'll use every morning, or maybe several times a day, to set the intensity of their simulator."

NREL calibrated over 800 modules for internal and external customers in Fiscal Year (FY) 2018.

NREL has served as a resource for industry since 1980, when the laboratory (then known as the Solar Energy Research Institute) took over measuring solar technology from NASA. Emery, who led that program for 37 years, said the margin of error for modules at that time was 10%.

In 2015, when the uncertainty rate hovered around 3%, DOE (which provides most of the funding for NREL's work), set a goal for the laboratory to reduce its uncertainty level to below 2% by the end of FY 2018. Emery said the direction given to NREL was clear: "We want you to be as accurate as possible."

"We took that seriously and devoted significant labor resources to it," Emery added.

He and Levi give credit to Carl Osterwald (an NREL electrical engineer) and Larry Ottoson (a technician at the laboratory's Outdoor Test Facility) for enabling NREL to reduce the margin of error beyond the DOE goal. The duo worked to eliminate anything that was causing errors in the calibrations.

To calibrate modules, NREL relies on three different test beds: a continuous solar simulator, a pulsed solar simulator, and one outdoors using natural sunlight. Ottoson dedicated himself to improving the equipment—eliminating light leaks, for example, that could skew the results.

"Not any one of our systems by itself could get better than 2%," Osterwald said. "So, we had to use a combination method. It was a combination of a whole bunch of things. We completely changed the calibration procedure for PV modules."

One change considered the fact that light from a simulator isn't uniform, something that can dominate the uncertainty. In the new procedure, the current produced by a module is first calibrated outdoors, which provides a very uniform light source. Then, that carefully calibrated module can be used as its own reference module for the other tests. After the current is measured outdoors, the module is put into a simulator and the light level is set correctly.

NREL coined the term "module self-reference," or MSR, to refer to how a test module serves as its own reference. Instead of purchasing an expensive new simulator to calibrate modules, NREL's MSR takes advantage of the strengths of the three test beds.

"There's only one laboratory that does our procedure, and that's us," Osterwald said. "Other laboratories have their own way of doing things. They're different. We've just improved what we were doing before."

Around 2008, when PV modules were selling for $5 a watt, a flood of startup companies were sending their modules to NREL for measurement. "We were probably doing a volume five times what we do now," Levi said.

With prices now around 30 cents a watt, the financial underpinning of startups has collapsed and the demand for measurements has lessened. But providing as exact a measurement as possible remains important—especially for the banking sector.

"A lot of the PV power we get is from huge utility-scale power plants they build out in the desert or out in the plains," Levi said. "Most of those are financed by banks, and banks don't like risk. If a bank perceives more risk in a project, they're going to charge a higher interest rate. And that interest rate directly impacts the cost of the power that project produces."

"If the banks have a higher confidence in the energy output, then they're going to charge a lower interest rate," Levi continued. "That's one of the major factors that DOE has identified as a pathway to reduce the cost of solar energy: To reduce the perceived risk by the investors."