From the Bottom Up: Designing a Decentralized Power System

Cross-Discipline Team Envisions the Grid of the Future

A far-reaching vision for the future of the electric grid is emerging at the U.S. Department of Energy's (DOE's) National Renewable Energy Laboratory.

In the past few years, this vision has grown from a theory on whiteboards to real-power experiments on lab hardware.

It's called "Autonomous Energy Grids" (AEG), an effort to ensure the grid of the future can manage a growing base of intelligent energy devices, variable renewable energy, and advanced controls.

"The future grid will be much more distributed and too complex to control with today’s techniques and technologies," said Benjamin Kroposki, director of NREL's Power Systems Engineering Center. "We need a path to get there—to reach the potential of all these new technologies integrating into the power system."

The AEG effort envisions a self-driving power system—a very "aware" network of technologies and distributed controls that work together to efficiently match bi-directional energy supply to energy demand. This is a hard pivot from today’s system, in which centralized control is used to manage one-way electricity flows to consumers along power lines that spoke out from central generators.

Instead, AEG grids are composed within one another, like a fractalized group of microgrids. Sections, or "cells" of AEG use pervasive communication and controllability to continually pursue their best operating conditions, which adjust to the temperament of customer demand, available generation, and pricing.

Decentralized control solves a few challenges for our changing grid. Billions of new energy devices generating energy from variable resources are difficult to manage centrally—the problem is too complex. Beyond the technical hurdles, our grids also need a new paradigm for resilience, protecting against natural disasters and cyberattacks.

AEG uses the resources we have (and a few on the way) to create the most resilient and economic grid possible. At the moment, AEG is a highly theoretical framework for our future energy systems to build from, with potential application 10 years out and only a few early adopters currently trialing the technology. But it's building toward a very concrete future.

That's because the NREL team started by building a solid foundation: the theory behind AEG.

Filling Gaps in the Literature 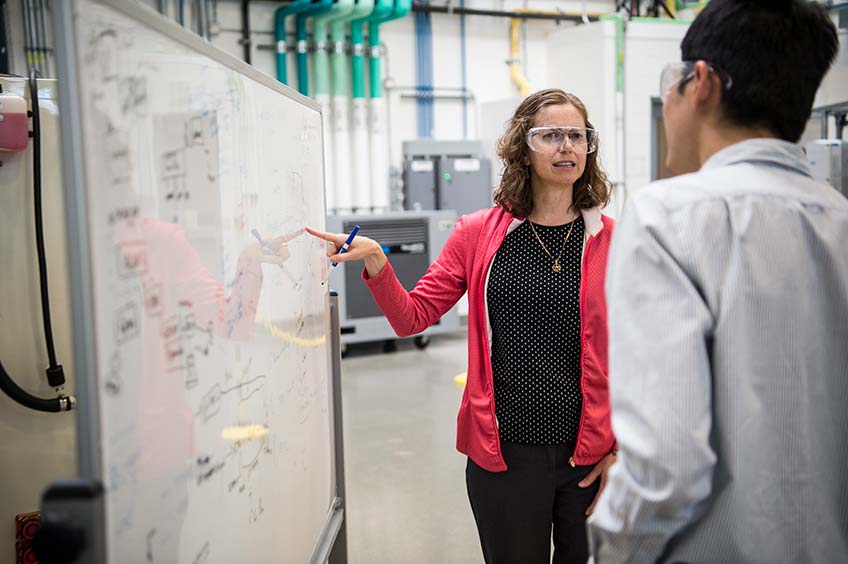 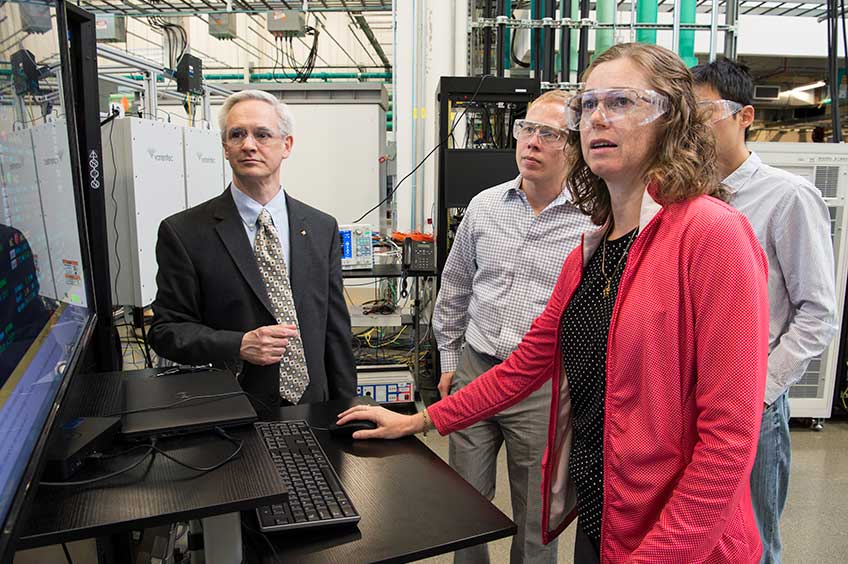 "I would say for us, it all started with NODES," said Senior Researcher and AEG Technical Lead Andrey Bernstein. "In terms of algorithms and framework, NODES covers just one cell—one bounded community. Then Ben had this idea of having cells that communicate with each other to form a hierarchical system that could cover the entire grid. That's how it went to the multicell perspective."

With the launch of NODES in 2015, Bernstein and fellow NREL Researcher Emiliano Dall'Anese set their sights on new algorithms for a distributed grid. These algorithms use the limited computation of many customer devices (e.g., inverters) to functionally run the grid.

"Our main algorithms are coming from optimization and control theory," said Bernstein. "If you go to the literature, there's a gap between the two: Optimization finds solutions (but ignores real-world conditions) while control algorithms work to stabilize in not-ideal conditions. We're bridging the two domains."

Bernstein and Dall'Anese have been prolific in their publishing on this topic, building the theoretic scaffolding for this new discipline in their Real-Time Feedback-Based Optimization of Distribution Grids: A Unified Approach and Online Optimization as a Feedback Controller: Stability and Tracking papers. The successive challenges they face are predominated by a few rigid facts. For example, power flow is continuous, while measurements are not; and smart homes and photovoltaic inverters aren't supercomputers that can solve complex optimization problems.

"What's novel in our solution is that we address a two-part problem," said Kroposki. "First, because of the large number of devices, we cannot use central control, but must instead distribute the optimization problem. The other problem is that we have time-varying conditions, therefore the optimization is changing every second and must be solved in real time."

NREL's legacy in this domain has been helpful in seeing a pathway to real-world implementation. In California and Hawaii—two states that would benefit from AEGs—NREL has helped troubleshoot a dozen problems related to customer-sited inverters, advancing their state of the art along the way. What happens, for example, when the rotating generators that balance frequency at 60 (or 50) Hz are decommissioned? Methods developed for Hawaii and later used in California helped answer this question by adding smart-grid functionality to the inverters to enhance stability.

Other challenges remain, such as identifying the complete set of inverter functions required to help stabilize the grid, as well as the necessary incentives.

At a theoretical level, AEG stitches these developments together—along with NREL expertise in control technology development, microgrid and distribution system controls, and cybersecurity—into a larger, more complete theory. The expanding AEG community, which convened in April during a workshop at NREL, is focusing on understanding all the parts of the puzzle and solving for gaps. But while the AEG algorithms are still in the shop, the team is pulling in partners across industry and energy sectors to see how AEG looks in application.

Like the grid that the team is optimizing, distributed "cells" of support are appearing for AEG. Within the laboratory, a circle of AEG contributors is expanding thanks to NREL-directed funding for exploratory research projects. As the project's principal investigator, Kroposki wants to keep the ball rolling in other energy domains while the theorists continue to piece together the program's skeleton.

One of these domains is wind energy, in which an AEG-future also presumes an autonomous wind farm. Jennifer King is a researcher at NREL who has spent the past year constructing the wind slice of AEG.

"It's one of my favorite projects by far," said King. "It's a nice mix of applied research, but we still get to work at the fundamental, technical level."

King's work is helping to build the foundation of AEG—crafting optimization problems to self-regulate cells the size of wind farms. But her research also concerns optimally integrating the variable supply of wind energy.

"The techniques and the communication across technologies just don't exist today," said King. "One thought is that buildings can shift their load to try and match (the variable output of wind), so we're working with the buildings team to understand how."

By incorporating these complex systems, AEG is guiding their respective progress toward a unified solution for the grid. But in doing so, AEG is also opening a Pandora's box of technical challenges. "The more we dig in, the more topics we find that need to be addressed," said Kroposki.

Among them is scale. The team is currently simulating AEGs with a few hundred nodes on the high-performance computer housed at NREL's Energy Systems Integration Facility. But regions such as the Bay Area have more than 20 million control points. How would an AEG perform if deployed there? And what market incentives will it take to get there?

Trying to decide the fate of a million things on a second-by-second basis is where the challenge comes in."

From Foundations to Functional

Put succinctly by King, "Algorithm solve times are needed every one second. Trying to decide the fate of a million things on a second-by-second basis is where the challenge comes in."

Furthermore, stepping out of the theoretical world, real power systems pose real problems. Communications are delayed, grid devices come from many vendors, and data isn't always available where it's needed. This is a special challenge for Bernstein and team, whose algorithms must be robust despite not-so-ideal conditions.

"Let's say we produce very nice algorithms," said Bernstein. "They still depend on physics—the topology of the lines and models of the devices. If you're in a building and you want to choose what to turn on or off, you need to have an accurate model of that building, which can be difficult to find."

To overcome peculiarities such as device models, Bernstein is wielding big data and tools from machine learning.

"Sometimes, defining the model is harder than learning how to be optimal from data and measurements," said Bernstein. "Instead of building the models, we're using data to learn the optimal behavior directly."

Still other conditions are limiting AEG; there are hanging questions about how to arrange the communications infrastructure, and critically, how to secure that future infrastructure from cyberthreats. Such practical questions will be the focus as AEG takes a real-world form.

The Road to Market Endorsement

While Kroposki predicts a 10-year effort, an AEG market arrival may come sooner. There's already progress toward commercialization of AEG algorithms. The theory that Bernstein and Dall'Anese constructed to power AEG was selected by DOE's I-Corps program for advancement to market. The IP Group also picked AEG as a candidate for its tech-acceleration portfolio.

Industry is stepping behind the vision, too. Siemens is partnering with NREL to develop distributed control techniques with support from DOE's Solar Energy Technologies Office. Likewise, NREL's collaborative work with Eaton is drawing from the AEG effort for autonomous, electrified mobility solutions.

Of all places, the first real-world test of AEG algorithms is happening at a Sonoma vineyard. The Stone Edge Farm Estate's microgrid was programmed for distributed control using the theory originally developed by Bernstein and Dall'Anese.

As the theory progresses—from foundations, to simulation, to small-scale application—Kroposki hopes that participation will grow, too.

"There are many people out there working on tiny aspects of this… we see this as a broad vision. If you're interested in this work, please get ahold of us."