As a young boy in Juarez, Mexico, Ismael Mendoza didn't spend much time contemplating his future. "I never thought I'd leave my town," he said.

He figured that maybe he'd be a mechanic like his father, or perhaps an electrician. Instead, he became an engineer, and now works at the U.S. Department of Energy’s National Renewable Energy Laboratory (NREL). Along the way, he developed a passion for encouraging other Hispanic students to consider the sciences—and being of service to the cause of empowerment.

Over the years, Mendoza has volunteered to speak at middle schools, telling Hispanic students they have options in different types of engineering—chemical, electrical, and mechanical.

"They say they want to be a mechanic or an electrician, and I tell them, “You can become a mechanical engineer and define cars and engines instead of just fixing them,’” he said. “It opens up their perspectives."

He’s since connected with several younger students who are now pursuing engineering, "whereas before, the possibility never crossed their minds," he said.

The latest chapter of that effort began earlier this year, when Mendoza took the lead for NREL’s newly formed Hispanic and Latinx Alliance (HLA) Employee Resource Group. On Sept. 16, he hosted one of the first HLA meetings, the date symbolically aligning with National Hispanic Heritage Month (Sept. 15–Oct. 15).

From Tinkering to Building the Future

Mendoza himself benefited from such encouragement early in his development. As a curious 7-year-old, Mendoza was fascinated by how things worked—which was why he disassembled electronic devices. He left some gizmos, like the family TV remote, unusable.

"As a kid, you don't really know where all the parts will go," he said.

But even though his mother and father asked him to stop, he could not help himself—he simply loved tinkering. By the time he was in Bowie High School in El Paso, Texas—across the border from Juarez— his physics teacher encouraged him to aim high in his career.

Shortly after, the director of the Minority Engineer Program at Colorado School of Mines visited Mendoza’s school. The teen was intrigued by the opportunity, and in 1998, he arrived as a Mines freshman and immediately joined the Society of Hispanic Professional Engineers to establish a base.

After graduation in 2003, Mendoza worked in variety of engineering jobs but always kept his eye on NREL. A Science Bowl hosted by NREL planted the seed of his future work at the laboratory.

"I believe in the mission of what NREL does—focusing on our energy future—and wanted to be part of that," he said.

In 2010, following two years at an engineering firm designing substations for wind farms in Wyoming, he joined NREL as a field test engineer. His duties included helping test wind turbines at the laboratory’s Flatirons Campus to ensure they comply with different International Electrotechnical Commission standards.

"We did all the instrumentation as a third party for power and wind measurement, from small all the way to utility-scale wind turbines,” he said, adding that they often climbed 90 meters into the sky—where things can get tricky. "Sometimes we’d have gusts that would shake the turbine. You have to get your sea legs."

Long before the formation of NREL’s HLA, Mendoza and others were already finding common cultural bonds. NREL researcher Julieta Giraldez had organized an informal gathering of Spanish speakers.

“I started it probably five or six years ago because I missed speaking Spanish,” said Giraldez, “but also because I met a lot of non-Hispanics (mostly Americans) at work who had lived in Spain or Latin America and who spoke very good Spanish and wanted to practice. I realized that it was a great community of very nice people to hang with—Latino and non-Latino.”

That informal gathering provided the foundation for the HLA.

“I am really happy Ismael is taking the lead in formalizing a resource group,” Giraldez said. “Ultimately, I think there is a lot to do in community involvement. Minority groups are very important to help connect people, as well as to expand our experience to the community—especially to younger people seeking role models.”

Mendoza cited NREL’s June 2017 hiring of Associate Laboratory Director for Energy Systems Integration Juan Torres as a key moment in the laboratory’s evolution. “I could see the direction the lab was heading—diversity and inclusion is part of any good organization moving forward,” Mendoza said.

As executive sponsor of the HLA, Torres addressed around 30 staff members at the group’s Sept. 16 meeting, introducing Mendoza as its leader. During his talk, Torres noted that while Hispanic Heritage Month is often overlooked, NREL and other organizations should be focusing more than ever on underrepresented minorities to increase the diversity of the talent pool—which ultimately leads to increased innovation.

According to the National Science Foundation, doctoral degrees among traditionally underrepresented minorities are still low, but are on the rise. For the 10 years between 2005 and 2015, the overall proportion of doctorate degrees awarded to people of Hispanic or Latinx heritage grew from 5.1% to 7.0%. For Mendoza and others, it makes sense to reach out to members of these groups to show that they are valued in NREL’s community.

“We can leverage the relationships we already have with colleges here—and build the pipeline for recruitment” of Hispanics and others, Mendoza said. As Hispanic representation and support structures increase within the laboratory, the more NREL can do to both retain and attract staff. “It’s a breath of fresh air to hear that NREL is supporting these organizations.” 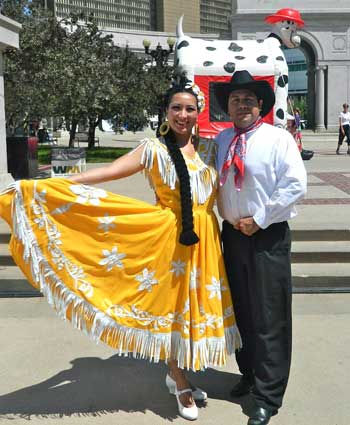 About four years ago, Mendoza began an effort at NREL’s Energy Systems Integration Facility (ESIF), working to help set up virtual connections between NREL’s test turbines and ESIF equipment. His experience is key in this new avenue of research, combining technical skills and understanding of how distributed energy resources can increase resilience and flexibility for the power grid. It also enables him to connect in other ways.

“We partner with different organizations,” he said. “We run co-simulations with others from all over the world, including Colombia and Mexico.”

Mendoza also was part of an effort by NREL Project Leader Riccardo Bracho two years ago to help Mexico create a road map for energy reform.

Mendoza enjoys visiting his native country—and keeps those traditions alive here in the United States. In his free time, he and his wife Yuliana—whom he met at Mines and who also is an engineer—dance with Semblanzas de Mexico ("Memories of Mexico"), performing authentic Mariachi-style dances. These days, however, their time is usually occupied by taking their daughters, 10-year-old Xitlali (whose name means "star" in the Mayan language) and 4-year-old Dalila, to their own dance classes.

Looking ahead, he hopes NREL’s HLA group will continue to build cultural awareness—and he plans to work with other NREL employee groups to increase diversity. As for his parents—they are very proud of their son’s accomplishments.

"All my tinkering really paid off—and they're happy," he said.

NREL believes that fostering an inclusive work environment maximizes the unique talents and innovative ideas of every employee. Learn more about the laboratory’s commitment to inclusion and diversity.