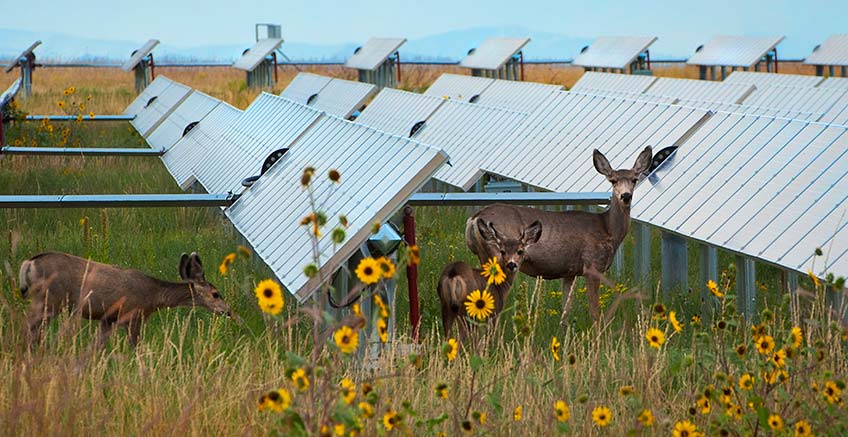 Deer graze by a solar array on the NREL campus.

Late afternoon is not necessarily the best time to see wildlife on the campus of the U.S. Department of Energy's National Renewable Energy Laboratory (NREL)—yet wherever he goes, Tom Ryon can't avoid interactions with nature. Nor does he want to.

In the span of about 10 minutes one typical day, he learned that there's a woodpecker issue at one building on campus, and a bird's nest inside a light socket at another. Then his phone rang—workers moving an old water tank have discovered a salamander. A passing campus shuttle driver leaned out a window and shouted, "Why are there ants?" NREL's senior wildlife biologist laughed.

"We get all kinds of questions," he said. "Every day, the phone rings, and it's something different. That's a good part of the job. Sometimes I have to think about the answer—or use our resources to figure it out."

The list of queries goes on: bird-window impacts, rattlesnakes, fawns, coyotes, bears, the proliferation of rabbits, and rubber rabbitbrush. Seasons change, and the questions do, too. But Ryon has answers—he's been preparing all his life after growing up in a small Illinois prairie town. 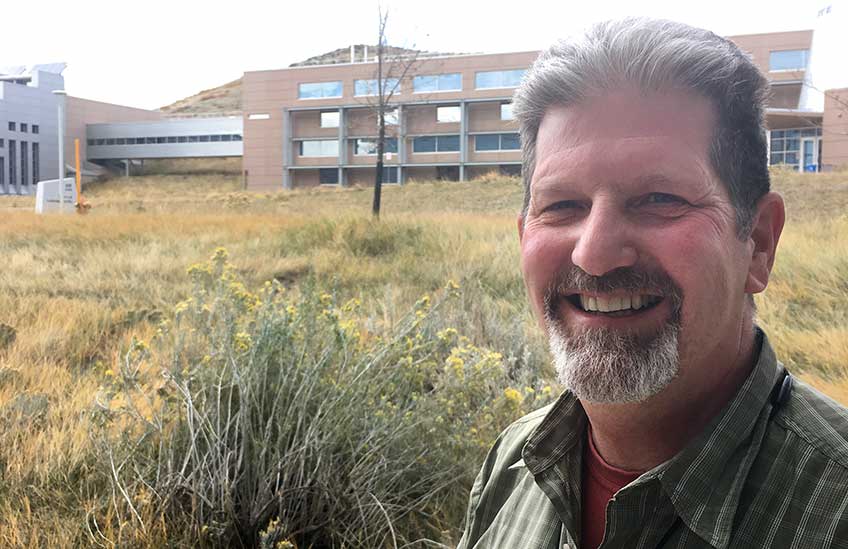 NREL’s campus is very sustainable, filled with native vegetation—the accomplishment of many, including Tom Ryon. Photo by Ernie Tucker, NREL

The Wilds of the Prairie

"I knew in high school that I wanted to be a wildlife biologist," Ryon said. He attended plenty of summer camps to further his biggest pleasure: getting outdoors and seeing wildlife. After high school he applied to Colorado State University (CSU) to study wildlife biology. While he was chasing his dream by learning science, population dynamics, and wildlife management techniques, CSU professors were warning of long odds. "We were often told that two-thirds of us weren't going to get jobs, Ryon said. "But for me it was such an inner yearning thing—I couldn't not do it."

The professors proved correct in the short run—until a mentor advised him to look into the precarious existence of Zapus hudsonius preblei, more commonly known as Preble's meadow jumping mouse, a tiny rodent found only in Colorado and Wyoming.

He jumped at the chance.

Ryon went into a straight biology/zoology focus to study the species. "I learned everything I could about this little critter," he said. "They live along rivers and streams—and are an indicator of really high-quality habitat in riparian zones and adjacent uplands." He wrote his master's thesis on the species' disappearance, and his paper was included in the successful 1998 effort to get the rodent added to the U.S. Fish and Wildlife Service's (USFWS's) threatened species list.

Because of Preble's misfortunes, however, Ryon's personal fortunes shifted for the better. He became known as an expert. Local companies began seeking him out to consult on projects and evaluate potential disruptions to the shrinking mouse habitat.

But after more than a decade of consulting—going from site to site for short visits—he longed for a deeper connection to the land. As it happened, in 2009, NREL was looking for a senior environmental specialist and wildlife biologist. They didn't have to look far for a prime specimen. 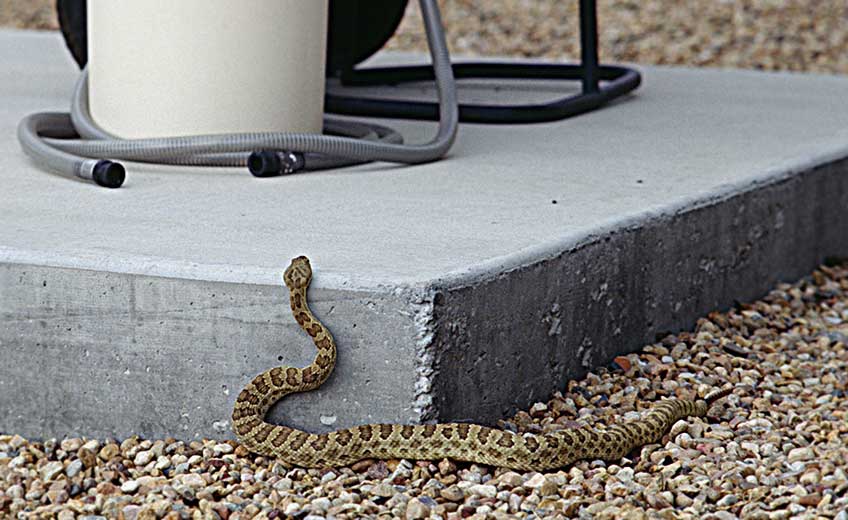 Rattlesnakes are part of the wildlife mix on the NREL campus. Photo by David Parsons, NREL

"The opportunity here to be in the support part of NREL and to be able to work at the wind site and the campus and to get very familiar with the properties and help manage them—that's a home run for me," Ryon said.

Since joining the laboratory, a major accomplishment was being part of a drive to reduce bird strikes with NREL buildings, an effort both DOE and USFWS have highlighted.

And as anyone who has spent much time on the NREL campus knows, rattlesnakes slither in and out of employees' consciousness. Several years ago, management asked the NREL office that deals with the laboratory's environment, health, and safety to check all doors and cracks, and then collaborate with facility managers to fix potential gaps.

"We've noticed a great decline in the number of snakes in buildings once things were sealed up," Ryon said. There are still times, however, when employees report snake sightings. When that happens, security personnel work with Ryon to relocate the reptiles. "Security does the heavy lifting," he said. He has moved snakes himself only twice. He wasn't scared, "but I showed the rattlers a healthy respect."

Much of his work remains behind the scenes. Ryon is often busy performing National Environmental Policy Act reviews when NREL needs to start a new project or build a new structure. Then there's managing noxious weeds or keeping an eye on habitat quality or cultural resources.

But there are always surprises—and one of the biggest since he's been at the laboratory involves studying bats.

Though there aren't many bats on NREL's main campus in Golden, Colorado, they are plentiful at the National Wind Technology Center (NWTC) approximately 30 miles north. "Before I started at NREL we had very little information about bats at the NWTC," Ryon said. "The wind industry has concerns with wind energy production and wildlife, including bats. We need to understand the species we have and when they are here. Some bats migrate; others hibernate on-site or nearby."

Starting around 2013, Ryon was able to purchase monitors, running them year-round at the NWTC, to track bats and turbine interactions. "I collected data and ran it through the software that produces the results," he said. "Now, we know a lot about the bats"— migratory tree bats as well as all the others. Both are key to the environment, gobbling bugs. "We'd notice if we didn't have them," he said. 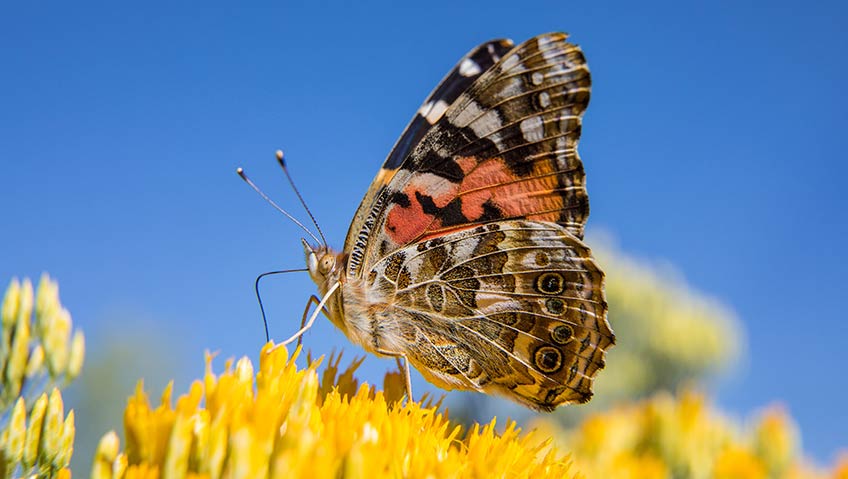 Looking out over the campus, Ryon sees a tapestry that others may not. The subtle differences of grass colors along walkways: saltgrass—planted because it can withstand road deicer—gives way to Little Bluestem, then other native grasses. The tufted rubber rabbitbrush gives the land a yellow-orange tint—and is a great pollinator plant, helping insects such as the painted lady butterflies that cruised through the area last year.

"A lot of people have put in sweat and tears to get the campus to look like it does," he said. "I was just a small part of that. Our campus is very sustainable—doesn't take a lot of water to keep going—and most everything you see is native. That's why we have the wildlife you see."

Raptors—from hawks to Great Horned owls—all "make a good living here," he said, "which tells me things are in good balance. Coyotes and deer are also part of the natural cycle. We manage here and there, but let nature take its course most of the time."

As Ryon stood surveying the land on a fall afternoon, it's pretty clear where he stands in terms of desiring contact with nature. His smile says it all—because he is outdoors, his natural environment.