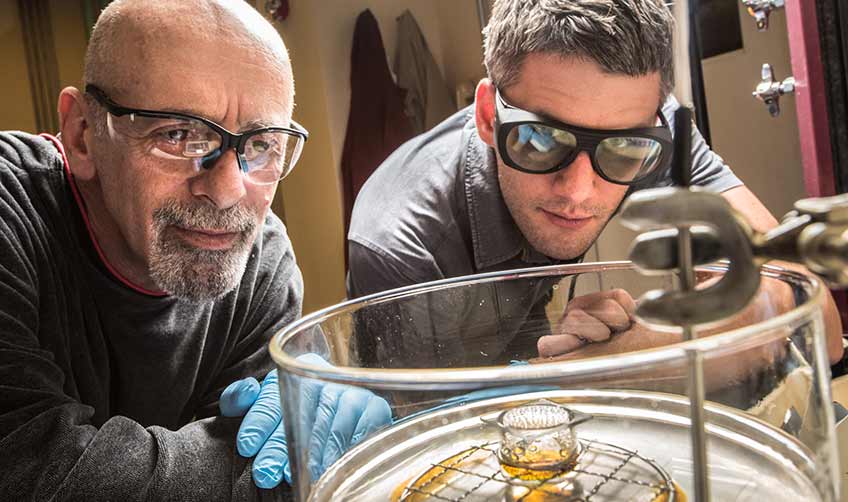 Beginning college as a 40-year-old might be considered a disadvantage, but U.S. Department of Energy National Renewable Energy Laboratory (NREL) researcher Dave Moore didn't see it that way. Instead, he thinks it gave him an edge, starting as a seasoned freshman at the University of Washington.

"You have the advantage of being memorable. Professors and speakers remember you. There are no real disadvantages," he said. "Well, my memory was not as good—but my organizational skills and focus were better" than students half as old, Moore said with a laugh. "The energy of academia is awesome and contagious. It keeps you young to hang around young people and keep learning."

Although he'd had a checkered high school academic career prior to stepping on the college campus, he fit right in. His decision to pursue chemical engineering was strategic. "I didn't know if I'd be good at school, or continue on to get a Ph.D., or be a scientist. So I wanted a degree that would be marketable. Chemical engineering is the most marketable engineering degree," he said.

By that point in life, Moore wasn't particularly worried about his ability to learn. He has always been good at figuring things out, but he did so in his own style—which often involved trial and error. "There's an adage: Good decisions come from experience. Experience comes from bad decisions."

Indeed, Moore piled up plenty of experience along the way to becoming a researcher: He loaded shipping containers on a dock, drove trucks, worked in a warehouse, managed a Domino's Pizza, and ran a bar, among other things.

His first big experience, though, was in music.

Early Days as a Jazzy Guy

Moore grew up in then-gritty Sacramento, California, the youngest of three boys whose single mom was also a student. "We weren't below the poverty line, but we could see it from our house," he said. Moore went to inner-city schools. "I was a horrible student. I thought I'd be a jazz cat and just hang out with Miles Davis, so I didn't care about academics."

The adage about bad decisions proved true for him. "I wasn't that good at music," he admits. Upon graduation, with a less-than-gaudy 2.8 grade point average, Moore found that he needed a job, so he enlisted in the Army. Even though his test scores would have allowed him to become a helicopter pilot, "I wanted to be a mechanic because I figured I'd learn to fix my car and save money," he said. "I didn't figure that I could make enough money to pay someone to fix my car." Instead, Moore was assigned to signal intelligence, working on encrypting and decoding transmissions. "I got some marketable skills out of it."

Eventually, he drew on that foundation to design lighting control equipment for functions such as dimming systems, switching, building management, and daylighting controls—turning off lights in response to available daylight. "As part of that, I needed to know about energy markets and global energy demand," Moore said. "That's where I first learned about the energy crisis." And that's when he first heard about NREL, while reading a paper by Art Nozik, now a senior research fellow emeritus.

Nozik's paper noted that the way to penetrate the energy market was for photovoltaics (PV) to increase in efficiency or be lower in cost—or some combination of both. "I'd never thought about that," Moore said. "I decided to go the science route. My dream job would be to get a Ph.D. and become a staff scientist at NREL."

At the time, he was running a boutique software company. "Then, I got bored. That's what happens to me. I didn't know what to do. I thought about what I wanted to do next, and decided to go to school." After selling the software company he'd started, he took a long cruise in the South Pacific—then began college. 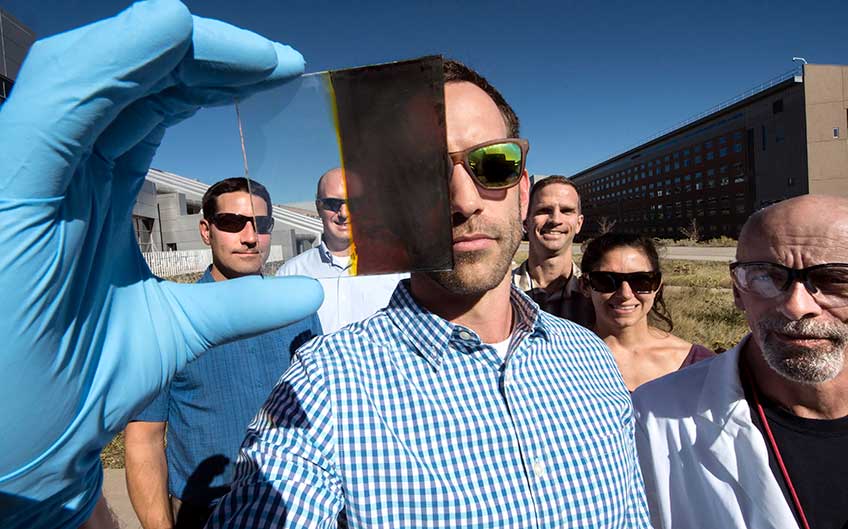 The Material Path to NREL

Moore was up for the challenge of higher education, egged on a bit by an adviser who suggested he might not be good enough to hang with elite students. Whether intentional or not, the professor's strategy worked. When he suggested that Moore might not fit into a quantum physics class or be part of a research group, it fired Moore up. "I'd say, ‘I'm not dropping your class. I'm not going anywhere else.'" When he graduated in 2009, Moore had compiled an impressive body of work—including publishing a paper and being part of a patent. Confidently, he headed to Cornell University to pursue his Ph.D. Again, his experience led him down a new path.

Now deeply engaged in perovskite research, Moore initially tackled quantum dots—but things were tough in the lab. "Quantum dots don't like me," he said. "Any scientist who tells you science is completely pragmatic and empirical and fixed in nature is lying to you. There is an art to it. In fact, there is a personality to it. Some science likes you, and some science doesn't. I could not get a single experiment to work with quantum dots for a year and a half." Then, in 2012, through Henry Snaith, a pioneer of thin-film perovskite solar cells, Moore learned about this promising solar material. "When I switched over to perovskites, 90% of everything I tried worked. Perovskites just like me better."

By the time he completed his Ph.D. in materials science, Moore was "the only one on campus looking at perovskites. It was still this outlying technology that people weren't sure yet was going to make it." To further his study, he did a six-month research fellowship under Snaith at Oxford before realizing his aspiration by coming to NREL on a Director's Fellowship in January 2016.

Perovskites and the Future of PV

Perovskites still like Moore—and he's fond of them, too. He's also fond of NREL's perovskite researchers. "The team here should be an example for any other general research areas. I'm sure there are other groups here that are similar to the perovskite team, but on our team—the distinction between bosses and employees is pretty blurry. Nobody's staking their claim. There's no territorialism."

He notes that the perovskite principal investigators—Joe Barry, Joey Luther, Maikel van Hest, and Kai Zhu—all have graduate students and postdoctoral researchers, and all are part of the effort. "Everyone gets in a room and says, 'What's the right thing to do next?' It's pretty cool in that respect."

The progress has been impressive. "Perovskites absorb sunlight very, very strongly. You can make the thinnest layers of any of the many PV technologies, and still absorb light." All of this promise leads to what Moore calls his bold statement: "I believe that perovskite technologies are going to be the future of PV, and probably the future of most optical electronics. Twenty-five years from now, the bulk of the market share being produced for PV will be perovskites. And 50 years from now, silicon will be used for computer chips, and basically nothing else because perovskites work for PV, for photodetectors, LEDs, and lasers. It is a really interesting material."

To evangelize the possibilities, he's created an award-winning demonstration that allows visitors to paint perovskites—anticipating a time when service providers might roll up to houses and turn any surface into PV, spraying the perovskites on wood or brick. "If I didn't think that, I would be working on whatever material I thought was that material. Right?"

When Moore, who converted to staff scientist some months ago, is not researching this Moore-friendly material, he does have his music—playing guitar—and also joined one of NREL's curling teams. But his commitment to change in the environment is foremost. "I want people to stop burning oil to make electricity. I want the fastest route to do that. I want to be working on a job that I think will be the most helpful in enabling that kind of solution."

And yes, he did meet Nozik here, one of the many reasons he enjoys the laboratory. Everything continues to click for the collegiate late-bloomer. As Moore said, "I work on perovskites because I think that's it. I could be wrong. Until I know I am, I'm going to keep going as if I am right."