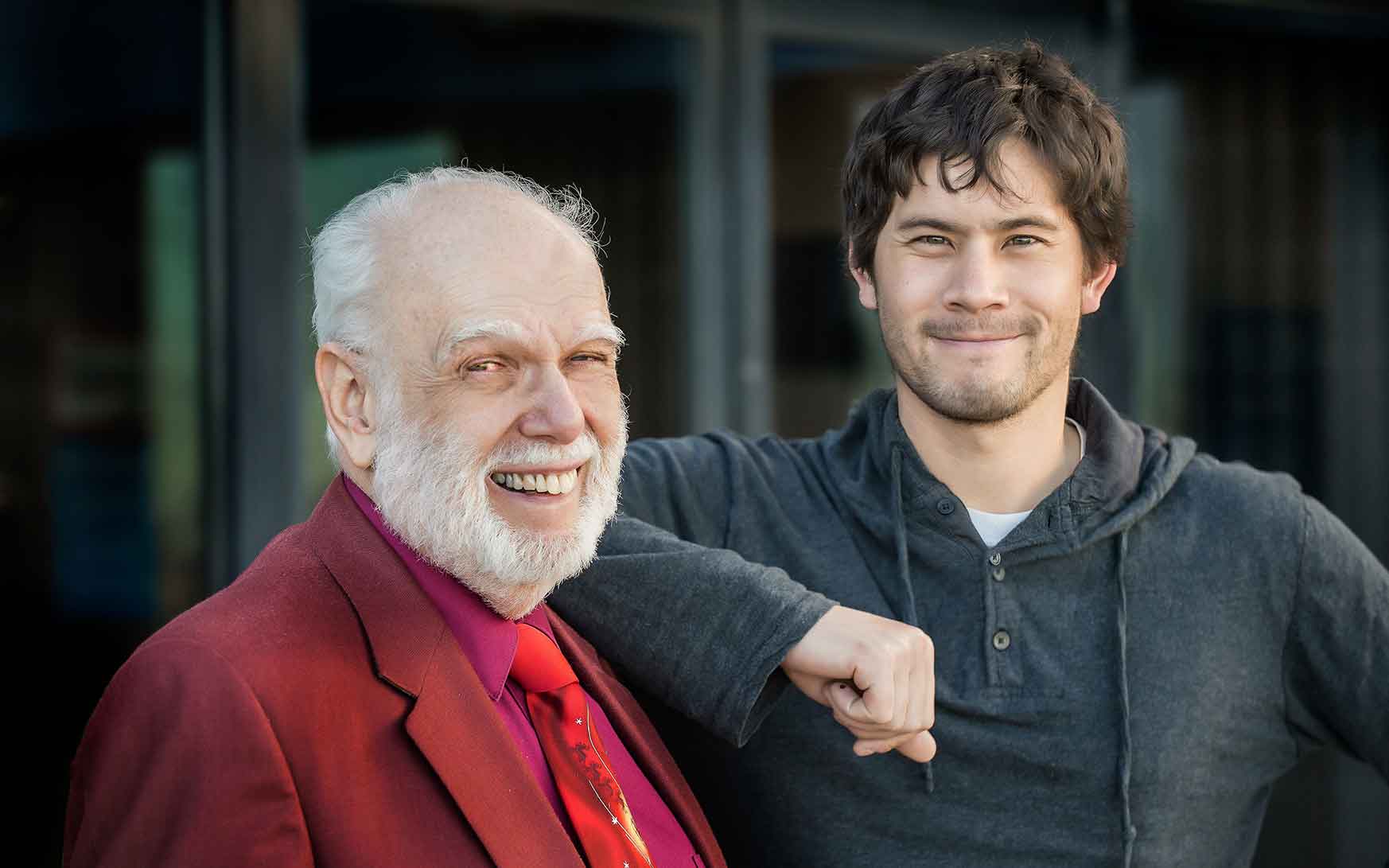 The global oil embargo in 1973 helped launch a career in renewable energy for Bob Thresher, a research fellow with the Energy Department’s National Renewable Energy Laboratory (NREL). “I sat in the gas line for five or six hours as many other people did,” he said. “I just didn't see any reason why we should be dependent on other people. It seemed like we should be able to generate our own energy one way or another.”

A mechanical engineering professor with Oregon State at the time, Thresher experienced a “kind of a catalyst. I vowed that the first opportunity I got I was going to try to do something about” energy independence. He didn’t have to wait long—it was around the same time his blood pressure spiked that U.S. interest in advanced energies was rekindled and organizations such as the Energy Department and the Solar Energy Research Institute (SERI, the laboratory that would later become NREL) were formed.

Thresher had grown up in Tulsa, Oklahoma, at the center of the oil patch and had been in high school when the Russians launched Sputnik. He first used his mechanical engineering degree to work on the Saturn booster for the Project Apollo moon shot—but was ready for the next global challenge. He volunteered for an Oregon State effort to find out if there was enough wind to warrant building wind turbines (then called “wind machines”) on the coast—and when he received an offer to join SERI, he jumped.

“I was absolutely insane” to come to SERI, he half-jokes, calling his decision “heart-over-head.” Yet to him it made sense. “I like things that are high-risk. They're a lot more fun when you don't quite know what you're doing. That's where I like to work.”

He arrived at the laboratory in 1984, a time when things were uncharted. SERI was given only a very small piece of the wind program to work on. Ideas were percolating. “It was all inventors and people with ideas.” That remains a constant. “Even today, [devices] are being reinvented. There are all of these great ideas that people come up with,” he said.

Thresher felt SERI was the place to be for wind energy research because of the freedom. He had to figure out new approaches in those uncertain times when jobs were being consolidated. “If I did anything, I guess, I came in with a fresh look. And we kind of evolved away from the big machines and started working with the embryonic small-wind industry [using 50-, 100-, and 200-kW turbines], which was building wind farms in California.”

Wind research was picking up in the last quarter of the 20th century. The National Science Foundation had put some solar and wind teams together in the mid-1970s, and Thresher had played a part. He knew of energy trends, and was aware of studies by companies such as GE and Boeing indicating that larger-size wind turbines would be more economical. The National Wind Technology Center (NWTC), which started in 1977 along with SERI and would later become part of the laboratory, was just gaining traction.

The problem at that time, Thresher recalled, was that researchers were trying to build machines out of aluminum and steel, or even wood and concrete for the rotors. “It was very experimental, and we really didn't understand the fatigue damage. We didn't understand the dynamic loads very well, so we had a fair number of machines that had problems,” he said. To overcome this, researchers ran early computer simulations with code borrowed from the helicopter industry—but this data continually underestimated the actual loads that they were able to measure on the turbines.

“We helped industry apply the new data to those machines to get better predictions,” Thresher said. “Here at NREL we also worked on atmospheric models, fatigue models, and advanced electric generators.” In the mid-1990s, global investment was picking up, and companies and government programs were starting to push wind energy technologies. Some companies failed; some were bought up. Still, Thresher continued to promote wind energy by speaking at conferences and collaborating with Europeans through the International Energy Agency Wind Energy Agreement. 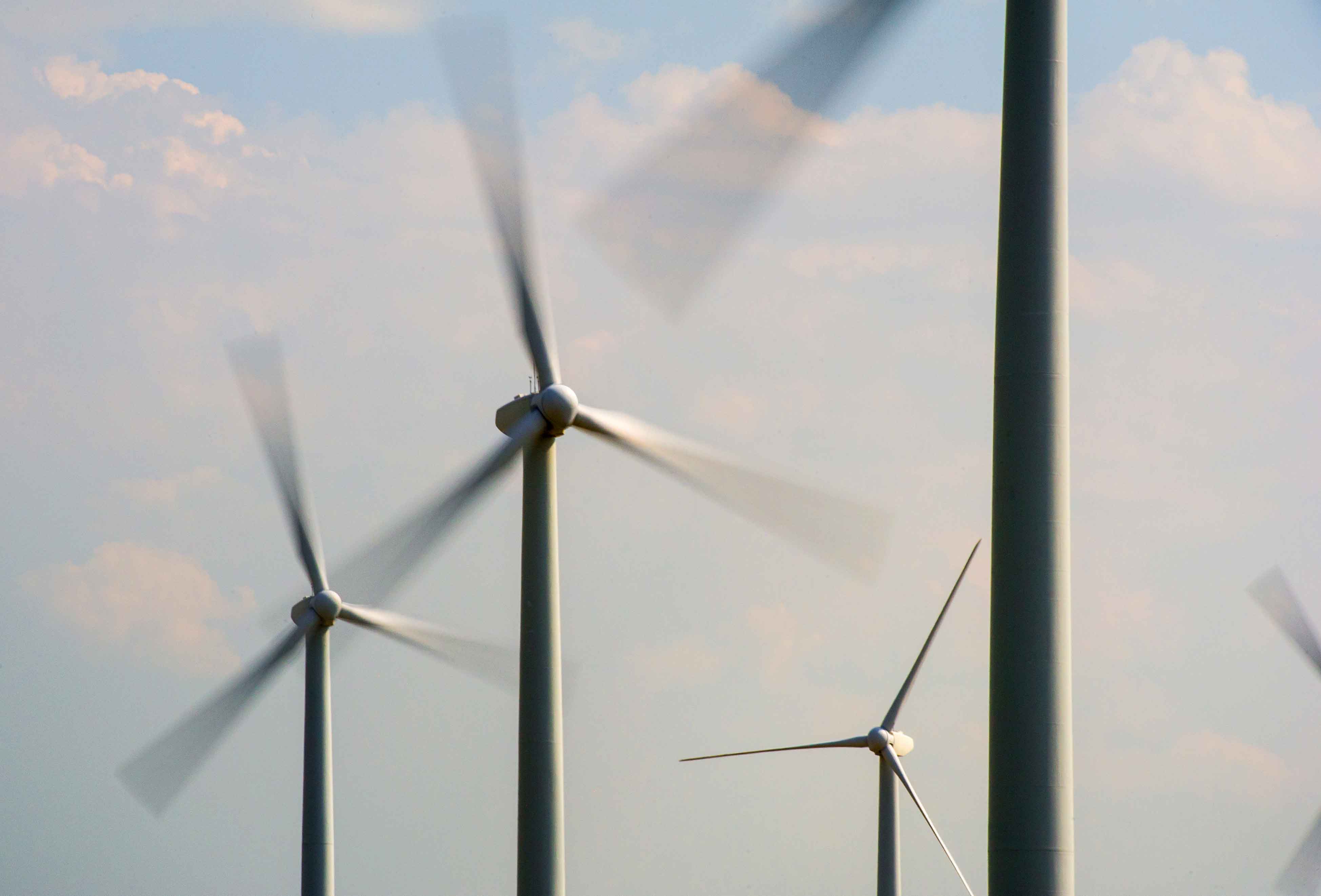 Utility-scale wind turbines at the Cedar Creek Wind Farm in Grover, Colorado, are examples of progress in the industry. Photo by Dennis Schroeder, NREL 31744

Personal Challenges and a Passion for Work

While Thresher doesn’t dwell on it, he has faced adversity during his career. At one point in the ‘90s while serving as director of the NWTC (a job he held from 1994-2008) he faced some significant health challenges. In 2001, things were looking so bleak that the American Wind Energy Association recognized him with a lifetime achievement award. Through it all, Thresher tried to stay engaged. “I missed being at work, and really wanted to be there,” he said. He donned what would become his trademark black cowboy hat. “I was told to keep out of the sun. Also, at the time, my forehead was growing—just like my father’s had—so I thought I looked better in a hat than I do getting a reflection off my head.”

During that time, with colleague Walt Musial and others, he became involved in laying the groundwork for the growing water power industry. “I was interested, because it was new technology. Nobody had devices that were really fully commercial at that time—and that’s still true,” Thresher said. “Tidal power is basically a wind turbine, but the fluid’s different—the density is 800 times greater, current velocity is lower—but starting with a wind turbine as the basis, we can get to tidal turbine technologies pretty quickly.” Thresher describes water devices as “underwater wind turbines.”

Eventually, the message got through, and in response to an Energy Department solicitation in which Thresher and Musial highlighted NWTC assets, the work was funded. The NREL water power team has grown to about a dozen researchers. A major contribution has been WEC-Sim (short for Wave Energy Converter SIMulator), the code for which was developed in collaboration with Sandia National Laboratories. 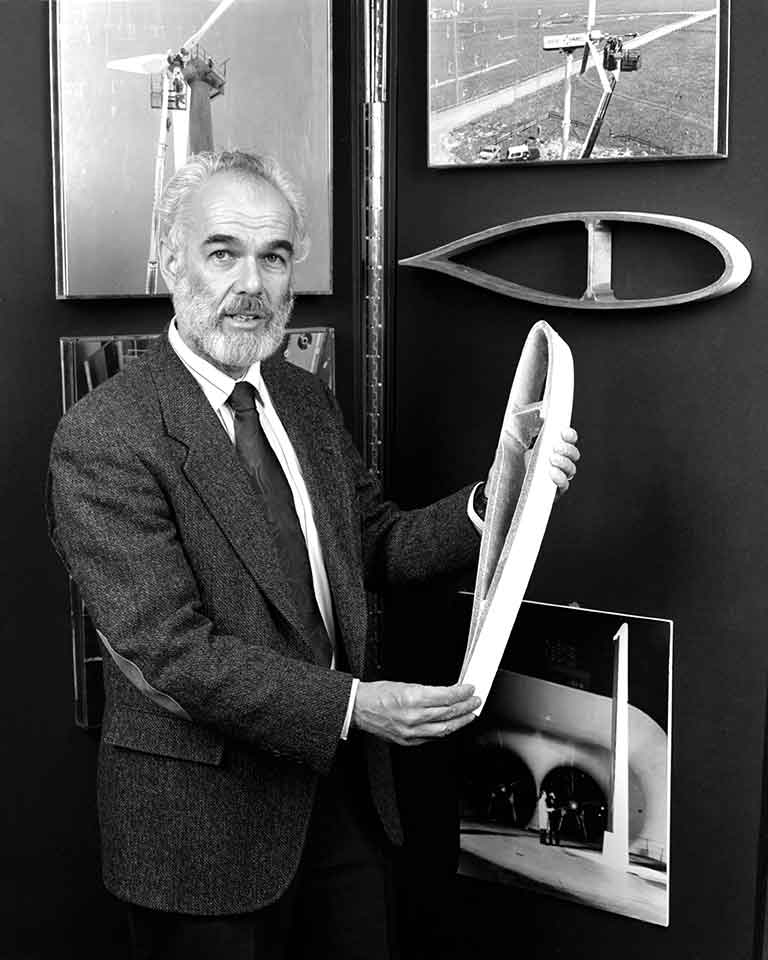 Thresher shows off a model of a wind turbine blade section in the early 1990s. Photo by Warren Gretz, NREL 9818

From where Thresher now sits—in an NWTC office with a view of the turbines and a neat candy jar he’s maintained for years called “Bob’s Bait”—he admits to some frustration with the pace of progress in the industry, but acknowledges that huge strides have been made. He noted, for example, that there has been dramatic progress in terms of rotor control and blade size. “I never thought we would get to turbines that were over 1-2 MW, and now we're talking about 5-10 MW—very large rotors. The surprise has been that we could actually manage the loads and build reliable equipment at that kind of a scale.” He sees innovations such as blade segmentation as possibilities. Researchers are exploring ways to make them in two parts and then either glue them together in the field or bolt them. Another option is to fabricate the entire blade on site in a movable blade plant.

As the landscape has changed, so have approaches at the laboratory. “The issue now in research is not about the individual turbine. It's about running a wind facility or a wind farm, and the way the individual turbines interact. The ones in front block the ones behind, and reduce the wind speed,” Thresher explained.

He said he believes NREL is still the place where these challenges will be solved. “I think the absolutely great thing about NREL is the people.” Young researchers inspire him. He likes to recite his motto: “I teach them old tricks, and they teach me new tricks.”