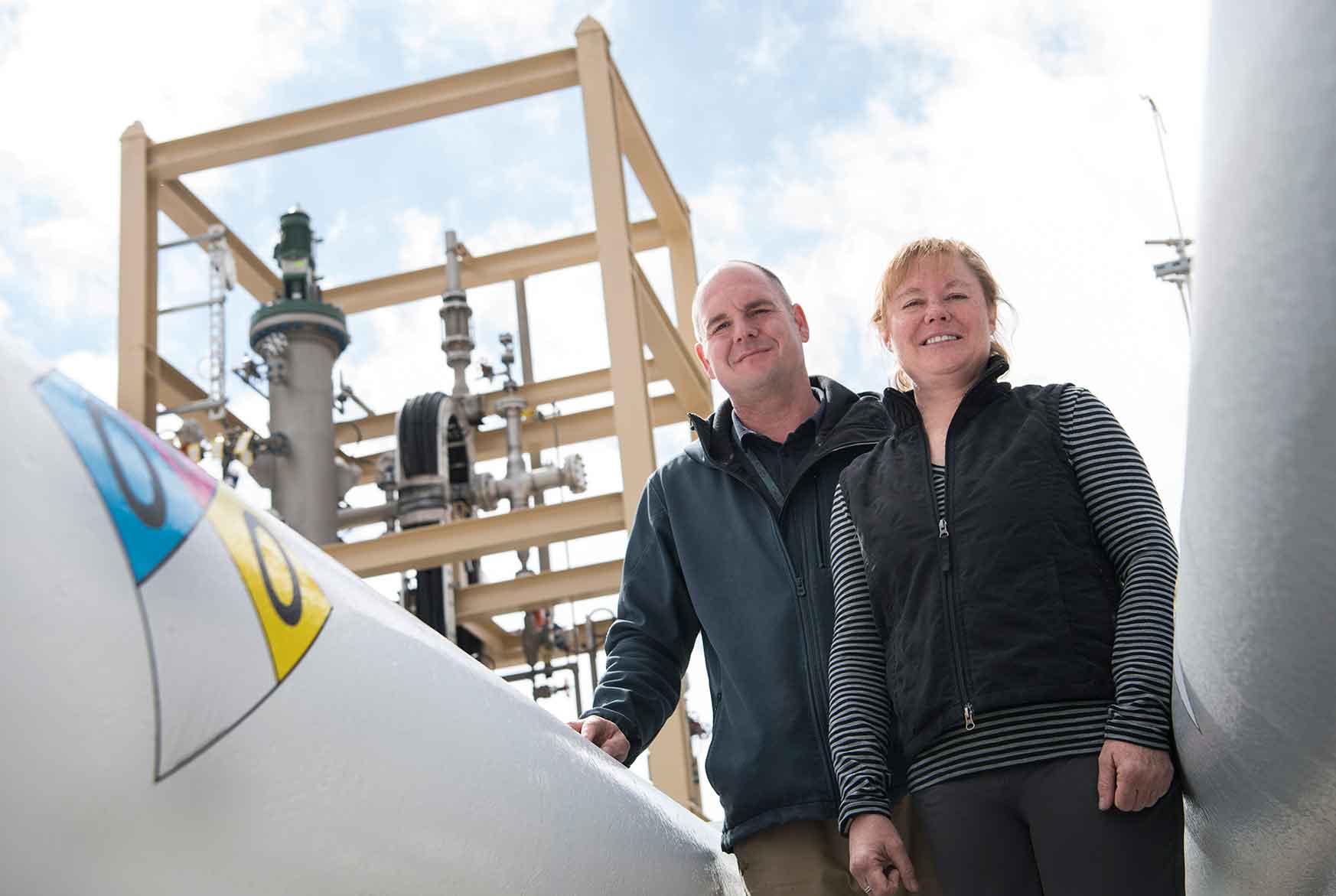 Kevin Harrison and Nancy Dowe standing next to a bioreactor housing microorganisms that will convert hydrogen and carbon dioxide into methane. Photo by Dennis Schroeder, NREL 47786

The interior of the newest addition to the U.S. Department of Energy's National Renewable Energy Laboratory (NREL) contains a murky mixture of a microorganism at home in the alkaline waters of an Icelandic hot spring that holds a possible solution to storing renewable electricity.

Installed outside NREL's Energy Systems Integration Facility (ESIF), where pipes carrying hydrogen line the exterior of the building, a 25-foot tall cylindrical bioreactor system will convert hydrogen and carbon dioxide into methane. The process relies on a heat- and gas-loving microorganism known as Methanothermobacter thermautotrophicus to accomplish that conversion. These bacteria prefer a hot environment; inside the bioreactor is about 150 degrees Fahrenheit. Room temperature, on the other hand, would freeze them and cause the microorganism to slip into a dormant state.

"It's amazing to think that these bacteria can reproduce and make methane in such an extreme environment," said Nancy Dowe, a fermentation microbiologist at NREL.

The selectively evolved and proprietary single-celled microorganism — researcher Kevin Harrison saves syllables by calling it a "bug" — forms the backbone of a power-to-gas (P2G) technology owned by a European company, Electrochaea. In collaboration with Southern California Gas Company (SoCalGas) the bioreactor system installation at NREL marks its first demonstration project in the United States using this organism. 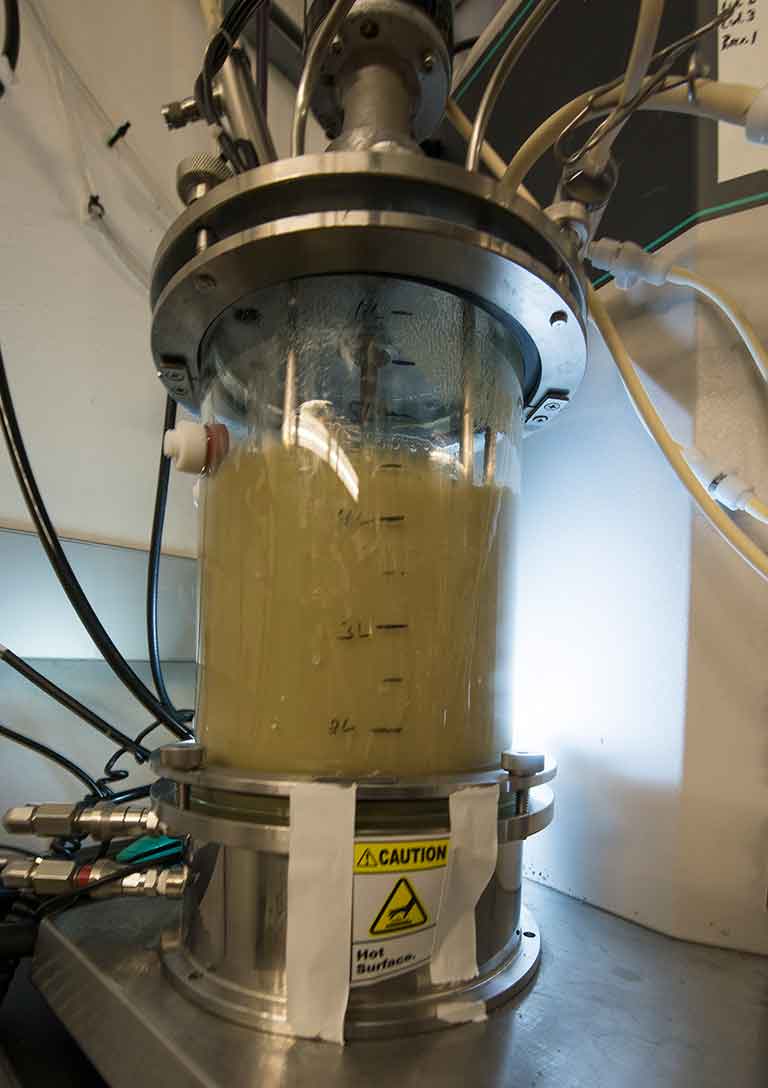 NREL's pilot scale bioreactor is fed hydrogen produced from a 250-kilowatt electrolyzer system designed, built and operated by NREL researchers. The bioreactor is also designed to operate at 250 psig (pounds per square inch gage), which is two times higher than its predecessor operated by Electrochaea in Denmark. The higher pressures aid in dissolving the hydrogen and carbon dioxide, making the gases more accessible to the bugs. The project is being undertaken via a funds-in research agreement with SoCalGas and the Solar Energy Technologies Office, with further assistance from the ESIF. The Department of Energy’s Fuel Cell Technologies Office supports the underlying electrolysis and hydrogen infrastructure that enables the project.

SoCalGas and other utilities in California are working to dramatically reduce greenhouse gases, in part by relying more on renewable sources such as wind or solar to generate electricity. For times when the wind's not blowing and the sun's not shining, the company wants to take advantage of the energy previously stored in the form of natural gas to meet demand. The first step of the P2G project splits water into hydrogen and oxygen, and then converts the hydrogen plus carbon dioxide into methane, the main component of natural gas.

"This is a viable, albeit two-step, approach for energy storage for renewables," said Harrison, NREL's principal investigator on the Power-to-Hydrogen-to-Methane R&D program. The measure of success for this project, he said, will be in the production of pipeline-quality methane from these biocatalysts following naturally varying solar- and wind-generated electricity powering the electrolyzer. The stored renewable methane can then be converted into electricity as demand warrants or consumed the same as any end-use of natural gas.

SoCalGas was looking for "a relatively small, inexpensive" way to make methane using a fermentation process and came across Electrochaea, said Jeffrey Reed, director of business strategy and development for the utility, which has about 21.4 million customers. Interested in knowing whether Electrochaea's technology could be matched with the variability that comes with electricity produced by wind and sun, Reed turned to NREL for the answer.

"In assessing new technologies, it is vital that we take a robust, intellectually honest approach," he said. "We want to subject our methods and findings to thorough peer review. Working with NREL allows us to do that."

The NREL experiment relies on hydrogen produced using an electrolyzer onsite that will be operated with variable power following a solar profile. Within ESIF, NREL can produce as much as 5 kilograms of high-purity hydrogen an hour. In addition, the hydrogen system at the ESIF stores more than 300 kilograms of gas at pressures up to 12,700 psig—some of the lower pressure hydrogen can also be fed into the bioreactor to help characterize the performance under varying conditions. Other hydrogen produced at the ESIF is used in fuel cell laboratories, and for hydrogen fueling infrastructure research, dispensed into the hydrogen-fueled vehicles and later this fall will be consumed in a fuel cell located in the High Performance Computing Lab to power IT server loads.

Hydrogen made onsite at the ESIF for fuel-cell electric vehicles and hydrogen infrastructure research requires drying the gas to less than 5 parts per million water vapor. Harrison said the drying process of the electrolyzer wastes between 3% and 7% of the hydrogen gas to regenerate the water-vapor-adsorbing desiccant. That additional process isn't necessary to supply hydrogen to the microorganisms in the bioreactor. "As long as it doesn't freeze, we can send 'wet' hydrogen into the bioreactor. That would come off as extra output water. Right there we could see about a 5% system efficiency improvement and that is significant."

The strain of M. thermautotrophicus that forms the heart of the experiment was isolated in a hot spring in Iceland and was selectively evolved in the laboratory of Laurens Mets at the University of Chicago to become more efficient at producing methane. An associate professor of molecular genetics and cell biology, Mets participated in a 2003 Energy Department project to overcome technical challenges to using algae to produce hydrogen from water. From there, he branched into studying methanogens, those microorganisms that use hydrogen to reduce CO2 to methane. His variant of M. thermautotrophicus is able to produce at least 96 molecules of methane for every 100 molecules of carbon dioxide. Mets, who holds a patent on the strain and the process, licensed the technology to Electrochaea and serves as a technical adviser to the company.

Experiment Brings Biology into the Mix

Harrison and Dowe visited Electrochaea's offices in October 2016, spending time with their researchers in Copenhagen and Munich. An informal yet important partner on the project, Electrochaea provided Dowe with samples of the microorganism. Dowe, along with fermentation microbiologists Lauren Magnusson and Holly Smith, will grow the bugs in a laboratory-scale bioreactor, to accumulate sufficient culture for the full reactor inoculation. The larger bioreactor system holds roughly 700 liters of liquid (or about 200 gallons); about 10% of that will be initially filled with the culture produced by the small fermenter under Dowe's supervision.

NREL's bioreactor will be operated differently than Electrochaea's. While the company's demonstration facility in Denmark feeds the microorganisms CO2 (and some methane) produced by a wastewater treatment plant, NREL intends to use bottled carbon dioxide during this demonstration.

"It's a really interesting project for me," Dowe said. "I really like the biology element because the biocatalysts are completely renewable. You can keep these cultures going as long as you're supplying them CO2, hydrogen, and whatever nutrients they need. It's a self-replicating catalyst, and it's exciting to use biology as an energy storage solution."

Dowe works in the Integrated Biorefinery Research Facility (IBRF) and until now hasn't had a reason to conduct any research at ESIF, nearly a half-mile away from her laboratory. She found herself pulled into the project more than a year ago while serving as NREL's biosafety officer, when she was tasked with reviewing plans to bring a new microorganism onto the campus. Dowe began operating a 5-liter bioreactor in late July at ESIF to grow enough microorganisms for commissioning the larger reactor, which had to be lowered into place by a crane. With the project now underway, Dowe can spend more time in her own laboratory. "The microorganism is pretty stable so once you get it in the vessel and get it started, there's not a lot I will have to do," she said.