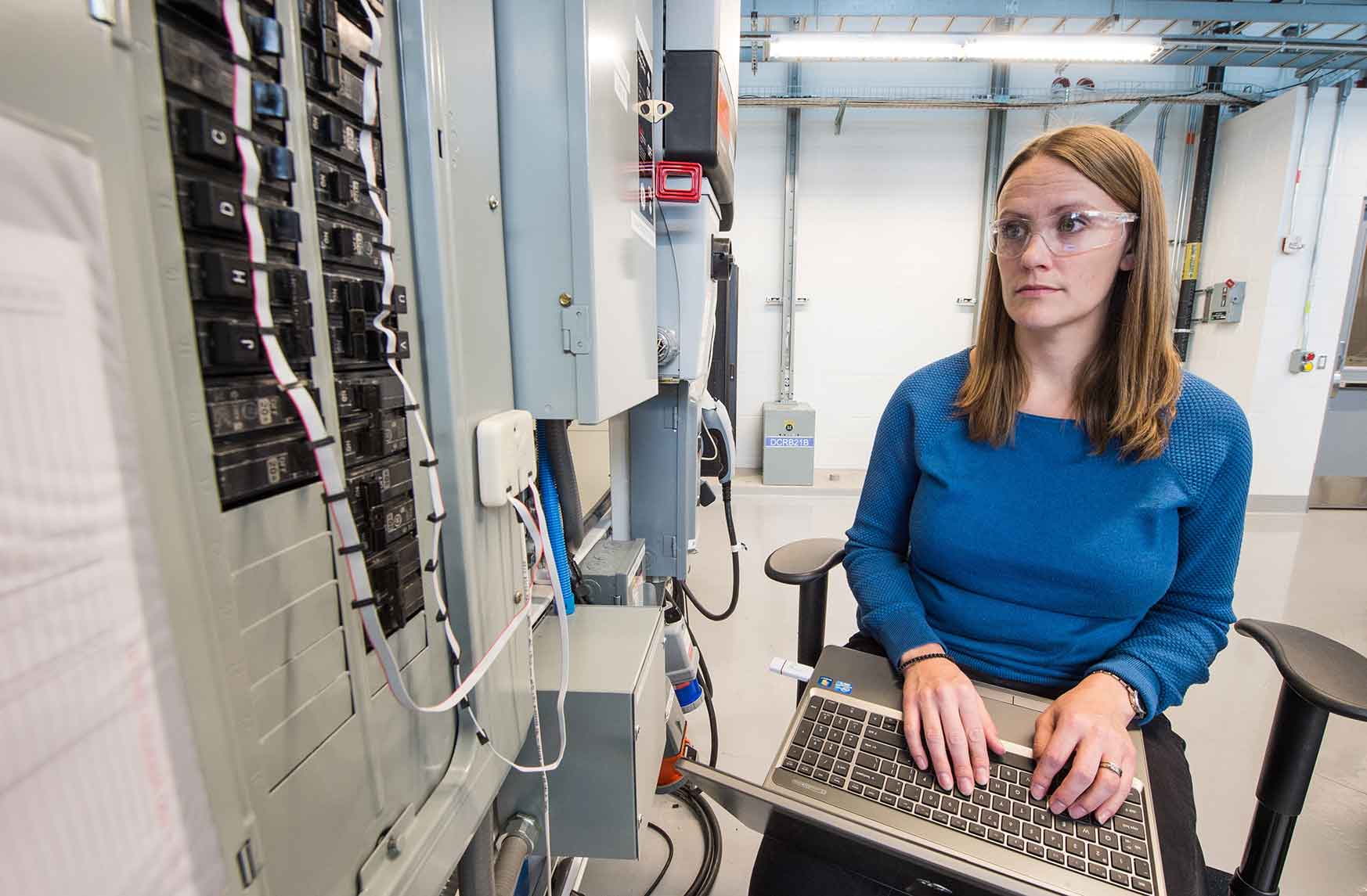 When researchers at the Energy Department's National Renewable Energy Laboratory (NREL) helped install a peel-and-stick energy-metering system in a Wells Fargo branch bank, they weren't sure exactly what they would learn.

After all, the system from Whisker Labs—an Oakland, California, startup—was the first "beta-ready" technology to emerge from the Wells Fargo Innovation Incubator (IN2). As part of the five-year, $10 million program, select companies that have successfully met technical project-based milestones in the laboratory have the opportunity to test and demonstrate their products in a real-world environment within Wells Fargo's commercial real estate portfolio. The June 22 pilot installation at a branch in Aurora, Colorado, was designed to allow NREL to evaluate technology performance and demonstrate the benefit of this less-invasive submetering system in a commercial building.

"We wanted to see how it performed under real-world load profiles versus how it did in the lab, a unique opportunity as part of the IN2 program," said Meghan Bader, a program manager with NREL's Innovation and Entrepreneurship Center.

In the midst of the beta demonstration, Earth Networks announced on December 5, 2016 that it had acquired the startup. The company, which operates the world's largest weather observation networks, will create a new division for the energy-sensing hardware and software infrastructure.

The successful exit affirms the purpose and value of the incubator.

"Through the IN2 program we were able to successfully test the technology within the NREL Systems Performance Lab," said Richard Adams, director of NREL's Innovation and Entrepreneurship Center. "Using NREL's laboratory, we were able to characterize the performance of the 'stick-on' power meters with typical appliance loads. The accuracy of the measurements relative to reference meters indicates potential suitability to applications such as measurement and verification, as well as fault detection and diagnostics of building equipment." 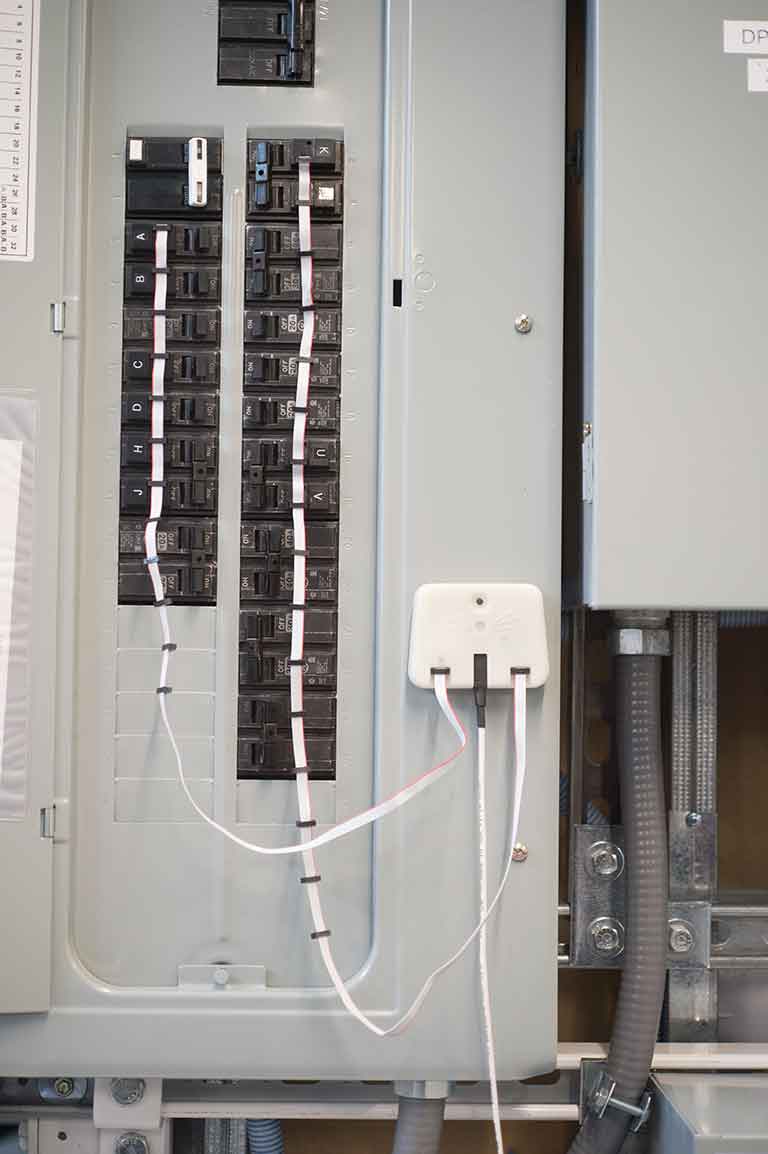 Launched in 2014, IN2 is funded by the Wells Fargo Foundation and co-administered by NREL. The initiative fosters and accelerates early-stage commercial building technologies; Whisker Labs was among the first selected for the program.

The Whisker Labs meter was a good fit because existing submetering systems use direct measurement, which requires the installation of current transformers (CTs) and voltage sensors. They are much more costly than Whisker Labs' indirect sensors and also require skilled technicians to install and monitor them. By comparison, Bader said, "a lay person can install the Whisker technology," simply by applying it to the outside of a circuit breaker.

Steve Frank, an NREL commercial buildings engineer, was part of the team that worked with Whisker Labs in the Systems Performance Laboratory prior to the beta deployment. He has been impressed with the progress of the device. "It's what you want to see in IN2, when something goes from lab testing prototype phase to the field testing phase as the company improves its product," Frank said.

Speed and Ease of Installation

Once in place, the sensor indirectly measures voltage and current by monitoring the electric and magnetic fields around a circuit breaker. The system then uses a proprietary computation to determine what the power is within the circuit breaker. It accomplishes all of this through the tiny, stick-on sensor connected to a hub that, in turn, connects wirelessly to the internet.

As a demonstration of the speed and ease of installing this new technology, Frank and others placed the sensors before conventional submeters were installed in the Aurora branch facility. The time saved was significant. Even including training for half a dozen people, the team was able to cover 34 breakers in the panel with sensors in 30 minutes.

In contrast, it took a licensed electrician more than three hours—working in the dark with flashlights because electricity had to be shut off—to install conventional submeters with CTs for only nine breakers. During that time, there were disruptions at the bank, including the fact that the cleaning staff couldn't complete their normal duties.

While both meters measure voltage and current—which helps determine a building's power consumption—there are trade-offs between the stick-on sensors and standard meters. Standard meters use direct measurement and, therefore, are more accurate and less susceptible to electromagnetic interference. Still, the Whisker sensors can provide valuable data.

"You have a qualitative idea of what is happening in all of the individual circuits," Frank said. "This is very useful for doing things like fault detection, optimizing schedules, checking that control set-points are working as intended—such as seeing things like lights dimming or fans going on—and that power usage is going down."

The demonstration is ongoing. "We have been able to test the sensors with some typical continuous commissioning tasks such as verifying proper lighting controls and holiday schedules," Frank said. Further analysis of the data is pending. 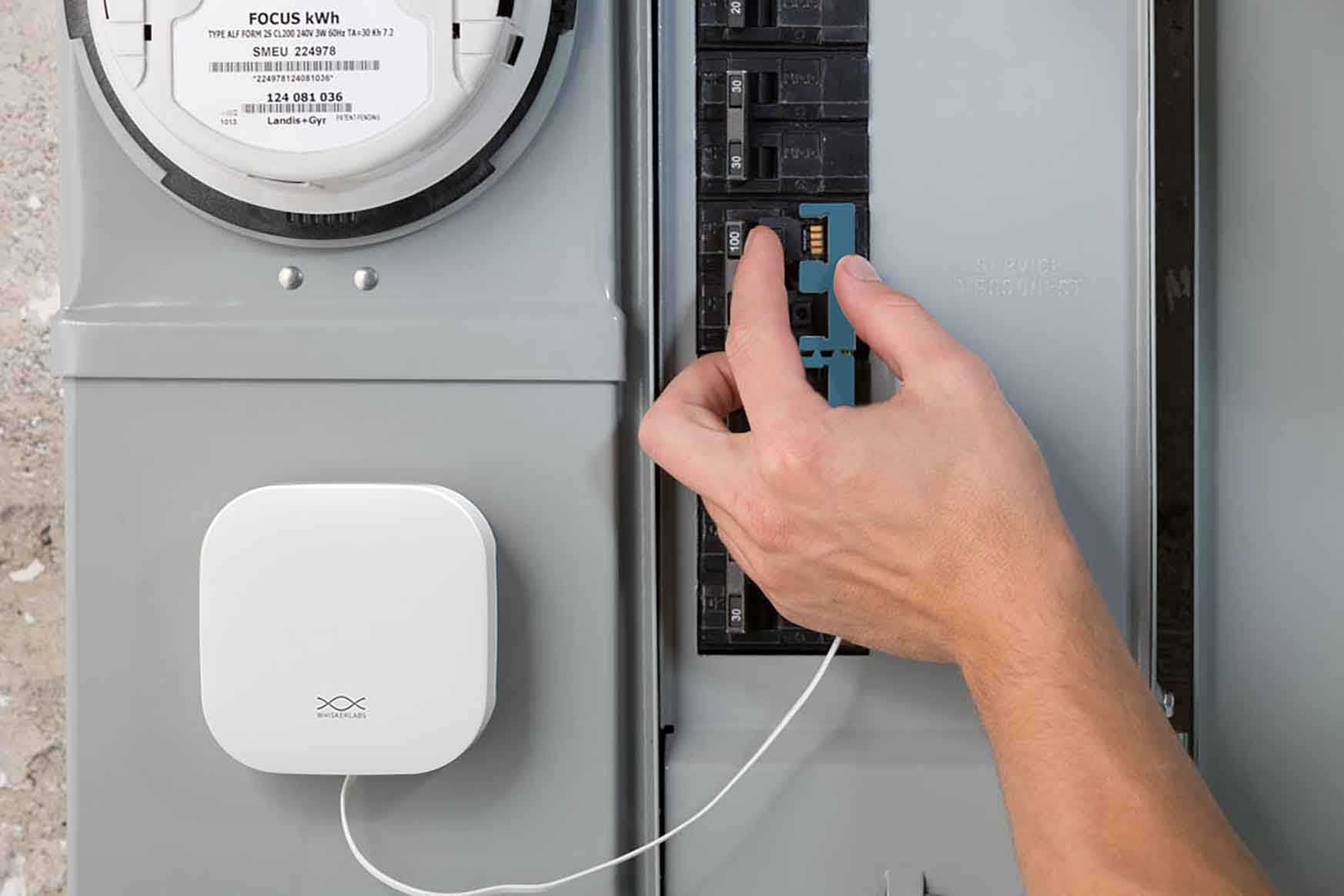 A worker installs a device as part of a test in a Wells Fargo branch bank in Aurora, Colorado. Photo courtesy of Whisker Labs

The Future of Whisker Labs

Ultimately, Whisker Labs' peel-and-stick technology could reduce energy-metering costs by 90% in commercial buildings—as well as the next-generation connected home. The information collected through the sensors and the company's data-management system can also be used by third-party energy information systems, which will provide building owners with insight into energy consumption and enable cost-effective energy savings.

According to Earth Networks, the new home energy monitoring device will be available to business partners such as utilities, solar and energy companies, home automation providers, and insurance companies in early 2017. It will be made available to consumers later in 2017.

The company said that a home intelligence platform will be affordable and easy-to-install, allowing users to affix a sensor to an electrical panel or breaker box for real-time measurement of appliance power consumption. Whisker will also provide insights into energy use and health of each home appliance through a mobile app.

"Today, every appliance and every device in the home is connected to the power network. The problem is, that network is not accessible and the power data it holds is locked. We are excited to open this power network and connect it to the internet through one simple device," Marshall said.

Frank and the NREL researchers are also pleased with the insights the technology can provide.

"This offers a high degree of visibility into what's happening inside a building's electrical system at a very low cost point with minimal time investment," said Frank. And through ongoing efforts, NREL is positioned to help gather information for further improvements and potential breakthroughs.

Learn more about innovation and entrepreneurship at NREL.